So the "steel" returned 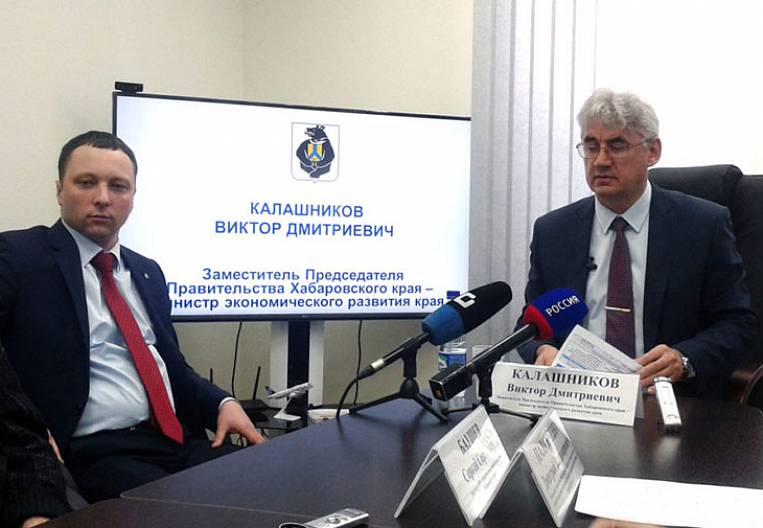 Circumvents as master Bulls are not in tomato ATB: bankrupt or not bankrupt?
All author's materials
Today, the Minister of Economic Development of the Khabarovsk Territory Viktor Kalashnikov held a press conference at the Investment and Development Agency of the Khabarovsk Territory. Everyone is on hearing The recent deal on Amurmetal, which finally bought Torex. Of course, this issue could not be avoided.

- A serious topic, for example, "Amurmetal". We all know its history, you already know the latest news that after all the investor in the established order came out with the corresponding offer. He made a deposit. This is the company "Torex" - famous, Khabarovsk. Just yesterday we already met - both with the company and with the investors of this project. And we understand, on the one hand, that serious work is on the other hand, it's good that such an asset purchase has taken place. Still very many questions on it are saved. But investors have put before us the question completely justified, what support package we can prepare for them. Just the TACER regime is one of them, the SPIC regime, the special investment contract is another. There may be other formats used.

I confess I could not resist the question that worries many.

And what about the debt in 35 billion rubles?

It is not often necessary to see how ministers smile at press conferences.
And Viktor Kalashnikov could not resist - he smiled:

"Duty is forgiven." The asset is realized for 2,46 billion. This is all that will get into the bankruptcy estate. This is all that creditors will receive, although there are pledge creditors, and more nuances. The acceptance of the offer was completed in 23: 59 29 January. By this time, "Torex" made a deposit. There will be no debts, and this will be a new venture.

Do you begin to fully realize what happened?

“As far as I know,” the minister continued, “the name Amurmetal is no longer possible. It will be excluded from the Unified State Register of Legal Entities. And the name, in my opinion, will be Amurstal. The historical name will be returned. Not bad in my opinion. But the debt is 35 billion rubles. - it will go down in history forever.

How did all the same exhaled in the government of the Khabarovsk Territory 29 January, I imagine. After all, the press service even posted the news on Saturday about the emergence of a strategic investor, do you understand? Gone debts on 35 billion rubles.

However, this pill has its own "bitterness".

- There is, of course, an acute problem of operational activity at this transitional stage, - said Viktor Kalashnikov. - You know what the situation is with payments - primarily for electricity. This is a very energy intensive enterprise. There are questions about heat and natural gas. Now the new owner and power engineers are finding certain models of interaction. And the regional government insists on this, there are certain accumulated debts, but the investor - he has something to do with them? And the fact that current payments are indisputable, they must be provided in full. Here the regional government is completely on the side of the power engineers.

And one more important nuance. I have clarified. Has Torex already paid 490 million in advance payments?

- Yes, this is the condition. Quite right, "said the minister.

And there was another joint-stock company in front of him - first OJSC, then OJSC Amurstal. Glorious past is not going anywhere. The initial registration of the JSC, judging by the Unified State Register of Legal Entities, took place on 05.02.1993/24.10.2005/XNUMX, the termination of activities - XNUMX/XNUMX/XNUMX. Due to bankruptcy.

This, however, legal subtleties. Universal interpretation On the website of Amurmetal Somewhat different:


How can one not remember the unforgettable ex-speaker of the Duma of Khabarovsk Krai Sergei Khokhlov. Which (I quote Publication in "TOZ" 2001 year): “From 1991 to 1996, he was the first deputy head of the administration in Komsomolsk-on-Amur. In May 1996, he was appointed arbitration manager of the metallurgical enterprise OJSC Amurstal. In 1997 he became the General Director of OJSC Amurmetal, which was formed after the bankruptcy of OJSC Amurstal.

Severely all the metallurgists.

The new investor - good luck and no-no-case-non-repetition of history. And the advance in the form of minus 35 billion - he has already received.