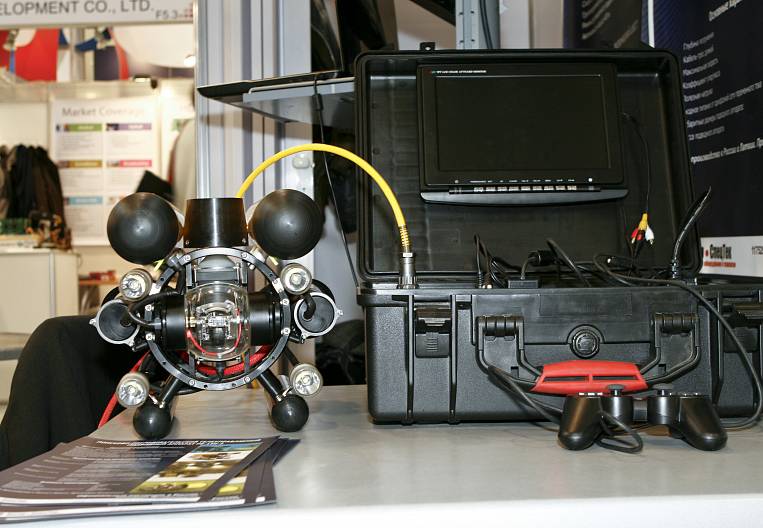 28 July at the International competitions among uncontrollable devices RoboSub-2014 in the American city of San Diego will meet the world's strongest robotics. Here, stand-alone robots will perform underwater a number of specific tasks without having a connection with the person on the surface. These competitions are compared with the Superbowl for engineers, and FEFU is the only Russian university that participates in RoboSub.

The Far Eastern Federal District has been dealing with robots since 2008. It was then that on the basis of the Institute for Problems of Marine Technologies of the Far Eastern Branch of the Russian Academy of Sciences (IPMT FEB RAS) the Scientific and Educational Center / REC / "Underwater Robotics" was established. During this time, the staff of the center have achieved brilliant success. Here, for the first time in Russia, a small-sized autonomous unmanned underwater vehicle (AUV) was created, which, according to its main characteristics (weight - 50 kg, transverse diameter - 200 mm, length - 1800 mm, maximum working depth - 200 m, maximum speed - 2 m / s and the duration of continuous operation - 10 hours) is not inferior, and in some (maneuverability) even surpasses the leading foreign counterparts (REMUS, GAVIA and Iver). Scientists have developed an architecture of a three-level programmed control system that implements one of the modern approaches for mobile robots.

Also in the walls of the institution was born a maritime autonomous robotic complex / MARK /, including autonomous uninhabited underwater and aquatic vehicles (ANPA and ANVA). The complex, which includes surface and underwater vehicles, is ahead of foreign samples in mobile navigation and is a very promising invention.

"The creation of autonomous marine robotic complexes of a new generation, endowed with elements of artificial intelligence, is important for the effective performance of various underwater technical works that support the tasks of exploration and development of the World Ocean, as well as the tasks of operative rescue operations. This direction throughout the world is recognized as important and relevant, - said EastRussia.ru Dr.Sc. Professor, director of the scientific and educational center "Underwater Robotics", corresponding member of the Russian Academy of Sciences Alexander Scherbatyuk.

According to him, conducting underwater technical works with the use of AUV without the direct presence of a person in the area of ​​operations will make it possible to abandon the use of large vessels and significantly reduce the cost of performing marine operations.

"The widespread use of autonomous uninhabited complexes completely eliminates the risk to life of personnel associated with the implementation of underwater exploration and rescue and rescue. Some tasks related to work under the ice or in shallow water can be solved only with the help of the ANPA ", - the expert shared.

In addition, as A.Shcherbatyuk noted, the use of modern intelligent ANPA improves the efficiency of performing survey and retrieval works - mapping of the bottom relief, monitoring the technical condition and safety of underwater pipelines and cable lines, surveying the bottom to plan laying of pipelines, cables and construction of bottom structures , Inspection of quay walls and bottom structures of port water areas, survey of offshore drilling rigs, exploration of minerals at the bottom and thicker ground A search and survey of sunken objects, search and rescue operations, hydrographic measurements and ecological studies, estimation of biological resources and the study of the biology of species of hydrobionts, protection of marine areas, etc.

On the basis of the scientific and educational center, a student team was formed, which adequately represents the university at the international level. Far Eastern Federal University is an experienced participant in international student competitions in underwater robotics and a recognized world leader in this field. In 2010 and 2012, the team of the Federal University became the absolute winner at the World Championship in Controlled Apparatus. In 2013, the autonomous robot of the FEFU students brought them the "bronze" of the International RoboSub competition among underwater vehicles and the victory in the Asian Open Championship.

This year introduced a copy of the FEFU students another victory. The team of the Far Eastern Federal University Primorye Coast took the third place at the XIII annual underwater robotics championship "International MATE ROV Competition 2014" in the USA. As a result of the assignment, FEFU students outstripped the teams of the strongest technical universities in Asia, Europe and America, and the passing of the mission by the underwater robot of the Federal University was recognized by the judges as the best.

FEFU at international competitions in the United States was represented by a team of students of the School of Engineering and the School of Natural Sciences under the leadership of the Director of the Scientific and Educational Center "Underwater Robotics" Professor Alexander Shcherbatyuk. Over the creation of a robot weighing in 23,5 kg young men worked for several months. At the competitions, a number of tasks were to be performed under the apparatus: examine the wreck, measure its size, determine the name and year of construction from the wreckage, collect and deliver to the surface man-made waste, take samples of the biological layer and measure the salinity of the water in the wreck zone.

Together with FEFU, Russia was represented at the World Championships by the Moscow State Technical University. N.E. Bauman and the Maritime State University. G.I. Nevelskoy, who took the second and fourth places respectively. The first to become representatives of Jesuit High School (California, USA). It should be noted that the group of leaders of the championship had a rather dense distribution of points: 523.00 - from the American team, 511.33 - from the University. NE Bauman, 506.17 - at FEFU, 461.17 points - at the Maritime State University. Fulfillment of the mission by the team of FEFU judges was evaluated for record 280 points (champions only 255).