NOVATEK, which announced in 2017 year plans to build a terminal on LNG transhipment in Kamchatka, has not yet decided on a site for the facility. Options for the investor is still two. Optimal for the authorities of Kamchatka, who need NOVATEK gas for local boiler houses, and for the investor - in the bay of Mokhovaya, right in the regional capital. The second site is the abandoned base of the Ministry of Defense in Bečevinka bay, where one must pull the infrastructure and from which it is unlikely to be able to take much needed gas for Kamchatka. What is more important for the investor, tax incentives or a convenient platform, and what has the submarine to deal with, EastRussia. 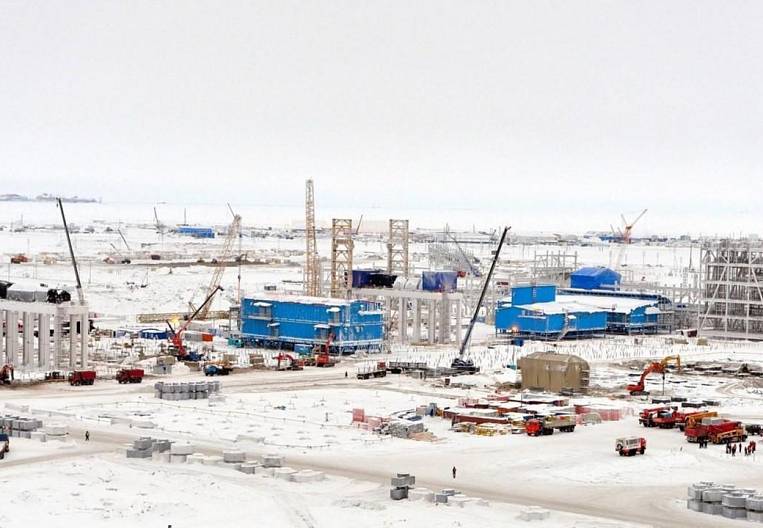 Photo: novatek.ru
WITH THE POLMILLIARD DISTANCE
On March 6, at the final annual meeting of the Ministry for the Development of the Russian Far East in Vladivostok, Deputy Chairman of the Board of PJSC NOVATEK Denis Khramov confirmed the preliminary assessment of the company's investments in the construction of a terminal for transshipment of liquefied natural gas (LNG) in Kamchatka: "from one to one and a half billion (dollars. - EastRussia) depending on from the selected location of the object ". "At the moment, pre-design work is underway, studying the most suitable locations for the complex. After that, the design will begin," said the top manager. The decision to create a legal entity NOVATEK Kamchatka has already been made, added Denis Khramov.

NOVATEK has announced plans to build an LNG terminal in Kamchatka since last year. The capacity of the facility should be 20 million tons at the first stage, the launch of the terminal should take place no earlier than 2022-2023. The company announced the completion of the preparation of pre-design documentation for the terminal on January 31: Deputy Chairman of the Board Mark Anthony Jetway estimated the cost of building the facility, if it is located in Mokhovaya Bay near Petropavlovsk-Kamchatsky, at about 60 billion rubles.

But the options for placement, as follows from the words of Denis Khramov, are still at least two, and the second is more expensive in half, $ 500 million.

In February, as previously reported in the press service of the Government of Kamchatka, the investor was offered an alternative site for the possible location of the terminal in Bečevinskaya Bay - it is more than 50 km in a straight line from Mokhovaya. In Bečevinke from 1960-ies there was a garrison village, the base of submariners and missiles, but in the middle of the 90 the garrison was disbanded, and the Ministry of Defense decommissioned the infrastructure from the balance. The communication with Petropavlovsk-Kamchatsky at a time when submarines were still in the bay was provided only by means of sea or air transport: there are no roads to Becevinka.

The difficulty of gaining access to the site in the Mokhovaya Bay is obvious, recognizes the interlocutor of EastRussia in the government of Kamchatka. In Avachinskaya Bay, in Vilyuchinsk (exactly opposite to Petropavlovsk-Kamchatsky - EastRussia), submarines are still based, during the ship calls, where the water area overlaps, and this event is absolutely impossible to predict. "As far as I know, the frequency of the planned call of vessels for the needs of NOVATEK's terminal is great, and when there are submarines, no one knows." At any moment they can give a go-ahead to everyone: do not move, and that the liner that the boat rises for two or three hours, says a senior Kamchatka official.

In his opinion, NOVATEK will arrange Bečevinskaya Bay. But this option is not very acceptable for the authorities of the region. Kamchatka energy needs LNG, which could give NOVATEK from the volumes supplied to the Asian markets. But if in the case of Mokhovoy "boiler room next to, literally a few meters of the pipe - and everything will be fine, then from Becevinka no one will pull a pipe into the city." "The budget of the subject will receive taxes, but we also need gas to reduce tariffs and develop industry," complains the representative of the Kamchatka government.


FOR KAMCHATKA OR FOR ASIA?
Kamchatka Governor Vladimir Ilyukhin does not deny that the region would like to receive additional volumes of gas from the NOVATEK project, and even calls the figure - about 1 million tons per year. According to him, the gas fields being developed are no longer giving the volumes of fuel that are required for the developing economy of the peninsula.

The fuel consumed by the power system of Kamchatka, as of January 1, 2017, consisted of 21% of natural gas and 25% of petroleum products (another 47% comes from renewable energy sources - geothermal and wind power plants). Gas is produced by Gazprom, supplying it via a gas pipeline from Sobolevo to the regional capital, and with the transfer of CHPP-1 and CHPP-2 to gas, Kamchatka began to save billions of rubles a year - all fuel oil is imported. But more gas is needed, the governor says. "There is a project for the construction of a cascade of Zhupanovskie HPPs, which could solve the problem, but this is a very expensive project. The central power center of Kamchatka will not be left without electricity," emphasizes Vladimir Ilyukhin. "The question is: what type of fuel. This winter we were forced to one of To convert the CHPP to fuel oil, which has been spent for so many years because there is not enough gas. "

NOVATEK is the largest independent oil and gas company in Russia. Last year the holding launched the first line of the LNG plant in Yamal (the company owns 50,1% of the project, 30% - from the Chinese partners). To date, it has already shipped 1 million tons of products, and after the introduction of the third stage, the annual capacity of the plant will reach 17,4 million tons. In 2023-2025, NOVATEK is also planning to launch the Arctic LNG-2 plant at 19,8 million tons. The total reserves of the company's fields will allow to produce up to 2035 million tons of LNG by 57. "A significant part of this production will go to the rapidly developing markets of the Asia-Pacific Region," Denis Khramov said.

It is noteworthy that so far NOVATEK has been trading with Asia. In 2017, according to preliminary data, the company produced 63,39 billion cubic meters of natural gas, sold 65 billion cubic meters. There are no data on the sale of liquefied hydrocarbons, but in 2016, NOVATEK sold 1,25 million tonnes of LNG. Of these, only 44% went to export, mainly to Poland (the "daughter" Novatek Polska sold 507 thousand tons, or 92% of total exports) and other European countries.

At the same time, the Chinese partners of the Yamal LNG project are already contracting fuel for years to come. The ATR market is growing rapidly and requires more gas. According to Denis Khramov, in 2017, ATP countries consumed 70% of global LNG consumption (amounting to 293 million tons), and to 2030 the volume of the Asian market will be 335 million tons per year. "The possibility of efficient uninterrupted supply of LNG to the premium Asian market is, of course, a key factor in the competitiveness of the largest liquefied natural gas producers," Denis Khramov said.


FIRST ECONOMY, BECAUSE BENEFITS
The terminal in Kamchatka should become a solution to NOVATEK's problems in delivering products to Asian markets. LNG will go along the Northern Sea Route on ice-class gas carriers (Yamal LNG will serve, for example, 15 Arc-7 class gas carriers), but their freight is not cheap. The Kamchatka terminal will make it possible to transship LNG to conventional gas carriers, reducing transportation costs by almost half. The advantages of the Northern Sea Route usually include a significant reduction in the time of transportation of products from Russia to Asia and back in comparison with the southern sea route. The construction of the terminal, Denis Khramov lists, will help not only reduce the cost of transporting Russian LNG to Asia, but also "reduce risks for Asian consumers", as well as create a trading platform for NOVATEK "with its own price indicator" for LNG.

What is more important for the project is a good site provided with infrastructure, or tax incentives that are promised to all investors in the Far East by the authorities - while the issue is open. Denis Khramov at the collegium of Minvostokrazvitiya admitted that the company "carefully study the accumulated successful experience of applying stimulating mechanisms of development institutions in the Far East." "Given the scale of the project, of course, the implementation of such mechanisms could significantly contribute to its implementation," he said.

Interlocutors of EastRussia in the ministry and the Far East Development Corporation, which is responsible for granting the status of a resident of the TOP or a free port, acknowledge that preliminary consultations with the investor on the possible receipt of preferences have already passed. "The project will definitely take place, this is just the case when the economy determines where the mega-project will appear, and not the instruction from above," the official of the Ministry of Regional Development said. But until the moment when it becomes clear on which site it will be able to start building NOVATEK, it is too early to talk about any decisions on investor preferences, he adds.

The press service of the "Development Corporation of the Kamchatka Territory" EastRussia reported that representatives of NOVATEK have not consulted with the regional government on the benefits, but the region has suitable conditions for investors. "On the peninsula there are about 70 measures of financial and non-financial business support, the decision of the federal government has formed such highly effective instruments for attracting investors as the territory of the outpacing socio-economic development of Kamchatka and the free port of Vladivostok.It can not be excluded that NOVATEK will be able to take advantage of a wide range of existing preferences, - the press-secretary of the corporation Vladimir Slabuka says.

In NOVATEK, EastRussia was told that it would not be possible to comment on the situation with the choice of a site for the LNG terminal in Kamchatka.
Tags: gas investments Power engineering LNG transport The Northern Sea Route building Novatek Kamchatka