"We set ambitious goals for the development of alternative energy"

The Sakhalin Region intends to convert residential buildings, enterprises and transport to gas. Also, the region faces the task of developing alternative energy and reducing carbon dioxide emissions into the atmosphere. According to these indicators, the region intends to become the first in Russia. Governor of the Sakhalin Region Valery Limarenko told EastRussia about these and other goals for the coming years. 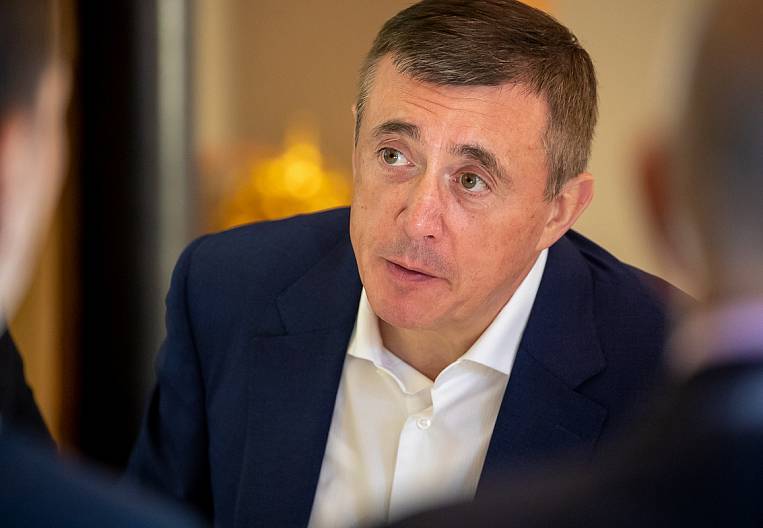 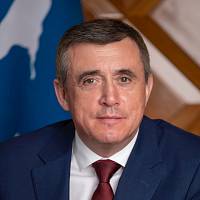 Governor of the Sakhalin Region

- At the recent conference "Oil and Gas of Sakhalin", the issue of transition to a "green" economy was discussed. How will Sakhalin change climate behavior and how will this affect life in the region?

- Next year, the Paris Climate Agreement comes into force in Russia. It aims to reduce carbon dioxide in the atmosphere. In this we want to become the first in Russia. A draft federal law is already being prepared, which will secure the status of a pilot region for Sakhalin.

We are setting ambitious goals for the development of alternative, including hydrogen energy. In this sense, our region has great potential, which creates the basis for the transition to clean energy in various sectors of the economy.

Projects to reduce the carbon footprint are already being implemented by large oil and gas companies working within the Sakhalin-1, 2, 3 projects. The challenge today is to create a unified system for controlling greenhouse gases for the entire island region.

The Sakhalin Climate Center is called upon to help this work. The agreement on its creation at the Far Eastern Energy Forum was signed by representatives of the Sakhalin State University and the Institute of Global Climate and Ecology named after Academician Israel.

- The issue of economic recovery by switching to gas was also discussed. How does the region intend to implement this? What role will the creation of an oil and gas industrial park play?

- In all industries where there is a significant fuel component, the use of gas gives a serious economic effect, so we set the task of gasifying the region, transferring generating capacities and transport to this type of fuel.

We are doing this work together with the Gazprom company. As part of the Sakhalin Oil and Gas Conference, we signed a joint five-year program. In total, it is planned to build about 1 km of gas pipelines, gasify over 200 thousand houses and 26 enterprises and boiler houses. For remote areas, autonomous gasification is provided through liquefied natural gas.

The construction of a small-scale LNG plant for Gazprom is also envisaged. This will be a unit with a capacity of up to 42 thousand tons per year. LNG consumption facilities will also be built on Sakhalin and the Kuril Islands. A memorandum on the construction of the plant was also signed at the conference.

Last week, we discussed with the head of Gazprom Alexey Miller the priority tasks for the implementation of the program for the development of gas supply and gasification of the region for the period 2021-2025. It is necessary to build more than one thousand km of gas pipelines, eight gas distribution stations, transfer to this fuel 157 boiler houses and 26 thousand households. The total investment in the gasification of the Sakhalin Region will exceed 33 billion rubles. At the same time, the company plans to build socially significant facilities in Yuzhno-Sakhalinsk. We will help her in this.

We are actively working to motivate motorists to switch from petrol to gas. The regional government has already fully compensated the costs of residents when switching cars to this type of fuel. About one thousand certificates were issued for these purposes. We continue to open gas stations. While there are not so many of them, we are at the beginning of the road. But we decide the issue. In the future, the network will cover all large settlements.

We also stimulate the creation of a new market for business, which is engaged in the transfer of vehicles to environmentally friendly fuels, the development of gas engine infrastructure. We need a network of gas filling stations, service stations that will convert to gas equipment. In places where there are a small number of consumers, it is necessary to ensure the work of mobile refuelers.

If we talk about the role of the oil and gas industrial park, then on its territory we are considering the possibility of locating service stations, as well as enterprises for servicing LNG equipment.

In general, the creation of an oil and gas industrial park is aimed at increasing the localization of services for oil and gas companies up to 25%. This will lead to a decrease in the industry's dependence on supplies of equipment and components from abroad, an increase in revenues to the regional budget, the emergence of new high-performance jobs for Sakhalin and Kuril residents.

We also plan to use gas to produce another environmentally friendly fuel - hydrogen. A separate industrial park will be created for these purposes, where hydrogen producers and service companies will be located.

- Sakhalin intends to develop ecological tourism; the region's projects are included in the national program. Why did you decide to pay attention to this area? What projects do you pay special attention to?

- The Sakhalin region has a huge number of unique natural places, and it is quite logical to use this potential for the development of tourism. At the same time, it is important to preserve ecological biodiversity. The implementation of ecological tourism projects will help resolve these issues.

Among the major projects is the development of the tourist and recreational cluster "Laguna Busse". This initiative was included in the TOP-10 of the All-Russian competition of the Agency for Strategic Initiatives, the results of which were summed up last week.

The project covers about ten places, such as Lake Busse, Capes Giant and Eustathia, Turquoise Lakes and other unique natural sites. They attract tourists even now. And thanks to the victory in the competition, we will be able to make visiting them more comfortable: to create visitor centers, glamping areas, hiking trails, gazebos and much more. It will also allow us to provide care for the territories.

If we talk about other tourism projects that we will pay attention to, these are the Onekotan Archipelago in the Northern Kuriles, Iturup Resort in the middle Kuriles, as well as the Southern Kuriles tourist and recreational cluster. We are preparing for the implementation of these projects, looking for investors.

- Sakhalin Oblast is four years ahead of schedule, the first in Russia, to complete a resettlement program from hazardous housing. How did you achieve this?

- There is a large volume of emergency housing in the Sakhalin region, people have been waiting for resettlement for years and decades, so I set the task to intensify this work. We increased the amount of funds for these purposes from the regional budget, and were able to involve the funds of the housing and communal services reform fund.

At the federal level, our work was appreciated, and now it is planned to allocate additional federal funds to the Sakhalin Region through the Housing and Utilities Fund for the resettlement of emergency housing, recognized as such after January 1, 2017, including for the Okha program.

- Will the lands transferred by the Ministry of Defense to the region be used in housing development?

- Oh sure. In Yuzhno-Sakhalinsk, the transferred land plot will be used for the construction of a new microdistrict "Garant". The total projected area of ​​housing will be 110 thousand square meters. meters. 3 people will be able to live there. It is also planned to build a general education school for 500 children and two kindergartens for 550 children.

I want to note that due to the lack of technical conditions for connecting to water supply networks, the issue of transferring additional adjacent land plots by the Russian Ministry of Defense in order to build a new water intake and to expand the boundaries of the microdistrict under construction is being considered.

The ministry also transferred a land plot with an area of ​​29,4 hectares for the construction of a new microdistrict "Severnaya Dolina", located in the planning area of ​​Novo-Aleksandrovsk in Yuzhno-Sakhalinsk (Severny Gorodok settlement). The complex includes the construction of a kindergarten for 400 children, a comprehensive school for 500 children and multi-storey buildings for 3 apartments.

A 14-hectare land plot on Ukrainskaya Street in Yuzhno-Sakhalinsk was transferred for housing construction. To date, changes are being made to the urban planning documentation for the provision of a land plot for construction.

- Last year you decided to introduce KPI in the region - an indicator of the efficiency of officials' work. Did you manage to implement the idea, and what benefits did it bring?

- Just last week we held a two-day KPI session, where members of the Sakhalin government reported for nine months of work. So, in health care they achieved a decrease in mortality from diseases of the circulatory system and neoplasms. The shortage of personnel was significantly reduced, 28 out of 36 island polyclinics received the title of accessible.

The challenge in education is to bring staff training closer to the needs of employers. Eleven advanced training programs have already been developed for leading Sakhalin coal and construction companies. As for the work of the Ministry of Construction, 11 families have improved their living conditions since the beginning of the year, which is almost 8,5 more than planned.

And such key performance indicators are defined for each ministry and department. All of them are designed to improve the quality of life in the island region. But the most important thing is the trust of residents, their assessment of the effectiveness of the work of the authorities. We regularly conduct social surveys, collect feedback through requests from residents in social networks. The Regional Management Center, which opened in the Sakhalin Region in September, is called upon to make this work even more effective.

- It is already known that the Far Eastern airline will be named Taiga. What role will Sakhalin and Aurora Airlines play in it?

- It is planned to unite all air carriers operating in the Far Eastern Federal District as part of a single Far Eastern airline. "Aurora" among them is one of the largest and most dynamically developing. And we believe that its role in the new association should be one of the leading.

- Continuing the topic of air travel. Subsidies for flights to the Far Eastern Federal District run out quickly, the Sakhalin authorities usually negotiate with carriers, they themselves allocate money for preferential flights. What is the situation with this now, is there a shortage of tickets and will you return to the practice of subsidizing from the regional budget?

- Subsidizing air travel outside the region is the responsibility of the state. At the same time, in order to increase the transport accessibility of the region, we participated in the program of co-financing transportation from Yuzhno-Sakhalinsk to Blagoveshchensk, Komsomolsk-on-Amur and Petropavlovsk-Kamchatsky, as well as from Khabarovsk to Okha and Nogliki.

Due to the coronavirus pandemic, some flights have been suspended. Now, with the support of the Sakhalin Region, subsidizing of air transportation of privileged categories of citizens on flights Moscow - Yuzhno-Sakhalinsk of Aeroflot is being carried out.