Time to go to space should not 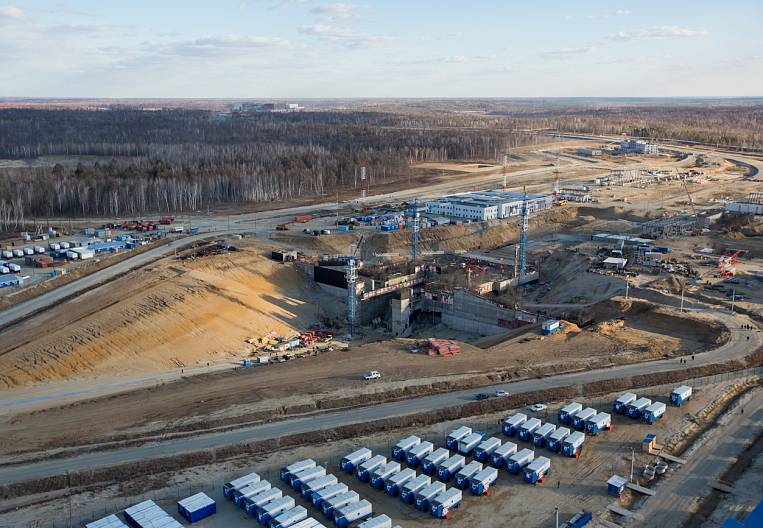 Less than one year is left until the announced completion date for the construction of the Vostochny cosmodrome. The EastRussia correspondent talked with Alexander Mordovets, deputy director of the Spetsstroy of Russia, and found out that it is not frosts that can prevent builders today, but the elementary absence of design documentation for a number of objects.

- Alexander Alexandrovich, serious frosts struck in the Far East. How will the weather affect the pace of construction of the cosmodrome facilities?

- Before the onset of cold weather, we almost completed the exterior work in order to work in the cold already in heat, to concentrate efforts on the finishing and installation of internal systems. Now we are completing the creation of thermal circuits at all 13 facilities that we have in our work. This will allow not to slow down the pace of construction and to comply with its schedules even in the conditions of the lowest temperatures.

- You said about the 13 objects of the cosmodrome. Are there objects already in the 100% readiness stage (or so)? Which of them are already installing equipment?

- In total, the space center is working on 15 complex objects. One of them - the road (first stage) - has already been put into operation. Another one - the storage complex of rocket fuel components - has still not received design estimates.

For the rest of the 13 complexes of objects, work is carried out at an accelerated pace. In September, Russian President Vladimir Putin visited the construction site, thanks to his attention, work on issuing project documentation accelerated. This significantly influenced the pace of construction.

The installation of equipment, which is carried out by TsENKI (Center for the operation of ground-based space infrastructure facilities), goes everywhere - on all technological units. For the integrated assembly of Spetsstroy Russia has prepared special platforms for TsENKI. We closely cooperate, we help each other, we allocate lifting equipment.

- When will the construction of the launch complex for the Soyuz-2 be completed?

- The construction of the launch complex has already been completed by more than 70%, concrete and reinforcement works are being completed on blocks A and B of the launch facility. We will complete construction of the launch complex for Soyuz-2 in July 2015, in accordance with the revised schedule. Moreover, according to the contract, these works were to be completed in December 2015 of the year. But taking into account the technological features of the preparation of the launch of the space rocket complex, we went to meet Roskosmos and postpone the completion date to July. If there are no changes in the design and estimate documentation, we will complete the work in time.

- And how is the work progressing on the second launch complex - under the “Angara”? Do you already have project documentation on hand?

"Until this happened." At us by and large there is no section from this documentation, there are no coordinates, there is no even a decision, when to begin the preparatory period. Although earlier agreements were reached to provide this information in October-November. There is an appropriate assignment to Roskosmos by Deputy Prime Minister Dmitry Rogozin.

- What is causing this delay?

- First, you need to make a final decision on the configuration of future launchers. The Military-Industrial Commission of the Russian Federation proposed to work out the issue of creating two launchers: for the heavy "Angara" and for the manned program. I think that at the next meeting of the commission this issue will be discussed, once again they will report to Dmitry Rogozin, and the final decision will be made. Then the main designers will work out the initial data, and the design will begin.

Therefore, if we plan in 2018 to complete the construction of the complex for the "Angara", then laying the approximate construction period of 40-45 months (considering that this is a more complex installation), these issues simply need to be addressed in the shortest possible time. Moreover, 40-45 months for the construction is only in the presence of a complete set of project documentation, worked on all 100%. And we would like to receive all the documentation in a timely manner so that there are no problems with pricing, recruitment, etc.

- However, at the construction of the spaceport "Vostochny" already today there are not enough builders, for example, installers. Where are you going to take them?

- Installation work is just coming to an end. Need for installers and concrete workers we do not. In the near future - in November-December - workers of such specialties will be released. Therefore, we raise the question of their regrouping: we need perspective construction projects in order to transfer the liberated personnel to them. Therefore, we need to accelerate the decision on the second launcher so that we have the opportunity to regroup as soon as possible. Especially it will be actual in 1-2 quarter 2015 year.

Of course, there were statements by Roscosmos about 13-15 thousands of workers, and even 20 thousands (about this Oleg Nikolayevich Ostapenko spoke in February of this year in a report to Dmitry Olegovich Rogozin). It is difficult for me to say on the basis of which calculations the position of Roscosmos was formed. After all, today, according to the project of the organization of construction, it is necessary to use 7570 builders. When we are given documentation on the whole complex of works, the construction organization project, which makes it possible to determine a clear need for the personnel involved, we will deploy 100 percent of the work on the storage complex for rocket fuel components, the solid waste processing complex, the airport, the entire residential campus, etc. - only then, perhaps, all 13 thousands of people and will be in demand. But perhaps the head of Roscosmos was referring to the total number of personnel, including professionals involved in the installation of equipment.

- How is it planned to increase the number of workers?

- In process of an exit of the design-budget documentation we will involve additional forces. Now it is too early to talk about 13 thousand, because not all facilities where these people are supposed to work, state contracts are concluded. In particular, now at the signing in Roskosmos there are four state contracts, for which, unfortunately, there is no design and estimate documentation.

- What exactly are these contracts?

- This is the industrial and operational base of the second stage, the communication and communication system, the metrological complex and the complex of operation of the fall areas.

- When are they planned to be concluded?

- This is a question for Roskosmos. In order for the objects to be delivered on time, these contracts must have been concluded long ago. Today, having no contracts, it is inadvisable to talk about attracting labor to these sites.

- How many builders are now employed in the construction of the cosmodrome?

As I said, we work according to the Construction Organization Project. And on this document today there is not enough order of 500-600 specialists. In general, these are scarce specialties - finishers. Why the scarce? Because the prices for finishing works approved Roscosmos, were much lower than the average cost of these works in the Amur region and the Khabarovsk Territory.

- Today, three enterprises are operating at the cosmodrome at Spetsstroy of Russia: Dalspetsstroy, the General Directorate for the construction of roads and airfields, and Spetsstroytechnology, as well as branches of these enterprises. Naturally, such a large-scale construction can not be conducted without the involvement of subcontractors performing special types of work. At present, about 30 of such organizations are involved in the spaceport facilities. We have relied on the strongest subcontractors: these are either strong local organizations, or those who have already shown themselves, for example, in the construction of Olympic facilities or other large construction sites.

- Yes, they will. We have no complaints about the organization and quality of work.

- How much is the backlog from the construction of the East?

- To speak today about the backlog is not very correct. To begin with, by the middle of 2013, the backlog was 18 months. At the same time, the project documentation at that time was developed only on 30-40 percent. In October, 2013 received a large amount of documentation at a time, and the schedule was adjusted. However, he did not take into account that changes will constantly be made to the documentation, and that it will not be 100% completed even by now - by November 2014. Obviously, this can not be reflected in the timing. Therefore, Spetsstroy Russia together with Roscosmos prepared an updated schedule. It takes into account the timing of installation work, the transfer of premises for the installation of process equipment, the transfer of objects for final finishing and their commissioning. This is quite a work schedule. According to him, the deadline for the first phase is July 2015.

- Are foreign technologies or equipment used in the construction of the Eastern one applied?

- According to the customer’s requirements, the installation of imported equipment was presumed. All the equipment that was supplied, we will install. Next, we propose to apply primarily domestic equipment. In this we are supported by Deputy Prime Minister Dmitry Rogozin. I am convinced that as a result it will make construction more economical and efficient.