09:30 Trutnev: a third of direct investments are realized in the Far East
Primorsky Krai 09:21 Connection to power grids in Primorye has acquired a social character
Amur Region 09:00 Amur level near Blagoveshchensk exceeded eight meters
Khabarovsk Krai 08:30 The third village was closed due to COVID-19 in the Khabarovsk Territory
Magadan region 08:20 Indigenous peoples of Kolyma will be reimbursed for the cost of quotas for salmon


Trans-Baikal Territory 08:00 Introduce lockdown due to coronavirus proposed in Transbaikalia
Trans-Baikal Territory 07:45 Smuggler with 12 gold bars was detained in Transbaikalia
Khabarovsk Krai 07:30 In the Khabarovsk Territory, vaccination is partially suspended
Irkutsk Region 06:30 Emergency mode due to fires introduced in the Angara region
The Republic of Sakha (Yakutia) 06:00 Yakutsk was not renamed into Tuymaad


05:30 Four regions of the Far Eastern Federal District are leading in vaccination against COVID-19
Trans-Baikal Territory 05:00 The ex-mayor of Chita was sentenced for bribes
Sakhalin Region 04:30 Additional 25 billion rubles can be directed to the development of the Kuriles
04:00 The first flights of the Far Eastern airline will start in July
03:30 The Russian government has allocated 46 billion rubles for new social benefits

SPV is pulled out of bureaucratic diapers

The regime of the free port of Vladivostok (SPV) last week turned exactly two years. That Free port grewEastRussia has already written: this, it would seem, is evidenced not only by the statements of officials responsible for the regime, but also by statistical data. At the press conference on the “birthday” of the SPV, however, they did not hide the fact that the regime also has problems. For example, residents still find it difficult to exercise the right to receive land for projects without tenders, which is granted to them by law, but is difficult to exercise due to bureaucracy, and it is too expensive to use the free customs zone regime. Some "goodies" for investors did not work at all, for example, an accelerated VAT refund. How they plan to fix it, EastRussia listened. 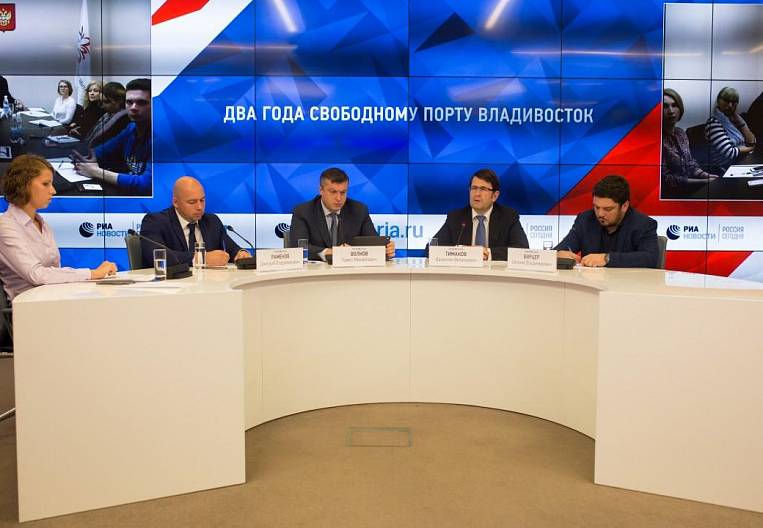 According to forecasts, which were announced at a press conference by First Deputy Director General of the Far East Development Corporation JSC Vladimir Pechurchik, by the end of the year the number of applications filed by potential residents of the free port of Vladivostok (SPV) will exceed 600 pieces. By mid-October, that is, for the two expired SPV preferential regimes, the 522 investor with a total investment of more than 421 billion rubles wished to become residents. The agreements were signed almost with 300 residents who are willing to invest more than 300 billion rubles and employ around 33 thousands of people in established enterprises. Most projects in the construction industry, manufacturing, logistics.

Among potential and existing residents there are foreign investors - in total, the CIDA received 27 applications for projects with foreign capital. The business is led from China with 12 applications, investors from Japan and the Republic of Korea are expected to be in second and third place. Their interests are concentrated in the construction of hotel and residential complexes, the agro-industrial sector, the creation of enterprises for the production of automobiles, sawn timber, and complexes for the shipment of coal.

“Now we can already observe the first success stories,” says Vladimir Pechurchik. - In total, over two years, FPV residents have implemented 25 investment projects. In fact, investments were made in the amount of 3,8 billion rubles, 524 jobs were created. By the end of the year, it is planned to launch another 20 new projects. Thus, following the results of the two-year existence of the regime, 45 enterprises will be commissioned. Completed projects include logistics complexes, manufacturing companies that produce new generation seagoing vessels, lighting equipment, fishing gear, construction mixes, two diamond industry enterprises, recreational companies and much more.

Both in the KRRD and in Minvostokrazvitiya are sure: such results indicate that the instruments for the development of the macroregion have been chosen correctly. There are no similar preferences in the territory anywhere else. For clarity, Pavel Volkov, Deputy Minister of RF for the Development of the Far East, suggests paying attention to the difference in payments of taxes and insurance fees:

- According to the World Bank methodology, the total tax burden on enterprises in Russia, including insurance contributions to the Pension Fund, Social Insurance Fund, medical fund, is 47%. In SPV, the same aggregate load is 10,7% for 10 years. In such conditions, it is profitable to invest, the risk associated with them is lower, the payback is faster.

The official emphasizes that work on improving the FPV regime is ongoing. “We have a number of tasks that we tackle in tactical and strategic terms. There is a discussion about the effectiveness of tax incentives and insurance payments. There is an important decision of the President, which will allow the application of reduced insurance premiums until 2025, despite the fact that earlier the benefits expired in 2019. We are constantly working on expanding the FPV - now the decision to extend its regime to the Soviet-Gavan region in the Khabarovsk Territory is in a high degree of readiness, we are also considering other municipalities, ”he says.

At the same time, the regime also has problem sides. Among the preferences of FPV are the provision of land plots without tenders, the ability to attract foreign labor without quotas, reduced time for scheduled and unscheduled inspections, the introduction of a free customs zone regime. For example, the rule on the simplified provision of land is in effect, but bureaucratic barriers were found in the legislation (EastRussia wrote about the problems of residents with land more than once, see, for example, the material "The Freeport has nowhere to turn around"). In the near future, the ministry will submit a bill to parliament, which should simplify the receipt of land by residents. In addition, one should expect a simplification of the arrangement of the customs control zone, which the resident must create if he uses the free customs zone (FCZ) regime. “According to the estimates of my business colleagues, setting up a very small customs control zone costs from 10 million rubles, which is quite significant. Sometimes it is easier to clear the goods according to general rules, ”said Pavel Volkov.

As practice has shown, some residents do just that, refusing altogether due to the complexity of implementation and high cost. As the commercial director of the UNION transport and logistics complex (LLC Avesta) Sergey Khodov said, their company is one of those who abandoned the STZ regime precisely because the 20 hectares of territory at the company's disposal was more difficult and more expensive to equip with a fence than to pay full fee for a gantry crane purchased overseas. Nevertheless, the management of the enterprise is waiting for the simplification of the regime in order to use it in the future.

“We use tax preferences, we were the first to receive such a preference as an additional land plot without a bidding procedure, together with the KRDV, having quickly and efficiently worked out the issue,” he said. In addition to simplifying the STZ regime, the company is counting on the promised introduction of an accelerated VAT refund, which is not yet in effect.
Tags: free port WSP Minskostokrazvitiya KRWA resident investments customs land