Spores around the keel 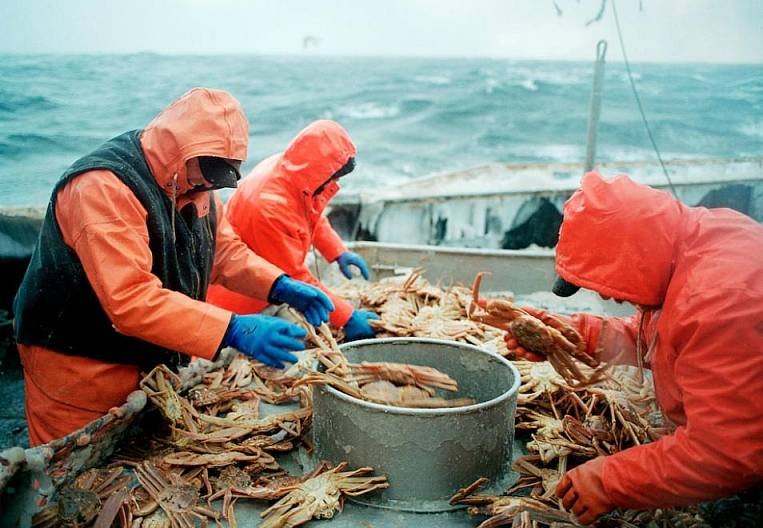 Photo by: ocean-media.su
The problems of the fishing industry have become one of the highlights of the December press conference of Vladimir Putin. Under the guise of a journalist (at least such is the official drama), the chairman of the board of directors of the Murmansk fish processing plant, Mikhail Zub, passed the event and criticized one of the most notorious innovations in the fishing industry - investment quotas, or, in the slang of fishermen, "keel quotas".

These quotas - as well as changes in the crab catch quota allocation system, which the president instructed his assistant Andrei Belousov to "consider", and then "report the opinion", cause mixed reactions among market participants. As of February, an emergency All-Russian congress of the fishermen's union is planned, which should form the opinion of the industry.

The traditional accusation against the fishermen by the authorities is non-transparency of the market. So, in May, 2016, Prime Minister Dmitry Medvedev said that “in the fishing industry of Russia, economic relations are not always transparent, in some cases they are purely criminal”. However, as early as December of 2016, Minister of Agriculture Alexander Tkachev stated: “The fish industry has become transparent, it is quite obvious, there are fewer corruption schemes. In recent years, the situation has become more correct to line up, and production, and investment. " The correspondence discussion between the minister and his immediate leader reflects the mood of the moment: in general, the authorities see that the fishing industry is much less criminal than in the 1990s, but more reforms are needed. Rosrybolovstvo promotes the third year and has already launched. The other, concerning the catch of the crab, as long as it exists in the form of a presidential instruction to “sort it out”.

However, as it turned out during the speech of Mikhail Zub at the press conference of the president, not everything is clear even with how many fish in the country are caught, processed and sold. According to Rosstat, a Russian eats a year 22 kg of fish; these data department receives, relying on the sale of products in retail chains. At the same time, according to Mikhail Zub, based on production and import data, this figure is only 10,5 kg. The head of the Information Agency for Fisheries, Alexander Saveliev, who calculated the consumption using a similar method, calls the figure 12 kg. Where does every second kilogram come from, no one can explain (Mikhail Zub says he specifically addressed this issue to Rosstat, but did not receive a clear answer).

Speaking on a straight line, Mikhail Zub drew the attention of the head of state to the fact that due to underdeveloped processing and preferential conditions for exporters, fish goes abroad. Rosrybolovstvo, in turn, is concerned about the high (up to 80%, according to the department) wear of the fleet. Back in 2015, Vladimir Putin ordered the development of a mechanism for investment quotas, and in December, the Russian Fishery Agency finally collected bids for those who would like to purchase such quotas. Among those who wish, there were 2017 companies, including 68 in the Far East.

The essence of the mechanism: Rosrybolovstvo removes 20% from the total allowable catch (ODU) for the most popular fish species and transfers it to companies that undertake to build new vessels at Russian shipyards and fish processing plants on the Russian coast. "In fact, this is such a major modernization program, which in five years will be fully completed," - said the head of Rosrybolovstva Ilya Shestakov.

However, judging by the number of applications for investment quotas (7 December their reception was completed), the participants of the program will be able to build 28 ships and 32 enterprises ashore. Considering that Russia's fishing fleet has about 2,5 thousand worn-out vessels, it's a drop in the bucket.

However, the modernization of the fishing fleet by the program "quotas under the keel" is not exhausted. A number of companies without any program prefer to build ships at foreign shipyards, where works, as the source of RBC + on the market, are conducted twice as fast and cost three times cheaper.

When submitting applications for participation in the Russian investment program, they still have to be approved by an interdepartmental commission, and the documents regulating its work contain contradictions that allow an official to interfere in the process. Experts say that if you want, you can easily cut down the construction of nine of the 11 processing companies in the Far East. "We are talking about such subtle things that even experts do not immediately understand what is wrong, but it is," said RBC + a market participant who asked to remain anonymous.

As Georgy Martynov, President of the Association of Primorye Fish Industry Enterprises, said at a recent meeting chaired by Deputy Prime Minister Yury Trutnev, "the criteria for the work of the commission are very subjective," this may lead to a restriction of investment, a reduction in the number of new fish-processing industries in the Far East, a reduction in future jobs and a reduction tax revenues, and will inevitably lead to litigation.

Trutnev drew attention to one of these subtleties: if the company that took the investment quota, failed to catch exactly as many fish as specified in the quota, it is fined. The Vice Prime Minister considered this an unjustified interference of officials in business. "Very in detail, our colleagues from Rosrybolovstvo prescribed the requirements for the catch within the limits of the investment quota, up to a kilogram. Rybakov, of course, was outraged. According to representatives of fisheries associations, when a fisherman, for example, was given a halibut quota of 6636 kg, and he caught 6635 kg, then a violation occurs, the penalty for which is 30 (!) Million rubles. We will also remove this, and there are several more normative proposals. We are improving the regulatory framework, I proceed from the fact that we must try to do it in the near future, "Trutnev reassured the fishermen.

CRAB FROM THE AUCTION

If in Murmansk, from where Mikhail Zub arrived, the bioresources are poor, then in the Russian Far East the situation is different - according to Rosrybolovstva, in the region is concentrated 30% of the stocks of the APR. But there is another problem: these bioresources, especially the crab, are so in demand on the world market that fishermen prefer to export them, and not sell them inside Russia.

The state sees that the crab miners receive super profits, and in the face of budgetary difficulties, they would like to pay these super profits in favor of the budget, explains the president of the All-Russian Association of Fishermen Alexander Fomin.

One of the possible solutions is to allocate quotas for catching a crab not according to the historical principle in force today (when quotas for those who successfully caught earlier: the company had such a share of TACs, this remains), but on an auction basis. In May of this year, quotas for catching a crab in some regions newly opened to fishing were distributed at the auction (where, precisely because of their novelty, the historical principle cannot be applied). 24 lot went for 23,1 billion rubles. at a starting price of 1,5 billion, President of the Far East Crab Catch Association, Alexander Duplyakov, believes that the winners have overpaid. Many people think that the crab is only a precedent, notes Alexander Savelyev; market players predictably gripped by concern: will the crab be transferred to the auction today, and tomorrow - all the fish? The head of the Ministry of Agriculture, Alexander Tkachev, even made a special statement on this issue, that “it is about preserving the historical principle for fishermen, the auction sale of quotas will affect only Kraboviki”. Representatives of the industry, however, spare no effort to dissuade the government from a possible expansion of auction practices. “The proposed scheme is a way of amputation of a part of enterprises that provide catch of a significant part of aquatic biological resources,” says German Zverev, president of the All-Russian Association of Fisheries Enterprises, Entrepreneurs and Exporters, who, after giving serious money for quotas, will remain without working capital. “It turns out that companies that have been building their business for 15 years, bought quotas, consolidated, formed crews, gained experience, will twist their arms,” adds Alexander Duplyakov.

Rosrybolovstvo fluctuates: the head of the department Ilya Shestakov called the introduction of auctions "one of the possible solutions", in which "there are clear cons, but also certain advantages." The question of historical quotas, indeed, is an ambiguous story. They dominated the 1990-e, but at the beginning of the 2000-ies it was decided to abandon the historical principle in favor of auctions. However, in 2007, Rosrybolovstvo managed to convince the president that it is necessary to return to the historical principle: it is because of the auctions that the fish is so expensive. In 2015, at the State Council devoted to the problems of the industry, the president recalled, without irony, that conflict. "I remember how they told me then that we need to switch to the historical way of issuing quotas, and how we all will rejoice after that, as everyone will be fine. Indeed, there are people who are very well. Now we need to distribute this "very well" to the entire population of the country, "the president said.

Certainly, the state will not leave crab miners alone, Alexander Fomin sums up: the owners of many companies have long moved to New Zealand, Australia and the USA, they are fine, and there is still no crab in Russian stores. There are no taxes on the super-profits received by Russian miners. But will the auctions help if they have not helped before? Perhaps the solution would be a certain rental principle of taking profits, the expert says, for example, on the basis of the cut-off price worked out in the oil industry. However, the development of such initiatives has not yet been reported.
Tags: Fishing quotas for keel shipbuilding investments crab quotas