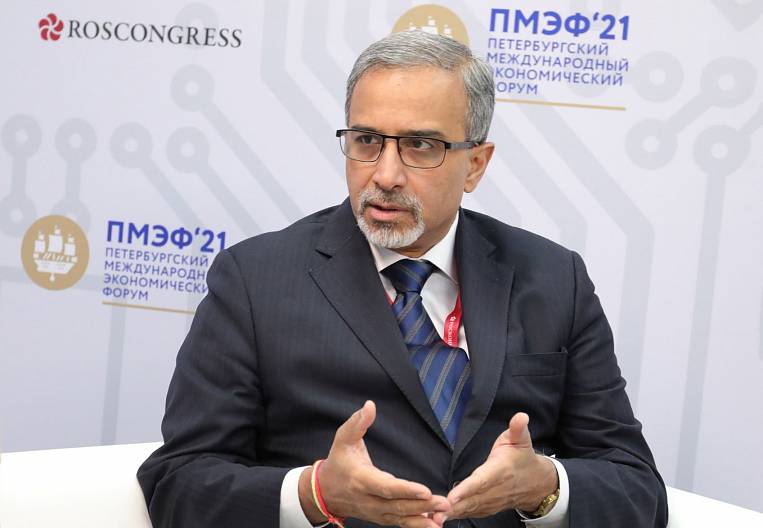 Photo: Embassy of India in Russia

- Mr. Ambassador, the most pressing problem facing all countries of the world is overcoming the consequences of the coronavirus pandemic. In this regard, Russian President Vladimir Putin said that "Moscow is ready to cooperate on vaccines against COVID-19, proposes not to politicize this process and agrees to work in this direction with the whole world." How do you assess the assistance to the Russian Federation in recent months - during the period of a significant surge in the incidence of COVID-19 in India?

- Thank you for this opportunity to speak with a representative of your wonderful agency. And I am very glad that, despite the COVID pandemic, we were able to come to St. Petersburg for one of the largest economic forums in Russia. The current situation in India is indeed quite difficult, but fortunately it is now improving. If three weeks ago every day we registered 400 thousand new cases, now this figure has dropped to 150 thousand. We are preparing additional measures to support our population. In this regard, we have received full support from the Russian Federation. Recently, the Prime Minister of India Narendra Modi and Russian President Vladimir Putin had a telephone conversation. The Russian Federation offered humanitarian assistance. More than 60 tons of humanitarian aid has already been delivered by 4 planes to India. And, of course, for this we express our gratitude and appreciation to the Government of Russia.

The second area of ​​interaction is the vaccine. Sputnik V has already been registered in India, and more than 3,5 million doses have already been delivered to India. In June, this figure will increase to 5 million, in July - to 10 million. Gradually, the number of doses will increase, and Sputnik V will become the main component of the vaccination process in India. It is expected that 60-70% of the world production of Sputnik V will take place in India. We are seeing active cooperation between Russian and Indian pharmaceutical companies during the COVID pandemic.

- If we talk not only about vaccines - what are the current figures for trade turnover and mutual investments between India and Russia? In 2018, the figure of $ 2025 billion was named as a strategic benchmark in bilateral trade by 30. Have plans changed, and what efforts, legislative measures and other steps will be required to reach this milestone? What is the dynamics of growth of Indian investments in Russia?

- India and Russia consider the expansion of trade and economic cooperation one of the priority areas. As benchmarks, the following indicators were announced: $ 30 billion in investments and $ 25 billion in trade. If we talk about investments, I think that the figure of $ 30 billion has already been reached. India's investment in Russia amounted to about $ 13 billion, and about $ 18 billion was invested by Russia in India. So, mutual investments are already at a good level.

Our trade turnover is not developing as actively as we would like it to be. In 2019, our turnover was about $ 11 billion. Unfortunately, trade has dropped to just over $ 9 billion due to the COVID pandemic, but we hope to see it rise again in 2021. We are taking a number of measures to increase the turnover indicators. We see the greatest growth potential in pharmaceuticals and high technology trade.

India plans to buy more oil from Russia. We also believe that the North-South corridor and the Chennai-Vladivostok corridor will give a new impetus to the development of trade. We expect trade between India and Russia to gradually improve. The economic impact of the COVID pandemic has slowed trade growth somewhat, but we hope that this trend will turn positive this year and next.

- At the EEF-2019, India, as stated by Indian Prime Minister Narendra Modi, decided to provide the Russian Federation with a credit line of $ 1 billion for the development of the regions of the Far East. It is clear that 2020 was not conducive to quick interaction, joint projects slowed down. And yet, are there any shifts in this area of ​​Russian-Indian cooperation?

- The development of the Russian Far East is a priority for the Russian Government, but it is also a priority for India, because we are interested in the development of interregional cooperation. In 2019, at the Eastern Economic Forum, Narendra Modi announced the Act East Policy, targeting the Russian Far East as well as the Arctic. He announced a $ 1 billion line of credit. The finance ministries of both countries are in contact with each other to work out details and agreements on this issue. Hopefully this will happen in the next couple of months. We would like Indian companies to come to the Russian Far East and invest in various sectors of the economy, including energy, ports, agriculture, forestry, hotels, tourism, ceramics, pharmaceuticals and, of course, the diamond industry.

Among the new areas we are focusing on renewable energy. A number of joint steps have been taken with the Sakhalin Oblast. We can also provide labor for Russian enterprises in the Russian Far East and in the Arctic. Indian companies are already participating in such large projects as Zvezda, as well as in the SIBUR gas project in the Amur Region. So there are already good examples of such cooperation, and we want to see more of them. We are also working on the creation of the Chennai-Vladivostok Eastern Sea Corridor. India, Russia and Japan have also launched a trilateral initiative to promote business in the Russian Far East. We hope that by the time India participates in the Eastern Economic Forum in September 2021, there will be more information on possible projects to develop our cooperation.

- In the Russian Far East, together with Indian investors, a number of large commercial projects have been launched and are being successfully implemented. In particular, several new enterprises were launched (including the KGK DV diamond cutting factory), Indian investors are participating in the work of the Free Port of Vladivostok. What objective difficulties does Indian business in Russia face and what assistance does it expect from the Russian side in the first place?

- Yes, there are already serious investments in the diamond sector in the Far East, especially in Vladivostok. This is a successful story. The logistics provided by the Russian side is improving day by day, and we welcome these changes. If some workers were granted long-term visas, this would facilitate this cooperation. Last year, during the pandemic, there was a decline in the diamond sector, but fortunately, thanks to the efforts of ALROSA, the diamond business has gained momentum again, which, in my opinion, is a very good sign. I would also like to recommend that Russian companies pay attention not only to cooperation with Indian partners, but also to the opportunity to invite highly qualified Indian specialists to Russia who represent a very competitive labor market and are able to work very hard and efficiently. We also consider the decision to create a large industrial park on the Russky Island important and hope for new opportunities for cooperation in this area as well.

- A key area in the development of cooperation between Russia and India is partnership in the agro-industrial sphere in order to solve food problems. This statement was made by your colleague, Nikolai Kudashev, the Russian ambassador to India at the beginning of this year. How does India view such initiatives?

- One of the most positive developments in recent years has been the transformation of Russia into an agricultural superpower. Russian agricultural exports are now very large - almost $ 30 billion annually, which means that Russian agriculture is developing at a very rapid pace. We see great potential in this area for cooperation with Indian agricultural producers, and we would highly recommend Indian enterprises to pay attention to the possibilities of cooperation with Russia in the agricultural sector, especially in the Primorsky and Khabarovsk Territories, in the Amur Region. At the forum, at a meeting attended by many governors of these regions, we made significant progress in this direction. Once the $ 1 billion line of credit is realized, there will be many opportunities. I agree with my colleague from Delhi, my good friend Ambassador Nikolai Kudashev, that the agricultural sector is an area in which cooperation between India and Russia can develop.

- Mr. Ambassador, how have your impressions of Russia changed during your work? I know that you are studying Russian - is it difficult?

- I really speak a little Russian. This is my third time in Russia. I was here for the first time when the Soviet Union still existed. Then I came between 2000-2003, during the first presidential term of Vladimir Putin. And now, 20 years later, I am here as an ambassador. I must say that Russia has changed incredibly, and there is definitely a new Russia, more prosperous, with greater economic opportunities, especially for young people. But there are certain traits of the Russian people that will never change. This is their friendship with India, and we very warmly reciprocate the love of Russians for good music, art and literature. Russia hosted the FIFA World Cup, showing the world that the country is capable of organizing very good sporting events. So I have a deep affection and respect for the country, as well as a deep affection for the Russian people. Their views on life are sometimes very unusual, and their philosophical basis for life is what unites the peoples of India and Russia.

- Mr. Ambassador, thanks for the interview!