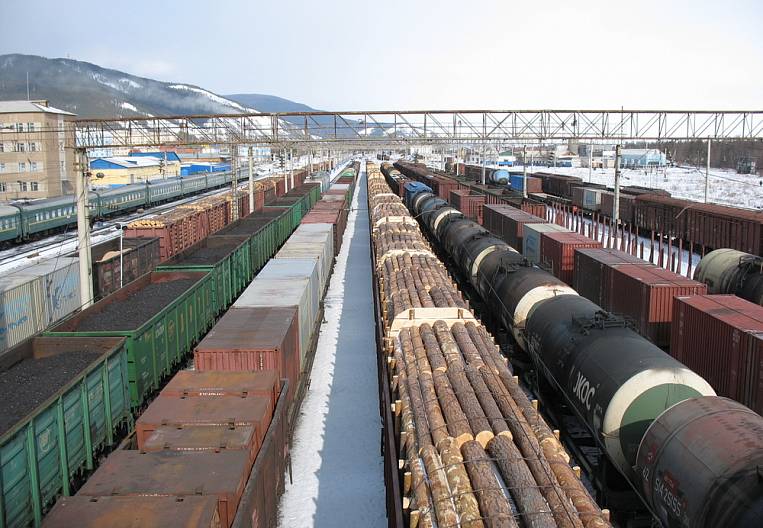 It was billions and it was at the BAM: from the moment when in August Vladimir Putin launched the reconstruction of the famous highway, in the taiga (in particular, the Amur river), noticeable even for the average inhabitant of the movement began.

From the station with the telling name Bamovskaya, in the Skovorodinsky region of the Amur region, along an inconspicuous track somewhere in the taiga, the journey takes about 1,5 hours. According to those who work there, this very place will soon expand the capacity of the most intense section of the so-called “small BAM-a” - a section of the great highway, where up to 20 different trains pass a day, including both passenger and freight trains.

"Now the road is still normal," explains the driver Kirill during the next "bumpiness" of the jeep along the winter road along the tracks. “But in spring and summer you can't get through here, especially on heavy equipment - it was driven here last winter”.

Having "poked around" enough, we arrive at "place X", where next to the main tracks rises a new dumping ground and the workers are laying a reinforced concrete sleeper - for six months the BAM-2 and all the necessary infrastructure for the railway are being completed here.

The complexity and uniqueness of these works is that they are carried out directly along the existing track of the small BAM, and it is categorically impossible to work if trains pass nearby for safety reasons. The rest of the time, specialists manually lay the canvas for a new siding with a length of 3 km. They have 25 sleepers on a flat 46-meter rail. On the curved one - 50. As the workers say, there is simply no point in bringing the track layer here because of such a small area: it is faster and more accurate to assemble it ourselves. In this way, a team of ten people manages to lay about 150 m of grating a day, on which the first trains will soon go.

“You have to swing a hammer on wooden sleepers - it's harder. And here everything is mechanized: we tighten the bolts with special screwdrivers, we do not twist anything by hand - we just put it in, ”explains the foreman Alexander Morozov.

For permafrost to appear in permafrost conditions, it was required to lay 170 thousand cubic meters in the basement. M of soil, the height of which in some areas reaches 5 m. But in some places the legacy left by the builders of 80-x comes to the workers' help: in some areas it is possible to use supports for bridges or zemolotno under the second path (of course, examination).

"Romance?! What kind of romance is there? - sleepers stacker Oleg Slavgorodsky is perplexed. - Work here, but not dream! But in general, it would be nice to pass here as a passenger - you sit like that, chatting with someone and so casually: "And these rails with sleepers, where we go, I put it myself" ... "

In addition to the busy train schedule, nature also leaves its mark on the construction site - builders will be able to crash into the existing track only with the onset of heat. While the permafrost is in the way.

“To start the movement here, we first need to align it: make a ballast prism in accordance with the project, raise the VSP (track superstructure - ed.) to the design mark and only then the trains will go here, - explains the chief engineer of the contractor Valery Zherebetsky. - And after the final laying of the rail and sleepers, the movement will be completely transferred to the new track. Later, the reconstruction of the old BAM, along which trains run today, will begin.

By the way, it has already been decided that all Bamov patrols from Tynda station to Bamovskaya station will bear the names of Soviet-era figures: writers, politicians, public figures. For example, the one we have chosen will be called "Mokhortov's patrol" in honor of Konstantin Mokhortov, who headed Glavbamstroy from 1974 to 1986. There will also be trips with a name much closer to nature: Hare, Mokhovoy and Glukhariny.

A few kilometers further, the preparation of the road is being completed - the track, of course, has been here before, but since the height of construction, no one has followed it at all. Upon completion of the work, together with BAM-2, the builders will also leave the roadside villages with an improved infrastructure.

“People will go, maybe thanks to whoever says it will be nice. This is one aspect, - Valery Zherebetsky smiles. - Another - there will be a legacy for the railway workers: there and then the fire departments, signalmen - on our way they will get to work in any way more convenient than on broken tracks.

It is these facts, local authorities say, that give people hope. In the Tyndinsky District alone, there are 15 Bam villages with a population of several hundred to several thousand people - all of them were initially tied to the railway. In addition, there are also economic aspects: people hope that the second stage of the BAM will help Amur residents to survive the crisis and provide new jobs.

“According to the law, only enterprises registered in our region can work there, which means there will be no reduction of jobs, they will, on the contrary, increase. Consequently, there will be wages and taxes, - Tamara Lysakova, head of the Tyndinsky district, says almost avidly. - In addition, another, moral component is also important: the people who built this road see that it lives and develops, that it is not a road to nowhere, as they wrote in the 1990s. Since freight traffic is increasing, it means that someone will also need to maintain this road. Let it not be a panacea, but it is still at least some kind of jobs. "

Only on the Tyndinsky section of the BAM they plan to increase the staff by about 800 people, who still need to be found somewhere (perhaps someone will be offered a move even from the Shimanovsky district, where the day before it became known about the liquidation of an entire carriage depot, as a result of which about 500 people lost work). In the meantime, the railway workers are working on the issue with specialized institutes for training young people, who will be recruited mainly from roadside villages. In total, by 2018, about 48 billion rubles will be allocated from the federal budget for the Tyndinsky section - the plans here are truly ambitious.

“Construction of 19 sidings, six second tracks, two double-track inserts, development of three stations: Yuktali, Tynda, Ulak. Further - the development of Tynda and turnover depots: Fevralsk and Berkakit. Well, and the social program for the construction of housing - do you understand what this means for those who since the 1980s have not seen anything but devastation? - explains the Deputy Chief Engineer of the Far Eastern Railway in the Tynda region Alexander Buger. - With the launch of new sections, the BAM's capacity to transport coal from the Elginsky and Neryungri deposits, ore from the Olekminsky mine will increase significantly. An exit to Sovgavan will also be added. "

In the meantime, all sidings operating in the Tyndinsky region operate on the principle of semi-automatic blocking - that is, until one train arrives at a neighboring siding or station, the next cannot go. With the introduction of new sites, the problem of waiting will be a thing of the past.

Changes are also coming in the BAM capital: within the framework of the federal project in Tynda, the locomotive depot will be expanded and improved, and a new microprocessor-based "slide" will be built - a special device for the economical sorting of trains. The bulk of the work is planned here for the next two years.

At the moment, about 2 thousand wagons a day pass through the main transport junction of the BAM, as well as its capital Tynda. Most of them carry coal, timber and various ores. According to railway workers, with the introduction of BAM-2 into operation, the capacity of this section will grow by 2-3 times.

Fly in the Ointment

However, it turned out that not everything is so rosy. In the process of preparing the material, Amur journalists began to receive calls from employees of one of the contractors - PJSC Bamstroymekhanizaciya. Wages are being delayed for people, which is why a number of works have been suspended in some areas. The EastRussia editors will try to figure out the situation in the near future.

The railway line from Bamovskaya station to the village of Tyndinsky was originally built in 1941, and in 1942, by decision of the USSR State Defense Committee, it was dismantled. Rails and sleepers were sent to the construction of a rockade railway near Stalingrad. New construction on the same section (the so-called modern “small BAM”) began on April 5, 1972, and in May 1975, the first train arrived on the new railway line to the Tyndinsky settlement.

8,3 hectares - such an area of ​​the clearing must be cut down to widen the land;

175 thousand cubic meters m - such a volume of soil will have to be poured into the base of the excavation;

7 - so many turnouts will be installed on the new junction.

38 - as many traffic lights will be installed;

48,6 km is the length of the cable to be laid at the station.