The opening ceremony of JCG Hokuto Medical Service in Vladivostok was held on 16 May, but patients began to receive patients here a little earlier. At the beginning of 2018, Russian doctors, including rehabilitologists, chiropractors and physician of LFK, underwent an internship at the 200 hospital hospital "Hokuto" in Japan, where for 20 years, an invaluable experience in restoring patients after orthopedic and neurological diseases was accumulated. 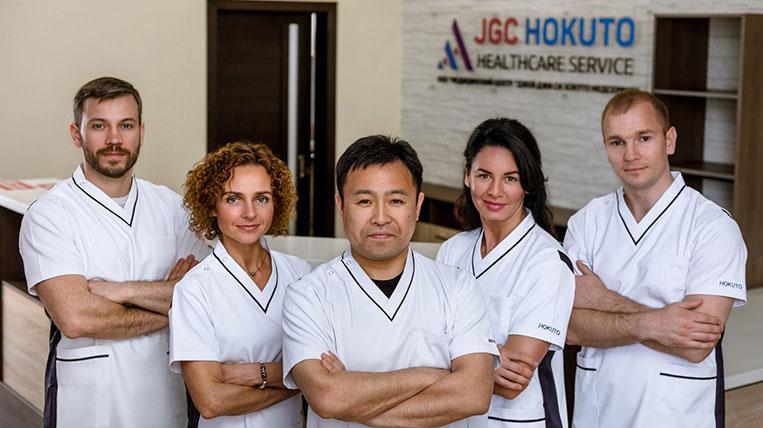 - We just opened, now in our state there are four rehabilitation specialists and three consulting doctors. But we will expand, because there are a lot of applications from Russian patients. Everyone wants to be helped by Japanese doctors. The Japanese have a delicate approach, they try to arrange patients for themselves. I constantly observe how patients come to us with harsh faces, but after talking with Japanese specialists they leave with a smile. In occasion of rehabilitation I will tell from a position of the doctor who has fulfilled in the Russian practical public health services 20 years. When an urgent operation is needed, people in our country find money, borrow, take loans, and rehabilitation, our main profile, is considered something of a secondary nature. And this is fundamentally wrong, - says the head physician, traumatologist-orthopedist of LLC "JCG Hokuto Medical Service" Sergei Kolchanov.

The project of the Japanese medical center was established by the shareholders of JGC Corporation and Hokuto Social Medical Corporation in July of the year 2017, and in September of last year at the site of the Eastern Economic Forum an investment activity agreement was signed between the KRFW and the Medical Center JCG Hokuto Medical Service. Investments amounted to 150 million rubles. The decision to implement the project was made against the backdrop of cooperation agreements between the countries that were reached by President Vladimir Putin and Prime Minister Shinzo Abe in May of 2016. The mission of the new center is to provide residents of Primorsky Krai and not only high-quality medical services in the organic synthesis of Japanese and Russian technologies.

- The Japanese tradition uses a complex of restorative medicine, which includes mainly manual therapy, manual work, an individual approach, and hardware medicine has an auxiliary function. Diseases are everywhere the same, but there is a difference in the characters of Japanese and Russian patients. Russian patients can initially show disbelief in the medical staff, many come with their own strategy, they believe in the Internet and their experience based on self-treatment. Such patients have to be persuaded and persuaded. In Japan, there are such people too, but there are a lot less of them, "said Oshima Masao, CEO of JCG Hokuto Medical Service.

- Japanese rehabilitation is based on special assessment systems, international scales of the patient's physical condition (for example, how fast he walks, what muscle tone is, how much he can stand on one leg, how fast to walk, and so on). All this is digitized, and an assessment is made. After a few days the evaluation is carried out again, the effect of rehabilitation is measured and the program is revised. For the patient, even minimal progress is an incentive for recovery. The rehabilitation school itself in Russia is strong, but there are not enough specialists. Often in one post-center, which is in Vladivostok, there is one rehabilitation physician and one physician at the 20 beds, - says Alexander Selivanov, coordinator of the international relations department of the hospital "Hokuto" (Japan). - And the intensity and timeliness are important in rehabilitation. After the same stroke, the therapeutic window is open for the first six months, then the effectiveness of treatment falls. It often happens that the patient returns home after the operation and does not lead an active life, lies and withers, is not properly restored after the operation. If the young people all heal quickly, the elderly person, breaking his leg, spends half a year in a cast, the muscles atrophy. He begins to walk less, rarely goes outside, begins to hurt more often - a vicious circle turns out.

According to experts, they try not only to treat, but also to inform the population. Doctors conduct lectures and master classes on health restoration. Over time, JCG Hokuto Medical Service plans to accept up to a hundred people a day - with Russian doctors and truly Japanese hospitality.

Published in the journal "Economics of the Far East"
You can subscribe to the magazine on the portal investvostok.ru
Tags: Free port JGC Hokuto Medical Service Japan investments Vladivostok