The residents of the villages and villages of the Amur Region have a new reason for joy: the feldsher-midwife stations, the construction of which began this year, are already being commissioned. So far, only two FAPs out of the planned 100 are 26% ready, but by the end of November, the contractors will commission four more, and 19 on New Year's Eve. EastRussia learned the details of how the regional authorities in less than a year solved the problem of affordable medical care in remote settlements of the Amur region. 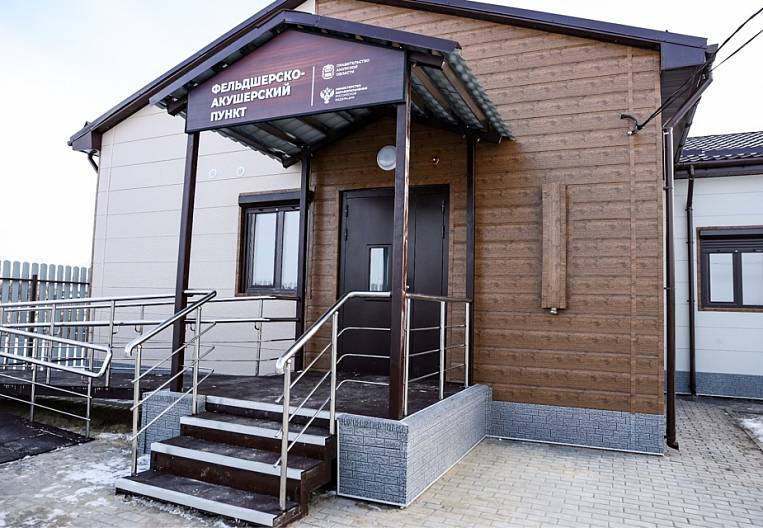 The plans of the government of the Amur Region to build 26 FAPs in 13 municipalities became publicly known in January 2020. The head of the Ministry of Health of the region announced that the department had selected a contractor and approved the terms of reference, planning and even a complete set of working areas for the construction of modular medical centers, which already provide living quarters for workers.

Priamurye then allocated almost 670 million rubles for the development of primary health care within the framework of the national project "Health", and more than half of this amount was sent just to resolve the issue with FAPs, whose state already left much to be desired. It is high time to eliminate the old buildings, replacing them with modern engineering solutions.

FROM WORDS TO DEEDS

In the villages of Ignatievo, Blagoveshchensky District and Koboldo, Selemdzhinsky District, in early July, the developer drilled wells for process water and hammered all the piles. And four months later, in mid-November, the Governor of the Amur Region, Vasily Orlov, pleased the citizens: these two FAPs are technically 100% ready. It remains to bring only equipment and furniture - everything necessary for the doctors' work has already been purchased.

“Before the onset of cold weather it was necessary to start all the work“ under the roof ”, then the teams returned and continued their work. Now the object is completely ready, inside the building there is a doctor's office, a treatment room, a sterilization room, a number of utility rooms and a bathroom equipped with everything necessary, including for people with limited mobility. Improvement has been carried out on the adjacent territory: ballot boxes, benches, outdoor lighting have been installed. The building also has fire and security alarms. Process water is supplied from a well, which is specially drilled on the territory of the FAP, clean drinking water is imported, the sewage system is brought into a septic tank, which will be pumped out as needed, "- this is how Andrey Permilovskiy, deputy director of VZMK-60 LLC, outlined the results of work in the village near the main airport area.

Modular FAPs are combined with apartments for doctors who will work there. The living quarters will become the property of the Ministry of Health, which will rent them out. Thus, doctors who will travel to villages and towns to treat local residents do not have to worry about a roof over their heads: this issue has already been resolved. By the way, the federal authorities did not finance this addition: injections for solving the housing problem for doctors came from the budget of the Amur Region. Housing will be official, it will be assigned to hospitals.

Residents of the village in the Selemdzhinsky district, in connection with the actual restructuring of the feldsher-obstetric center, are satisfied not only with the forthcoming availability of medicine, but also with the associated savings.

“Now you don't have to waste time on the road to Ekimchan for a doctor to help. Of course, if there are any serious problems, you will have to go to Fevralsk, or even to Blagoveshchensk, to the regional hospital. But now you definitely don't have to worry about first aid, about a visit to a therapist: everything is close to home, "Irina Markelova, a resident of Koboldo, shared with EastRussia.

To make the wait not so boring, the population was offered to watch the construction of FAPs online - cameras, from which the regional government conducted round-the-clock video broadcasting, were installed at 17 construction sites. You can see how the contractor works in real time even now: surveillance devices show a full view both day and night.

The contractor does not intend to slow down the pace of work. At the end of November, the developer is going to transfer four FAPs to the Amur Ministry of Health at once - in Chuevka, Novopetrovka, Voikovo and Bogorodsky, and the rest - by the end of December. The residents of Borisoglebka are eagerly awaiting their medical aid center: this facility should be commissioned in the coming weeks.

“Borisoglebka is a village remote from the regional center, and it is long and not always convenient for local residents to get to Yekaterinoslavka, to the regional hospital. Needless to say, situations where a doctor is needed immediately. Therefore, the village's own FAP is very important and necessary, ”explained the head of the Oktyabrsky district, Sergei Dementyev.

In the first half of the year, the regional authorities provided more than 50 million rubles for equipping FAPs with furniture, appliances and necessary tools. The money was used to purchase almost 1,5 thousand items of inventory - from couches to first aid kit.

While suppliers are transporting the material base to the Amur region in parts, the Ministry of Health these days is finishing staffing new facilities with personnel. The solution to the problem has reached the home stretch: at 23 points, the entire staff has already been recruited, in three only a few vacancies remained open - interviews are being conducted with applicants. The head of the regional Ministry of Health, Svetlana Leontyeva, is confident that these jobs will be closed in the near future.

In the meantime, the contractor, one by one, is improving and handing over the ordered feldsher-obstetric stations, the authorities of the Amur Region are accepting mobile diagnostic systems. This year the region has purchased 16 specially equipped outpatient clinics on wheels with the money of the national project "Healthcare", and five have already arrived in the region. They will go to Selemdzhinsky, Tyndinsky, Arkharinsky, Zeisky and Magdagachinsky districts. Universal cross-country vehicles based on "KamAZ" will take doctors and medical equipment to small settlements in order to treat residents of tiny villages and villages - where the construction of FAPs is impractical.