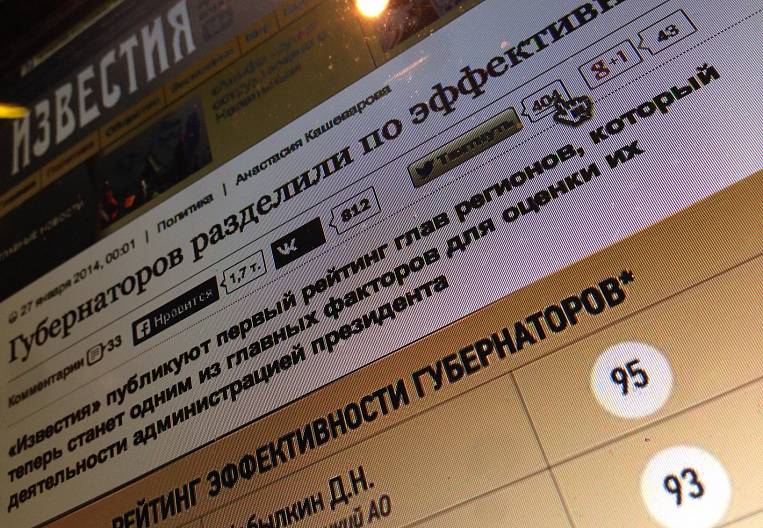 Yesterday Izvestia published the first  heads of regions, which, according to the publication, will now become one of the main factors for the assessment of their activities by the presidential administration. The rating was compiled by a group of experts led by the head of the Civil Society Development Fund Konstantin Kostin.

At first glance, the rating is very serious. The work of the governors was assessed based on the results of sociological research, based on the indicators of the economic situation of the subject, the assessment by the federal and regional media of the activities of the head of the region, the views of the expert community. Data on the ratio of money incomes and expenditures of the population were also taken into account. To work on the rating, the Public Opinion Foundation, the Federal State Statistics Service, and the National Monitoring Service were involved. The regions' heads were divided into four groups: "very high rating", "high rating", "average rating", "lower than average" rating.

The fact that the devil, as always, hid in details, almost immediately attracted the attention of readers of Izvestia, who left comments under the page. So, one of them notes: "Baked (Magadan) - on 9-10, and Kozhemyako (Amur) - on 24 ??? Magadanskaya Dies, there are no villages left on the road - all are abandoned, abandoned ... Kozhemyako "pulled" the area from a terrible flood and the people for it - a mountain! This is to the question of the objectivity of ratings. And the efficiency of the gubers. "

But the main sensation against this background is that the governor of the Sakhalin region, Alexander Khoroshavin, fell into the “risk group”, taking the 76 place and receiving the full 43 score from the possible 100. And as the authors of the rating would not vouch for the result, for residents of the region itself such a low characteristic of Alexander Khoroshavin became defiantly subjective. “We can support or not support Khoroshavin as governor. But the one who puts him in last place among all the leaders of the FEFD, and even more so with such a lag, signs in complete ignorance of what is happening in the Far East of the country, ”one of the users of the Yuzhno-Sakhalinsk city forum summarizes.

Users note that no social upheavals that would have distinguished Sakhalin from the general flow of events in the Far Eastern Federal District have occurred recently. On the contrary - the island is traditionally the supplier of good news - here and the opening of new enterprises, and the development of relations with foreign partners. Moreover, winter is the ski season, and for many Far East right now Sakhalin is acquiring its own special resort meaning.

Analyzing the result of Khoroshavin, competent experts interviewed by EastRussia, draw attention to some coincidences - after all, at the end of last year, a number of public “raids” were made on the governor of the Sakhalin region. For example, he was accused of crazy spending on his own image (680 million rubles). Although in reality it was a question of funds allocated to the regional press state support system (starting from the content of unprofitable district newspapers and ending with television), which is absolutely in every region and for which Sakhalin is not the leader among the regions of the Far East.

After provocative accusations, residents of the Sakhalin region rose to the protection of the governor. For example, the editor-in-chief of the Sakh.com news agency, Ksenia Semenova, said that "sensible people do not have questions about the use of budget funds by the head of the region": social facilities are being built in the region, including kindergartens, housing, transport issues are being resolved. She recalled that Sakhalin is an oil region, the region is a donor. According to her, the Sakhalin Oblast receives less and less money from the federal budget, since it can almost completely provide for itself.

“Perhaps, the fact that Sakhalin began to earn a lot of money did not make someone upstairs, so Khoroshavin was decided to change to a more comfortable person,” said Ksenia Semenova.
So, returning to the rating published by Izvestia, the experts' verdict is deeply ambiguous. Of course, the cumulative work of reputable political scientists deserves great respect, but the phrase that this rating “will become one of the main factors for the assessment of their activities by the presidential administration” is perceived skeptically. At least - on Sakhalin.
Tags: Sakhalin Alexander Khoroshavin ranking