Before 2020, design work can begin on the creation of a mainland-Sakhalin railroad crossing. The idea of ​​connecting the island to the mainland with a reliable transport connection was touched upon at a recent meeting of the Russian government, where the investment program of Russian Railways was considered. 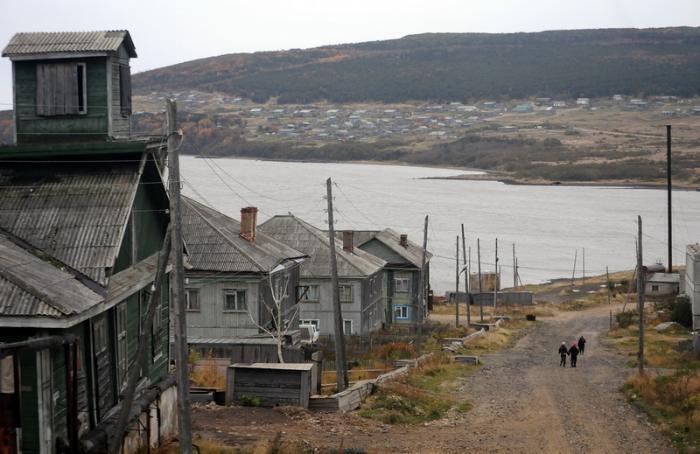 Photo by wikimapia.org
According to Prime Minister Dmitry Medvedev, for the next three years (from 2018 to 2020 year), the investment program of RZD will be more than 1,8 trillion rubles. According to him, these funds should be directed to the solution of the most important tasks that will allow to develop not only the state monopoly itself, but also the regions, as well as individual industries and enterprises.

"The most capital-intensive task is the construction of a new infrastructure. We will continue to modernize the Baikal-Amur and Trans-Siberian Railway, develop approaches to the ports of the Far East, the south, and the north-west of the country. A high degree of sophistication is the construction of the Northern latitudinal railway and the Moscow-Kazan high-speed highway (VSM). Additionally, the possibility of building a bridge to Sakhalin, approaches to it is estimated. These projects, of course, are huge, but they should ensure the accelerated development of entire regions, "said Dmitry Medvedev.

As the head of the Ministry of Transport Maxim Sokolov specified, about a third of investments (640 billion rubles) are planned to be spent on projects related to assignments of state significance. The volume of budget financing of RZhD in 2018 will amount to 63 billion rubles, the contribution to the authorized capital of 2018-2019 in the amount of 50 billion rubles will be separately provided. annually at the expense of the National Welfare Fund for the development of the Baikal-Amur Mainline and the Trans-Siberian Railway (the program for the modernization of the Eastern Range). "State support is provided for the implementation of projects that have a significant multiplier effect. We believe that this principle should be preserved with respect to some of the prospective projects. This includes, among other things, the second stage of the Eastern testing range, the Sakhalin bridge, the Moscow-Kazan bridge, "the Transport Minister said.

In turn, the head of Russian Railways Oleg Belozerov noted that next year the company plans to cut expenses by 80 billion rubles. and increase productivity by 5%. In general, the investment program up to 2025 year under such conditions will amount to 5,8 trillion rubles. "At the same time, we are ready to begin the implementation of the project on the transport transition to Sakhalin Island and start construction of the Moscow-Vladimir bridge," Oleg Belozerov said.

Recall that in order to connect Sakhalin with the mainland part of the country by rail, it is necessary to build a railway from Selikhin station (Khabarovsk Territory) to Nysh station (Sakhalin Region) together with a structure that will connect both banks of the Nevelskoy Strait. Most experts are inclined to the fact that it was a bridge, the length of which will be a little less than 6 km. The construction of the Selikhin-Nysh line with the length of 582 km, including the bridge crossing, will take 7,5 years.

Before 2014, the project was estimated at almost 400 billion rubles. At the current stage, Maxim Sokolov informed in September, the work could cost around 500 billion rubles. But this amount, the head of the Ministry of Transport, said, is not final, taking into account the ruble exchange rate that has decreased in recent years. Thus, it will be necessary to spend at least 50 billion rubles on the design and exploration work.

In addition, the Russian Railways will have to resolve the issue in the next two years to complete the reorganization of Sakhalin's railway infrastructure from a narrow gauge gauge of 1067 mm wide to the all-Russian 1520 mm, which should be found around 26 billion rubles. This project, which started in 2003, dragged on (of 805 km of the main line of the island highway is ready 625 km), while the locomotive fleet and other rolling stock has practically developed its resource. For example, in commuter traffic for more than 30 years diesel trains of the D-2 series produced at the Japanese factory of Fuji Heavy Industries are used. In 2018 year the term of their operation comes to an end.

"Once, as Minister of Railways, I made a decision on the need to reorganize the railway on Sakhalin on a wide track. There, for a long time already, Japanese technology was worn out, and we were still adjusting to it, "said Gennady Fadeev, the former Minister of Railways of the Russian Federation who arrived a month ago in Khabarovsk.

The construction of the mainland-Sakhalin rail link, he added, is necessary primarily for the local population: "A person should be able to freely travel to the central part of the country. He does not have to pay three times more for a ticket. " However, given the capital intensity of the project, an appropriate and economic benefit. According to Gennady Fadeyev, there is a great need in the country for deep-sea berths, which can be built on Sakhalin.

"For example, Kuzbass coal can cross the bridge by rail to Sakhalin. Already from the island, coal can be shipped to all directions, including the countries of the Asia-Pacific Region, "said Oleg Misevra, a member of the public council for the Minsk region.

Specialists of the Far Eastern Research Institute of the Marine Fleet (DNIIMF) should prepare a feasibility study for investments on the Sakhalin-mainland bridge in December 2017. In fact, we are talking about updating the draft terms of reference for the construction of the Selikhin-Nysh line, developed several years ago by a group of domestic transport institutes. According to the Governor of the Sakhalin Region, Oleg Kozhemyako, the demand for rail transport for passenger and freight traffic on Sakhalin will gradually increase. In particular, it is planned to make wider use of the possibilities of the railway for transporting coal. This will help reduce the load on motorways.
Tags: building Railways bridge Sakhalin infrastructure investments government Oleg Belozerov Dmitry Medvedev Oleg Kozhemyako