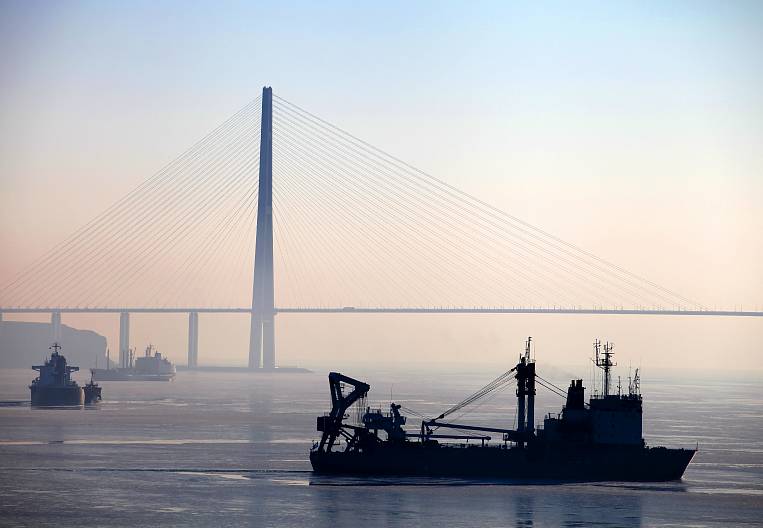 The lack of refrigeration capacity, ref. Sections and high railway tariffs during the peak season again led to a collapse at the main transport hub of Far Eastern fishermen.

"Traffic jams" in the Vladivostok port have become a new obstacle on the way of Far Eastern fish to the Russian market. In the context of the sanctions, regional fishery producers practically gave up export supplies, redirecting their products to Russian networks. True, when and at what price the Far Eastern fish will reach the counters in central Russia, one can only guess. The port of Vladivostok is again unable to cope with the peak load.

Dozens of transport vessels await their turn at the roadstead in the port of Primorye - the capacity for storing fish is sorely lacking, and for every day the vessels are idle, industrialists have to pay exorbitant prices. The excitement for refrigerators in the port has again led to an increase in storage prices. Capacity owners began to apply progressive rates. However, finding refrigerators is half the battle. Sending fish to central Russia has become extremely difficult this year. And it's not even about the increased tariffs for transportation from Russian Railways intermediaries in the high season. There are no free trains and refrigerated sections. Trains that leave the Far East for the Urals and Moscow, jammed with Far Eastern fish, go back every other time. They say that due to the sanctions, the volume of traffic in the opposite direction has sharply decreased.

“After the introduction of sanctions, we decided to redirect the main streams of our products to the domestic market,” says Kirill Volkov, executive director of the Ozernovsky RKZ-55 fish processing company, “Now all the refrigerators in Vladivostok are clogged, there is no place to unload. We managed to negotiate with our old partners and find a place to store. But since October 1, Dalcomholod introduces progressive storage fees for products. Depending on the term, the price will increase from 35 to 60 rubles per ton. Taking into account our volumes, the sums are rather big ”.

Like many suppliers, in "Ozernovsky RKZ-55" they are trying to decide how to export fish to central Russia. "The rolling stock is also a serious problem. So far we have been allocated 3 sections, and we need 15. In addition, the price during peak season has increased significantly. If in the pollock path, the delivery of one section costs an average of 1,3 million rubles, now it is 1,9 million, "Kirill Volkov said.

This problem is faced every year by all industrialists, who send fish to the domestic market. Only now the volume of deliveries has increased significantly, literally having concreted the funnel on the way of the Far Eastern fish. A number of Kamchatka companies hastily look for places in Primorye for the construction of their own refrigeration capacity. Those who supply fish to the Urals, are trying to take it out by road.

The problem of the delivery and storage of Far Eastern fish was one of the topics for discussion at the fishermen's congress in Vladivostok. The chairman of the Union of fishermen and entrepreneurs of Kamchatka, Sergei Timoshenko, believes that it is possible to resolve the situation only by increasing competition in the market both between ports and refrigerators, and between carrier companies. "Talks about high prices go on every year and are exacerbated during a mass run of salmon and their supply through the ports of Primorye. Moreover, rates are raised both for port workers and transport workers. On the one hand, there are really objective reasons for this. Economic. On the other hand, one must understand that all this is superimposed on the cost of the final product. And we, fishermen, do not get anything from this. And they accuse us of high cost! - said Sergei Tymoshenko in an interview with fishnews. "We either have to pay for a simple steamer, or for a refrigerator, or take it." And everywhere at higher rates. We, of course, are interested in the price not growing. After all, only at a competitive price our goods will be in demand. Only by ensuring real competition, we will be able to operate normally and efficiently in the market, without distortion. "

As the main alternative in the supply of Far Eastern fish, industrialists are increasingly beginning to consider the Northern Sea Route. A few years ago, Kamchatka already had experience of supplying local fish products to St. Petersburg along the Northern Sea Route. Three vessels delivered more than 20 thousand tons of salmon to the northern capital. However, the cost of icebreaking wiring then went through the roof. And although the price of imported fish was lower than in central Russia, suppliers worked on the verge of profitability. The Northern Sea Route was the fastest delivery method, but rather expensive due to Atomflot tariffs.

“Now Atomflot has switched to a different pricing system. It is more beneficial for the supply of fish. We inform the fish suppliers that the conditions have changed, which makes these deliveries more acceptable and more profitable, said the Deputy Head of the Federal Agency for Fishery, Vasily Sokolov, on the eve. - The Northern Sea Route is a very good tool to transport fish through it, especially during the salmon season, when the eastern coast of Kamchatka works. It remains to solve the issue of sales. " The Federal Agency for Fishery says that the amount of payment for icebreaking and ice pilotage of a ship on the Northern Sea Route is now determined by the actual volume of services actually rendered, taking into account the capacity of the vessel, its ice class, the distance to which the wiring is carried out, and the navigation period. They hope that the expansion of opportunities for the delivery of fish products directly from fishing areas to the European part of Russia through the ports of Murmansk and St. Petersburg will create competition to the railway route. However, those wishing to send fish from Kamchatka to the Northern Sea Route this year have not yet been found. Experts say that it will take a lot of time for companies to debug logistics.

"The problem with the storage of fish products in Primorye and high railway fares is not the first year, but now they have paid attention to it," says the chairman of the Kolkhoz fishing collective. Lenin Sergey Tarusov. One of the oldest and largest Kamchatka enterprises sells its products to intermediaries in Vladivostok, avoiding problems with delivery and storage. "We are not able to fish ourselves in the central part of the country. This requires considerable effort and effort. Therefore, we sell everything from the wheels in Vladivostok. Now the ship with 5 thousand tons of our belarubica approaches there, - says Sergey Tarusov. "But the Northern Sea Route is another matter." If the traffic along the Northern Sea Route is adjusted, then the cost of delivery will be low, and the terms - compressed. Of course, for normal operation in St. Petersburg you can and should build terminals and other infrastructure, develop sales markets. But this is a big city with good opportunities for development. In addition, a significant part of the products from there can be delivered by road. The Northern Sea Route would solve existing problems. "

However, not all fish producers share such a positive attitude. For example, the management of the Koryakmoreproduct company doubts that in the near future it will be possible to establish a normal process for the supply of fish along the Northern Sea Route. “The increase in deliveries along the northern sea route will create the same crater in Petersburg as it is now in Vladivostok. There are no free cooling capacities either, ”said company representative Vladimir Abakumov.

The problem of delivering Far Eastern fish to central Russia is now actively included federal officials. However, while the words are not going further, and all the proposed measures are a deep prospect. The port of Vladivostok has become another wall on the road to import substitution in Russia. For a long time, Far Eastern, including Kamchatka fish processing enterprises, lost to foreign companies in the competitive struggle on the Russian market. Norwegian salmon, although artificial, but the supplies are stable all year round and the lot size is adjustable. Sanctions gave way to the wild Far Eastern salmon. Our companies, already accustomed to supplying fish for export, drew attention to the Russian market. And although the customs and tax policy in the country so far stimulates only export supplies, high demand and the price of fish in the country, finally put everything in its place. It remains to solve the problem with the "traffic jams".

The Tax and Customs Code in Russia, despite the state task of import substitution, stimulates only the export of fish. When exporting to the industrialists compensate for VAT, although when delivering fish to the domestic market, VAT on them, on the contrary, is levied. At the same time, rates of fees for those who export and for those who supply fish to Russian entities are the same. In the context of Russia's accession to the WTO, the situation only worsened. Fulfilling its obligations, with 1 September, the Russian Federation once again lowered the export customs duties on frozen fish and crustaceans.