Roman Kopin: "Chukotka is another planet"

What opportunities was presented by the region at the WEF, learned EastRussia 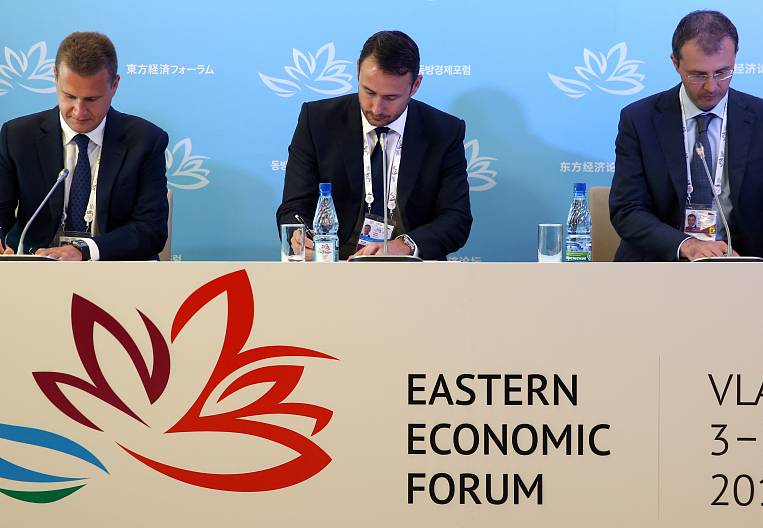 Governor of the Chukotka Autonomous Okrug Roman Kopin told about the pearl of the Beringovsky ASEZ, the energy bridge to the Kolyma and who is going to Chukotka to rest.

- Roman Valentinovich, please tell us what is the territory of advanced development "Beringovsky"?

- ASEZ "Beringovsky" is not similar to other areas of advanced development of the Far East. It occupies a large territory and includes a group of various deposits - gas, oil, precious metals, rare earth metals, but its main pearl is coal. Separately, these deposits are not so interesting, but, given their location in Chukotka, joining projects is rather complicated, expensive and, of course, complicates their implementation. But if you combine fields with infrastructure - an airport, a seaport, energy, roads, then together they begin to work as a large platform. This is our uniqueness, and this is the first ASEZ, the first experience in the Far East, which was formed around the mineral resource base.

- Do you already have investors?

- We developed the project jointly with the Ministry of the Russian Federation for the Development of the Far East, for now it has one anchor investor - the Australian company Tigers Realm Coal Limited, which is developing a coal deposit. Within the framework of the Eastern Economic Forum, we signed an agreement with the Far East Development Fund (FEDV) and Tigers Realm Coal Limited (TIG) on the joint development of the Beringovskoye coal basin development project. FRDV plans financial participation in the creation of infrastructure - the construction of the road.

- How will the resource potential of the project be revealed?

- Development of the deposit of the Amaam group of high-quality coking coals, located near the seaport, in  Has already begun. Modernization of the seaport will increase the transshipment of coal to  million tons per year. Thus, we will become the closest point to potential buyers - Japan, China, South Korea, and other countries of the Asia-Pacific region. This is more than two times closer than the traditional suppliers of the Asia-Pacific countries in Australia, and much closer than South America, which traditionally has a strong position in this market. We actually have a high quality oceanfront project close to potential customers.

- When can the TOP project be implemented?

- The project has already been launched, the infrastructure and the seaport are being developed, since this is the main goal. As part of the signed concession agreement with the FRDV for the road, the field will be connected with the port, which will ensure the export of products. We expect that the scheme will start working next year, and in two years we want to reach the figure of up to a million tons of coal exports.

The total investment of the first stage is about 13 billion rubles, five billion have already been attracted. This is mostly private money, we do not ask for federal money.

- When foreign investors get acquainted with the site in absentia, according to the documents, they are not deterred by the fact that Chukotka is a remote territory, very difficult to implement projects?

- It just doesn't scare them. Investors are undoubtedly worried about the general situation on the market, and as for the remoteness, they know for sure that Chukotka has a good position in subsoil use. We for the last years have radically changed the gold component of a subsoil user and we are one of the leaders in Russia in gold mining - we have experience working with different groups of companies - both Russian and Western. Kinross Gold, for example, has become one of the leading gold mining companies in the world thanks to the Chukchi project. We work with Polymetal, Millhouse Group and many others. These success stories shape the image of our region.

- How will the ASEZ affect the life of the population of Chukotka?

- We will create new high-paying jobs. At the first stage, there will be about 450 of them. The effect of the development of sites in the territory of advanced development will affect the public sector as well, since the salaries of public sector employees are tied to the average for the region. The project will need to be serviced, which means that small and medium-sized businesses will be involved in it. This will also stimulate economic activity within the region.

- At the Eastern Economic Forum, a cooperation agreement was signed between Chukotka, PJSC RAO Energy Systems of the East and LLC Regional Mining Company. Can we say that the creation of the Kolyma-Chukotka energy bridge has been launched?

- The construction of the Kolyma-Chukotka energy bridge is a very tasty project that has the potential to change the energy and industrial map of the entire north-east of the country. The project has already started. We received approval in principle from the Government of the Russian Federation and the Ministry of Energy. We started designing.

At the Eastern Economic Forum, we, PJSC RAO Energy Systems of the East and Regional Mining Company LLC signed a trilateral Cooperation Agreement, which will unite our efforts to implement investment projects to unite the energy system of the Chaun-Bilibino power center and the Magadan region (Kolyma - Chukotka ").

We will develop design and estimate documentation for the construction of a 110 kV high-voltage line "Bilibino-Kekura-Peschanka" and will allocate 150 million rubles for this work. 70 million rubles for the development of the project will be allocated by GDK Baimskaya. GDK Baimskaya will also develop design estimates for the construction of the 220 kV Peschanka-PP-Omsukchan line. RAO ES Vostoka will carry out design and survey work and develop design and estimate documentation for the power center in Bilibino.

Thus, the construction of overhead power lines "Bilibino - Kekura - Peschanka - Omsukchan" will fully provide the necessary energy for the mining activities of the Baimskaya enterprise and other investment projects in the region, provide electricity to the settlements of the Chaun-Bilibino hub, and create new workers in Chukotka. places. The task is not easy, it will require many efforts, including the withdrawal of outdated and construction of new generating capacities, replacement of the old grid infrastructure and the development of new lines to promising electricity consumers - to one of the world's largest porphyry copper deposits Baimskaya area and the Kekura gold deposit.

If we provide cheap, affordable energy to the region, then this, of course, will greatly change the socio-economic situation in Chukotka and the Far East.

- Implementation of large-scale projects in Chukotka will require the involvement of new specialists. Where to get shots?

- Chukotka is a small region, and there are not enough specialists: we are only for the last years have created more than 2,5 thousand jobs. Obviously, we will not physically find specialists for all vacancies in Chukotka, so we are attracting personnel both from within (companies employ local specialists) and from outside - mainly on a rotational basis.

- Have you thought about attracting people to permanent residence by providing them with a full social package?

- Chukotka is the wrong place for permanent residence. If you don’t mine gold or coal there, if you don’t have economic activity, then it’s difficult to live in Chukotka.

One of the advantages that we have for the formation of the TOP is the settlement of Beringovsky, which is the starting point where employees of the enterprise can be accommodated - about 30 kilometers from the field. Therefore, in order to transport and settle specialists to Chukotka, there must be economic justifications, and people must make their own decisions.

- Is Chukotka an attractive region in terms of tourism?

- Potentially attractive. Chukotka is definitely not a resort, it is a different planet. Therefore, they are coming to us. And this is not mass or cheap tourism. I believe that we will develop precisely extreme, educational, ecological tourism with ethnocultural elements. First of all - cruise programs, tourist routes for small groups within the region with a visit to Wrangel Island, Whale Alley, the Ergav folklore festival, the Arctic Olympic Games. Next year will be the 25th anniversary of the "Nadezhda" dog sled race, to which we will invite guests from different countries, first of all, of course, circumpolar ones - those who are close to it.
Tags: WEF Vladivostok Chukotka Roman Kopin TOP Beringovsky