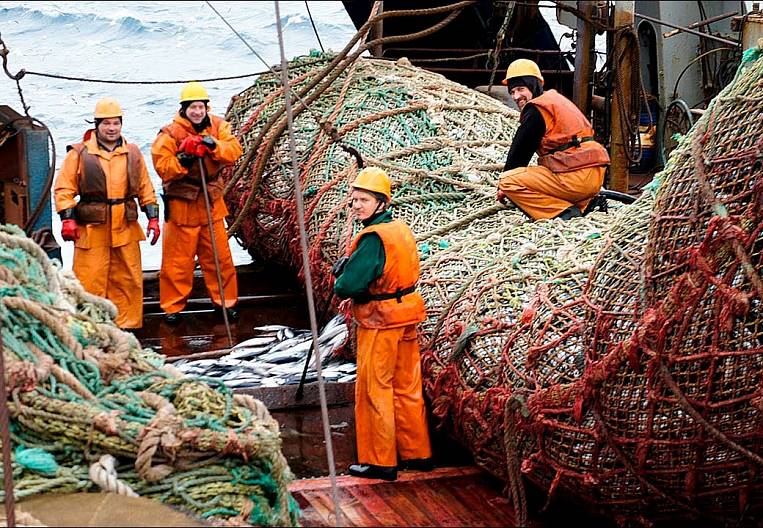 Pollock is waiting! Coronavirus closes Chinese corridor to Far Eastern Farmers Aquaculture numbers
All author's materials
"In the fish industry - emergencies", we wrote in September last year and explained why Russian fishermen would not start fishing from January.

She did not start. Not at all, true, but at many.

The cause of problems in fisheries was seen, of course, not only by us. However, more precisely of all, perhaps it was designated by the Chairman of the Accounts Chamber of the Russian Federation, Alexey Kudrin. Last year VARPE President German Zverev addressed him with a request to evaluate the effectiveness of state management in the fisheries sector and the financial and economic risks of legislative instability. The conclusion was devastating: "In the last three or four months, the actions of the government of the Russian Federation regarding the regulation of the fisheries complex have all the signs of" regulatory chaos. "

This, as they say, is a great story. Much more of those about whom we learn fragments. For example, the head of a peasant farm, Ruslan Khabibullin, who, due to the negligence of officials, lost his years of fishing for crayfish, roach and pikeperch in the Caspian Sea by 15.

Orders of the Federal Agency for Fishery on the distribution of quotas for users came out literally on the eve of the New Year, and the head of department Ilya Shestakov was forced to reassure the industry. “In fact, I don’t think that users will have serious problems,” he argued. - At us all territorial administrations are ready to issue permits. They had already received all the draft orders, schedules of duty were drawn up both on New Year's Eve and on New Year's holidays, so permits will be issued on weekends. ”

That is, with 1 January New Year, as prescribed by the regulations, it did not work out to issue permits for fishing, and some will not be able to get it at all.
The loudest and most scandalous story occurred with the Zarubinsk fleet base. The mining and processing enterprise in the Khasansky district of the Primorsky Territory was under the threat of stopping production activities due to the deprivation of quotas, which are historically assigned to the enterprise. Now 220 workers, as they say, are beating all the bells.

“Officially, a refusal to consider the application of the ZBF from the territorial administration of Rosrybolovstvo has not been received, but it is obvious that we will not be issued permits, since one of the officials of the Rosrybolovstvo“ threw out ”our company from the production order. The staff of the ZBF understands that it is possible that the settlement-forming enterprise is being deliberately destroyed or that a raider seizure has begun, ”says the appeal of the labor collective to the Governor of Primorye Oleg Kozhemyako. The fishermen ask the head of the region to initiate an investigation into the situation.

The Zarubinsk base of the fleet has all the contracts concluded with the Fishery in the 2018 year for a period of 15 years, nobody terminated them, and they are valid.

Rosrybolovstvo hints at the presence of foreigners among the owners, but, first, why it was not revealed during the whole of last year, when all enterprises of the FSB, FTS, FAS and Rosrybolovstvo branches checked for compliance with Russian legislation. Why is it allegedly found out on the night before the New Year?

And, secondly, why it was not revealed by the same FSB, FTS, FAS, Rosrybolovstvo and, moreover, the FCS, MIA, SVR, FMS and Rosfinmonitoring, who They are constantly working to identify transactions, including legal documents, which allow the management of domestic fishing companies and the establishment of control over them by foreign citizens and foreign legal entities, including citizens who have dual citizenship in.

In short, the dark history, as a result of which the entire able-bodied population of the seaside village lost their jobs.

However, the situation is so serious that it attracted the attention of many well-known economists and representatives of both houses of the Russian parliament. In particular, State Duma Deputy Sergei Shargunov is confident that ill-considered actions of the regulator in the industry can lead to a social explosion in the northern and far-eastern regions of the country.

“Regulatory chaos” is aggravated by the intention of the Federal Antimonopoly Service and the Federal Agency for Fisheries to change the allocation of quotas for catching aquatic biological resources. Back in August, the industry was excited by the information that the quotas of not only crabs, but also pollock, herring, cod and shrimp could go to auctions. This is an auction sale 20% of the total allowable catch of these species of aquatic bioresources. Add to this the intention of Rosrybolovstvo to make changes to the mechanism of investment quotas, and the picture of chaos will unfold in full.

“This is really insane,” commented Doctor of Economic Sciences Mikhail Delyagin. - And from a legal point of view, and from a purely commercial. Fishermen only in Sberbank took loans for a billion dollars, and when they are now taken away from a significant part of the quotas - at least half - what, in fact, what will they return? ”.

So the questions formulated by us in September last year continue to be relevant.

Who will be responsible for the millions of losses, for the shortfall in tax revenues, for unpaid wages? Who will answer?
Tags: quotas Rosrybolovstvo Kozhemyako