At the V Eastern Oil and Gas Forum, which took place on July 7-8 in Vladivostok (FEFU, Russky Island), the tone was set by companies affiliated with Gazprom, the correspondent reports. EastRussia. Starting from the plenary session "Points of growth and development of the oil and gas industry in Eastern Siberia and the Far East" and ending with the final discussion "Transportation, logistics and infrastructure", they talked mainly about gas, in its various forms - as a rule, liquefied natural gas (LNG). 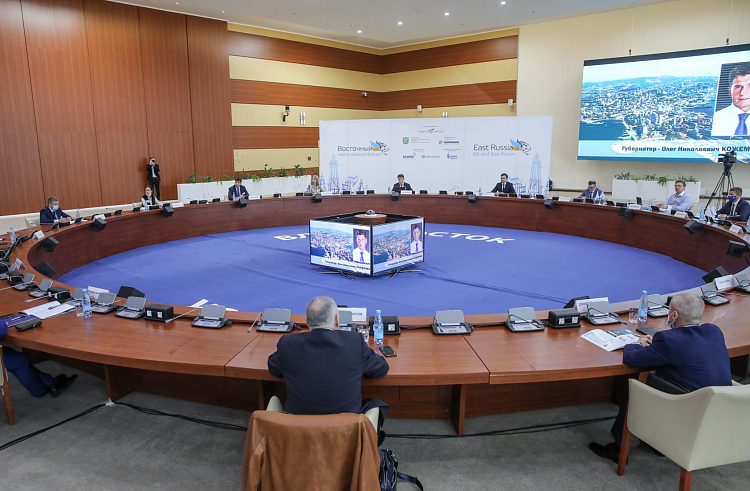 Opening the event, the Governor of Primorye Oleg Kozhemyako - the most representative official of those present at the forum - immediately indicated: the reality is that “without Primorye, the development of the oil and gas industry (of the country - Ed.) Is impossible”. In addition to export flows to the APR, which, one way or another, are closed to the ports and the territory of the Primorsky Territory, the region is building its own production facilities for processing raw materials into high added value products (Eastern Petrochemical Company (VNHK), Nakhodka Mineral Fertilizers Plant and a number of smaller). Modernization of heat supply enterprises, gasification of industry and residential complexes will also follow; by 2030, natural gas consumption should grow from the current 1,3 to 13 billion cubic meters per year.

Other regions of the Far Eastern Federal District, however, also have ambitious plans for gasification, which on average in the Far East is only 18% compared to 71% in Russia. In the Amur Region, gasification of the population will proceed in parallel with the construction of a gas processing plant (AGPP), old and new Sakhalin projects are actively developing, Kamchatka, Yakutia, and the Magadan Region are "catching up". 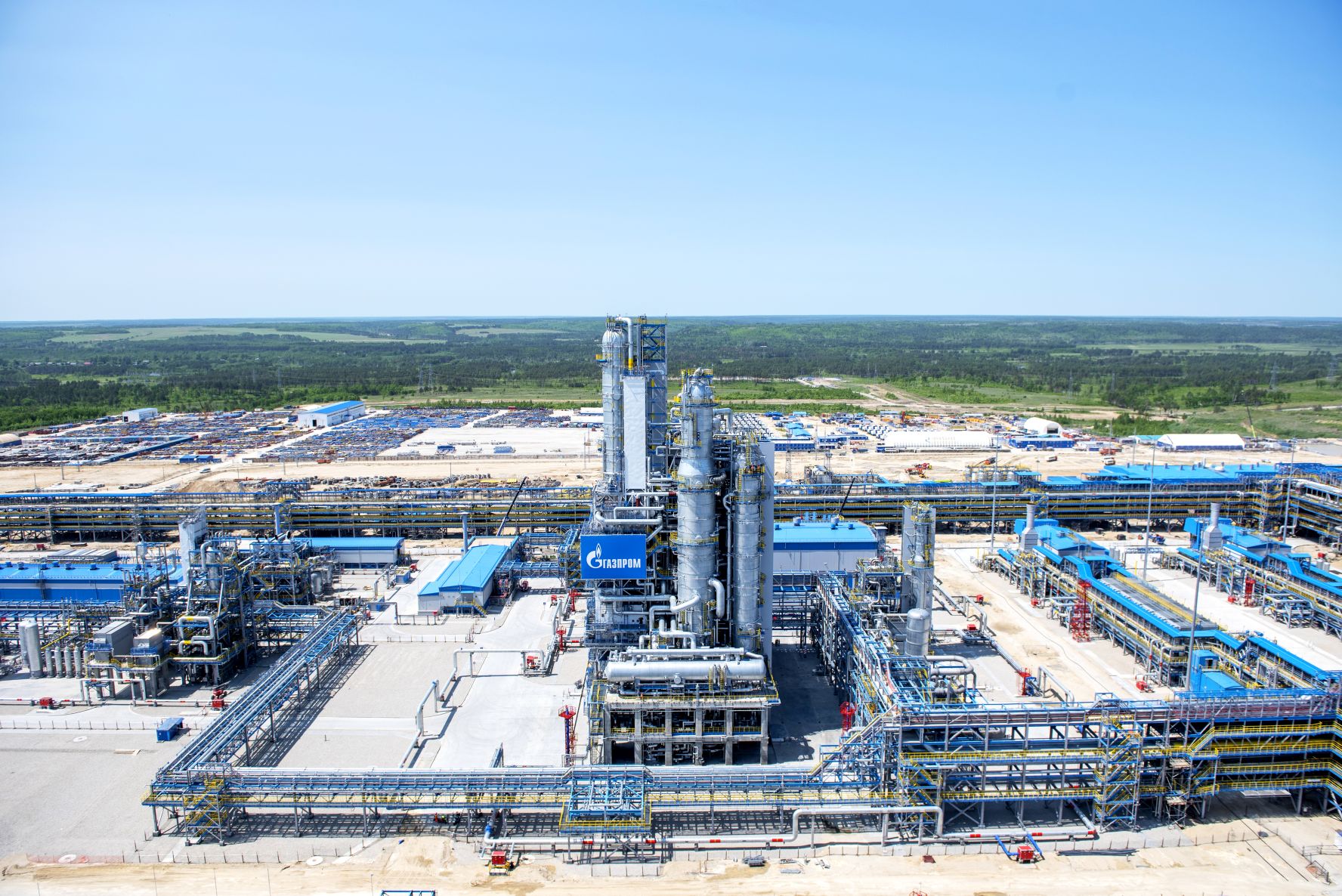 In remote areas, they rely on LNG. This is the most economical source of energy available, for example, for areas where gold mining is taking place.

Alexander Klimentyev, Advisor to the Permanent Mission of the Republic of Sakha (Yakutia) under the President of the Russian Federation, spoke about the general prospects for LNG in the Far East. Basically, they are implemented through low-tonnage facilities - today in the Far Eastern Federal District there are three of them, two are under construction, as many as 22 announced. There are plans to build two medium-tonnage facilities (Vladivostok LNG, LLC LNG). There is only one operating large-scale enterprise - Sakhalin-2, Far Eastern LNG (Exxon Neftegas Ltd) is under construction, Yakutsk LNG (Globaltek LLC), Anabarneftegaz, expansion of Sakhalin-2 TZ, expansion of Far Eastern LNG are announced for the future. As Alexander Klimentyev noted, liquefied gas can be used for autonomous gasification in Yakutia and Sakhalin; as a gas engine fuel on mining dump trucks of PJSC PJSC ALROSA, on the Svobodny-Vladivostok transport corridor; for bunkering tankers on Sakhalin, river transport on the Lena, Amur and Baikal, at the transshipment terminal in Kamchatka; for export to Mongolia, China, APR countries; by rail in Yakutia and public transport in Sakhalin.

FEFU scientists made their own rationalization proposals. The scientific director of the Polytechnic Institute of the university, Alexander Bekker, spoke about new approaches to protecting the structures of oil and gas platforms from the abrasive effects of ice. Director of the Research Institute of Ecotoxicology of the Ural State Forestry University, Mikhail Vinokurov, shared with the forum participants the environmental justification for the operation and construction of the oil and gas complex in the context of tightening environmental requirements and changes in legislation for oil and gas facilities in the Far Eastern Federal District.

Doctor of Economics Andrei Konoplyanik, together with the General Director of the Bedford Group, Vladimir Voroshilov, propose to gasify the remaining "uncovered 17% of Russian households", which is about 20 million consumers, through the transition to autonomous power supply, small-scale production of liquefied natural gas, which would be sent to the customer for airships. Sounds like fantasy, meanwhile, in fact, in Russia there are Atlant airships that are capable of delivering cargo, regardless of the weather, permafrost and off-road conditions - at a distance of up to 1000 km.

Director of Dalgazresurs Oleg Baranov spoke about plans to develop a natural gas field and build a small LNG plant - 6 tons per hour. Gas will be supplied to the regions of the Far East, possibly to China. Along the way, the manager is going to gasify the Verkhnebureinsky District of the Khabarovsk Territory. From the central village - Chegdomyn, to other settlements - from 10 to 320 km, and only 23,5 thousand people live in the region. Nevertheless, taking into account the fact that gas distribution in settlements is carried out at the state expense, the project is worthwhile. The volume of capital investments of the first stage is 2,79 billion rubles. As the enterprises of the Khabarovsk Territory are ready to use LNG, the supply of NGV fuel will be carried out within the framework of the state program “Stimulation of the use of NGV fuel and the development of gas filling infrastructure in the constituent entities of the Russian Federation for 2015-2023”.

During the discussion, the following problem was discussed: in the village, power supply is carried out by means of a diesel power plant. While there is access to gas, the utility provider refuses to switch to a new type of fuel that is clearly more cost-effective. “LNG, unlike diesel fuel, is not carried in buckets,” colleagues shared their philosophical conclusion.

However, not only LNG is going to be exported, but also other products of natural gas processing, for example, liquid helium. General Director of Gazprom Helium Service, Lyubov Brish, spoke about the unique production that was launched in the Khabarovsk Territory and is now expanding to the territory of the Nadezhdinskaya ASEZ in Primorye. With the launch of the AGPZ, there will be so much helium that Russia will come out on top in its export in the world. The gas processing plant will produce 42 billion cubic meters of LNG per year, respectively, 60 million tons of helium. By the way, Gazprom Helium Service is the only enterprise in Russia that fully fills its fleet of 180 KAMAZ trucks with its own gas engine fuel. 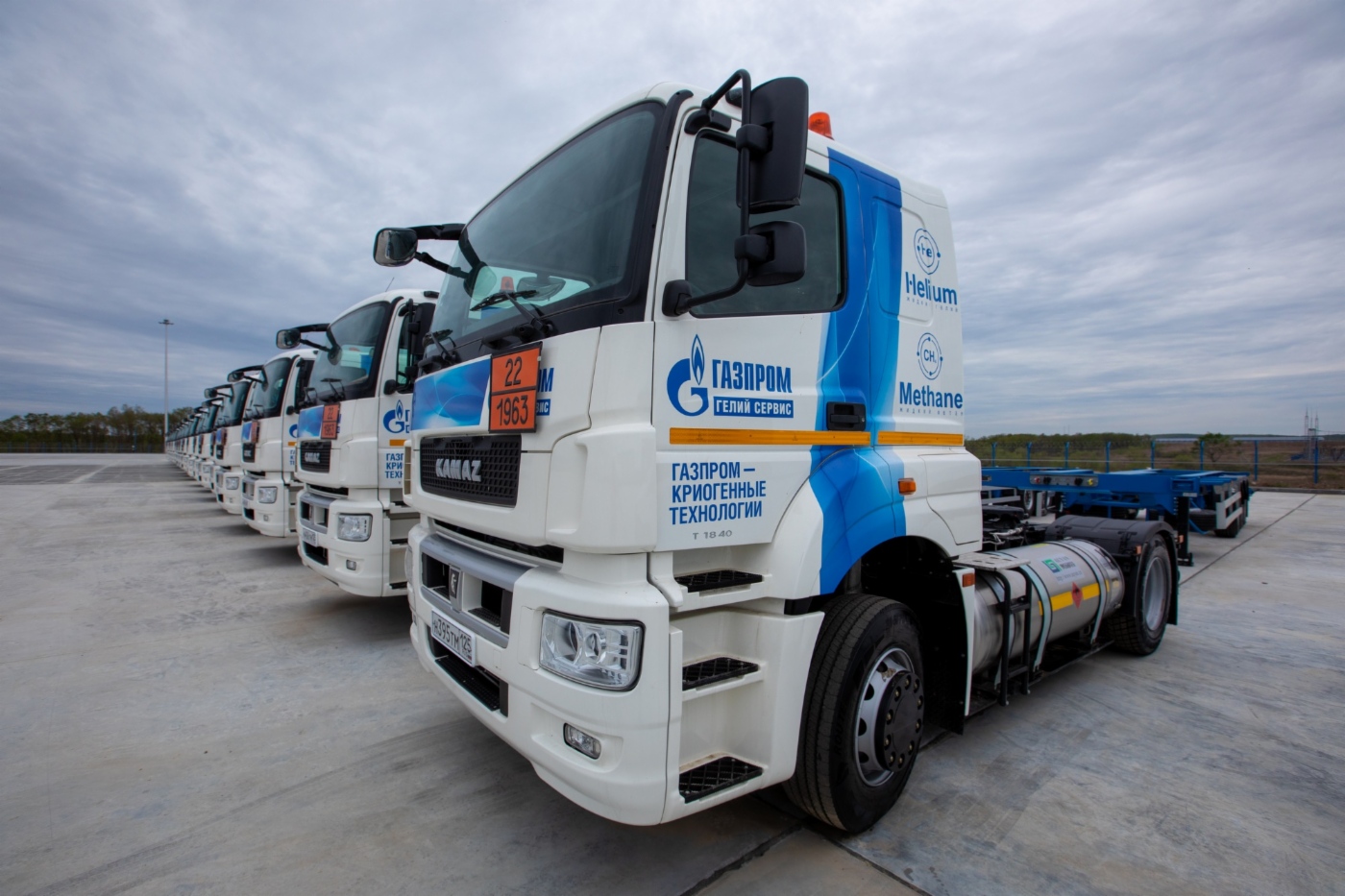 Vyacheslav Cheboksarov, Director of the Siberian Branch of Gazprom Gazomotornoye Toplivo, spoke about Gazprom's leading positions in the NGV market. Today 355 out of 546 NGV infrastructure facilities in Russia are owned by Gazprom. In 2021, the holding will open another 50 CNG filling stations. 9 AGMKS will appear in the Far East, including 3 - in Vladivostok, one each - in Artem and Ussuriisk.

Roman Gorbunov, Deputy General Director of DTSSS JSC, spoke about the development of the largest shipyard Zvezda, which is part of the holding. The enterprise is being built by a consortium of Rosneft, Rosneftegaz and Gazprombank. In 2024, the second stage of the shipyard will be built, instead of the current 4, 7 thousand people will work there.

“The structure is unique from a technical point of view, an open slipway, the most powerful crane equipment in Russia (the Goliath crane with a lifting capacity of 1200 tons), a system for launching vessels,” said Roman Gorbunov. "Now the production is working, from metal cutting to the delivery of the ship." 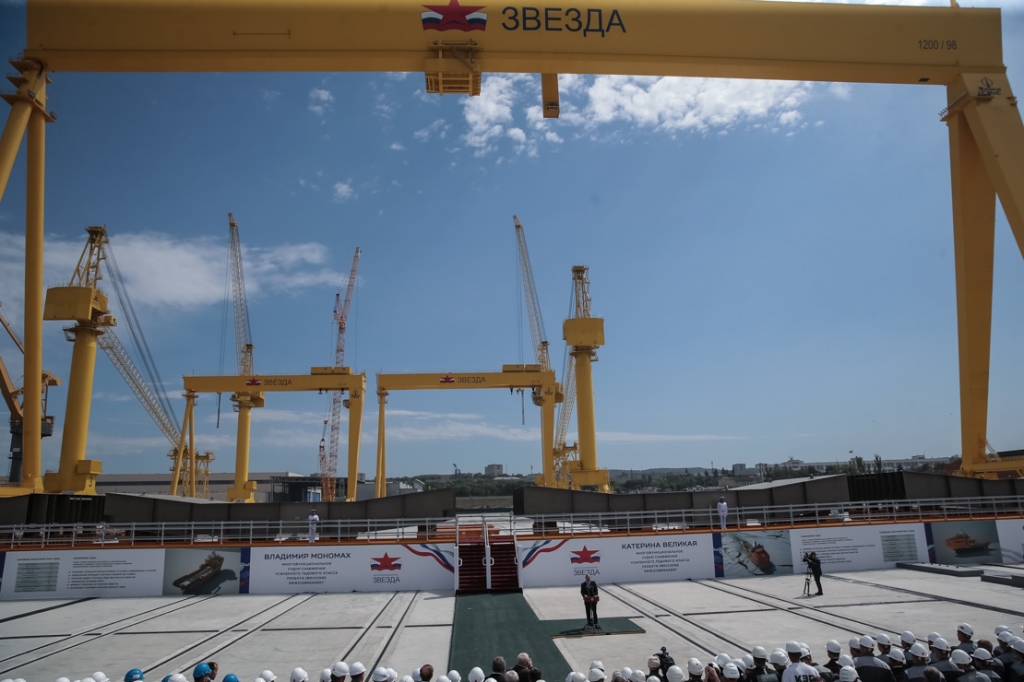 The second giant Goliath crane with a lifting capacity of 1200 tons, a height of 120 meters and a width of 189 meters was installed at the dry dock site of the Zvezda shipyard.
Photo: Press Service of the Government of Primorsky Krai

The shipbuilding enterprise is focused on the construction of ships of a special class, ships powered by gas engine fuel. Currently, the shipyard has signed contracts for the construction of 4 multifunctional ice-class supply vessels, 10 ice-class shuttle tankers with a deadweight of 120 thousand tons on gas engine fuel, 12 large-capacity Aframax tankers, an ice-class shuttle tanker with a deadweight of 69 thousand tons. With the exception of 2 tankers ordered by Sovcomflot, the shipyard was loaded by Rosneft. The long-term production program includes 136 vessels until 2031, orders for 57 vessels have been received so far.

Having discussed various aspects of oil and gas cooperation, including from the perspective of the human capital problem that is relevant for the Far Eastern Federal District (it was mainly FEFU scientists who spoke here), the participants expressed satisfaction with the work done and prepared for new meetings - in Moscow and St. Petersburg. 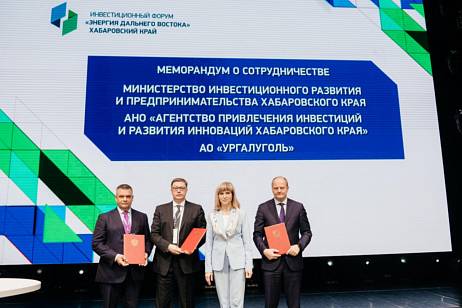 Khabarovsk Krai The forum is over, the energy remains