Sakhalin Region 14:46 During the day, the coronavirus was detected in 61 people on Sakhalin
13:43 The prosecutor's office will consider the complaint about the beating of the defendant in the Furgal case
Magadan region 13:27 Coronavirus restrictions extended in Kolyma
Khabarovsk Krai 13:11 Head of the Ministry of Transport in the Khabarovsk Territory resigned
Primorsky Krai 12:51 The best builders of Vostochny Port JSC were awarded in Primorye


Chukotka 12:16 Chukchanka boats will be sold in Chukotka
11:42 More than 700 companies received money to promote their online business in the Far Eastern Federal District
Chukotka 11:11 Restrictions on coronavirus extended until the end of summer in Chukotka
Amur Region 10:55 Coronavirus detected in 15 people in Amur region per day
Amur Region 10:51 Mishustin approved the idea of ​​additional financing of gasification of the Amur region


Khabarovsk Krai 10:42 LDPR banned from holding a rally in support of Furgal in Moscow
Irkutsk Region 10:39 Two candidates for governor of Irkutsk region withdrew from elections
10:20 The Ministry of Labor proposed to raise the living wage
09:54 Buckwheat has risen the most in a year in Russia
Chukotka 09:32 More than 8,6 million rubles to receive medical institutions of Chukotka

Will the products of the Komsomol Amurmetal go to the Star? 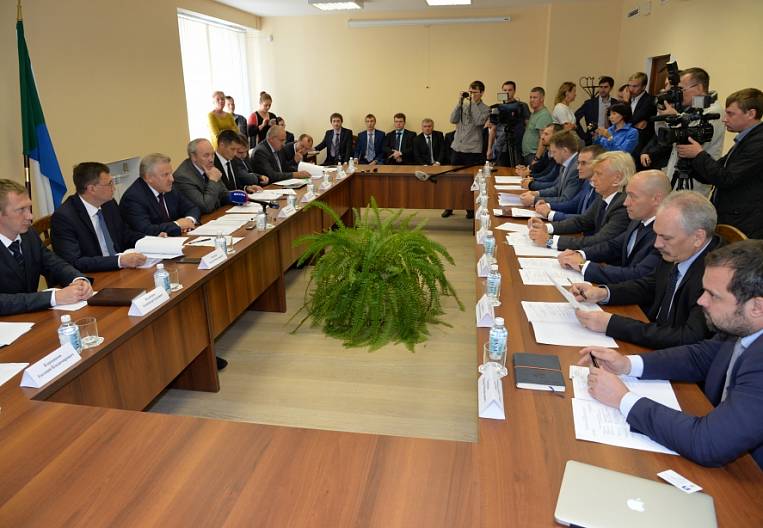 Khabarovsk Governor Vyacheslav Shport yesterday held a meeting on the fate of the long-suffering "Amurmetal". And, as colleagues reported, who went with the head of the region in Komsomolsk-on-Amur, after the meeting cheerfully talked about three potential investors. And one of them was even given the floor in front of cameras and voice recorders - I'm talking about the current State Duma deputy (and by a strange coincidence of the candidate for the State Duma deputies in the Komsomolsky District), Sergei Furgal.

The three investors of Amurmetal are, as everyone in the subject knows, said too loudly that In June and explained "b-Far East". In fact, only the local LLC "Torex", connected with the structures of the former business partner of Mr. Furgal, occupies an active position. The company wants for 1 billion rubles. To buy the so-called "single lot" of the production complex "Amurmetalla", which is put up for auction with the price of 2,9 billion rubles. (And so far unsuccessfully sold). Then you still need to invest 10-15 billion rubles. In the modernization of the rolling mill, which will allow the production of ship steel. And further all will be in a jade, representatives of the company believe.

When asked who will consume this ship steel, the answer is sure: for example, the Star Zvezda under construction in the Primorsky Territory.

Alas, the ship's steel "Amurmetal", according to the latest news, is not needed for "Star". On the fields of VEF-2016 it was announced that the Far Eastern Shipbuilding and Shiprepairing Center (controlled by Rosneft and Gazprombank, which are responsible for the construction of Zvezda) intends to build its own metallurgical plant for 330 thousand tons of rolled metal for the needs of the shipyard by investing in it astronomical 145,5 billion rubles. Under the enterprise, they even picked up a site in 400 ha in 100 km from the future shipyard. The shipyard at the first stage will consume 90 thousand tons of metal per year. "Amurmetal" to make steel for the ships that will build the "Star", can not yet (details here).

Mr. Furgal, it is true, Said "Governorates", That the news is not embarrassed. Having said literally the following:

- The idea to put in the Primorye rolling mill for the needs of the "Star" has been in the air for a long time - and this is a good idea. But there is no question of any competition with Amurmetal. First of all, as far as I know, [Primorye] will have completely different capacities, about 30 thousand tons of products per year, whereas a shipbuilding plant needs much more, and secondly, Amurmetal can easily manufacture and sell its products to the rolling complex [For further processing]. Thus, we get useful synergy, increase in value added and solid pluses.

Let's do a little about ship steel.

In 2013, the team of authors compiled the report of the expert council of the chairman of the military industrial commission under the government of the Russian Federation on the prospects of Russian shipbuilding.

It was noted there that:

Steel - this is the only component of the ship mainly domestic production. In the production of ship steel, Russia, in principle, does not need to cooperate with anyone. Russian shipbuilding consumes, according to our estimates, 500-700 thousand tons of steel per year for the amount of 15-20 billion rubles. The main suppliers of ship steel to the domestic market are the Severstal and Magnitogorsk Iron and Steel Works. There are [at the moment, probably more correct - there were] also supplies from Ukrainian metallurgical plants.

With the domestic hire of shipbuilders, no special problems yet. But it is worth considering that when modernizing production and building new shipyards, the technology of working with hire in shipbuilding will change greatly. For example, it will be possible to use a steel sheet of increased dimensions, which will require metallurgists to switch to a new product range.

Therefore, it is advisable to calculate the need for the construction of mini-metallurgical electric steel smelting plants, one for the shipbuilding cluster. For example, in the Leningrad region (or in Vologda at the CherMK facilities), in Primorsky Krai (especially considering the unfavorable situation at the only metallurgical plant in the Russian Far East - Amur) and on the Volga (under the power of the Nizhny Novgorod and Astrakhan clusters).

Specialized production will improve the quality of the steel used (steelmaking can produce alloy grades), and rolling production can produce the required dimensions, primarily the increased dimensions of the steel plate, which is required to speed up the construction of the vessel, reduce welds and improve the quality of construction. In the metallurgical segment, capacities for the production of steel castings and forgings can also be concentrated especially for the needs of shipyards.

As I understand it, Zvezda needs a thick sheet of a large format: "welding small-sized sheets has a bad effect on the cost of production," it gives rise to an increase in price of 50% in the cost of the hull and up to 10% - "in general on the ship," 2 said September " Rosneft "Igor Sechin. Hence, we need a mill "5000" (it can produce sheet rolling up to 5 meters in length and up to 36 meters).

A word to an expert (Evgeny Konovalov, an analyst at Metal Expert):

- Ship steel is carbon steel, the carbon content of which should not exceed 0,23% in order to ensure the required welding quality. It is slightly different from the constructional brands in chemical composition and mechanical properties. Such steel is special and must meet the requirements of deformation, but at the same time it is relatively inexpensive. At present, the development of high-strength and corrosion-resistant shipboard steels is promising in order to reduce the weight of rolled products and increase its service life. Such steel is used not only for the construction and repair of river and sea vessels, but also for lifting port equipment and offshore platforms.

Developing production opportunities, Russian metallurgists expect not only to increase domestic consumption, but also to gradually oust foreign suppliers. The volume of shipbuilding imports for the last 5 years decreased by 70% (from 26,8 thousand tons in 2010 to 7,8 thousand tons in 2014 year). The devaluation of the ruble further accelerated the work of Russian enterprises for import substitution in this market segment, the priority areas of which are now the construction of large-capacity vessels, drilling vessels and platforms, and pipelaying vessels. For this purpose, it is planned to build a shipbuilding complex Zvezda in Primorsky Krai, as well as modernize the shipbuilding capacities of Severnaya Verf in St. Petersburg.

In the structure of imports, in the context of steel grades steel ship of increased durability of D32 brand prevailed (in 2010 year it occupied 64% of total ship steel import, in 2014 year - slightly more than half - 51%) and rolled normal strength brand B (32% - in 2014 year, 2% - in 2010 year). Stamps of steel, technical requirements and range of ship steel are regulated by GOST R 52927-2008 "Rolled for shipbuilding from steel of normal, high and high strength. Technical conditions ». Ukraine remains the key foreign supplier of the ship's sheet to Russia, although its share in imports is declining (in 2010, Ukraine shipped 26,4 thousand tons of rolled products, in 2014 - 6,9 thousand tons). High ship quality, convenient logistics and low price allow Ukraine to remain a key importer in this segment, however, the share of supplies in consumption will decrease.

The largest producers of steel plates for shipbuilding steel in Russia are MMK Viktor Rashnikov (deliveries in 2015 - 86 thousand tons) and Severstal Alexei Mordashov (17 thousand tons). According to the information of MMK itself, in 2015, the mill “5000 ″ plant set a record for the shipment of commercial products - 953,3 thousand tons. As you can see, the shipbuilding needs went to less than 1 / 10 from the production of the mill "5000".

According to MMK, according to the railway statistics, by the results of the 2015 year due to the increase in the portfolio of orders for the construction of ships in the Russian Federation, the volume of deliveries of thick plates to Russian shipbuilding enterprises reached 114,8 thousand tons, which is 23,8% higher than the same period of 2014. The increase in demand was due to the production of nuclear icebreakers under the program for the renovation of the icebreaker fleet of the Russian Federation for the state corporations Rosatom and Gazpromneft.

The picture with ship steel, I think, is clear.

Question number one: Does Torex have 1 billion rubles, at least for the purchase of a "single lot"?

The revenue of LLC "Torex" for 2014 year - 675 million rubles. On the financial level, and says that the company has invested more than 400 million rubles in the purchase of a land plot for its project of a mini-factory for 250 thousand tons of steel per year near Khabarovsk. According to the data on the official website of Torex Group, An investment project for the construction of the Khabarovsk Steel Plant (HSPZ) with an investment of 5 billion rubles provides for the construction of a modern steelmaking plant with the output of 250 thousand tons of cast billets per year (with the possibility of increasing the output to 310 thousand tons). "According to the approved schedule of construction and commissioning of the HSPZ, the full capacity output in 250 thousand tons per year of steel products will be achieved in 2018 year", the company's website says. In a word, the company expects to raise 5 billion rubles in funds for the production project, but it hardly has an extra billion.

Question number two: does "Torex" have 10-15 billion rubles to upgrade the rolling production of "Amurmetal"? I think, definitely not.

Question number three: who will consume all these products? Counting on the "Star" under the existing scenario is unreasonable.

In the end, we have a good PR, but doubtful prospects.