Flame in the balls 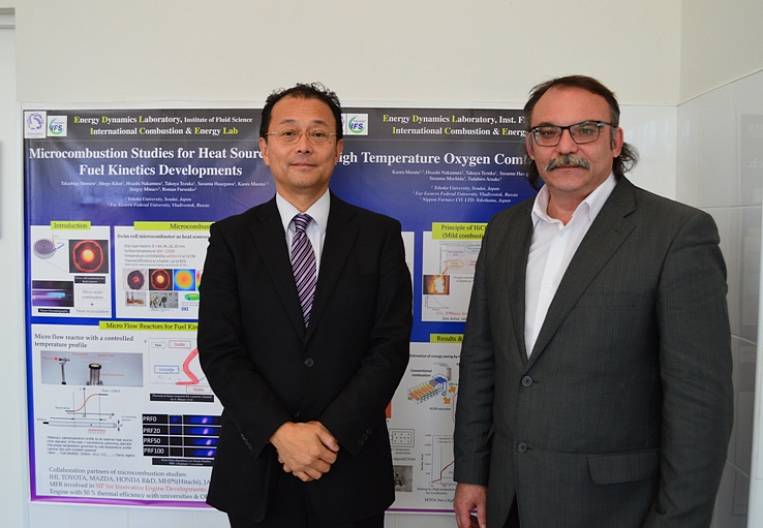 The Japanese scientist Kaoru Maruta on the basis of the Far Eastern Federal University (FEFU) started to implement the scientific grant of the Government of the Russian Federation.

A professor at Tohoku University for three years on Russky Island in Vladivostok will research new combustion technologies with the return of heat and mass, which allow to save burned fuel, reduce the size of combustion chambers, and therefore save on finished products and heating, and significantly reduce harmful emissions. substances into the atmosphere.

Maruta and his Russian counterpart Professor of Far Eastern Federal University Sergey Minaev told EastRussia.ru about the nuances of the new technology, its advantages over conventional combustion methods and how a random meeting in Siberia gave rise to research that could be the basis for a serious scientific breakthrough in modern energy.

Meeting the experimenter and theorist

Professors K.Maruta and S.Minaev told that their joint work began quite by accident.

“Fifteen years ago, in 1999, I worked in Novosibirsk, Sergei Minaev and I met by chance, because we sat in neighboring offices, discussed our scientific interests and found that they were common to us. I am an experimenter and my colleague is a theorist. So we started working together, ”recalls K. Maruta. According to S. Minaev, the Japanese scientist then organized a special seminar devoted to the problem of balls of flame, which interested him.

“At that time, very few people knew about the balls of flame - maybe a dozen people all over the world. In 1940, this phenomenon was predicted, but it was a purely mathematical find. We worked together, experimented with microgravity and balls of flame. Detailed experiments then carried out only in the United States and Japan. The results of the American experiments were not very good, and in Japan at that time there was a so-called “leaning tower”. This is a converted mine, into which 15 meter projectile fell, which was braked, and layers of weightlessness were created, ”says S. Minayev.

Professor K. Maruta worked on such unique equipment, exploring the limits of burning. Flame balls were first obtained there. Scientists needed to learn how to dilute the fuel with air, so that it continues to burn. This was important both in terms of economy and in terms of the environmental characteristics of the combustion process. All these experiments became the foundation of current research by a Japanese scientist and his Russian colleagues.

Grants of the Government of the Russian Federation are allocated in the amount of up to 90 million rubles each for scientific research for three years - from 2014 to 2016. - with the possible extension of research for two years. Grant allocation is carried out in the form of grants provided to higher educational institutions or scientific organizations on the basis of which research is carried out.

According to K. Maruta, in the next three years, under his leadership in FEFU, prospective studies of new combustion technologies will be conducted. The main laboratory for the work of a large Russian-Japanese team of scientists, which also included representatives of the School of Engineering and the School of Natural Sciences, was the FEFU International Laboratory of Combustion and Energy founded by S. Minaev.

"Now is a very important stage of our work - we are studying the combustion with the return of heat. Usually exhaust fumes are thrown from any device along with heat, but we use their temperature to heat incoming air or fuel before it burns out. This provides savings in fuel, since we conserve the heat of the gases, and also allows us to obtain a new burning regime - soft. The idea of ​​such burning was invented in the middle of 1990-ies. And the balls of the flame are directly involved in this process, "says Maruta.

He notes that scientists needed to theoretically study the limits of combustion, and at the same time ideas were born about soft combustion.

“At that time, the fundamental theory of soft burning was absent, and even now it does not exist. The researchers obtained some experimental results, but there was no solid basis for explaining why it burns so well. For example, in a conventional burner the heat is too strong, under the flame - a very high temperature, which gives the risks of damage, and in order to avoid them, you need to use a large chamber, ”said K. Maruta.

If you use soft burning, which means a low temperature, you can get by with a small amount of space. This mode allows you to evenly distribute heat throughout the volume of the camera and reduce its size.

Professor Maruta says that in this case the efficiency of the burners increases, so you can save up to 30% of fuel, getting the same heat flow. S. Minayev also notes the ecological characteristics of the new technology.

"How do we get warm in our homes? We light the gas in a large, the size of a room, a burner. This hot gas heats the pipes with water in the heat exchanger. At the same time, nitrogen oxides are emitted, the atmosphere is polluted. In soft burning technology, the amount of emissions is sharply reduced. At the same time, the new burner was absolutely silent. The process takes place in silence, like a miracle, considering that an ordinary burner is very noisy. The dimensions of the camera could be reduced, and the whole camera was just glowing, "says S. Minayev.

K.Maruta, explaining the uniqueness and novelty of technology, explains that soft burning can be of two types. "In one case, we use air. This project has already been introduced into production, and many Japanese companies use this technology. Now, about ten plants are being built there that will work on this principle, and many European countries have already expressed their interest in this technology, "the scientist says.

The second type of soft burning is using pure oxygen instead of air. The air contains nitrogen, and when it is oxidized, it gives harmful NO2, which is responsible for smog, and generally pollutes the atmosphere.

Therefore, the Japanese scientist is working on a completely new technology, when pure oxygen is heated and flameless combustion occurs. In this case, the dimensions of the burner chamber can be made even smaller, the process is more efficient, and the degree of environmental pollution is reduced to zero, since nitrogen is removed. At the output there is absolutely pure technology.

“For comparison: solar panels or wind turbines - the so-called sources of clean energy - are not entirely environmentally friendly installations. To create a solar battery, you must consume energy, that is, burn the fuel. To make a wind station, you need to smelt aluminum or use plastic. If we compare in this sense, the new combustion technology is truly clean, even in contrast to these environmentally acceptable technologies, ”says S. Minayev.

As for the economic effect, such burning is much cheaper - at least three times compared to traditional technologies. Plus, the new environmental requirements, which oblige production to reduce to the required limits harmful emissions, in this sense make the old technology even more expensive.

K. Maruta says that due to the fact that the burner is smaller, heat exchangers should be made less, therefore, investments in construction are reduced. Plus, the new technology will not require global retraining of personnel, which will also save money.

“It is necessary to tell about this technology to students of specialized specialties who will then work at the stations. So far, FEFU students are not aware of it, since the work has just begun and the technology is completely new. Research is needed, and then it will be possible to present it in the course of lectures. But already now FEFU graduate students-engineers participate in the seminars of Prof. Maruta and with great interest get acquainted with the new technology, ”notes S. Minayev.

Space prospects and a meeting with Putin

According to the preliminary estimates of the Japanese scientist, within two to three years it will be possible to begin practical implementation of the project in the production facilities. At the same time, if companies find use of such facilities, scientists are ready to start working with them almost immediately.

"We are already in talks, we are showing technology to companies. Unfortunately, there are no Russian companies yet, but the work has only just begun, "the scientist looks optimistically.

The plans of the Japanese - conducting experiments on balls of flame in space. “In zero gravity, the flame burns only in this way; instead of the usual flame, we will get points, foci of burning. And these points do not move, they “hang” in weightlessness. All these studies in space are needed for terrestrial purposes. We will explore the mixtures that consist of carbon dioxide, oxygen and a small amount of fuel - exactly the same composition as in the new burners. In such space experiments, we can get basic information and use it in practice, reducing the cost of combustion processes, ”says K. Maruta.

New technology can not only replace the old methods of combustion, but also use it wherever electrical heaters are used.

"By the method of oxygen combustion, the surface temperature can be controlled up to 1 degree, as in an electric heater. But with the new technology, we can save twice, and this would allow us to halve the cost of products. This is already done by one Japanese company, a new method using a small heating element is used in the food industry, and with it the enterprise at 80% reduced energy consumption. Accordingly, the cost of production has fallen almost 10 times, "- emphasizes the Japanese professor.

He hopes that this technology will become popular here in Russia. About this professor told the President of the Russian Federation Vladimir Putin during his visit to the campus of the FEFU last week.

“I explained this idea to Putin and spoke about the results of the experiment. The president attended my open lecture, and let us talk quite a bit, but I am very glad that he showed real interest in these experiments, ”K. Maruta said.
Tags: Japanese scholar Kaoru Maruta FEFU scientific grant of the Government of the Russian Federation Energy efficiency Technology flame in the balls combustion