The first start-up I will remember for a lifetime! 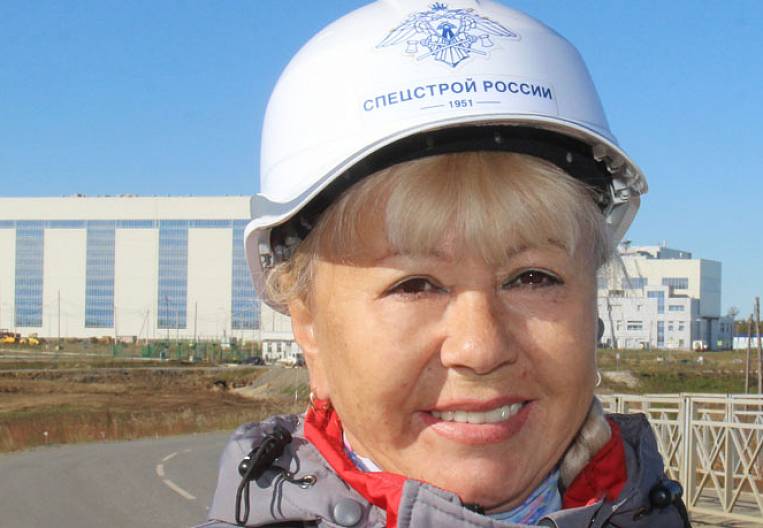 Pisareva Anastasia Arkhipovna among the first specialists of Dalspetsstroi arrived in the Amur taiga to erect the cosmodrome Vostochny. She was not afraid of the harsh climate, or the absence at that time of conditions for work and life. Strictly speaking, she went to the East to create all the necessary living conditions, and was already accustomed to the fact that the Dal'spetsstroevtsy are ready to turn the construction site from scratch. By her own admission, Anastasia Arkhipovna, there are no difficulties for her. Still, her total work experience exceeds 36 years.

She began her career in the 1980 year immediately after the end of the Magnitogorsk industrial-pedagogical college. I chose the profession of a builder because I really wanted to follow in my father's footsteps. The assets of Anastasia Arkhipovna include such strategically important facilities as the Neryungrinskaya TPP of the Sakha Republic, the Komsomolskaya CHPP-3 of the Khabarovsk Territory.

Since 2010, Anastasia Pisareva has been working in the Spetsstroy system of Russia. Considering the tremendous work experience and practical skills, she was quickly promoted to the position of the head of the construction and assembly site and was entrusted with the leadership of a team of highly qualified specialists.

"Dalspetsstroy - one of the largest construction organizations in the Far East, already then I realized that it is here that I can expect great prospects and, most importantly, interesting facilities", - remembers Pisarev.

So it happened. Under the guidance of Anastasia Arkhipovna at a high professional level and in a short time all construction and installation works were performed.

"After literally working a week in Dalspetsstroy, I was sent to Nikolaevsk-on-Amur Khabarovsk Territory, where we erected a church. The construction was very rapid, - Says Pisarev, - After she took part in the construction of socially significant objects of Khabarovsk. This is a kindergarten “Teremok” on 95 kids, and residential buildings, apartments in which were received by participants of regional youth programs, veterans of the Great Patriotic War. ”

Anastasia Pisareva participated in one of the most significant projects in the energy sector - the construction of the Sakhalin-Khabarovsk-Vladivostok gas pipeline. Dalspetsstroy performed work on Sakhalin Island at the facilities of the "Coastal Technological Complex" as part of the construction of the "Construction of the Kirinsky Technological Complex". The construction site was located in 120 kilometers from the district center - the village of Nogliki. The work was carried out in rather difficult conditions, which were determined by the geographic position itself, distance, large snow load, complexity with the delivery of materials, equipment and machinery.

In the ranks of spetsstroevtsev Pisareva took part in the construction of special objects almost throughout the Far East. But she could not even imagine that the most significant, responsible and interesting task awaits her ahead!

In January of the year 2012, Anastasia Arkhipovna is sent to Uglegorsk in the Amur Region (now Tsiolkovsky) in ZATO, where the Dal'spetsstroevs begin construction of the facilities of the future Russian cosmodrome. So little time before the planned first launch of the missile and so much to do!

The first step was to create conditions for the residence of builders. Here, the accumulated experience, hardening, lack of fear of difficulties are needed more than ever. Specialists of the branch Construction Management No. XXUMX made every effort to equip new comfortable housing for arriving specialists in the shortest possible time. So, the old half-ruined barracks town, built more than 713 years ago for the missile division, was almost completely reconstructed. And now the builders were already waiting for modern hostels, which were fully equipped with everything necessary for comfortable living.

And then the building began to boil. More and more new objects. Anastasia Arkhipovna enthusiastically set to work! She effectively planned and quickly coordinated the work of the construction sites and departments of the branch. But these were one of the main types of work, without effective implementation of which success would be impossible.

"Monolithic work, reinforcement, pouring concrete, - Tells about the front work on the construction site Pisarev, - and after all only to create the starting construction, which goes underground to the depth of 6 floors, there are about 160 thousand cubic meters of concrete laid and 31 thousand tons of reinforcement installed. "

For ordinary people, the "starter complex" is something for sure, completely cosmic. And for the builders of Dalspetsstroi and for Anastasia Pisareva, this is, above all, a building object. There is only the goal to build it, to fulfill the planned plans and to be in the schedule of works.

On the question in the construction of what exactly the objects of the launching complex took part, Anastasia Arkhipovna modestly responds that there are a lot of them and starts listing the object numbers according to the master plan: GP 1, GP 3, GP 5, GP 8, GP 16, GP 17 ...

Behind all these GPs are grandiose and unique in technical and technological terms buildings and structures. This is a starting structure, command post, a shelter for maintenance personnel, a technological block of kerosene and naphtha and many others.

Moreover, Anastasia Arkhipovna took part in the construction of a technical complex, where not only the Soyuz family launch vehicles could be serviced, but also other classes.

For Pisareva there are no unsolvable questions in the performance of the tasks assigned. Considering professionalism and multi-faceted experience, Anastasia Arkhipovna easily coped with the difficulties. It equipped with equipment, tools, materials, components, transport, labor resources, led construction and assembly sites. Provided performance of production tasks with excellent quality and in the shortest possible time, strictly controlled the schedules of work. She also worked with student detachments, who came to the East.

"It's easy to work with young people. If you know your work well, then there will be no difficulties. It was very nice when the guys sincerely thanked us, a kind of mentors. They say that in three years of study they did not learn as much as they learned in a few months of work at the cosmodrome - Says Anastasia Arkhipovna, “Still, the truth is sometimes practice is better and more effective than any theory.”

We can say that Pisarev knows the cosmodrome from A to Z. And now he continues to work there, but already at the construction of the railways of the cosmodrome at the station Promyshlennaya-2. Now there is a final stage of work.

During the construction of the Vostochny cosmodrome, many factors changed, the requirements changed, the number of subordinates changed, the deadlines for the work were constantly reduced. Work had to be almost non-stop. But thanks to her stubbornness and great practical experience, Pisareva found the right solutions, which fruitfully influenced the course of work.

Thanks to the selfless labor of such ordinary people from the first sight 28 April 2016 and the launch of the launch vehicle Soyuz-2.1a from the new spaceport Vostochny in the Amur region.

"I watched the first launch from the shift camp. And of course I will remember for a lifetime, because we builders understood the high importance of the object and that we are responsible for the result. Of course, I was proud of the fact that my branch and I are involved in this important event for the whole country, "- Remembers Anastasia Arkhipovna.

She was awarded the Medal of the Order for Services to the Fatherland, II Degree for services in the field of construction and many years of honest work, by the Decree of the President of the Russian Federation that the head of the construction and assembly department of the Dalspetsstroy branch of the Dalspetsstroi branch was recognized at the workplace. All at the same East, which has already become so familiar over the years.