"Pavel Leonov" tied Sakhalin and the Kuriles even more tightly

Residents of the Sakhalin Oblast now call these three ships "three whales" - motor ships have become a guarantee of transport accessibility of the Kuril Islands. They ensured the stability of passenger traffic between Sakhalin, Shikotan, Kunashir and Iturup. On Sunday, October 3, the third ship - "Pavel Leonov" - returned from the first voyage from the port of Korsakov to Kurilsk and back. What does it mean to enter the line of this ship for the Sakhalin Region - in the material of EastRussia. 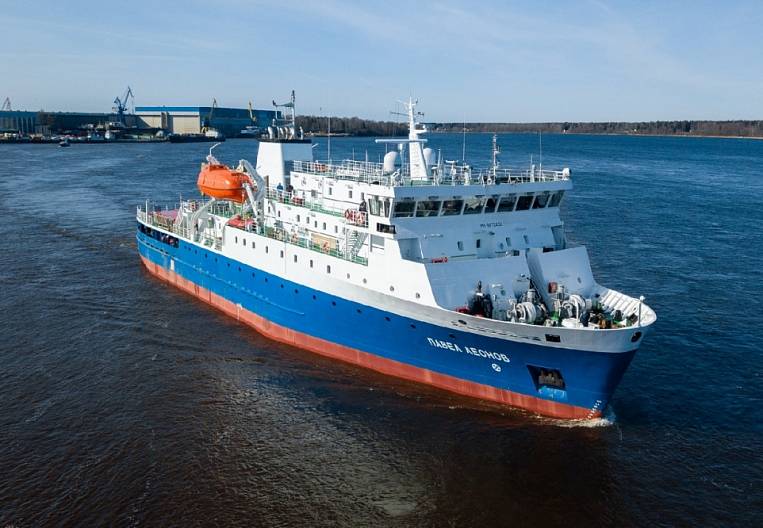 The brother of the already sensationalized this summer "Admiral Nevelskoy", "Pavel Leonov" came off the stocks of the shipyard of the Nevsky shipyard. The cargo-passenger ship was built specifically by order of the government of the Sakhalin region - an important route has already been identified for the ship. From Shlisselburg, the new ship first got to St. Petersburg, and then set off along the Northern Sea Route to Sakhalin. 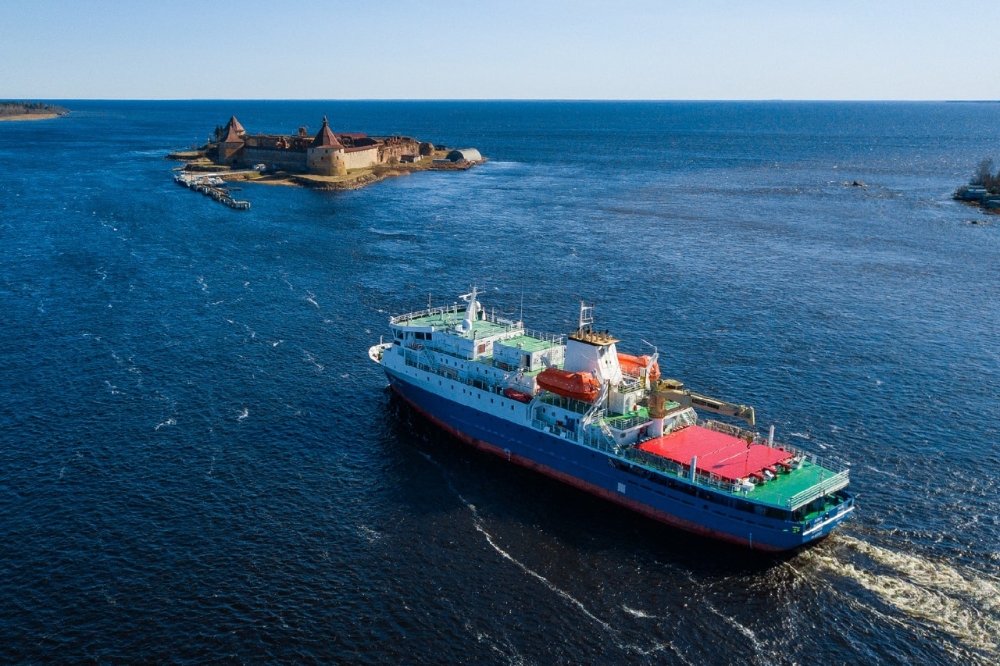 For the passage of "Leonov" along the Neva, the Ladoga bridge was raised and the sea gates of Murmansk were opened, the Sakhalin residents monitored its movement using navigation services and predicted its arrival in the island region. And finally, it happened: on September 16 "Pavel Leonov" was met in the port of Korsakov. 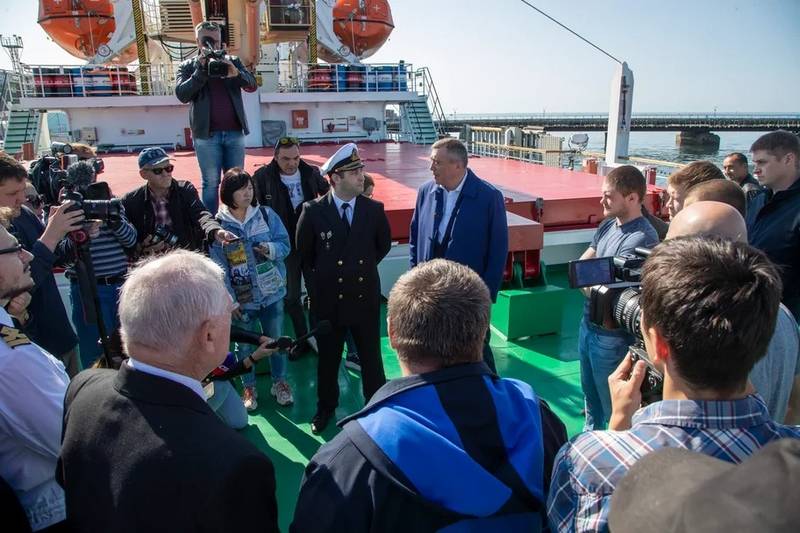 Not yet having time to go to service, the ship set the first record: it arrived home a week ahead of schedule. "Leonov" was led to Korsakov by a team of 18 people - the captain and his assistants, machinists, passenger service and a team of cooks - the whole brigade already had the experience of traveling between Sakhalin and the Kuril Islands. Captain Roman Kovlyakov helped to lead the ship "Admiral Nevelskoy" to the region two months earlier, and professional cooks managed to work on a veteran of sea freight and passenger transportation - the motor ship "Igor Farkhutdinov".

After the arrival, "Leonov" went for maintenance. And already on October 1, the ship took on board the first consignment of cargo and passengers. The ship performed its debut voyage in a truncated form, on the Korsakov - Kurilsk - Korsakov route. On this voyage, only residents of Iturup met "Pavel Leonov", but the next step is acquaintance with Kunashir and Shikotan: 146 passenger seats will not remain empty, given the need of Kuril residents for regular transport links with Sakhalin. 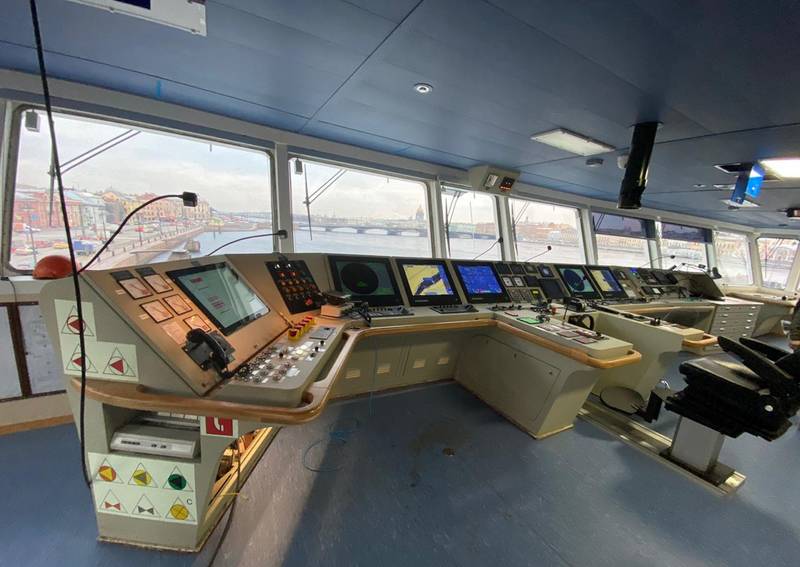 “Increasing the transport accessibility of Sakhalin and the Kuriles remains one of the main tasks of the regional authorities - this is, first of all, the solution of social problems. For the Sakhalin region - the only constituent entity of the country located on the islands, sea traffic is the main one. In our case, without the participation of sea transport, it is impossible to fully organize inter-municipal transportation. In the field of maritime transport, the implementation in the current year of measures for the construction of cargo-passenger ships had a significant impact on transport accessibility. "Pavel Leonov" is the second of two, built specifically for the island region, within the framework of the program "Social and economic development of the Kuril Islands for 2016 - 2025". With the release of new cargo and passenger ships, we significantly increase the possibilities of cargo and passenger transportation. Residents of the Kuril Islands will be able to get home, to work, on vacation at the time most suitable for them, and additional opportunities have appeared for the transportation of goods, containers, and therefore we believe the difficulties in delivering goods to the Kuril Islands will be completely removed, "the governor told EastRussia Sakhalin Region Valery Limarenko. 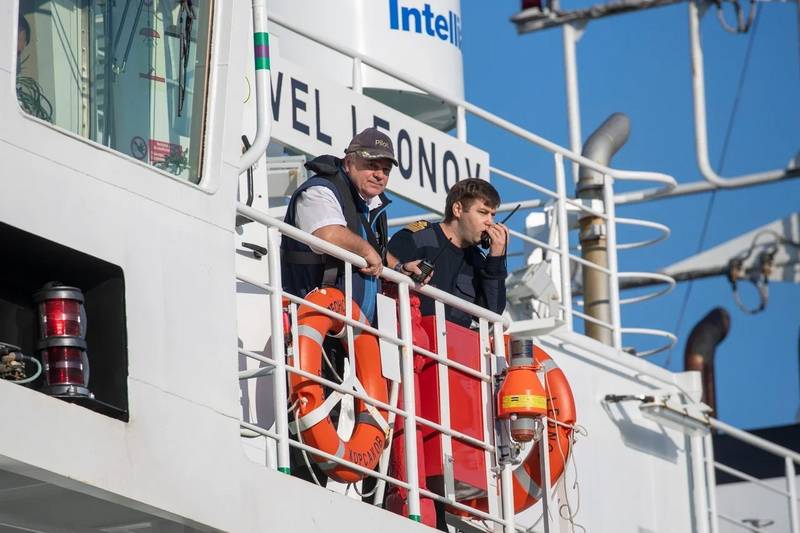 A trip on "Pavle Leonov", as well as on his fellow motor ships, is the most affordable way for the islanders to get from the Kuriles to Sakhalin and back. The cost of a one-way trip is 3 rubles for a place in a third-class cabin, 255 rubles for a second class and 4 rubles for a luxury cabin. A cargo-passenger ship, traveling at a speed of 880 knots per hour, gets from Korsakov to Kurilsk in 8 hours, and to Kunashir and Shikotan (in the South Kuril region) - even faster. At the same time, passengers travel in comfort, and the cooks provide them with fresh and tasty food: the supply of food for Leonova is purchased for two weeks when the cabins are fully loaded. 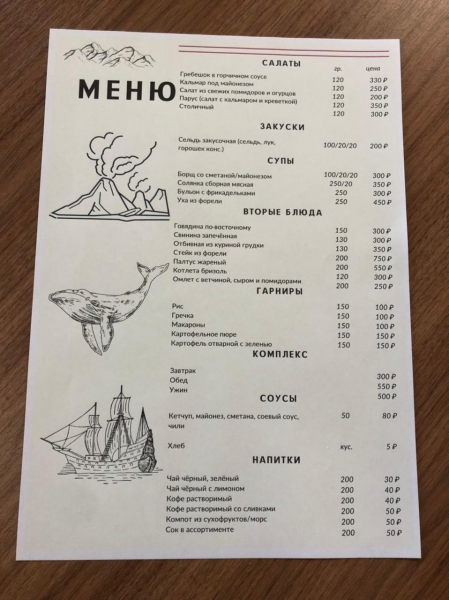 “The ship provides comfortable cabins, which have a shower, TV, refrigerator. There is also a double cabin for mothers and children and a cabin for people with disabilities. Meals are organized for passengers on board the ship in the ship's cafe, ”said Edward Rea.

It is expected that "Pavel Leonov" and "Admiral Nevelskoy" will remove the rush demand for tickets, which the Kuril residents were still associated with travel to Sakhalin. Until this year, the only motor ship "Igor Farkhutdinov" cruised between the islands delivering not only passengers - it transported food, mail, fuel, building materials, cars, as well as a lot of other goods necessary for the life of Kuril residents. And with the beginning of the summer tourist season, the air carrier was forced to introduce additional flights: travelers poured into the Kuriles in an endless stream, sometimes leaving the inhabitants of the islands without tickets. Now, the head of the Kuril region Vadim Rokotov believes, the situation will calm down.

“When the Admiral Nevelskoy came to our port, we were very happy: we met him with an orchestra, sang and danced. Then “Pavel Leonov” came - and this is already perceived as the norm, although we are very pleased. On the one hand, it has become something commonplace. But also joyful, of course, too. Over the summer we have suffered enough: tourists piled up on Iturup, the existing steamers were jammed, and in fact they also carry cargo to us. So the appearance of the third ship in any case will have a positive effect on the life of Iturup. We are certainly glad. As the head of the municipality, I want to note that now there is complete calm, stability and confidence in the future. You can safely plan for the future without fear of disruptions to transport links and delays in freight deliveries. We now have enough capacity for sea transport, and this is the main thing, ”Vadim Rokotov, head of the Kuril city district administration, shared with EastRussia. 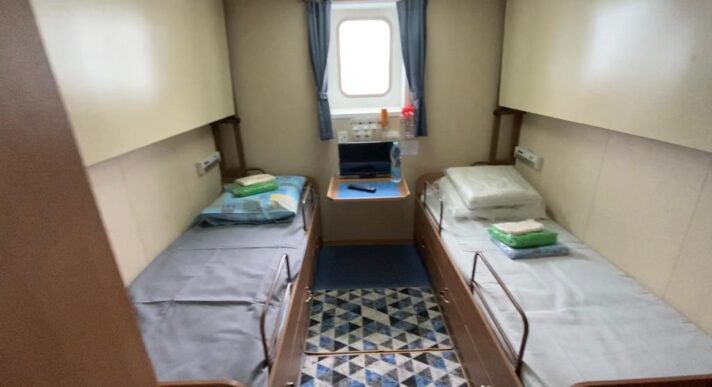 The Pavel Leonov set off on the maiden voyage with free cabins: there were not many passengers who needed to get to Iturup. But Sakhalin and Kuril residents, who managed to share their debut with the new ship, were very pleased. The islanders liked everything: food, teamwork, and cozy resting places.

“I have never in my life gone out to sea or sailed on a ferry. And when I had such an opportunity - both financial and life - I thought: "Why not?" Moreover, I really wanted to see the new ferry from the inside. In general, the impressions are positive. The ship is new, everything is in perfect condition. Comfortable four-bed cabins, absolute cleanliness, all the amenities that a person needs on the way. Everything is conducive to the fact that on the way you do not worry about anything. The food is not the cheapest, but everything is very tasty: I felt like in a real restaurant, only on the water. The staff is a separate story: professionals in their field, extremely competent and friendly. They will prompt everything, conduct it everywhere, calm down. I was on a sea voyage for the first time and was very afraid. The senior flight attendant talked to me, reassured me, persuaded me not to worry. Such a kind attitude simply captivates and makes it clear that your trip will be wonderful, "said Tatyana Yerkalieva, a Sakhalin woman, to EastRussia. 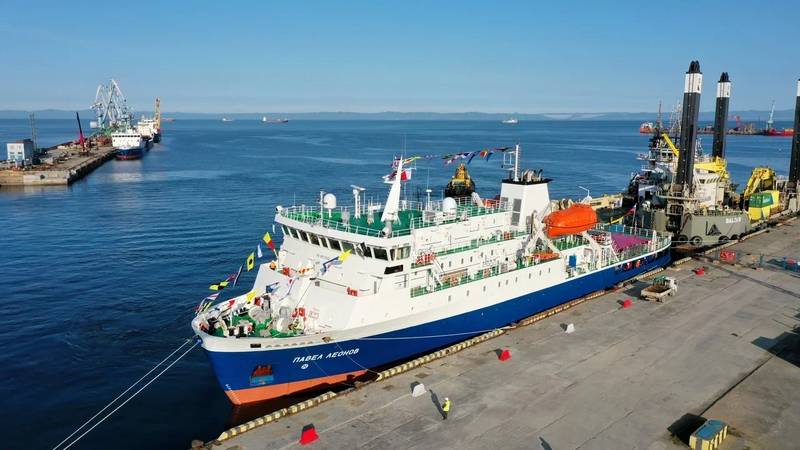 Now "Pavel Leonov" has entered the daily work schedule, and has already entered the schedule of motor ships until the end of 2021. The itinerary list of the vessel was approved by the Sakhalin Ministry of Transport. By coincidence, Leonov will also meet the New Year on the way: it will embark on the Kurilsk - Korsakov flight at 14:00 on December 31. Only at noon on January 1, the ship will return to Sakhalin. Thus, the passengers of the new ship will have the opportunity to raise a glass of champagne in the middle of the Sea of ​​Okhotsk. 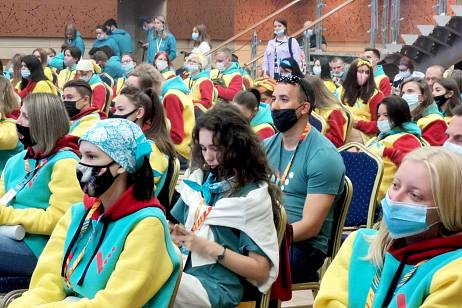