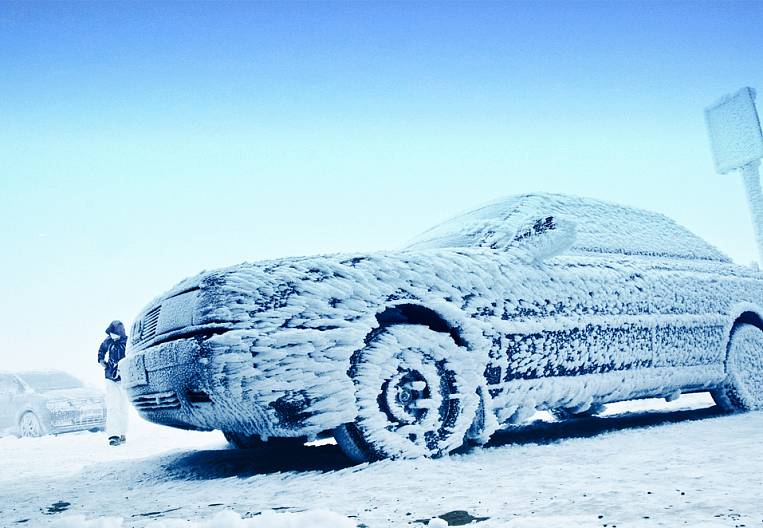 Severe Yakut frosts take not only people by surprise, but also technology. In winter, car owners simply do not turn off their engines - and this leads not only to wear and tear, but also to increased costs. Add to this constant emissions: in cold weather, smog is added to the fog, visibility on the roads deteriorates and, most importantly, air quality. The entrepreneur Artem Chemposov decided to change the usual state of affairs.

The company "Sakhateplomekhanika", created by Artem Chemposov, this year became a resident of the State Autonomous Institution "Technopark Yakutia" and received the status of "Innovatively active enterprise".

- Artem, how the abstract idea of ​​warm parking has become a concrete prototype?

- I thought about the problem four years ago, when I had to rent a garage for my car throughout the whole winter. Anyone who rented or rented a garage knows what amounts are spent on rent. And also overhead: you have to get to the garage, which is not at all in the center of the city, then leave ... It's good, if friends are thrown to the house, and so it was necessary to use the services of a taxi. One of these days, I came up with an idea: what if I could somehow warm up the engine compartment? If it is warm, then the car can stand up all night, right at the entrance of your house. It's great, is it? The idea did not bother me. Of course, first of all I shared an idea with my friends. Here and raced! A team was formed that worked simultaneously on four ideas. The first to notice us was the Institute of Physical and Technical Problems of the North of the SB RAS, he took an active part in the tests we conducted, helped organize exhibitions. At first, Ivan Danilov, the director of the operational and technical service of the Administrative and Economic Support Department of the President and the Government of Yakutia, provided us with the territory for testing air heating. The initiative group from Yakutskenergo also supported the project.

- It’s not enough to have an idea and devote all your thoughts to it. What happened next?

- I put my thoughts on paper, designed the project and a year later I delivered my thesis at a scientific conference at my home university. The diploma carried a solid name: “Development of a mobile heating system for motor vehicles by a gas heat generator in the city of Yakutsk”. One year later I became a resident of Technopark Yakutia.

- What is the principle of parking with electric heating? Under the asphalt is the heating cable laid?

- No, everything is like in ordinary parking, except that each outlet is connected to a socket with a special metal protective box that does not bend, and machines that disconnect the power supply when the power is increased and in case of a short circuit. But there is a nuance: not everyone can connect. To do this, you need to install additional equipment - a special coolant heater. The fact is that the engine has so-called cooling circuits. A special liquid circulates in them. Contours protect the engine from overheating. Winter lasts up to eight months, and with the help of a heater it is possible to use a cooling circuit, on the contrary, for heating the engine. It is desirable that the system be without moving parts, which reduce the reliability factor.

- But this technology is already being applied, there are liquid heaters..

- Liquid heaters - expensive. In addition, they also work on fuel, so they cannot be used in non-ventilated garages: combustion products can accumulate in the cabin. They also use battery power to operate the pump and fans. If it is not sufficiently charged, in the morning you will not start the car. With the existing electric heating systems, the situation is as follows: Chinese products dominate the market, as always. This is the so-called pump - they pump the coolant forcibly. Their installation seems simple, but it is not. If an inexperienced person installs the system himself, then he can simply ruin the engine.

- What is the peculiarity of your technology?

- We empirically selected the optimal equipment and, most importantly, developed a system for adjusting the heating for each car brand. We configure the thermostat and the control unit for each vehicle so as not to disturb the natural circulation in the cooling circuit. This ensures the safety of the engine.

In addition, together with our friend Aleksey Proshutinsky, we developed an original billing system for connecting electricity to outlets: depending on where you are, you choose the outlet you need and connect it. You will be able to pay for the use of such car parking using a mobile phone.

If there are a lot of such parking lots, people will be able to increase the life of engines, save fuel, money and time, and save health - motorists prefer to dress easily, and to cool in a cold car is simple.

- And winter covers for cars? How will they attract buyers?

- There is no such product in our republican market. Each driver heats his car as he can. There are those who sew a cover for their car, but there are not many. We make covers of modern heat-reflecting materials. They are multi-layered, the layers are fastened together by special seamless technology. All this allows you to save heat in the car for eight hours at a temperature of -55 C. At the same time, the cover is light and takes up little space when assembled. If you use it as a supplement in a parking lot with heating, you can save electricity.

- Machines are covered with covers, air ducts are brought to them. Hot air begins to circulate through them periodically. It is supplied by a mobile self-propelled heat generator or the Warm Yard complex. The air is dried, so there is no condensation under the covers, which ensures the safety of equipment. Such technology can be used where there is no possibility to connect to electrical networks. Our mobile self-propelled heat generator can also be used for servicing bulldozers, excavators and other equipment at industrial sites of enterprises producing coal, oil, gold, diamonds and other minerals.

Imagine: a bulldozer broke in the tundra, it takes time to repair. The technique gets cold, the driver of the bulldozer, too. In the cold for a long time you will not work with a wrench. It turns out that the equipment must be towed to the workshop. It takes time and distraction technology. In general, a laborious process.

And our self-propelled unit can come along with the repair team. The bulldozer can be covered with a dome and begin to serve hot air under it - you can make repairs in the field. The installation can be used and. For heating building structures and sites. The construction season is short, some types of work can not be carried out at a negative temperature. Our mobile heat generator will create the necessary temperature regime when installing the structure or performing other construction work in the winter. Applicable design and for heating the premises in emergency situations. If suddenly in the middle of winter in an apartment building or an administrative building due to an accident, heating will turn off, then our mobile installation will be able to heat the house for the necessary period of repair work.

- But there are portable heat guns, air heaters ...

- They - both electrical and liquid - are inferior to our power plant. In addition, the electric will overload the network, while the liquid will discharge the combustion products during operation, carbon monoxide begins to accumulate in the room. A long time to work in such conditions and even more so you can not live. And our installation does not use exhaust from combustion in heating. Only hot, dried air is served.

- Do similar technologies apply in Russia or abroad?

- No, except that similar electric parking lots are used in Alaska. We created our developments taking into account the peculiarities of our republic, but we believe that they will also be in demand in other northern regions of Russia and, possibly, abroad.


How many in numbers?