The spread of a new strain of coronavirus forced to close the border in the Far East, because of this, vegetables from the PRC stopped coming to the Far Eastern Federal District, prices soared several times. After opening the checkpoints, the problem seemed to be solved - vegetables from China appeared at the shelves at affordable prices. But there it was - this week stocks of imported products began to run out, but there were no new shipments. Deliveries this time are blocked by the quarantine service of the Peoples Republic of China. 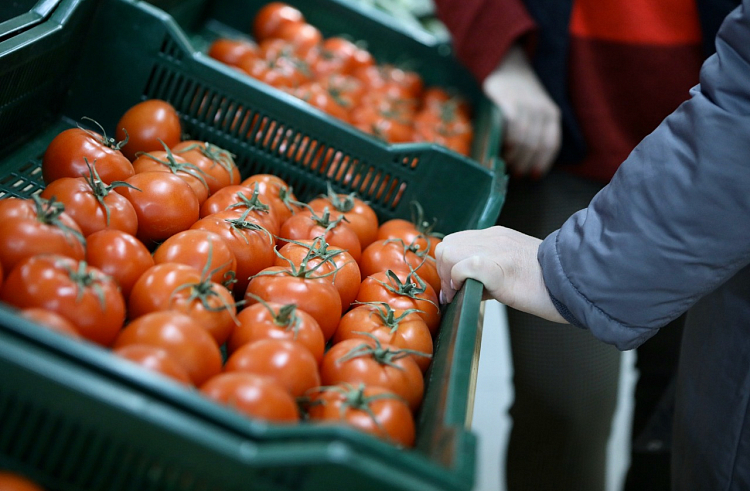 Unscrupulous entrepreneurs took advantage of the situation at the border, raising prices for vegetables and fruits at their outlets by 30% - 200%. Residents of the Primorsky and Khabarovsk Territories, the Republic of Buryatia, the Sakhalin, Magadan and Amur Regions, as well as Transbaikalia and Jewish Autonomy complain of unjustified price increases.

“I think that prices have not increased by 30%, as they say officially, but by 100-150%. Everything has become more than twice as expensive. Today, one big cucumber weighed almost - 90 rubles. I didn’t take it. Half-rotten Azerbaijan tomatoes at 430 rubles and Russian tomatoes at 350 rubles. It’s impossible to choose - I wouldn’t take such spoiled ones for the money, even at a discount. Sweet pepper - 400 rubles, mango used to cost 199 rubles, and now 600. Tangerines from Syria cost somewhere around 250 rubles. Everything is expensive, and the choice is just awful! Ecuadorian bananas alone are cheap - 68 rubles each. We can say that there is really nothing, a salad of fresh vegetables cannot be made, and if you fork out, it will come out at the price of a salad with seafood, ”complained a resident of Vladivostok Nadezhda Belikina.

According to the Federal Antimonopoly Service, last week a stable situation with food prices was in Yakutia and Chukotka, a slight increase in prices for tomatoes and cucumbers was observed in the Magadan, Sakhalin regions, Buryatia and Transbaikalia. The largest increase in prices for vegetables was recorded in the Jewish Autonomy, Amur Region, Primorye and Khabarovsk Territory. Official data on the monitoring results will be received by the FAS on February 17.

“Chinese vegetables and fruits have disappeared from the shelves, and those brought from other countries have remained. Naturally they are more expensive. But, it seems, now the shelves are slowly filling up again. I can't say anything about the excitement or something else like that with Chinese products. Basically I buy greens and vegetables, local greenhouses, so I haven't experienced anything like that, ”said Elena Khe, a resident of Yuzhno-Sakhalinsk.

The authorities of the Primorsky Territory this week said that the Chinese side requires suppliers to provide certificates of origin for products, as well as loading only one name of goods into one vehicle. Logisticians and representatives of trading companies are sure that if these new requirements continue, Chinese vegetables will not come to Primorye.

Already at a food base they are reporting a shortage. After the border was opened, 350 tons of products were brought into the region, but it was almost over. Vegetables from Turkey, Israel, Kazakhstan, Iran, Uzbekistan go on sale, however, due to complex logistics, they cost much more. Almost all regions of the Far Eastern Federal District made a bet on reorienting supplies, but this had little effect on prices.

The general director of the wholesale and retail base Druzhba, located in Ussuriysk and supplying the regions of the Far East with seaside and Chinese agricultural products, said that this is the first time that this situation has been observed.

“The last time vegetables were brought in four days ago. There has never been such a shortage of fruit and vegetable products in Primorye, ”said Yevgeny Kim.

Doctor of Economics Nikita Krichevsky is sure that too rapid growth in the cost of vegetables in the Far Eastern Federal District is a vivid example of a cartel conspiracy.

“The rise in prices in the Far East speaks only of the greed of networkers. What is happening now is a general trend, a convenient reason to cut down an extra pretty penny. There are supply disruptions, which leads to a decrease in the volume of products on the market, ”explained Krichevsky.

The economist believes that a similar situation in the market occurs when the country does not have normal state regulation.

“Cartel conspiracy is on the face, and the situation with coronavirus is just an excuse. Judge for yourselves, because there is no evidence that the coronavirus is transmitted through vegetables or along with an incoming truck, ”the economist noted.

In his opinion, in this case, the regional authorities showed their inability to regulate the sharp rise in prices. Krichevsky believes that the situation must be corrected manually.

“Of course, retail raises prices, but, as a rule, not on such a scale as a wholesale link. Where is the power looking at this time? ”- the doctor of economics is indignant

On February 13, specialists from the Ministry of Industry and Trade of Primorsky Territory, as well as employees of the FAS administration, checked two large retail chains in Vladivostok - Remy and Sambury. It turned out that trade margins there ranged from 5% to 20%, which is permissible.

“Trade is a self-regulatory industry, if you raise prices, your competitor will respond instantly and make an extra charge,” comments Dmitry Suleev, owner of the Remy supermarket chain. - The planned margin for fruit and vegetable products is 15-30%, and it allows you to make a profit from a turnover of 1%. If prices have risen higher than 30%, then this is usually a question for wholesalers. Now in Primorye, demand exceeds supply, so prices are rising. ”

Sellers note that the situation has returned to normal, but there are still slight fluctuations in prices.

“We are making maximum efforts to prevent the absence of products on the shelves and a significant increase in prices in our network. Of course, there are shops whose names I do not want to name, which speculatively use the situation with coronavirus and significantly raise prices for vegetables and fruits. We are on the lookout at the government of Primorye, therefore we cannot afford to unreasonably raise the cost of production, ”said Elena Aleshkina, marketing director of the Fresh 25 chain of supermarkets.

The owner of the outlet in Khabarovsk, Vadim Akhmetov, assures that the prices in his store are the same as always, and urges his colleagues to pay attention to greenhouse products.

“We are not afraid of inspections, we are not raising prices. In addition to vegetables from China, there are many acceptable alternatives. For example, there are enough good products from greenhouses, they are better in quality and at a price not much more expensive, ”said the entrepreneur.

However, if stores still have products from China, then suppliers are already running out. According to Dmitry Volkov, the general director of the Family company, which supplies products from China, until around February 5th, the trucks passed through the border in normal mode, but after that the difficulties began. He attributes this to the fact that new phytosanitary requirements from the PRC authorities have come into force. The last trucks with difficulty missed only February 7th.

“For comparison, in January 235 trucks drove from China to Primorye. In the first half of February, only 51 cars entered. Those trucks that arrived in Primorye from February 3 to 7 were supposed to pass another 30-31 January. Today, many cars have accumulated at the border again, ”said Dmitry Volkov.

What is happening at the border, according to the entrepreneur, can be called a war of phytosanitary services in Russia and China. It all started in August, when Russian services tightened the import of stone fruits - apples, nectarines, pears. Then the situation repeated with citrus fruits, but already in January. The Russian and Chinese sides tried to agree on the rules, but failed. As a result of disagreements of phytosanitary services, the goods on the shelves ended, which caused an increase in prices and a shortage of vegetables.

The entrepreneur noted that most of the Chinese fruits and vegetables go to the Far East market. The main share of imported products goes to Russia through the border crossings of the Primorsky Territory.

“Only a small part of the products goes by sea from Primorye to St. Petersburg. As a rule, these are ginger, garlic, citrus fruits. Therefore, retailers in the European part of Russia to give up Chinese products is not difficult - there is something to replace. And in our Far East there is nothing to choose from, there is nothing to replace Chinese products with. Apparently, none of our government cares that we here in the Far East were left without vegetables and fruits. But millions of people live here, ”said Dmitry Volkov.

Since the main supplies of Chinese products go through Primorye, they are most concerned about interrupting them there - the regional authorities intend to initiate a working meeting of the Rosselkhoznadzor with the quarantine service of China and achieve the resumption of supplies of fruit and vegetable products. In other regions, the authorities are silent on this matter.
Tags: deficit vegetables from China China Far East border overpricing