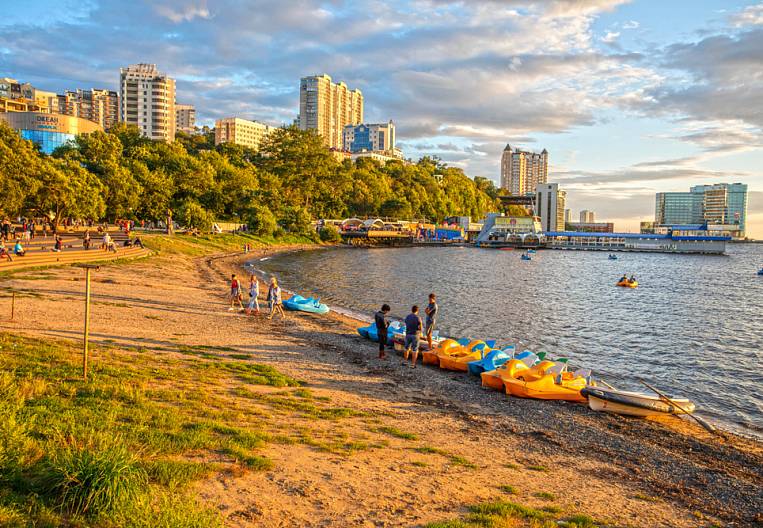 In the annual rating of the subjects of Russia on the development of tourism, compiled by the Ministry of Culture, the regions of the Far Eastern Federal District occupy very modest positions. Following the results of 2017, only the Primorsky Territory showed a good result, taking 23 place and getting into the group "Regions with relatively high indicators of tourism development". In Khabarovsk Krai, the indicators of development of the tourism industry by the experts of the Ministry of Culture are estimated as average - 47 place. Next to it on 49 is the Republic of Sakha (Yakutia). The Sakhalin region (54 place), the Amur region (62 place), the Kamchatka region (63 place), the Magadan region (74 place) entered the same group of regions with average indicators. In outsiders were the Jewish Autonomous Region (83 place) and the Chukotka Autonomous District - took the last 85 rankings.

Among all subjects of the Far East, Primorsky Krai is the most attractive region for both domestic and foreign tourists. According to the regional border department of the FSB of Russia, 2017 thousand foreign citizens visited Xinxi Primorye, which is 518 percent more than in 12 year. Among them, the leading positions are occupied by the citizens of the PRC. From this country 2016 thousand people arrived to the region. According to the candidate of economic sciences Nikolai Lipatin, such interest of the Chinese to the Primorsky Territory is caused, among other things, by the opportunity to play in the casino.

- Education in 2009 year near Vladivostok gambling zone "Primorye" was the right decision. The powerful growth of the Chinese economy has led to an increase in the well-being of the population, and now the Chinese are willing to spend earned yuan on tourist trips, and given the love of the inhabitants of the Middle Kingdom for gambling, the opening of the Tigre de Cristal in the bay of Muravinaya in 2015 was necessary, "Lipatin said.

Director of the tourist information center of Primorsky Krai Daria Guseva says that the main visitors to the gambling zone from China are residents of the southern provinces.

- In Primorye from the south of China, wealthy tourists who play in the casino. They also book tours with pleasure on rafting, fishing and traveling in the taiga. In the general flow of tourists from the PRC they make up a smaller part. Most of the guests from the Middle Kingdom are residents of the northern provinces who come to Vladivostok for an 3-4 day to shop, try Russian cuisine and buy various dietary supplements from marine life, "says Daria Guseva.

Vladivostok is the main tourist site in Primorsky Krai. The efforts made by the federal authorities for its reconstruction at the APEC summit in 2012 gave very good results. In 2015, National Geographic magazine included it in the top ten most beautiful sea cities in the world, and Forbes in the top ten best Russian cities for recreation.

In addition to the capital of Primorye, tourists are attracted by Safari Park, the National Park "Land of the Leopard", the Dragon Park, Pidan Mountain, Petrov Island, Triozere River Bay and many other places with which the Primorsky Territory is so rich.

In the 2014 year, Rosturizm presented tourist brand "East ring of Russia". Its goal is to unite the attractions and interesting events for tourists 12 regions of the Far East and Transbaikalia. It is expected that as a result of the project implementation, tourist and recreational clusters and a supporting infrastructure will be formed.

Each of the subjects of this itinerary presents in it unique tourist sites and attractions: for example, in Yakutia - the Lena Pillars, in the Amur Region - the spaceport "Vostochny", on Kamchatka - the Valley of Geysers. In addition, the project involves linking tours to various activities that are characteristic of each of the seasons. So, having gone on the Eastern Ring of Russia in the winter, you can visit the festival of national cuisine Buzyn Bayar in Buryatia, watch the ice sculpture contest "Ice Fantasy" in Khabarovsk, participate in the traditional dog sledging race "Beringia" in Kamchatka. According to the authors of the project, interregional routes should become the locomotive of the development of the industry within each of the regions.

However, the formation of this single tourist route is slow. Only in 2016 year was signed an agreement on interaction between the parties to implement the project between the Ministry of Culture of Russia, Rosturizm and interested regions. In May 2018 at the Fourth Pacific Tourist Forum, representatives of the Eastern Ring of Russia noted that thanks to subsidized tickets and effective promotion, the interest in the route grew. However, until the full realization of its potential is still far away.

According to Darya Guseva, now the Eastern Ring of Russia is of particular interest among Europeans. It is they who are happy to purchase tours along this route, and its presentation in Australia attracted tourists from this country as well.

Each of the regions of the Far East Federal District has its own unique historical and cultural sites that are very attractive for tourists. However, providing an acceptable level of service and decent infrastructure is not easy for the Far Eastern regions. In addition, the impact of high transport costs.

"The development of domestic tourism is very much hampered by high prices for air tickets," says Nikolai Lipatin, PhD in Economics. - The Far East and Siberia are poorly populated, and therefore can not provide for themselves in the mass tourist flow. It is necessary to attract people from the densely populated European part of Russia, but it is cheaper for them to fly to Europe.

According to the chairman of the public tourism council under the governor of Primorsky Krai, Olga Gurevich, a common problem for all Far Eastern subjects is a poorly developed tourist infrastructure.

"The quality of the tourist product is heavily influenced by such factors as bad roads, insufficient number of information signs and scoreboards, low level of service," says Gurevich. - In addition, there is a big problem with the staff. Unfortunately, we still have not introduced a system of certification guides, and therefore sometimes come across people who conduct tours, absolutely not knowing the subject. Of course, each region has its own specifics, but as the tourism industry develops, each of them will face similar problems. For example, Primorye attracts tourists primarily by the sea coast. Most popular beaches and recreational areas are located in small settlements, the infrastructure of which simply is not designed for a large number of people. In the high tourist season in these coastal towns and their environs, tourists are four or even five times more than the local residents. Naturally, the medical services and the police of these settlements simply can not cope with such a flow. It goes so far that there are not enough elementary products in the neighborhood stores, - says Olga Gurevich.

In her opinion, the problem is also that in high seasons prices in the Far East do not match the quality. The cost of services is too high.

- Few people think about the extension of the tourist season. Most players in the industry are eager to get more money here and now, "Gurevich said.

Another serious issue that affects not only the tourism industry, but also other areas of the Far East, is the low population of the territories.

"No development without people is possible," says sociologist Maxim Namdakov, "and the tourist sphere is directly tied to the indigenous population." It is these people who supply the personnel of the industry that provide tourism. Unfortunately, the Far East, Transbaikalia, Siberia продолжаютto lose the population. Of course, in each subject this process goes differently, but the general trend is exactly this. Moreover, internal migration can also affect tourism. People from small settlements move to larger ones, which, in turn, "bared" tourist attractions in the outback. Infrastructure suffers from this. A modern mass tourist loves not only beauty but also comfort. Therefore, it is unlikely that he will go to admire the waterfalls and lakes, unable to rest after a walk with all amenities. And to provide it to them can only the population permanently residing near to sights, - the sociologist marks.

The Far East has enormous resources for the development of both domestic and inbound tourism, and government support measures that are presented under the federal law "On the Free Port of Vladivostok" provide ample opportunities for the development of tourism in the DFO, says Associate Professor of Service and Tourism School FEFU Economics and Management Irina Barashok.

- If we take into account the remoteness of the Far Eastern region from the central regions of the country, then the first thing I would like to note is the lack of information about the Far East. Recently, the Pacific Breeze Tour Operators Forum was held in the Primorsky Territory, and its participants just noted that information on the Far East is extremely small or it is “on duty”. Therefore, it is necessary as often as possible to organize family tours for Russian and foreign tour operators, so that they learn more about the DFO, can independently assess the tourist resources of the region. To raise awareness of the region, the tourist industry, if possible - participate in the workshop “Tourist industry”, write more about the region to journalists, posting articles in such electronic publications, for example, RATA-news, - the expert says.

To enhance tourist flows, it is important to develop transportation, increase the number of regular flights in Russia and international traffic, to solve the problem of quality service in the tourist market - to pay attention to the training of personnel for the tourism industry, namely the mastering of practical professional skills. One of the ways to solve this problem is the introduction of WorldSkills standards in the educational process.

“It is possible to increase the average length of stay in the region and motivate tourists to repeat trips by diversifying tourist routes and expanding the network of interregional routes within the Eastern Ring project of Russia. To develop a new tourist route, you need to know the consumer of tourist services and understand what he wants to see. Therefore, the use of a marketing approach in the activities of travel agencies should be mandatory, "- said the expert. According to Irina Barashok, it is also necessary to develop unique event activities that could cause interest among tourists. "The development of event tourism requires a new approach to its organization - the coordination of numerous collaborators and co-organizers. In addition, without financial, organizational, informational support for the executive branch of an effective tourist event, it is not possible to create," she sums up.
Tags: tourism infrastructure traffic Cruises Travel Attraction