The release of this premiere 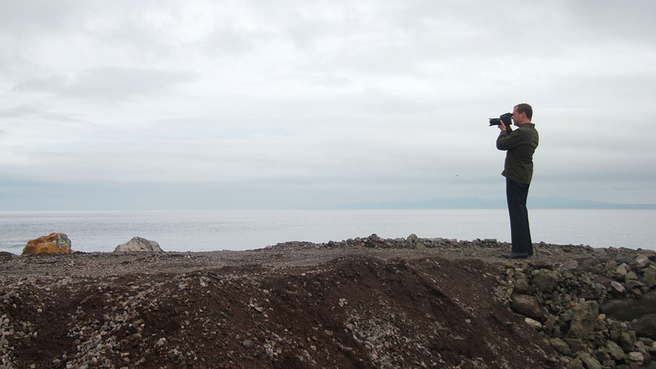 Photo: Dmitry Medvedev on Iturup island. Photo 2015 year, government.ru
Will PM PRIME MINISTER DMITRY MEDVEDEV FOR THE KURILS DURING HOLIDAYS ON SAKHALIN?
As they say, Russian Prime Minister Dmitry Medvedev will visit Sakhalin this week. In the agenda of the prime minister, it seems, as an official part, and unofficial. As part of the first, he will hold a meeting in Yuzhno-Sakhalinsk with regional and federal officials on the development of the fishing industry, which has already been notified in the administrations of the subjects of the Far Eastern Federal District. The event is scheduled for 22 August. Mr. Medvedev was waiting in the region on Friday, but he suddenly changed his plans and flew to Sevastopol. The previous large-scale meeting on the fish industry under the chairmanship of the Prime Minister in the Far East was held in Magadan in 2014, the previous large-scale working trip of Dmitry Medvedev to Sakhalin in 2012.

Dmitry Medvedev's visit to the island may also have a political meaning: 10 September elections for the regional Duma should be held, and party leader support will not be hampered by the party's party members. As they say, the trip of Mr. Medvedev can be accompanied by Secretary of the General Council of United Russia Sergei Neverov and other prominent United Russia. Within the framework of possible meetings with party activists, Dmitry Medvedev can touch on the development of the social sphere and, in particular, public health: in this area, the Sakhalin region has something to boast about.

In addition, according to rumors, the head of the Russian government also intends to rest on Sakhalin and fish. Perhaps he will visit the natural park "Moneron Island". But the main foreign policy signal will be whether Dmitry Medvedev will fly to the Kurile Islands. The trip itself can become another painful signal for the government of Japan, as in the Land of the Rising Sun visits by Russian top officials to the Kurils are perceived as unfriendly signals - the two countries have not yet settled relations around the four islands in the south of the archipelago. On the contrary, if the visit does not take place, it will be perceived as a positive signal on the eve of the Eastern Economic Forum, which will be held in Vladivostok in September. The last time the Kuriles Dmitry Medvedev visited in 2015 in August.


WILL VLADIMIR PUTIN SEND NEW YEAR'S ADDRESS FROM THE DRAMMATER IN KOMSOMOLSK-ON-AMUR?
According to rumors, President Vladimir Putin is also expected to have an interesting visit in the near future: immediately after the Eastern Economic Forum, he should arrive in Komsomolsk-on-Amur. EastRussia already reported, That the head of state, according to rumors, is soon expected in the "city of presidential attention." Khabarovsk Governor Vyacheslav Shport, who visited Komsomolsk-on-Amur late last week, while communicating with the contractor for the reconstruction of the drama theater near the modernized pool with fountains, promised to try to bring Mr. Putin to the premiere in the renovated cultural institution.

The institution can already be proud of the newest rotating stage and the largest screen in the Far East, capable of reproducing 4K format video. In addition, the other day, Prime Minister Dmitry Medvedev signed a resolution on the allocation of additional 172 million rubles. For the reconstruction of the Drama Theater. Due to the lack of these funds, the contractor is said to be behind schedule. However, less than a month to complete the reconstruction of the builders obviously do not have time - according to plans this should happen not earlier than the end of 2017. Thus, the head of state is unlikely to be able to attend the theatrical premiere without visiting Komsomolsk-on-Amur twice, which means that the president has only one chance to synchronize with the builders - to write a New Year's address to the Russians from Komsomolsk-on-Amur. Once he already did it from Khabarovsk.


WHAT SHALL STOP THE CONSTRUCTION OF THE COAL TERMINAL IN THE BOOK SUKHODOL IS BACK: LOCAL AUTHORITY REFUSAL OR PRESIDENT'S STATEMENT?
Meanwhile, the statement by Vladimir Putin last week provoked a new wave of discussion of the draft coal terminal in Suhodol Bay near the Bolshoy Kamen. The terminal for two phases of 6 million tons of transshipment per year began to design in Primorye in 2012, the Siberian Business Union (VTS). Vladimir Putin, mentioning a complaint about the coal dust of a boy from Nakhodka, voiced during the June “straight line”, said that “it’s impossible to completely abandon coal transshipment”, but made it clear that for all projects “when choosing sites for creating new port facilities should be given priority attention to environmental issues, should be attentive to these issues, taking into account the interests of residents of nearby areas. ”

VTS in 2016 announces the freeze of the terminal project due to lack of funding, but in July 2017 for approval to the administration of the Big Stone from the Primorsky Territory Administration came a draft amendment to the general layout of the settlement, providing for the possibility of locating a coal terminal in Sukhodol Bay. And about. Head of the administration of the urban district of the Big Stone Vyacheslav Moskaev decided to refuse to agree on the project because of the negative attitude of the population. According to rumors, residents of the nearby gaming zone "Primorye" are not very satisfied with the project.


WHY RESUME THE CRIMINAL CASE IN RESPECT OF THE SON OF YAKUTSKY SPEAKER ALEKSANDR ZHIRKOV?
Meanwhile, in Yakutia, the incident with the son of the speaker of the republican parliament, Alexander Zhirkov, is being discussed. Two years ago in Moscow he was detained on suspicion of beating and kidnapping a man, but the case was closed. Now the victim filed an application to re-initiate investigative measures. The noise that has risen in the press has a negative effect on the father of the young entrepreneur: his son's behavior beats the reputation of Alexander Zhirkov, the elder. Note that the story is said to have started because of the conflict between Alexander Zhirkov, the youngest and Akhiyad Tarchokov. At first the version appeared that Zhirkov stood up for his bride, who allegedly insulted Tarchokov. Then there was information that Tarchokov owed the suspect money, which he decided to dislodge by threats and violence. The official outcome of the investigation, however, is not yet available.
Tags: Dmitry Medvedev Vladimir Vladimirovich Putin Sakhalin Komsomolsk Yakutia