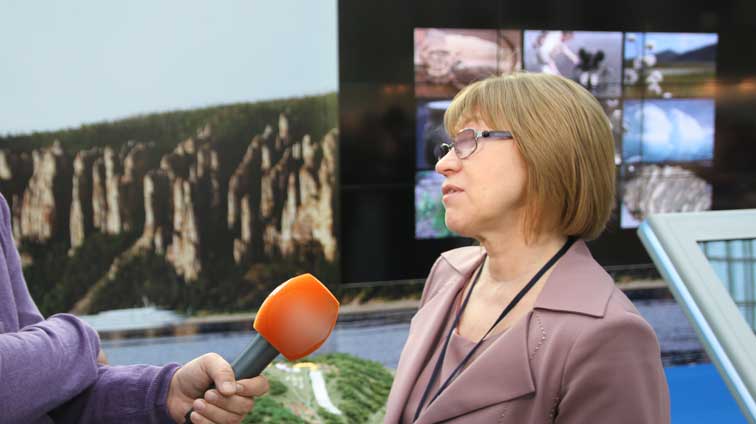 About the Yakut brands and what prevents to reveal the tourist potential of the largest and, perhaps, unusual Russian region, Ekaterina Kormilitsyna, the Minister for Business and Tourism Development of the Republic of Sakha (Yakutia), told EastRussia.Ru.

- Ekaterina Ivanovna, what is your opinion, for what is it worth to go on a trip to Yakutia?

"It's worth visiting Yakutia, at least for the sake of seeing how special it is." Here, the lowest, extreme temperatures (in winter to -70), which you need to feel yourself, the cleanest ecology, ethnotourism. This is the Pole of Cold, and the national nature park Lena Pillars, and the epic Olonkho, and crystal clear rivers and lakes.

- Probably, the tourist season in Yakutia is rather limited and tourists mainly come in the summer ...

- To make our tourism year-round, we create events ourselves. Now there are four of them - one is required per season. In summer, the national summer holiday Ysyakh is held on the day of the summer solstice. In the fall, Diamond Week is a completely new brand that we have been selling for two years now.

In March, a trip to the Pole of Cold takes place. Thanks to the fact that the infrastructure is being created - a year-round road has been built, we were able to make this Mezhulun (oolong - Prim.red.) A tour that passes through Oymyakonye - the birthplace of the spirit of winter. Participants attend a reindeer herders' feast, get acquainted with life in the uluses - Yakutsk - Churapchinsky ulus - Tattinsky ulus - Tomponsky district, taste national dishes. This year, several tourists from Europe came to the event on bicycles, which, you must agree, is very extreme.

And the fifth event - once in four years - international games "Children of Asia." This year the games will be held for the sixth time. By the way, they are popular not only among Russians and residents of the Asia-Pacific region, they are also involved in European countries, almost all 40 countries. Of course, all events are in different degrees of promotion. We are working on this today.

- “The Diamond Week” is somewhat out of the general range of social and cultural events. Is this a completely commercial project?

- This year at the exhibition "Intourmarket 2014" a presentation of the interregional project "The Eastern Ring of Russia" was held. The project, planned for late summer, will cover four Far Eastern subjects of the Russian Federation - Buryatia, the Khabarovsk Territory, Kamchatka and Yakutia. The ring in Yakutsk and Mirny "Diamond Week" will close in the beginning of September. The participants of this tour will be able to trace the entire path of the diamond - from mining to cutting and turning a stone into an exquisite piece of jewelry, and to visit the Diamond Ball. We expect that this project will also increase interest in tourism in Yakutia.

Last week we sent the entire 146 thousand rubles for a certain advertisement from the budget of the republic to the Diamond Week. And the whole project is completely commercial. It is profitable for business, because during this “Diamond Week”, ALROSA holds an international auction for the sale of large rough diamonds and, accordingly, gathers its audience. Our jewelers and cutters who prepare their products sell it well. They sell it so well, but in this case receive exclusive, special offers.

- To what extent do such large-scale projects contribute to the increase of the tourist flow to Yakutia?

- Of course, Yakutia has a lot to gain, and tourism is far from in the first place. Nevertheless, according to statistics, in the last three years the flow of tourists to the region is increasing by the tourist arrival at 6-7% annually. In this case, we mean the information of collective means of accommodation - hotels. It turns out 158 thousand tourists over the past year.

Basically, Russian citizens come to Yakutia. Speaking of foreigners, this is China, Asia-Pacific, North Korea, Europeans are Germans, French. Mostly, these are people who go to special tours - for example, cruises along the Lena River, or participants in research trips, or businessmen.

As for the Russian regions, Yakutia is mostly visited by residents of St. Petersburg, the capital region, and there are tourists from Novosibirsk, Tomsk and Irkutsk. I emphasized that business tourism is very widely represented in the republic - people come to various international congresses. If we are talking about tourism as such - recreation, fishing, hunting, then this, of course, is Moscow, because, alas, it is quite expensive to rest in Yakutia.

- It seems, the brands have developed. But for them to work, we must not only warm up the interest, but also solve the problems ...

- Are not you afraid that the rapid development of infrastructure will destroy the uniqueness of Yakutia?

- The territory of our republic 3 million 100 square kilometers - it's five France. But still the question is reasonable. When developing natural resources - oil, gas, coal, gold, diamonds - there is always environmental control and respect for the interests of residents, their traditional way of life. The same is true in tourism. In the region there are huge areas that are closed to tourists, precisely because they make up our ecological reservoir.