From "Barn" to a hectare

Yesterday, the Council for Entrepreneurship and Improving the Investment Climate under the Khabarovsk Governor Vyacheslav Shport held a personnel rotation. The post of the deputy chairman representing business was vacated by Sergei Stepanov. He was replaced by Andrey Veretennikov, the chairman of the Association of Restaurateurs of the Khabarovsk Territory. But I'm not talking about that (it was all expected). 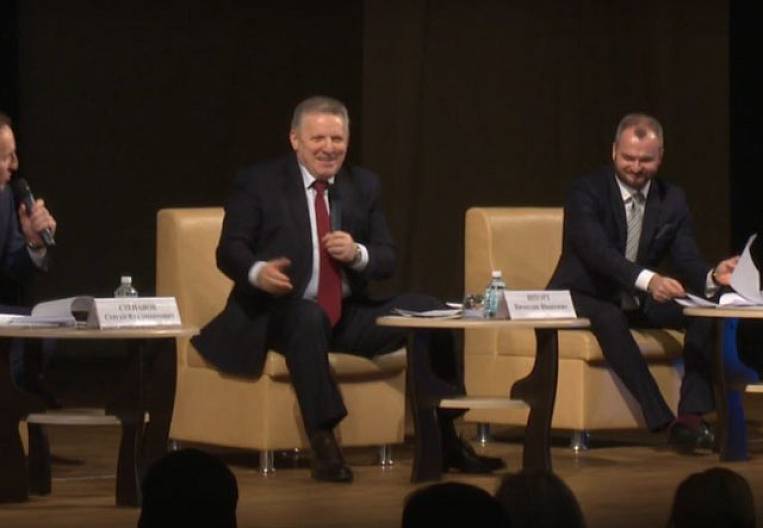 
You know, I love the speeches of our governor without paper.

An entrepreneur from Bikin gets up. And he says: “We have a population of 16 thousands of cities. We are now in December, came a large trading network "Ambar", plans to go "Traffic Light". Already 13 outlets closed, because we can not compete with them. Suppliers, manufacturers give them prices that do not even give us as wholesale. In general, this situation. I would like to clarify somehow: can such retail networks enter such small cities so that we can close everyone down there! ”

About the stores, discounters, I once wrote (On the example of "Traffic light"). It is clear that it is difficult to compete with these guys. But the entrepreneur did not stop there.

She continued: “And about the CCP [introduction of mandatory online cash desks] the law is passed. For those who stay and are going to work. We had a meeting that we have to install them from July. In small regions, good, sustainable Internet coverage does not go everywhere. This time. It is proposed to run on a slide and dump the data. Then they even told us that even if the plants work around the clock, two or three of them, they will not be able to provide us with the amount of equipment. And they still have to go, we install them. And fines will start right away. Maybe somehow get together, offer to move this thing? ".

And added: cities with a population less than 10 thousand people were allowed not to put on-line cash-desks, maybe 20-30-thousands of such benefits can be provided?

It would be all nothing. But one more thing could not fail to mention the entrepreneur. On TV, they say, recently this story was shown. “And the third. On the "Far Eastern hectare." We passed the transfer in February, as in our city, this law takes on ugly forms. Entrepreneur worked for 20 for years. He built a shop, he has a cafe there. Well, it works well. A store stood along the Ussuri highway. Road moved [now the city on the federal highway circle]. Previously, he tried this land along, well, in short, the land was not given. Now another 15 plot on it, on 17, before entering, took the land and said, I will plant a garden there. I put the fence. He gave the land to the city, said that everything is according to the law. Could at least say that the request for this territory is near full of land. Now we are told, now even Muscovites can pick them up, and you will buy them back. ”

Governor Vyacheslav Shport agreed to answer the third question, leaving the first two to Ivan Zagorsky. "One businessman turned out to be more entrepreneurial than another entrepreneur," the governor said with a smile. "This is the competition. But that businessman 20 years who works there, I do not know him, of course, I know the question, I was shown him there yesterday, the day before yesterday. And the other is just not an entrepreneur, just a normal person, took a computer, drew a free hectare point for free and took it. This area, there is not written that there is a shop. Nobody can be blamed, everything is legal. I myself once said 20 on television: dear residents of the Khabarovsk Territory. Disassemble the hectares more! Otherwise it can happen, then what you say, yes. In a computer in Moscow, press the dots, take a hectare in front of your house, if it is free. And the businessman would take this hectare in front of the store and plant the trees there! And I made parking for cars, for example. Cho did not take it? Is free!".

An entrepreneur from the audience tried to say that "this is wrong."

But can you argue with Vyacheslav Ivanovich?

"I once again to you ... Today we can not, rightly or wrongly. We have done so that the participation of officials in the selection of a hectare was not! He's not here today! You draw a point home! And you get permission and take the ground. "

“But maybe the official could at least warn this ...” - the businessman in the hall did not give up.

"Where is he from?" Well, probably, humanly, he could and could, if he knew. And suppose that he did not know? Everyone sits at home and chooses a hectare now. Moscow will now wake up - hectares. Peter wakes up - hectares. Let our two citizens of the Khabarovsk Territory jointly agree. Che will do something good there. I gave instructions to deal with this issue. I got it on Saturday. But I'm telling you that this can happen to anyone. And the one who works there 20 years, he like no one should know that she is there free, because she is in the computer. And take it and stake it, in an amicable way. You can not blame anyone. We must do lessons in this situation, and we, and you. Access is not regulated by anyone except two concepts: "impossible" or "impossible", "the governor retorted.
"So this computer gives out the ground ?!" - asked the entrepreneur.

"Yes. Of course. You have a bad time there, somehow in Bikin, we have a planned trip there, which is not very intelligibly explained by the local authorities. The computer gives out! ”, - the governor opened his eyes to the local business.

Well and further in the text: we have 10 thousands of applications, 530 from non-resident, and so on. And you need to negotiate. And Yuri Chaika is responsible for the question. And to the governor, they say, I wonder how they will agree in the end.

"The arrival of large companies. This question is not regulated in any way. I suggest that you make an offer, we'll see. We, perhaps, look, what kind of regional law to take ... "

And then Ivan Zagorsky joined in, who all this time patiently stood behind the podium after his report (and the question was to him). “We are already addressing this issue. DVART turned with it to us, and we are working. The problem all over the world is like that, and we are working on approaches. ”

"Well, here you go. Maybe we will be the first in the world to come up with the right solution. The question is, we should not leave him, "the governor said cheerfully.

The question on the CCP was assumed solely by Ivan Zagorsky. But there is no answer yet. "We will discuss this issue in the near future, we will definitely take some of the decisions," he promised.

After the “hectare” discussion, of course, it was pale.