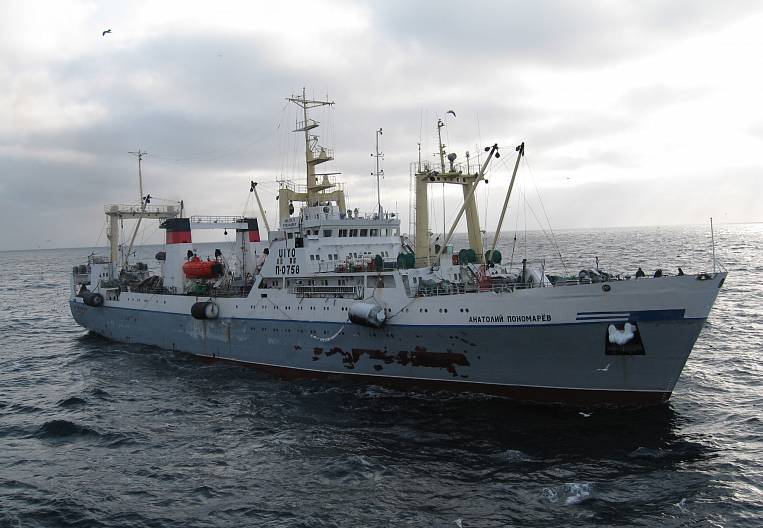 Kamchatka fishermen are waiting for the adoption of a law that will allow their vessels to cross the Russian border unhindered. Due to collisions in the Russian legislation, the losses of the largest enterprises of the region, which extract the white fish, last year reached hundreds of millions of rubles.

December 23 The State Duma of the country will begin consideration of a bill that will allow fishing vessels to cross the Russian border in a notification procedure. The document was submitted to the deputies at the end of September by the chairman of the Duma committee on security and anti-corruption Irina Yarovaya.

“Russian fishing vessels are the only category of merchant shipping vessels that cross the state border not in a notification procedure, but on the basis of a permit issued by border authorities. At the same time, the Code of merchant shipping of the Russian Federation, vessels used for fishing, along with others, are referred to merchant shipping vessels and are not allocated to a special category. Thus, the envisaged special procedure for crossing the state border in relation to exclusively Russian fishing vessels not only unjustifiably infringes the rights of fishermen, but ultimately leads to significant economic losses and reduces the indicators of national economic and food security, ”the explanatory note to the initiative says. .

This document is one of the most anticipated in the industry. “Russian vessels need to allow border crossing as soon as possible in the notification procedure,” says Alexander Litvinenko, general director of Tylamat Fish Factory. According to him, this year one of the “daughters” of the fish factory has already been deprived of the right to cross the state border for a period of one year for petty violation.

"The radist mistakenly swapped the letters in the reporting documentation about the crossing of the border. Because of this, the whole company was generally deprived of the right to cross the border within a year within the framework of the 560 government resolution. 8-10 ships lost the opportunity to work, - says the representative of the fish processing plant. "Now we are mining a scallop near the island of Onekotan with permission to cross the border of another company." Otherwise, we will simply lose our quota. But it turns out that when we leave North-Kurilsk, we can not even reach the fishing area. The distance between the islands is more than 25 miles, and we are compelled in any case to cross the border. For the last two months, we have already received 68 protocols on violation of the order of crossing. Penalty for one crossing - from 300 to 800 thousand rubles. It turns out that we will pay more than 40 million. "

Kamchatka fishermen have repeatedly appealed to various authorities in order to impose a moratorium on the use of draconian measures by border guards before the adoption of the new law, at least to allow, as before, work under the authority of other organizations.

Now the bill is being discussed publicly. Their proposals to the document, public organizations and authorities can send to the Duma until December 15. Kamchatka fishermen are also preparing.

“We will hold a presidium meeting on December 11, at which we will formulate our proposals,” said Sergey Timoshenko, chairman of the Kamchatka Fishery Union - If we accept it in this edition, the interests of those engaged in industrial fishing and who, for example, serve the fleet in the economic zone, will not be taken into account. The concept of the law is clear, it implies a notification procedure for crossing the border for fishing vessels. But we need to clarify some details. ” According to Sergei Tymoshenko, one of the main proposals from Kamchatka will be the inclusion in the initiative of regulations allowing fishing vessels to transit through the First Kuril Strait.

Recall that the passage through this strait (between Cape Lopatka and Paramushir Island) was closed to fishing fleet vessels with a closed state border in January of this year. Now, to move from the east to the west coast of Kamchatka and back, the fleet is forced to go by the Fourth Kuril Strait. Additional 200 miles is the day of the transition and 3 million rubles of costs for one large-tonnage vessel.

"We will insist that the issue with the opening of the First Kurile Strait for our fishing fleet is also provided for in the law so that we do not have to issue an additional government resolution on this matter," Tymoshenko explained.

The problem of opening the First Kuril Strait is no less acute than excessive control and a peculiar interpretation of the laws by the border authorities. On January 1, Kamchatka fishing fleet will go to the main Okhotsk sea pollock expedition, fines to company executives will again go to millions. According to the Union of Fishermen of Kamchatka, one of the largest enterprises of the region, Okeanrybflot, this year has already lost 240 million rubles in the Fourth Kuril.

The proposals to the State Duma are now being prepared in the Ministry of Fisheries of the Krai. With the administrative barriers in the industry in the ministry of minrybhoz have been struggling for more than a year. "We hope for the speedy adoption of the law. This is an emergency measure for Kamchatka fishermen, - says the head of the fishery department Vladimir Davydov. - Currently, active fishing is taking place off the coast of Western Kamchatka. In the first four months of next year our enterprises will have to master the main volumes of quotas for pollock in the Sea of ​​Okhotsk. The price of fish, the economic stability of companies, tax deductions and, in general, the situation in the fishery industry will depend on whether it will be possible to remove excessive administrative pressure on fishermen by controlling bodies, to resolve legislative problems. "

Now the main question for industrialists is how long will the adoption of the bill take. Experts note that, most likely, its consideration will be prolonged, since the notification procedure will cause a lot of questions from the control bodies. On whether the initiative will be adopted in the first reading, it will be known after the State Duma meeting 23 December.