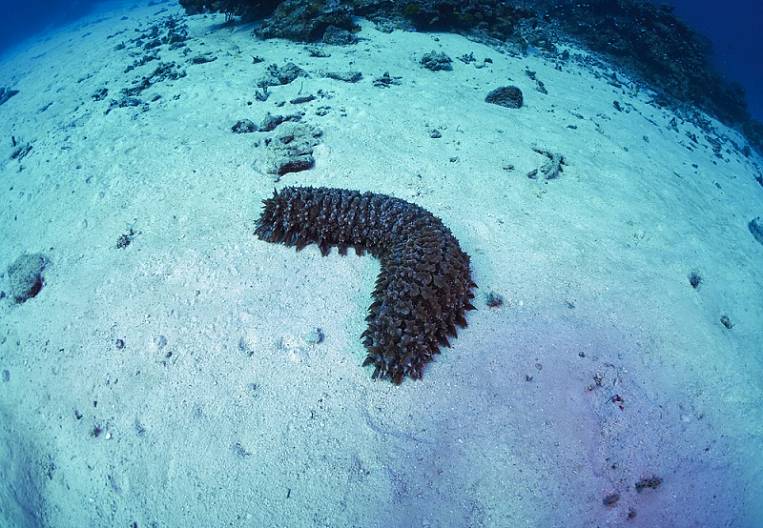 Reports of detentions of Chinese returning to their homeland with cargo, most often dried trepanga, regularly come from the East of Russia. In the West, these news are read with some perplexity. Impressive is not so much the volume of exported trepaga, as the cost of illegal cargo: two million rubles, four, sixteen ... For what, in fact? For this Skliz sea cucumber?

The Chinese think differently. They are ready to pay 20 thousand per kilogram of a unique blue trepang, whose name is still called the Golden Horn Bay. This is a legendary delicacy of not only Chinese, but also Korean and Japanese cuisine with a pleasant but specific taste. This is a storehouse of vitamins and minerals. This is a rejuvenating elixir, a powerful immune stimulant. This is a truly phenomenal seafood.

We have just rasprobovali sea delicacies, which even our grandparents called sea bastards. I remember, the child was collecting shells in the Moscow region river. But it never entered my head that they can be eaten. However, twenty years have not passed, as I gladly mussed and added them to the salad.

But in Primorye the scab from Kukumaria has long been known. Agree, very tasty name. And how useful is this soup! By the way, also from holothurians, relatives of trepanga. In our seas this delights with extraordinary taste, attention, 50 species!

In general, in the East of Russia this kind of good ... Octopus, squid, shrimp, crab ... And mussels, spizuli, oysters, sea urchins, scallops ... And laminaria - sea kale. 30-40 gram per day - and your daily dose of iodine is OK!

This wealth is so much that we do not eat whatever we catch. Pollock is one of the one and a half million tons of strength of four hundred thousand reinforcements. All the rest is for export. Until they themselves tried, we could feed not only China and Japan, but all of South-East Asia. Well, if you do not want to correct your health, then at least you have to earn it.

In the world, an entire industry is working on the production of food, medicine, cosmetics from sea reptiles. The catch of only cephalopods, of which there are 75 species, is approaching 4 million tonnes - mainly in Japan and in the countries of Southeast Asia. In Busan, my acquaintance, a Korean businessman, talked about dozens of Russian ships that daily call at the port with hundreds of tons of our crab. "This is all - he looked around the port facilities, hotels, surrounding buildings - built at the expense of your crab."

Five years ago, scientists Rosrybolovstva prepared a program for the development of mariculture in the Far East. So, the potential of only mariculture, that is, the industrial breeding of marine fish, aquatic plants and aquatic plants, is about 3,5 million tons. The implementation of this project will create more than 1 million new jobs.

The program remains a program for the time being. And even the law on aquaculture, signed by the president of Russia in the summer of 2013, did not work.

Meanwhile, the global aquaculture market grows annually at an average of 10%. And our market is actively mastered by importers. In Moscow, one must understand, quite legally, full of proposals ... Chinese trepanga. Squeezes, dietary supplements, trepang on honey.

This is not the same trepang, which under threat of criminal prosecution at exorbitant prices is melted from Primorye to China. We are going to another trepang, which the Chinese have learned to grow in mariculture. Its quality, of course, is lower. But the price is not, not lower.