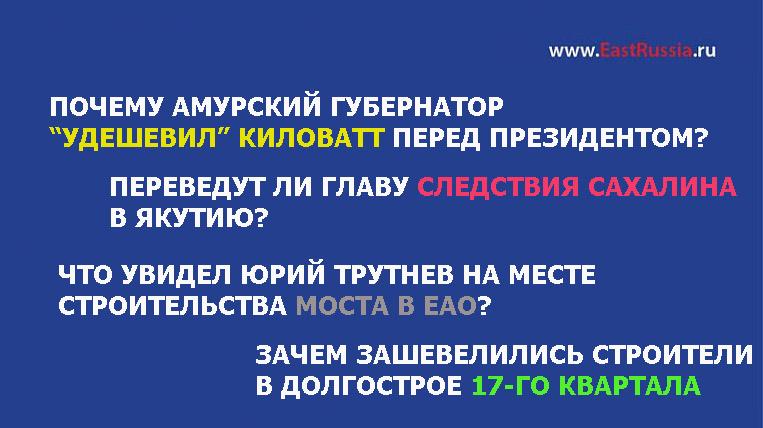 
BEGINNING OF THE QUARTER ADDICTION OR POLITICAL ACTION?
Another news was actively discussed last week in Yakutia. Unusual gestures at the construction site of the new microdistrict caused a lot of gossip from residents of the republic. Note that for more than two years, the Chinese company Chzhoda still can’t start building the 17 quarter of Yakutsk - in the year 2016 the piles of the first house were driven, and then the construction was frozen indefinitely.

On Monday, construction workers appeared on the construction site, which began to cement the piles with cement. The Yakut mass media began to wonder whose representatives they are-journalists do not answer the journalists' questions. Townspeople are speculating that the Yakutsk mayor's office before the September elections went to an agreement with one of the local construction companies: the image of the stormy activity on the construction site will be able to protect the head of the city Aisen Nikolayev from uncomfortable questions about the problematic "construction of the century".

Initially, it was planned that the Chinese will build new homes in the territory of the three most problematic quarters in Yakutsk. It was about three hundred buildings with a total square in 800 thousand square meters. However, further preparations for the construction of the case did not go.


HOW THE AMUR GOVERNOR TALKED
The Amur governor Alexander Kozlov has already happened to act as a "starter" for heated discussions. Last week, in the region, the head of the subject was not able to correctly answer the president's question about energy tariffs. During a working meeting with the governor, which was held on 3 August during a visit to the Vladimir Putin area, the latter touched on the question that has been widely discussed for several years: why do power producers sell electricity to China cheaper than to their consumers.

"We sell 50 kW to China for 1 kopecks. Ours is more expensive," Vladimir Putin quoted an appeal from one of the residents. According to the data available to the President, this is not true - the wholesale selling price in the PRC is allegedly 3,5 rubles, while in the Amur Region the average retail price for business is 3,8 rubles, and for the population - 2,1 rubles. "With electric stoves - 2,40, and with gas stoves - 20 kopecks more," corrected the head of state Alexander Kozlov, adding that the Amur tariffs are lower than the average Russian ones.

The quote immediately spread through the media, causing a wave of indignation: "You told Putin that the electricity tariff for the population is 2 rubles 60 kopecks. On what basis does PJSC DEK bills me at the rate of 3,52 per kWh?", "I pay 3,52 , 1 rubles per kilowatt. Tell me how to get the recalculation? "," You, apparently, do not pay for electricity yourself if you do not know the tariffs? Or is there a benefit for the governor? " A little later, a message from the user pressgubernatorlive appeared in the same place: “Alexander Alexandrovich made a reservation. The tariff in the region with gas stoves is 6 ruble XNUMX kopecks more expensive. Apologize".

According to PJSC "DEK", since July this year, the cost of kWh in the Amur region is 2,46 rubles. For subscribers with electric stoves and 3,52 rub. For owners of gas stoves. Representatives of small and medium-sized businesses argue that they pay at the rate of 6-8 rubles. For kWh, which is also much higher than the data presented to Vladimir Putin.


Did the bridge have a new problem?
Another rumor came last week from the Jewish Autonomy, where immediately After Vladimir Putin's visit to the Amur Region the plenipotentiary looked in - Vice-Premier Yury Trutnev. Mr. Trutnev, by tradition, was taken to the "construction site of the century" - the Nizhneleninskoe – Tongjiang bridge crossing. After that, the authorities of the JAR In an even tone, reported that the project is quite a bit behind schedule, And Yuri Trutnev promised to gather in Moscow meeting, which must agree on the acceleration of the construction of a corresponding railway border crossing: without it, the bridge will remain a heap of concrete and metal.

But the operator of the Rubicon project, now jointly owned by Russian and Chinese funds, as they say, has already told shareholders that the bridge will pay off only for 30 years, which is unacceptable for funds. In addition, co-owners still can not decide who exactly will own the infrastructure after it is handed over. The project of the Nizhneleninskoe-Tongjiang bridge, we recall, moved from the dead center in 2016: the Russian part of the object determined the financing scheme, an estimate of 9 billion rubles, including 4 billion rubles. on the bridge itself, and found a contractor, USK "Bridge". Work on the Russian part of the bridge, a little more than 300 m with four pillars, should be completed by June 2 2018, Chinese 1,7 km have already been built.
Tags: Amur Region Vladimir Vladimirovich Putin Alexander Kozlov EVO Alexander Levintal Yakutia Sakhalin