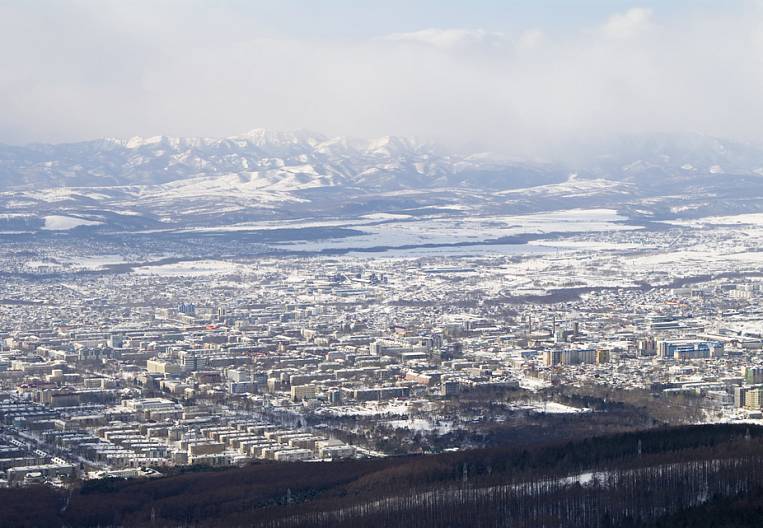 Deputy Prime Minister of the Sakhalin Region - Minister of Finance of the Region Tatyana Karpova told the EastRussia.ru correspondent about how the budget of the region was made up, how strong the social component is in it, and how Sakhalin took up the development of the independence of local budgets at an accelerated pace.

- The Sakhalin region is a region that has taken on great social obligations and launched large-scale development projects. There are opportunities for this. The extraction of oil and gas, the production of liquefied natural gas - all this brings to the regional treasury about 70 percent of revenues. At the time of high energy prices, its size exceeded 130 billion rubles a year. But now oil prices have gone down. Is an island region ready for such a turn of fate?

- The regional budget project for 2015-2017 years, like the federal one, was formed in very difficult conditions, connected with the weakening of the national currency, the fall in oil prices. We worked out several scenarios for the development of events. Depending on the conjuncture in the world oil and gas markets, optimistic, conservative and crisis options for budget formation were assumed. For example, the optimistic assumed the preservation of the price of oil in 2015 at the level of the average annual price of the current year. Crisis, on the contrary, envisaged a drop in prices to 80-90 dollars per barrel. As a result of the consideration in the Government of the Sakhalin Region, a conservative option was selected that corresponds to the indicators of the forecast of Russia's socioeconomic development.

It is assumed that the price of a barrel of oil over the next three years will remain at the level of US $ 100. And the exchange rate, despite temporary fluctuations, will rise from 37,7 rubles to a dollar in 2015 to 39,5 rubles to 2017. Such dynamics with a relatively stable level of oil production will ensure the filling of the treasury. In general, the regional budget revenues in 2015 will be 121 billion rubles, in 2016 year - 120 billion, in 2017 year - 128 billion. Expenditures next year are planned in the amount of 130 billion.

- Meanwhile, within a few weeks, oil prices are showing a tendency to further decline below the mark of 90 dollars per barrel.

- These are, of course, disturbing calls. But I do not think that the situation will worsen. Winter is coming, the time of the traditional increase in energy demand and price rises for them. We tried to take all this into account when we planned income tax revenues from oil companies.

This year in the regional treasury we have formed our own "safety cushion", a reserve fund. Now it contains 4 billion rubles, next year it will be replenished by another 3,7 billion. These funds will be used to implement budget expenditures in the event that the fall in oil prices will be more than predicted. There is also a reserve for municipalities - about 1,5 billion rubles. They will be aimed at providing additional financial assistance to municipalities if, for objective reasons, they do not receive the planned income.

- What is the main goal you set for yourself in the work on the draft regional budget?

- The main task that we set was to balance the main parameters of the budget, while maintaining macroeconomic stability and to fulfill all social obligations. A serious package of social support measures has been taken in the region. We have them over 90. Therefore, it is extremely important to fulfill the obligations assumed on social payments, as well as the wages of state employees, on investments in the development of the infrastructure of the region. In this decision, we were supported by the population of the region during the public discussion of the draft of the main financial law of the region, which was held in municipalities. They were attended by deputies of the Sakhalin Duma, representative bodies of local self-government, mayors, heads of state and municipal institutions, social activists and everyone. The draft budget developed by us provides that all these tasks will be solved in full. It can be called socially oriented. Judge for yourself. If we invest a lot in investment projects, which will be implemented a lot in the region, next year we will allocate about 30 percent of the funds, then in the social sphere - 45,3 percent. In 2014, this indicator was slightly lower - 43 percent.

Priority directions of our expenses are determined in accordance with the so-called May decrees of the President. They concern, in particular, increase of salaries to state employees, liquidation of queues in kindergartens, resettlement of citizens from dilapidated and emergency housing. I must say that the work on their implementation in our region is carried out at a faster pace. For example, the average salary of doctors in 2015 will reach 84,2 thousand rubles, the average medical staff - 46,97 thousand rubles. At school teachers - 59,27 thousand rubles, educators - 51,7 thousand rubles.

By the way, according to the decision of our governor Alexander Horoshavin, the salaries of state employees will be increased already from 1 January, whereas at the federal level such increase will happen only from 1 October 2015.

At the expense of the regional budget will be funded 12 state programs of social orientation. They are united by the common name "New quality of life". The biggest expenses are stipulated in the program "Development of education", in second place - "Development of healthcare", the third - the program to provide the population with high-quality housing and communal services.

For three years, within the framework of all existing state programs, we must build 450 objects. It must be said that the task of providing the population with places in kindergartens, which the President has set, is practically solved in our region. Therefore, we have already begun to build schools. On September 1, a new gymnasium for 800 students was commissioned in Yuzhno-Sakhalinsk. There are no analogues to it in the whole Far East. The object turned out to be super-modern, it became for us, one can say, the standard in the construction of new schools. The three-storey building with a glass atrium in the center houses not only classrooms, but also sleeping rooms for children from elementary grades, a gym and a hall for choreography, a dining room with 250 seats, a library with a book depository on 10 thousands of books and an assembly hall with 348 seats . The reconstruction of the school in Kholmsk has been completed. Among the facilities that we will build, in the first place is a new high school in Dolinsk and several schools in Yuzhno-Sakhalinsk, as well as a regional perinatal center and a psychiatric hospital. Naturally, there are costs for major repairs of schools and kindergartens, cultural institutions, courtyards, utilities, street lighting, facades and roofs of residential buildings, asphalting of roads in areas of the region.

- What is the draft budget differs from the current law?

- Dmitry Medvedev speaking at a meeting of the Government of the Russian Federation in the framework of the consideration of the draft federal budget for 2015-2017 years, drew particular attention to the need to take measures related to strengthening the revenue base and increasing the independence of local budgets. On the basis of this message, in 2014, as part of the implementation of the state program "Public Finance Management of the Sakhalin Oblast", we began serious work to improve intergovernmental fiscal relations in the Sakhalin Oblast.

The program determines that our budget policy will be aimed at increasing the stability and balance of local budgets, maintaining the size of municipal debt at an economically safe level, increasing the financial independence of local governments in addressing issues of local importance.

This year, from the regional to the local level, the transport tax, a part of excises for oil products, as well as the tax levied when applying the simplified taxation system were transferred.

We are also increasing the amount of subsidies to equalize the budgetary security of local budgets. All this will enable municipal authorities to independently develop territories with the help of increased budget opportunities.

In the past year, own roads were formed in the districts. In 2015, they will be fully funded from local budgets at the expense of taxes transferred from the oblast level. At the same time, major investment projects for the construction or reconstruction of regional roads, included in the targeted investment program of the region, will continue to be financed by regional subsidies to local budgets.

At the same time, we are reducing the level of co-financing from local budgets for urban districts and the municipal district to 1 percent, and for settlements - up to 0,5 percent.

Today we are fundamentally changing the approach to the formation of municipal budgets. Just a few years ago, before the start of implementation of projects for the development of hydrocarbon resources on the Sakhalin Island shelf and substantial revenues to the region’s treasury from the oil and gas industry, we could only fully ensure top priority expenses - salaries, medicines, housing and communal services. There were no plans for the future.

Starting with the 2015 year, municipalities will plan local budgets based on municipal programs, which set targets, the time frame for achieving them, and the amount of necessary financial resources.

Today, the municipal authorities have an opportunity to determine the most important ways of spending their own money to accelerate the socio-economic development of the territory.
Tags: Sakhalin budget oil prices May decrees

Analytics Far East: stress test in 2020 and the results of the implementation of the "new economic policy"

The year of the pandemic has become a difficult stress test for the Far East, demonstrating unfavorable results against the background of other regions of Russia.