A traditional August conference of educators is taking place in the Trans-Baikal Territory, in which Tatyana Sinyugina, Deputy Minister of Education of Russia, takes part. Participants discuss school development prospects. 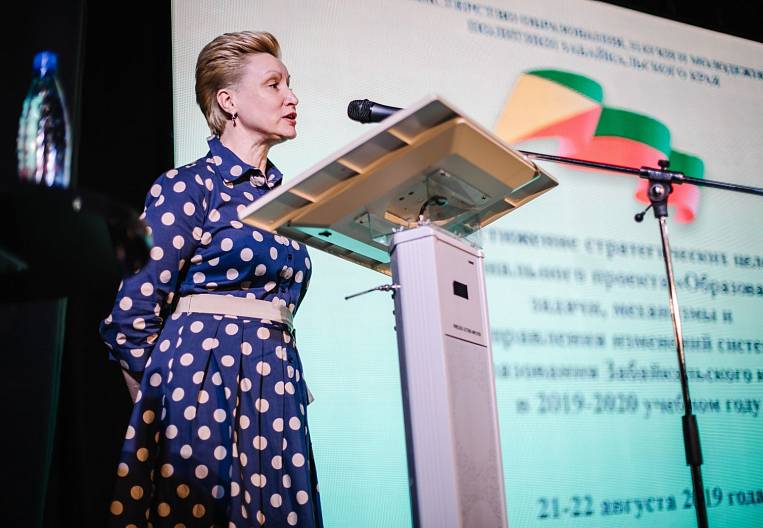 A traditional August conference of educators is taking place in the Trans-Baikal Territory, in which Tatyana Sinyugina, Deputy Minister of Education of Russia, takes part. Participants discuss school development prospects.

The purpose of the August conference is a professional and public discussion of the tasks, mechanisms and main directions of changes in the education system in the 2019-2020 academic year in accordance with the objectives of the national project "Education". On interactive platforms, the current activities of the regional and municipal education systems are discussed in the context of the implementation of the national project "Education" with the wide involvement of representatives of the authorities, the deputy corps, social and professional communities, and the parent community.

More than 400 educational workers from all over the region gathered in Chita to take part in the discussion of the most pressing problems facing teachers on the eve of the start of the new school year.

“On behalf of the government of the region, let me wish you success in implementing everything that was planned this year. I want to emphasize the scale of the work that is being organized as part of the Education national project. We have not yet seen and did not know such a scale. Our common task is to make the education system of Transbaikalia in line with modern social requirements, ”said Ayagma Vanchikova, Deputy Prime Minister of the Transbaikal Territory, at the opening of the conference.

According to her, now 14 schools are undergoing repairs, and 200 are being improved. Next year, the region will receive 600 million rubles from the national project. In addition, the regional education system received 730 million rubles this year under the program for the development of centers of economic growth.

In 2019, about two billion rubles were raised in the framework of the national Education project in Transbaikalia. These funds are used to repair and improve schools.

Deputy Minister of Education of Russia Tatyana Sinyugina noted that education workers and the regional government also need to do a lot: strengthen and modernize the material base, equip schools, institutions of vocational, additional, special education with modern equipment.

“This, of course, enhances the prestige of the teaching profession, it creates the conditions for the continuous improvement of the professional skills of our teachers, regardless of the educational institutions in which they work. But, of course, there are opportunities for our children to reveal in each of them the abilities and talents that exist. To enable them to be realized. And of course, to find that very successful path for each of them in life, ”said Tatyana Sinyugina.

She spoke about the need for preventive classes with children and urged that more attention be paid to the education of students. According to her, this component in the education system has not been regulated for a long time, but 11 educational programs have already been created, which will soon be distributed in schools.

“We need to engage in education. To do this, we need to pay even more attention to teachers and parents on schoolchildren, ”the deputy minister said.

To teach, not to earn extra money

During the conference, Tatyana Yuryevna shared her personal experience, answering the teacher’s question about salaries.

“When I came to work in school in 1993, I had no work experience. She worked at one rate and considered her low salary fair, ”admitted Tatyana Sinyugina.

According to her, they never came to school to earn money, but there shouldn’t be such that teachers have to look for additional income. She also clarified that the issue of changing the system of calculating salaries for teachers is being developed at the Ministry of Education of the Russian Federation - the salaries of teachers should not depend on the number of hours worked. According to her, the result of work should be important here, and her number of hours. Now the average salary of teachers in the region, according to the data of Transbaikalkraistat, in January-June of the 2019 of the year amounted to a little more than 43 thousand rubles.

In 2020, in the Trans-Baikal Territory, as well as throughout Russia, the Zemsky Teacher program will work, which will help to solve the problem of personnel in the villages of the region. In February of this year, speaking with the annual message to the Federal Assembly, President Vladimir Putin initiated the launch of the Zemsky Teacher national program. Olga Vasilyeva, Minister of Education of the Russian Federation, commented on the prospects for implementing such a program on Channel One.

“In the president’s message, those words were heard that we really looked forward to - a proposal for Zemstvo teachers. We know that there was an attempt to introduce such a program. Then the regions dealt with this. Now the president has heard the federal national program. And what’s important: by analogy with the Zemsky doctor, where age barriers were removed, we can now contact teachers and invite them to work in rural schools, ”the minister said.

According to Vasilyeva, in rural schools today there are not enough 12 thousand teachers (teachers and other employees).

“Of the 42 thousand schools in our country, 26 thousand are rural. It is clear that in them teachers today combine various subjects. And now, teachers, having received the very lifting equipment that will be laid down in this program, will begin to equip their lives in the village, ”the head of the Russian Ministry of Education summarized.

Ahead - Day of Knowledge

Earlier at the operational meeting, the head of the Trans-Baikal Territory, Alexander Osipov, noted that it is necessary to carefully prepare everything for the moment when the children go to school. This applies to the organization and content of the educational process, the condition of buildings, equipment of classes.

“The heads of municipalities together with social ministers need to pay attention to the facilities where repairs are currently underway or construction is ongoing. On time, schools, gyms, and warm toilets must be repaired. In addition, prepare estimates for kindergartens and schools where there are still wooden windows. We will replace them with plastic ones that meet modern requirements and sanitary standards, ”said the head of the region.