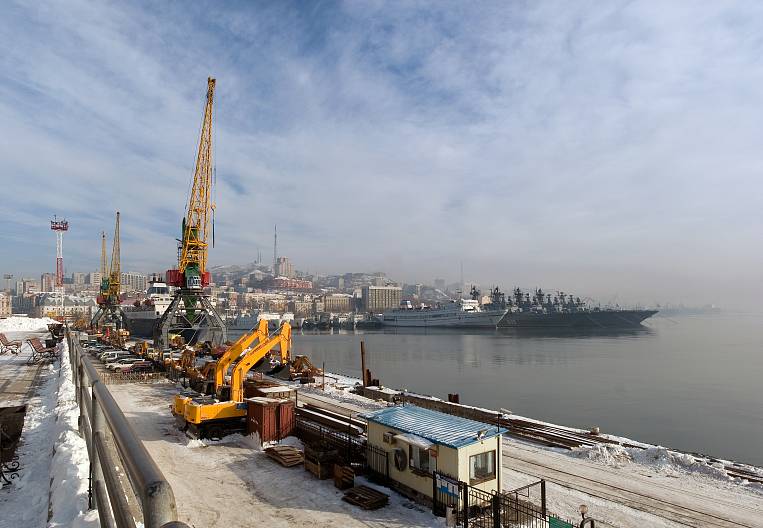 Alexander Galushka: "There has been an official decision of the Government of the Russian Federation to submit a bill on the territories of advanced social and economic development to the State Duma."

At a recent meeting of the Government Commission on the socio-economic development of the Far East, the attention of journalists was focused not only on the liquidation of the consequences of the largest flood, which occurred just over a year ago. This issue seems to be closed. According to Russian Prime Minister Dmitry Medvedev, "more than 40 billion rubles have been transferred to the budgets of the subjects of the federation to restore the Far East from the federal budget."

"On the whole, we can state that this task has been accomplished. The most difficult, of course, was to build and rebuild housing, which was needed by almost 12 thousand people. By 30 September everyone is already living in new or renovated apartments and houses. It was purchased or built 226 thousand square meters of housing, "- summed up the Prime Minister.

In the focus of attention was the regular discussion of the long-suffering draft law on TORs.

“For the development of the Far East, not consolidation for a time is necessary, but systematic attention, that is, not emergency work, but systematic work,” D. Medvedev said. He shared that an important mechanism was approved at the meeting of the Government: "in some ways it is revolutionary, why the disputes continue - this is a package of bills that enshrine the mechanism for creating territories of advanced development."

“I hope that by joint efforts we will be able to advance this bill to the State Duma and adopt such a reasonable, coordinated version of this law,” said the prime minister.

D. Medvedev shared that “the draft law has two main ideas. First, the system of deregulation in these territories. And the second or second idea is tax incentives, in other words economic freedoms and low taxes. Let's see what happens. In any case, the decision is important. ”

At a briefing, the Minister for the Development of the Far East, Alexander Galushka, summed up: "An official decision of the Government of the Russian Federation was made to introduce a draft law on the territories of priority social and economic development into the State Duma."

"In the course of discussions, the quality of the draft law was rather improved, and we found more precise and subtle solutions to the problems that colleagues noted," he stressed.

At the meeting A.Galushka made a presentation on the creation of TORs in the Far East. In the presentation, 14 TORs were selected, ready for implementation until 2020 (Fig. 1). Among them there are TOP Russian Island (Primorsky Territory), TOP Nadezhdinskaya (Primorsky Territory), TOP Basalt-New Technologies (Yakutia), TOR Rakitnaya (Khabarovsk Territory), Kamchatka Territory ). Creation of these territories of advanced development will create 36900 jobs. 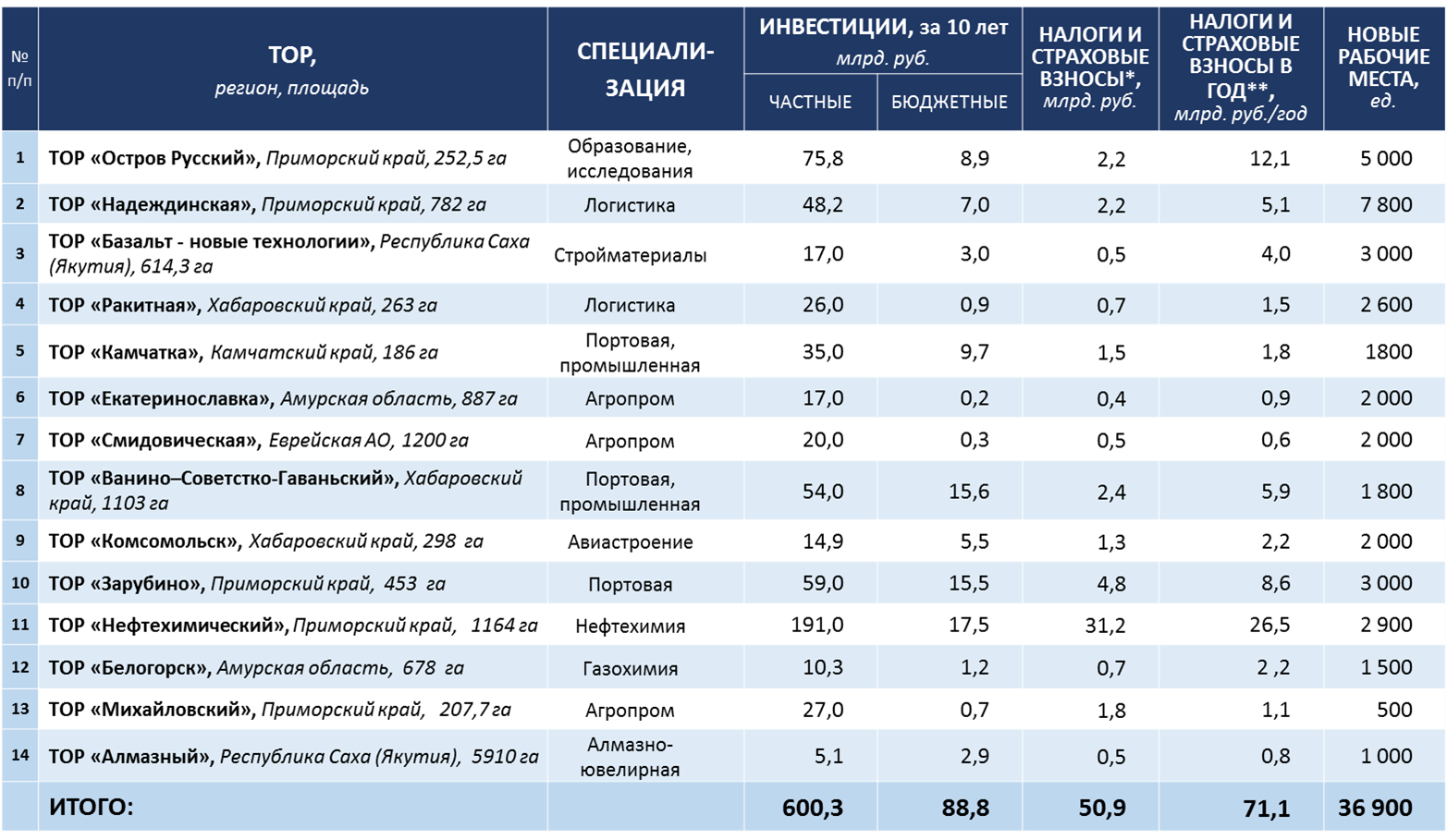 A. Galushka outlined the key provisions of the upcoming law enforcement. For example, if under the general legal regime the period for scheduled and unscheduled inspections is 20 days, then according to the legal regime in TOR, the period for inspections: scheduled is reduced to 15 days, unscheduled to 5 days; if the duration of the state environmental review of project documentation of capital construction projects is up to 3 months (for particularly complex objects - 6 months), then according to the TOR mode - up to 45 days. For residents of TOR, preferential rental rates for real estate objects, preferential connection to utility networks, tax benefits (corporate income tax — 20%, and TOR up to 5% in the first 5 years).

The Minister also talked about the preparation and implementation of investment projects (Figure 2). In this direction, 18 sites are already ready, assuming 2508,9 billion investment for 10 years, they will create 39988 new jobs. 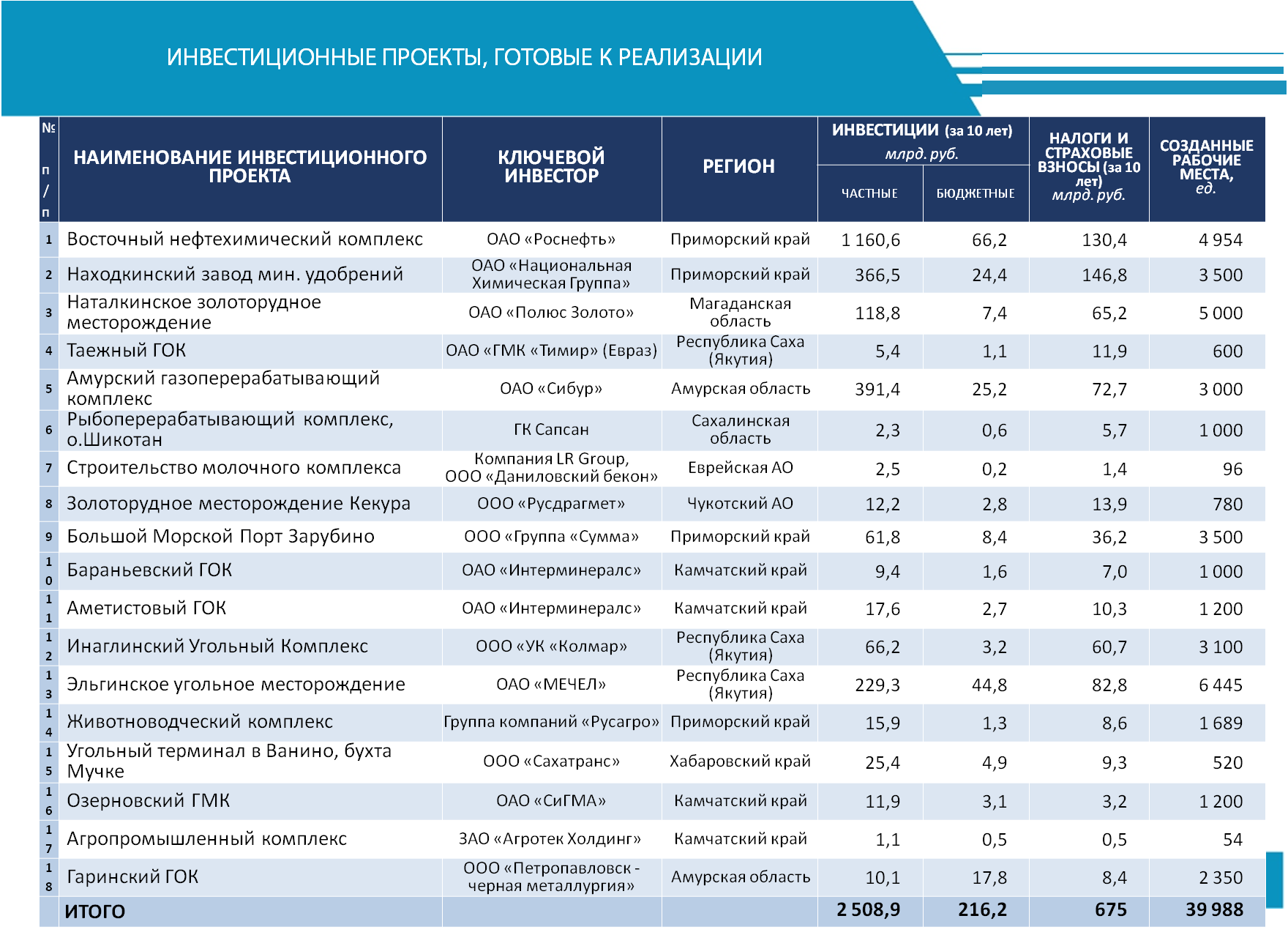 After the meeting, the deputy prime minister, presidential envoy to the Far Eastern Federal District Yuri Trutnev explained to journalists that there are still some disagreements in the issue of creating TOPs, despite the fact that almost everything is close to entering the State Duma, because "this is a completely new law, This is a completely new shell. "

“Let's call things by their names: in the shell of the legislation that exists today, the Far East is not developing rapidly. We have problems in general with the growth rate of the economy, and if we talk about the Far East, then it is impossible to ensure its accelerated development in the framework of today's legislation, ”Y. Trutnev said. “Therefore, the law on the territories of advanced development really comes into conflict with a number of provisions existing in the legislation today.”

According to him, if "we want to be competitive, we need to create a new shell." This new law, the new shell is built on the principles of competition with the strongest players - with the countries of the Asia-Pacific region surrounding us in the Far East. "

"As for disputes and different views, whenever new law is born, something new is being created in legislation, new in proposals, - disputes exist, it's normal," Yuri Trutnev said.