As EastRussia has learned, the construction of the first five-star hotel in Kamchatka, which is run by the resident of the Free Port of Vladivostok "New House", has encountered difficulties. It will be necessary to bring more than what was supposed to the already almost erected buildings, the power of electricity and water, which is why the coordination with the network holders is delayed, and the timing of commissioning the facility is shifted. Connect the object to the heating network and will succeed no earlier than the end of next year. EastRussia recalled that the projects of premium hotels in the Far East all the time were faced with difficulties, and tried to figure out what the problem was with an investor in Kamchatka. 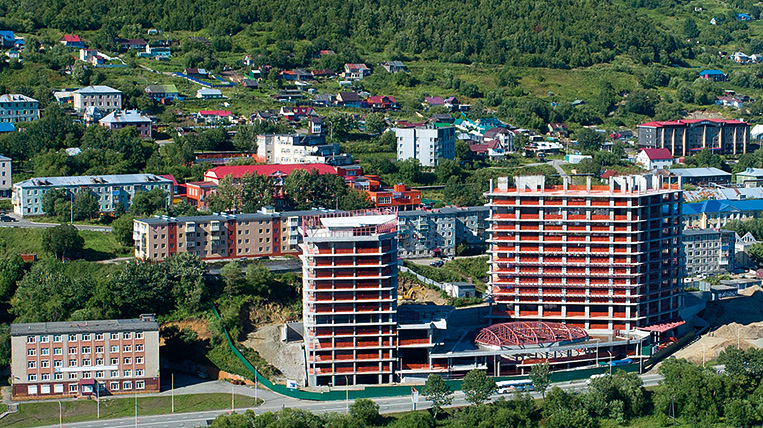 Special project TORA and Free Port
IN WINTER WITHOUT NETWORKS

Hotel and entertainment complex with a total area of ​​28 thousand sq. m in the capital of Kamchatka has been building by Novy Dom LLC since 2017. The preliminary name of the luxury hotel is RIVOL. The first stage of construction - a monolithic frame and supporting structures of two buildings with a height of 13 to 15 floors - is almost completed, the installation of utilities has begun. However, the investor did not succeed in entering this winter with heating and other connected communications, several interlocutors who were familiar with the progress of the project told EastRussia at once, and confirmed in the company itself.

During the implementation of the project, some decisions had to be changed, including those related to networks. For example, in September "New House" sent a request to increase consumption and drainage of water by 69,51 cubic meters per hour - the application is being coordinated. In October, the developer signed an additional agreement with Kamchatskenergo PJSC to increase the capacity by 2200 kW - a project for laying and installing networks is being prepared, which will be submitted for approval to Kamchatskenergo and must pass all approvals by the end of this year. Novy Dom has also submitted an application for connection to heat supply networks. The investor was informed that in the area where the buildings of the hotel complex are built, there is enough thermal capacity to provide a new facility. But Kamchatskenergo will be able to connect the hotel no earlier than the fourth quarter of next year.

Novy Dom signed an agreement with the Corporation for the Development of the Far East (KRDV) on obtaining preferential status of a resident of the Free Port. The status does not imply government assistance in the construction of infrastructure for projects, as in the priority development territories (PDA), although the KRDV provides residents with support when communicating with resource-supplying organizations, acting as a kind of "business ombudsman", says the director of LLC MC TOP Kamchatka Anatoly Kim.

For the "subsidiary" structure of the KRDV "New House" is a significant resident, "and not only because this company became the first resident of the Free Port in Kamchatka - it is very important that the implementation of the project will help solve one of the most pressing problems of the region: for no one it is no secret that there are no hotels of such a class on the peninsula as the one that this investor is building, and tourism is one of the promising vectors for the development of the Far East. "

One way or another, over the winter months of this year, the company intends to carry out work on the installation of engineering networks both inside buildings and outside the construction site, install a transformer substation and a diesel generator set, carry out sewerage systems and build independent treatment facilities. In the buildings themselves, brick walls will be erected between the supporting structures and partitions will be mounted. 120 people will be employed at the construction site in winter, says Mikhail Smirnov, General Director of Novy Dom LLC.

As previously planned, the Korean contractor Dongha Co., Ltd. will be the main contractor for the supply of building materials and equipment for the hotel complex. "For finishing, the best materials from those that are generally available at the moment will be used," he explains, and thanks to the resident status, the developer can save up to 15% of the total cost of imported building materials due to the fact that they do not have to pay customs duties on imports.

As a result, the deadlines for putting the hotel complex into operation moved to the third quarter of 2020. Earlier, we would note that the investor called the first quarter 2020 of the year, and in 2017, when the authorities were only presenting the public with the new hotel project, it was announced that the complex would appear in 2019 year. According to "New Home", 550 million rubles have already been invested in the project, the total amount of investments is 2,009 billion rubles.

Close attention to the New House project is clear: Kamchatka has long been a closed area for tourists, and the hotels built in Soviet times in Petropavlovsk-Kamchatsky, including the largest of them Avacha, Petropavlovsk and Geyser, are not responsible modern standards. Even the outdated number of rooms is not enough catastrophically, because only last year about 200 thousands of Russian tourists visited the peninsula. The flow of foreign tourists is also steadily growing, but there are not a single hotel of the 4 or 5 level stars in the capital of Kamchatka.

The complex that the New Home company is building should help solve this problem. To provide guests of the region with a fundamentally new level of service and comfort for Kamchatka, the complex under construction will include not only a hotel for 170 rooms, but also a fitness center with a full-sized 25-meter pool, a SPA center and an Asian-style bath. There will be a concert hall at 650 seats, which, if necessary, can be used as a conference room.

"The appearance of a hotel of such a capacity and level of service will allow Petropavlovsk-Kamchatsky to receive entire charters of tourists," believes Mikhail Smirnov. "This will solve one of the main problems of the tourist infrastructure of Kamchatka. Now, when charter flights from China, Japan, South Korea arrive -Kamchatsky are not able to receive all tourists, providing them with the same level of comfort. This does not suit the guests of the region. Tour operators will prefer our hotel complex, because we can provide everyone with the same comfortable conditions. Therefore, we expect that the tourist flow will begin to grow when we open our complex ".

Meanwhile, in other regions of the Far East, three similar objects are immediately under question.

In Vladivostok, two five-star hotels, which the international network Hyatt planned to manage, are still frozen. The construction of luxury hotels began in the 2009 year and was to be completed in the 2012 year, by the APEC summit. Budget investments in construction amounted to more than 13 billion rubles, deputies of the legislative assembly of the Primorsky Territory increased funding several times. Repeatedly appointed new deadlines for the objects, but none of them was sustained. In early October, the acting governor of Primorsky Krai Oleg Kozhemyako saidthat hotels in Vladivostok need to be auctioned to someone who undertakes to complete them. One of the hotels on Cape Burnny has already been put up for auction several times, and there were no people willing to buy it. The hotel had to be removed from sale. It was not possible to find investors at the fourth Eastern Economic Forum, although the previous previous acting head of the region, Andrei Tarasenko assuredthat investors from China, Japan and the Republic of Korea are showing interest in these objects, it was informally discussed that the structures could be bought by Oleg Deripaska’s structures. However, while the fate of the hotels remains vague.

And in Khabarovsk, the completion of the construction of a premium-class hotel of the Hilton chain, led by Dalreostroy company by billionaire Igor Neklyudov, was under threat. The hotel was supposed to open at the beginning of 2020, however, in July Neklyudov died, the company was headed by his heirs. The new leadership of Dalreostroi is allegedly not interested in a project in which more than a billion rubles have already been invested, is being considered question about the sale of an unfinished building.
Tags: tourism infrastructure building net Housing and utilities гостиницы free port Kamchatka