Not all that gold 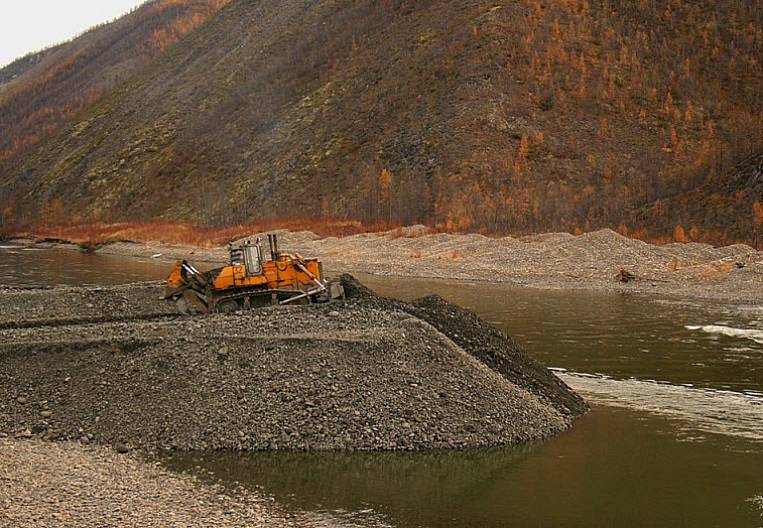 Subsoil users of the Irkutsk region in 2014 year extracted 22,2 tons of gold, thus setting an absolute record. The regional authorities say that this is the limit: in the future, it will become more difficult to increase metal production - this is hampered by the growing energy deficit in the north-east of the region. Solving this problem is only partially possible for the company Polyus Gold, which conducts power lines from Yakutia to the northeast of the Irkutsk Region.

Now almost 95% of ore and placer gold in the Irkutsk region is mined in the Bodaibo region, where the mining and processing enterprises of OJSC Polyus Gold, JSC Vysochaishy, ​​as well as regional companies - ZAO Artel Starateli Vitim, LLC Gold Bodaibo, LLC Drusa and others. In 2011, the company extracted 17 tons of gold, 2012 tons - 18,9 tons, 2013 tons - 20,7 tons, 2014 tons - 22,2 tons. But last year's production is the limit, in future it will be more difficult to increase gold production due to a shortage of power capacities in the Bodaibo district, an official from the Ministry of Economic Development of the Irkutsk region told EastRussia, who is familiar with the situation.

Deputy Director for Research Institute of Energy Systems. L.A. Melentyev, Siberian Branch of the Russian Academy of Sciences Valery Stennikov assesses the existing energy shortage in the region at 20 MW. Now it is covered mainly by diesel power stations (DES), owned by subsoil users. At the DES, the cost of generating electricity reaches 20 rubles per kilowatt-hour. "For comparison, the tariff for electricity received via electric grids is about 1,5 rubles per kilowatt hour," the expert notes. The government of the Irkutsk region in turn predicts that if not to take any measures, then in 2016 in Bodaibo district, the shortage of electricity, taking into account the already announced projects in the field of gold mining, will grow to 71 MW, and in 2019 will amount to 191 MW.

Ivan Noskov, Minister of Housing Policy, Energy and Transport of the Irkutsk Region, said at a recent meeting that the Irkutskenergo project for the construction of the Lenskaya TPP in Ust-Kut, operating on gas from the Irkutsk oil company, could solve the energy shortage problem. According to Noskov, in the prices of the fourth quarter of 2013, the introduction of the first power unit of the Lenskaya TPP at 230 MW was estimated at 26,3 billion rubles. Later it is planned to launch two more power units in 419 MW. Potential consumers of TPP could be the existing gold mining enterprises of the Bodaibo District of the Irkutsk Region (137 MW), the ESPO Oil Pipeline (144 MW), the Udokan Copper Deposit in the Trans-Baikal Territory (368 MW), the Siberia Power (200 MW) gas pipeline, of gold: Dry Log (30 MW), Devil's Trough (24 MW), located in Bodaibo District.

The Lena TPP project has been actively discussed for more than five years; as they say in Irkutskenergo, it is deeply worked out and has chances for realization. According to Oleg Prichko, the general director of Irkutskenergo, the company is ready to cost Lenskaya TPP, if potential consumers enter into power supply agreements. But so far, no one has signed such documents, which oblige buyers to acquire power in the future.

"The applications that we collected from consumers, for the most part, have not been confirmed. None of the consumers has reached the binding agreements, "explained Prichko. In this connection, according to him, the power company postponed the TPP project for an indefinite period.

In February of this year, the Irkutsk government sent a request to the Ministry of Economic Development of the Russian Federation in which it proposed to include the development of gold deposits in the Bodaibo district in the list of strategic ones for implementation in the Far East and the Baikal region. In essence, this is about creating an energy infrastructure for the gold mining industry. The project is expected to bring electricity to the Irkutsk region from the western energy region of the Republic of Yakutia.

The project is divided into two stages. Within the framework of the first, an 110 kW electric power supply line is built in the dimensions of 220 kW along the Peleduy-Chertovo Koryto-Sukhoi Log - Pole substation. The length of the line is 280 km, the project is run by Polyus Gold, in the company's report for 2014 year it is said that the capital costs for it are estimated at 90 million dollars.

Such a project will allow the company to increase gold processing at the Verninskoye deposit in the Irkutsk region from 2,2 million tons to 3,6 million tons of ore per year. It is assumed that the output of gold in this case will grow by 120 thousand ounces per year (in 2014, gold production at Verninskoye amounted to 146 thousand ounces, according to Polyus' report).

The launch of the power line is scheduled for the middle of 2015 year, the implementation of the first stage will allow transferring about 67 MW of electricity to the Bodaibo district, counted in the Ministry of Economic Development of the Irkutsk region. But this only partially solves the problem of energy shortages.

The second phase of the project is already of federal importance. It is about transferring the constructed air line to 220 kW voltage, building the second chain of 220 kW overhead lines Peledui-Sukhoy Log, Sukhoi Log-Mamakan lines, building two substations and reconstructing one more. Such measures will allow to transfer to the north-east of the Irkutsk region about 130 MW of electricity.

According to the government of the Irkutsk region, the second part of the energy project included in the FGC program will require state investments of more than 17 billion rubles, including 12,9 billion - transmission line and substation costs, about 3,2 billion - funds to purchase from Polyus the first stage, 1,3 billion - funds for the investment program "Vitimenergo" (working in Bodaibo district) for the program of reconstruction of the grid economy. The Fund for National Welfare (40%), the Far East Development Fund and the Baikal Region Development Fund (60%) were previously identified as sources of project financing.

The Minister of Natural Resources of the Irkutsk Region Oleg Kravchuk believes that if the entire energy infrastructure is created, the region will be able to produce up to 55 tons of gold per year in the future, though with the commissioning of the largest gold deposit Sukhoi Log, which is now in the unallocated subsoil fund. However, as the revenues to the regional budget will increase in the future, the Irkutsk government has not been considered yet. The total volume of tax revenues to budgets of all levels, according to forecasts, will be 16,5 billion rubles to 2025 year.

Natalia Porokhova, the chief expert of the Center for Economic Forecasting of Gazprombank, says that the problem of energy deficit in the Bodaibo District of the Irkutsk Region was raised even under RAO UES, but it is only now that it has been decided. According to the expert, energy in the Irkutsk region will go from Vilyuisky HPP in Yakutia, now they work with a low load - only 36%.

Director of the Energy Development Fund Sergei Pikin believes that even in the current difficult economic situation, the state can support a project to create an integrated energy infrastructure between Yakutia and the Irkutsk region.

“We already have a good example when the state budget took on infrastructure costs - this is a project of the BoHPP and the Boguchansky Metallurgical Plant. True, it developed in more favorable economic conditions. Now getting money from the NWF or the Development Fund for the Far East and the Baikal Region is, of course, more difficult, and I think the selection of projects of the Ministry of Economic Development and Trade will be guided by their budget efficiency. But in general, the export of non-ferrous metals is a priority for the state, as it fills the budget with money, ”the expert believes.