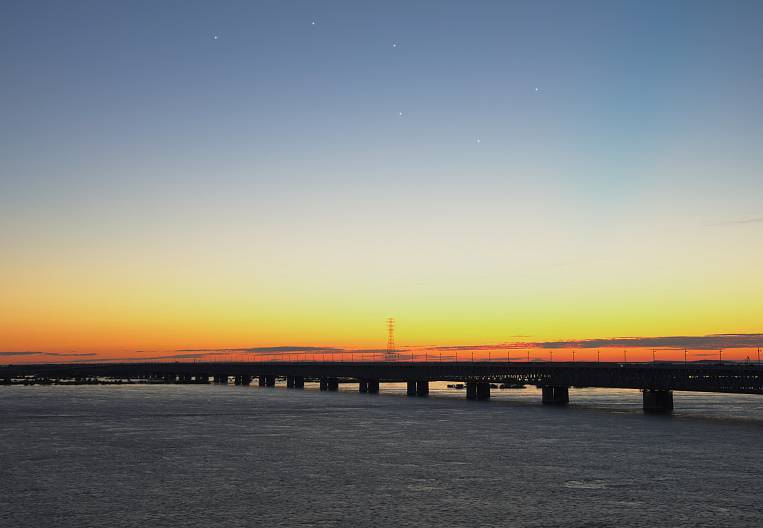 The project to build a bridge across the Lena River is under threat of failure, Russian Prime Minister Dmitry Medvedev said at a recent meeting with reporters. Some infrastructure facilities, including this one, may be frozen due to the redistribution of federal budget funds "in favor" of Crimea. The government of Yakutia said that they intend to fight for the project.

Immediately after the meeting with the Prime Minister of the Russian Federation, a similar statement - about the need to “defend the bridge” - was made by the head of the Russian Ministry of Transport Maxim Sokolov. “Of course, the situation is changing. It can change both geopolitically and financially, he said. - But today the project of the bridge across the Lena went through many stages of its development, and in April of this year the tender procedures were completed. Now competitive negotiations are underway with the winner. We will, of course, always defend the interests of developing transport infrastructure in the Far East. "

Meanwhile, when a few days later the EastRussia.ru correspondent appealed to the Ministry of Transport for a more detailed commentary, he was informed that the agency is not yet ready to formally voice his position on this issue. "We have not commented on this topic yet. We are also not ready to talk about the prospects and benefits of the implementation of the project to build a bridge across the Lena, "said a specialist at the press service of the Ministry of Transport.

If we assess the costs that fall on the federal budget, we must admit that the construction of a bridge across the Lena is indeed one of the most expensive projects in recent years: the total cost of the project (by the way, recently included in the state program "Development of the transport system") is more than 56 billion rubles ... At the same time, the bulk of the costs is over 40 billion rubles. - should be covered by the federal budget at the first stage, plus another 16,03 billion rubles. the contractor will receive a concession agreement (it was planned to sign it in September this year).

This was supposed to be the first in the modern history of Russia example of a concession agreement of such a large scale. The numbers speak for themselves: the length of the bridge spans will be 3181 m, road approaches 18 km, and the construction will be carried out in permafrost conditions, seismic activity, ice pressure, which will require the use of both advanced technologies and modern approaches to process organization. The total estimated project implementation period is 14 years (the first 6 years are design and construction, the next 8 is the operational period during which the concessionaire will receive funds from the budget if there are no complaints about the quality of his work).

"To date, examples of the concession agreement on single objects of this scale and value in Russian practice are absent," said the head of the PKU "Roads of Russia" Ivan Grigorovich. - Yes, and the bridge in terms of its construction falls into the number of unique. The form of the concession agreement was also chosen by us not accidentally: the contractor not only builds the bridge, but also is responsible for its operation during the first eight years. We assume that this approach will be a good incentive to use modern materials and technologies, and at the same time will serve as a guarantee of quality. "

So, now we are talking about the suspension of the project. On one side of the scale - and this is understandable - budget billions. We will understand - what is on the other.

Initially, the bridge across Lena was considered as a strategic object, which should provide development for the economy of the entire Far East. It will not only connect Yakutsk with the road and rail network on the right bank of the Lena, but will also link the federal motorways Lena, Kolyma, Vilyui and Amga. The bridge will also solve the problem of the year-round delivery of goods to remote areas that is relevant for the North.

As reported by EastRussia.ru in the apparatus of the Government of the Republic of Sakha, this argument should become the main one in favor of the construction of the bridge. The main - but not the only one.

"The bridge over Lena is a very important issue for all Yakut people. We built a railway to the Lower Bestakha. Here, taking into account the city of Yakutsk, three federal routes - Vilyui, Kolyma and Lena - come and join at once. And there are regional roads - Amga, Umnas, Kobyay and others, which are also connected to this central area. In addition, there are a river port and an international airport. If we build a bridge, all these objects together will form a single logistics cluster for the whole of Yakutia, "he said. Head of the Republic of Sakha Yegor Borisov. - Now again there is a topic for the difficult negotiations of the republic's leadership with the federal center. The topic is very serious. Differently still can be solved. But I will insist. "

Somewhat earlier, the head of the Ministry of Transport, Maxim Sokolov, spoke about the special significance for the economy of the whole country of the development of the transport infrastructure of the eastern regions. In the department EastRussia.ru provided fragments of the transcript of the meeting held in the Ministry and devoted to the discussion of this issue.

"It is the transport infrastructure that unites the Far East and Siberia with other regions of the country, which is a necessary condition for the territorial integrity and unity of the economic space of Russia," said Maxim Sokolov. - At the same time, the share of the transport component in the gross regional product of the Far East is 11%, while the average for Russia is about 7%. In the Primorsky and Khabarovsk Territories, as well as in the Amur Region, this indicator exceeds 14%, and in the Trans-Baikal Territory it is even higher. Now, within the framework of the Transport Strategy of the Russian Federation, the State Program "Development of the Transport System" (It also includes the construction of a bridge over the Lena. - Ed.), As well as a number of federal targeted programs, provides for a significant range of activities to develop the transport infrastructure of Siberia and the Far East. "

An efficient transport infrastructure in the East (and our publication has written about this more than once) is an increase in economic ties with the Asia-Pacific countries, an increase in international transit, the implementation of large investment projects (primarily in the mining regions) in Siberia and the Far East, etc. etc. Finally, this is a full-fledged inclusion of the eastern regions into the country's unified transport system. This is exactly what is provided for by the Transport Strategy of the Russian Federation, designed for the period up to 2030. By the way, at the same meeting, Deputy Minister of Transport of the Russian Federation Alexei Tsydenov, answering the participants' questions about the amount of costs for the implementation of these programs, clarified that “cutting these programs is not a matter of the interests of the Ministry of Transport, it is a matter of the interests of the national economy” ...

In the apparatus of the government of Yakutia, in an interview with EastRussia.ru correspondent, they also referred to such a recently developed document as the "Roadmap for Achieving Target Macroeconomic Indicators of the Republic of Sakha". It describes the activities aimed at implementing the investment strategy of the republic. This document assumes a significant acceleration of the development of Yakutia until 2020 with an increase in investment to 46,3% of the gross regional product (GRP) by 2015 and to 47,5% - to 2018. As noted in the leadership of the RS, "the implementation of these tasks is associated with the accelerated development of transport infrastructure, the formation of a year-round basic transport network integrated with the all-Russian transport network. This goal is set in the Transport Strategy of the Republic of Sakha, adopted back in 2004, until 2025. Today and then it was about the formation of a transport frame - the synchronous construction of the Berkakit-Tommot-Yakutsk railway, the construction and reconstruction of the federal highways "Lena", "Vilyui", "Kolyma" and regional roads "Amga", "Aldan" and "Kobiai" ". The connecting link for these directions, where efforts and financial resources are concentrated, and there must be a bridge across the Lena. "

According to some experts, the synchronization of the transport system of Yakutia and the saving of costs for the northern delivery - all thanks to the construction of the bridge - will annually (!) Release at least 10 billion rubles. From the budget. "When building a bridge more than 80% of the territory of Yakutia will be provided year-round transport. Due to the savings on the organization of delivery of goods, about 10 billion rubles will be released. A year, "- said Deputy Governor of the Republic of Sakha Anatoly Skrybykin.

In the meantime, the project to build a bridge over Lena is in limbo - the final decision on his fate has not been made. However, the leadership of Yakutia hopes that it will be possible to build bridges and reach agreements with the federal government.