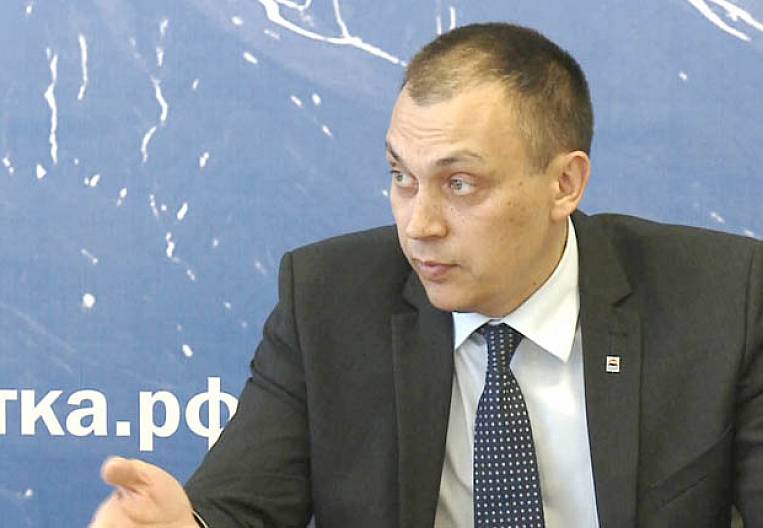 - Vladimir Mikhailovich, we are all aware of the statistics - in 2013, catches in the Kamchatka Territory fell. How do you feel about this?

"I do not see any cause for concern in this." We have practically returned to the level of development of 2008 year, and 874 thousand tons of extracted aquatic bioresources (quoted and not quoted) is a very high index, the best in the country. Let me remind you that in 2013, the volume of production fell for Russia for various reasons. No, for example, those approaches of Pacific salmon that have been present for us during the last 4-5 years. In 2008, Kamchatka showed a catch of almost 840 thousand tons, and then 933 thousand tons, 1017 thousand tons, 1048 thousand tons - the peak was in 2011-2012. This is the time when Kamchatka fishermen actually approached the results of the work of the fisheries complex of the Soviet era.

And this is impressive, although the main pressure of domestic fisheries is now on Russian resources in the territorial sea, inland marine waters and the exclusive economic zone of the Russian Federation, whereas in the Soviet past a significant part of the resources was harvested by our fishermen outside the economic zone of the USSR. And this niche is not yet available to us.

- Can she be available to us?

- Undoubtedly, we need to develop in this direction - to ensure the presence of the Russian fishing fleet outside the economic zone of the Russian Federation in the open waters of the World Ocean, in the economic zones of other states, as it was before. Today, first of all, it is important that we are allowed to go there again, because in the past 20 years we have surrendered almost all our positions - they were taken by the fleets of other states. Need a system and a lot of work. We need a modern large-capacity fleet and much more. However, I believe that, as they say, the road will be mastered by the going.

- Fleet development is an unconditional priority for expansion in the future. However, today we are witnesses of how the coastal infrastructure in the Kamchatka Territory is being intensively formed.

- This is an excellent indicator - only in the period from 2008 to the present, 16 modern fish processing plants have been built in Kamchatka. This is a direct result of the consolidation of fishing grounds and share of fish catch quotas. Pay attention - the state did not even have to provide the fishermen with significant financial support from the state, it just had to define clear and clear "rules of the game". And the fishermen believed in these rules and accepted them. And trust is worth a lot.

And now I very much hope that in this direction the system policy of the state to support the fishing industry and fishermen will be continued. Why do I use the word "hope", not "sure"? Because those proposals and their discussions, which we hear now, for example, from the Federal Antimonopoly Service (about changing the historical principle of fixing quotas, about "quotas under the keel") do not add positivity and faith. People are very worried about these rumors. And we note that already, again (as in the time of fish auctions), a certain stagnation in investments in the regional fisheries complex begins. And although four years ahead of the new consolidation of shares and fifteen years - in fishing areas, the Kamchatka fishery complex already now feels certain negative consequences of the impact of these ideas on the revision of the basic principles.

But at the 3 Congress of Russian fishermen, all representatives of business, fishing community, authorities of fishing subjects of the Russian Federation unanimously voted to ensure that the historical principle did not change, and quotas were fixed for a long-term period.

- What will increase the term fixing shares?

- Quota shares assigned to users are a powerful resource that, unfortunately, is not yet appreciated, even by our state. The issue of estimating the cost of quotas as an intangible asset has not been solved so far, although in this respect, in 2010, there were direct instructions from the Government Commission for the Development of the Fisheries Sector of the country.

It is clear that quota shares are an intangible asset. You can't touch him. And the cost of specific shares is determined by a number of indicators, including: the duration of contracts, the importance of field facilities, the TAC for these objects in the future, the area of ​​fishing, the market value of products, and so on. At the same time, fishermen have long and profitably traded shares for themselves, buying them using the legal way of buying and selling a business, which is defined by law. But why should the state itself not take part in this process, finally determining the significance of shares as an intangible asset, taking control of this process and thus unleashing the hands of the fishermen themselves. By making the process open, traceable and state-controlled.

And most importantly, it would allow the fish business to use quota shares, including when lending.

- Can you evaluate how the industry would develop if the fish business could take advantage of such guarantees?

- We see that only the first step - consolidation of shares for 10 years and fishing sites for 20 years - allowed to invest in this complex a lot of money. 12,7 billion rubles was invested in the coastal fishery complex for the last 6 years. This is only the money that was shown on the statistics. The actual amount of investment in Kamchatka is uniquely higher. And the result of these investments is - in addition more than 3,5 thousand tons of finished products daily, in addition 30 thousand tons of cooling capacity and plus about 2,5 thousand jobs on the coast. If the state confirms its commitment to this policy - the results will be even larger.

- Can you name, please, examples of the most bright, in your opinion, investments.

- The company "East Coast", for example, has invested a billion rubles in its new plant. And, of course, stability for salmon fishing is very important for her. An excellent new plant at "Koryakmoreproduct", while they are simply doing a huge experimental full-scale work on salmon waste processing, investing significant funds in innovative technologies in this direction. But this is the biggest and most acute problem of the whole coastal fishing Kamchatka - to end forever with the so-called "fish dumps". And, taking this opportunity, I once again appeal to my fellow fishermen - saving money on the environment is unacceptable. Probably, not far off is the time when the enterprises that work in the old manner and throw fish waste into the dump will be closed. With this we must end once and for all.

An important and significant for us is the Ozernovsky coastal complex - including the most powerful modern fish processing plants LLC Vityaz-Avto and RKZ-55. This year, the most modern plant belonging to the Ozernovsky RKZ-55 company was put into operation and began to fully produce products - the total investment so far amounted to almost 1,2 billion rubles. The company plans to additionally invest in the modernization of 2015 millions of rubles before 800.

Deputy Prime Minister and Minister of Fisheries of the Kamchatka Territory Vladimir Galitsyn told the editor in chief of "Fisherman of Kamchatka" about how federal messages arouse alarm for the industry and how the initiatives of the fishing industry inspire confidence in the future of the region.

- The relationship between sea and coastal processing has recently changed radically. What do you think about it?

- Yes, some areas on the coast of the peninsula in the course of the way can already do without sea processing. Although the fleet is on pick-up, during salmon salmon approaches to the coast. Answering your question, I would like to note that no matter what happens, no matter how the fishing fortune has changed, the coastal plants are not a fleet that can be driven to any point of the World Ocean. Plants are for a long time, it's forever. They will remain on the territory and they will, first of all, give jobs to those who live in this territory - residents of coastal villages.

- Recently, industry prospects related to aquaculture are often discussed. Are you a supporter or opponent of this direction?

- In the Far East of Russia, both in the US and Japan, there are unique opportunities for pasture industrial salmon farming. And these are skillfully used by those who know a lot about this issue. First of all, Japan and the United States - for example, Japan annually mines, with virtually no natural populations, up to 250 thousand tonnes of artificial chum salmon. Of seven hundred LRZs targeting oceanic salmon pastures of the Northern Pacific, Russia owns only a miserable part - 56 (there are about 350 plants in Japan and 300 in the USA). We have excellent examples in Kamchatka - every year a significant amount of return of the artificial chum is recorded, reproduced, for example, in the Paratunsky hatchery. I am sure we must work systematically in this direction. Aquaculture in Kamchatka has a great future.