The fight for the gas tank began 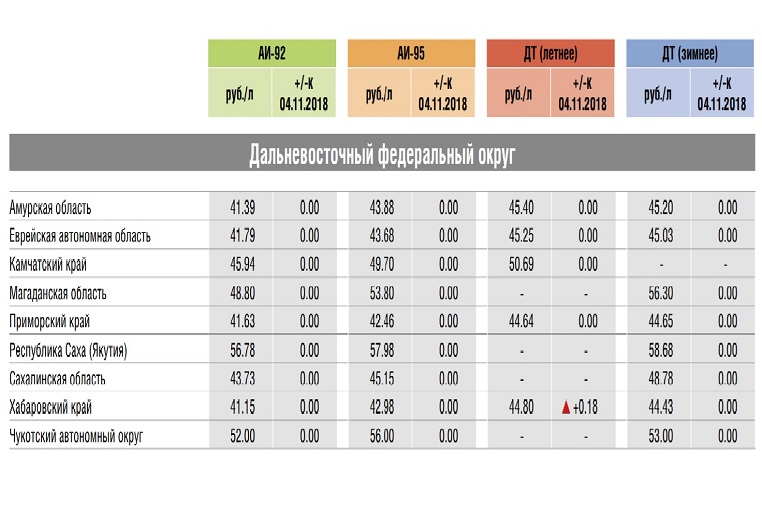 This week, statements were made against independent gas stations from two key players on the fuel market in the Far East - the Independent Oil and Gas Company (NOC, the former Alliance Oil Company), Eduard Hudainatov and Rosneft. NNK sent a letter to the Federal Antimonopoly Service with a request to deal with the pricing policy of independent filling stations in the Kamchatka, Primorsky, Khabarovsk Territories and the Amur Region, Interfax reported.

The company has accused some owners of independent retail in "provocative actions", stressing that "an important factor in the growth of prices for most owners of private gas stations is the widely implemented chain of" independent "intermediaries who leave their speculative profits often off-shore." According to NNK, prices at independent gas stations in the regions where the company operates are significantly higher than at gas stations of vertically integrated companies (VINK), and the difference reaches up to 10 rubles per liter.

In turn, the head of Rosneft, Igor Sechin, in an interview with Kommersant-FM, said that independent gas stations owning on average 30% of the Russian market "just influence pricing because they are supported by FAS: if we give a price lower then we immediately get into antitrust proceedings, which means we are even forced to raise the price. " As an example, he cited the situation in the Primorsky Territory. “There is a huge company called Oktan. Formally, it has a dozen gas stations, and the owner of the network at all corners shouts that vertically integrated companies are choking private business and so on, but in fact it forms pricing in the region” - said Igor Sechin.

He also noted that "a structure has taken shape when monopolistic structures are formed in certain regions with a well-established supply chain, which are aimed at increasing value." "And even vertically integrated companies, in accordance with antitrust laws, are forced to adapt. But we will deal with this very seriously now," said the head of Rosneft.

Note that the topic of "local monopoly" in the fuel market of the Far East in September of this year was raised by Deputy Prime Minister Yury Trutnev, who stated that "the issue of gasoline prices is not associated with a shortage of fuel or a shortage of refining capacity." "In practice, the rise in prices is associated with a simple but nasty thing, which is called local monopolism. Basically, the increase in gasoline prices is due to the fact that one company buys fuel. And the government is looking for global macroeconomic causes," the official said.

The alarm of VICs about independent gas stations is quite understandable. November 12 at the federal level, the government and major oil companies have agreed to curb rising prices for petroleum products until March 31 2019. According to the agreement, prices should remain at the level of 2018 of the year, and the volume of fuel supplies should grow by at least 3%. In such a situation, that Rosneft, that other large companies combining oil refining and sales, can only reduce costs - or expand their market shares. You can do the latter only by squeezing regional gas station networks.

Supervisory authorities have already taken over independent filling stations. The FAS and the Federal Tax Service were instructed to begin conducting unscheduled inspections of stations that do not have their own fuel production, paying maximum attention to those gas stations where prices exceed the indicative level of small wholesale prices for fuel by 4% or more. ITC is fixed for each of the subjects of the Russian Federation. The average ITC in the country for AI-92 is 53,5 thousand rubles. per ton, AI-95 - 56,6 thousand rubles, winter diesel fuel - 53,6 thousand rubles.

In the Far East, NOC and Rosneft own approximately 75% of the market (45% and 30%, respectively). Both companies in the region have both refineries (at NNK - in Khabarovsk, at Rosneft - in Komsomolsk-on-Amur), and their own distribution networks. In addition to these enterprises, the needs of the Far East in fuel are provided by the supply pipelines of Eastern Siberia - the Angarsk Petrochemical Complex and the Achinsk Refinery Rosneft, the Omsk Refinery Gazprom Neft. According to the Ministry of Energy, in 2017, 1,5 million tons of gasoline and 2,7 million tons of diesel fuel were shipped to the territory of the Far Eastern Federal District.

In addition, in each region of the FEFD there are independent refueling networks. In the Khabarovsk Territory and the Jewish Autonomous Region it is, for example, the Resursneft network. In Komsomolsk-on-Amur and Khabarovsk, the Flagman gas station network is operated by the same-name group of companies of the local entrepreneur Vitaly Burlakov. In the region and in the neighboring Primorye, gas stations operate under the brand name DNT ("Dalneftproduct"). There are small gas stations under the brands "Bixur", "Nefteprodukt-Service" and others. In Primorsky Krai, in addition to the Octant network mentioned by Igor Sechin, there are petrol stations under the brands PrimOil, Benzo, PTK and so on.

Meanwhile, for the Far East, no matter what high-ranking officials or top managers of vertically integrated oil companies assert, the problem of the high cost of fuel is due to a number of objective circumstances. The main one is a large transport shoulder for the supply of gasoline and diesel fuel to most of the regions in the east of the country. Due to the need to transport fuel over long distances in the Far East, on average, a higher level of prices for oil products inevitably remains. The government understands this, having established the largest ITC for the subjects of the Far Eastern Federal District: 72,66 thousand rubles. per ton of AI-95 for Yakutia and 71,97 thousand rubles. for Chukotka.

According to the monitoring of the Ministry of Finance of Russia, on November 5 2018, the average retail price for AI-92 gasoline in the Far Eastern Federal District in its “old” boundaries (9 subjects of the Russian Federation) was 43,64 rubles. per liter, which is higher than the price in Russia for 2,09 rubles. Over the week, the price increased by 17 kopecks (0,39%), from the end of December 2017 of the year - by 2,38 rubles (5,77%). Similar figures for diesel fuel are: average retail price - 49,3 rubles. per liter, which is higher than the price in the Russian Federation for 4,04 rubles, weekly price increase - 31 kopek (0,63%), price increase from December 25 2017 year - 3,45 rubles. (7,52%). According to the "Central Dispatch Management of the Fuel and Energy Complex"On November 11, the average prices for various types of fuel in the DFO regions underwent minor changes. 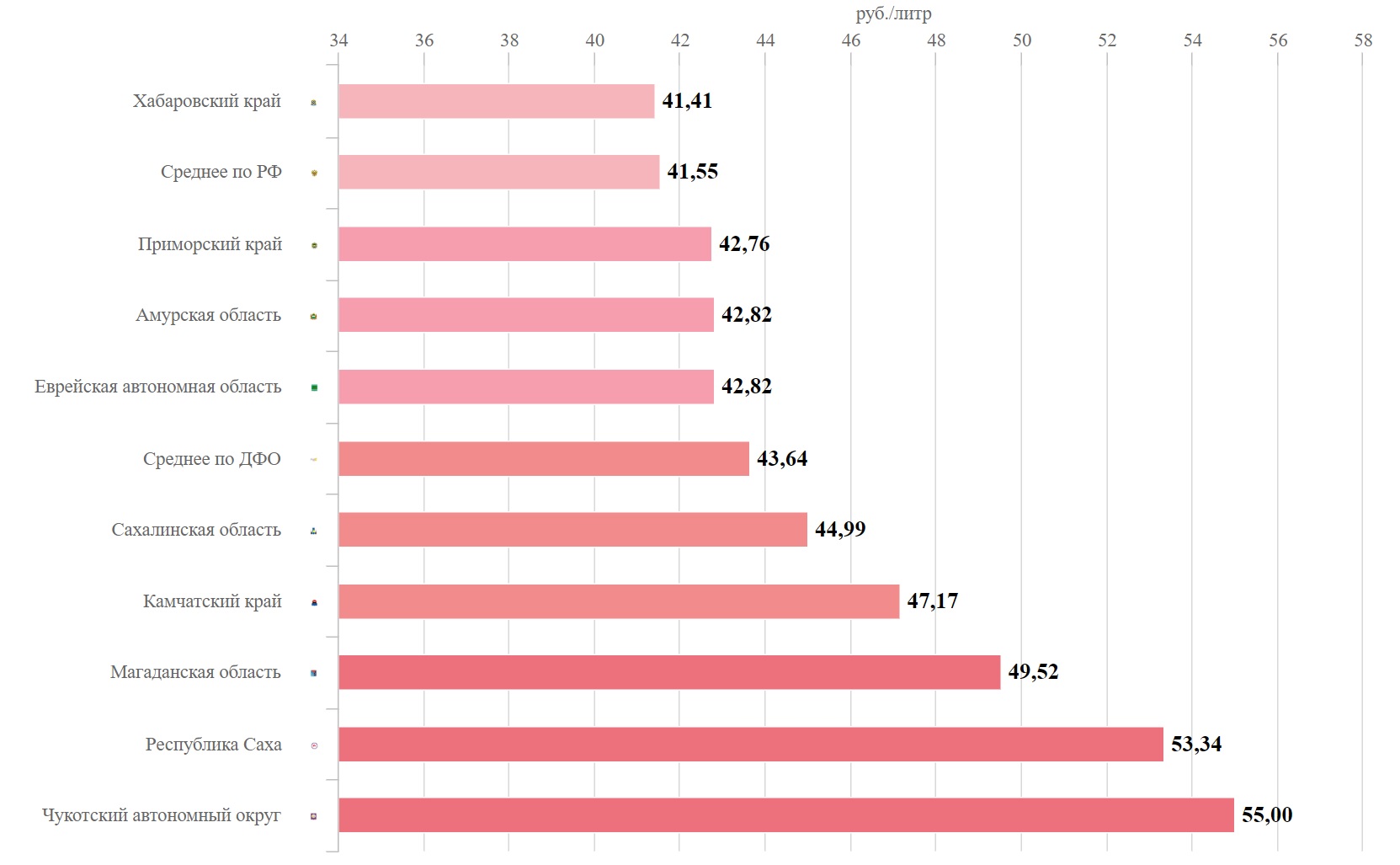 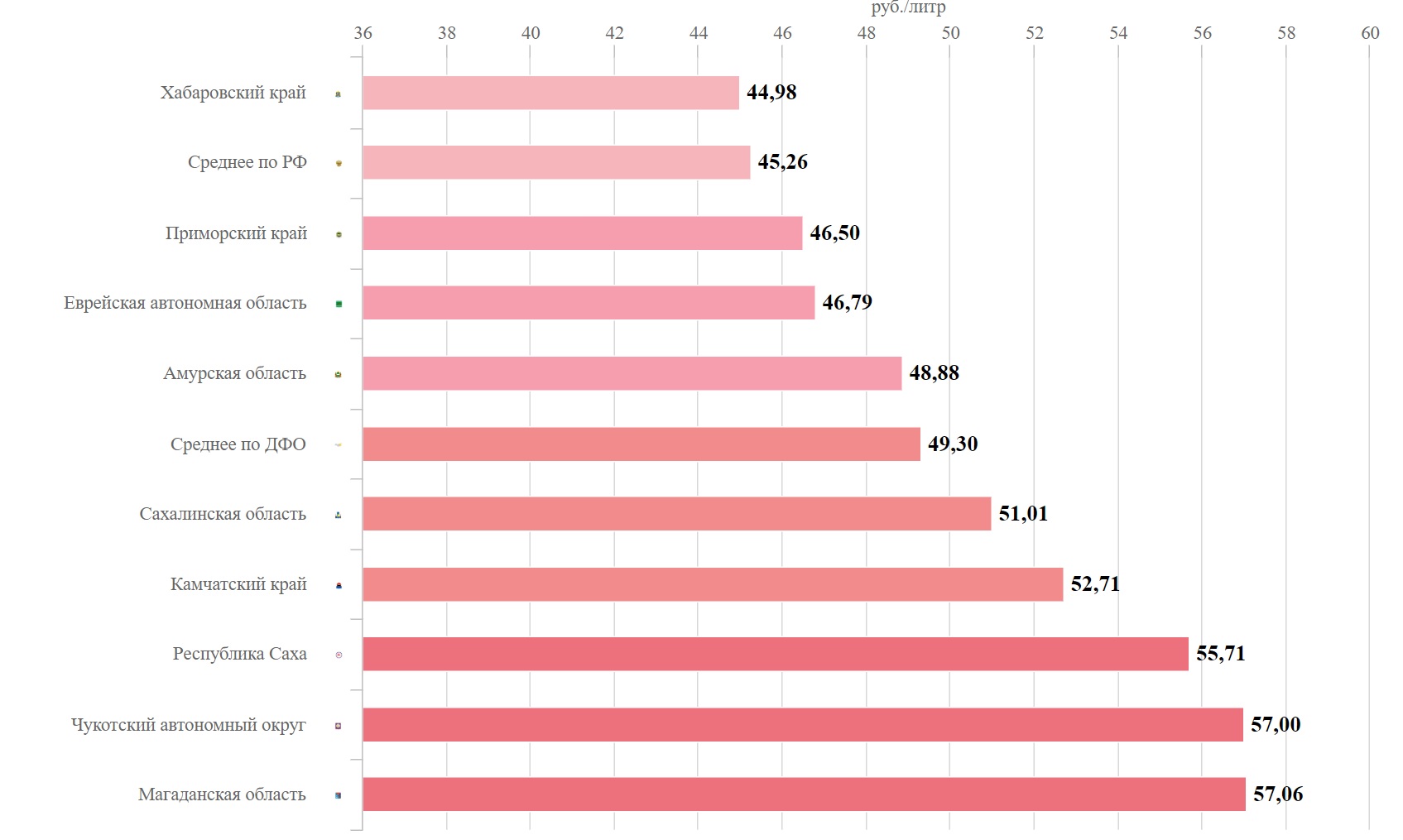 The average picture for the DFO is very “polar” if you look at it through the prism of regionality. From this point of view, the cost of fuel in close to major transportation arteries and refineries in the Khabarovsk and Primorsky Territories, the Amur Region and the Jewish Autonomous Region is quite comparable with the average Russian. Quite another thing is actually island Kamchatka and Chukotka, other regions of the Far Eastern North and Sakhalin.

The most interesting thing is that in large Far Eastern cities, independent gas stations keep prices lower than large chains. In Khabarovsk, an express analysis of prices at three gas station networks conducted today by EastRussia showed that while NNK and Rosneft are selling A-92 for 41,3 rubles. per liter, the Dalnefttorg network manages to keep the cost at 40,5 rubles. per liter. With the cost of a liter of diesel fuel at 46,65 rubles. from two vertically integrated oil companies, "DTN" sells this type of fuel for 44,5 rubles. 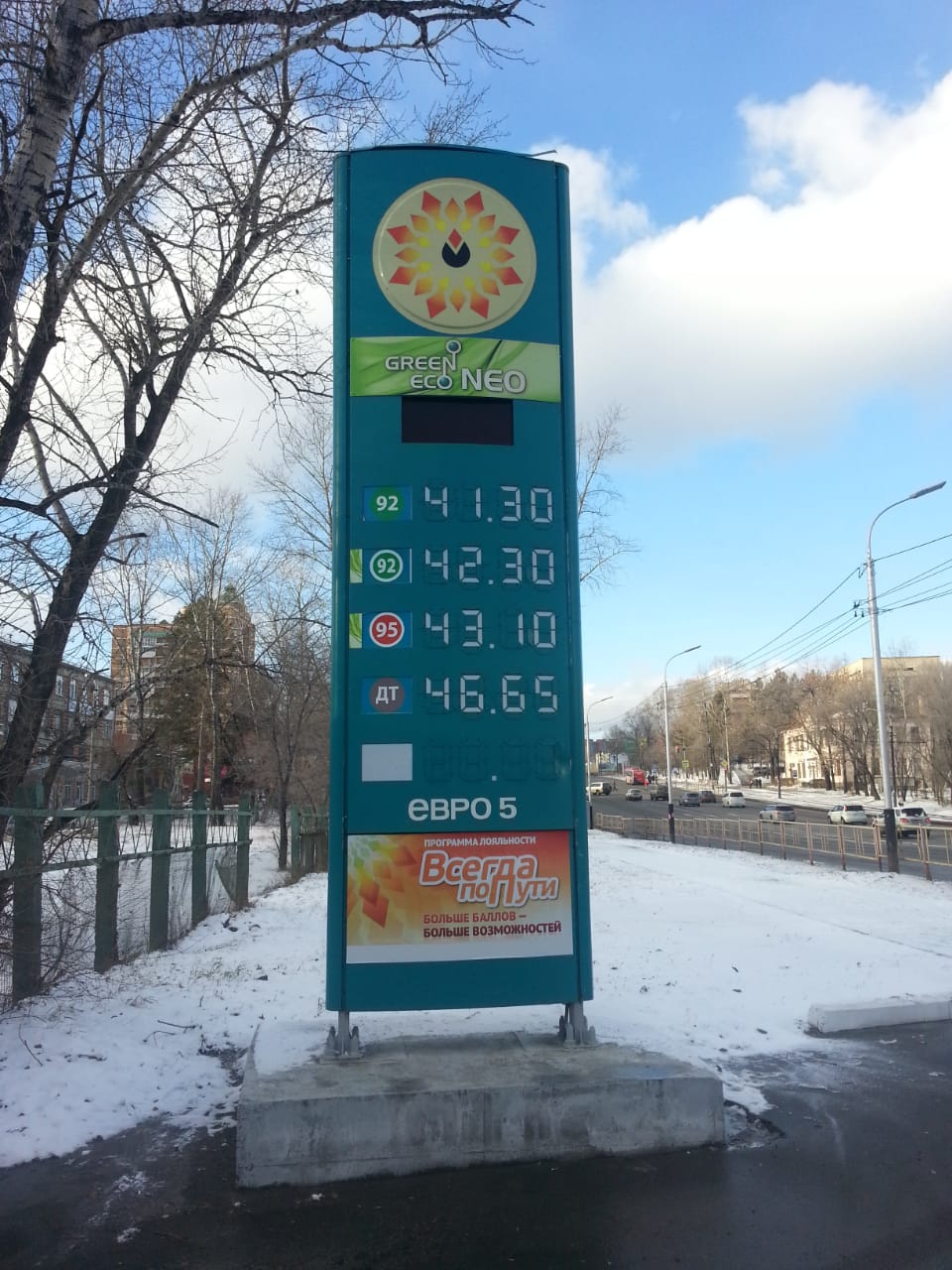 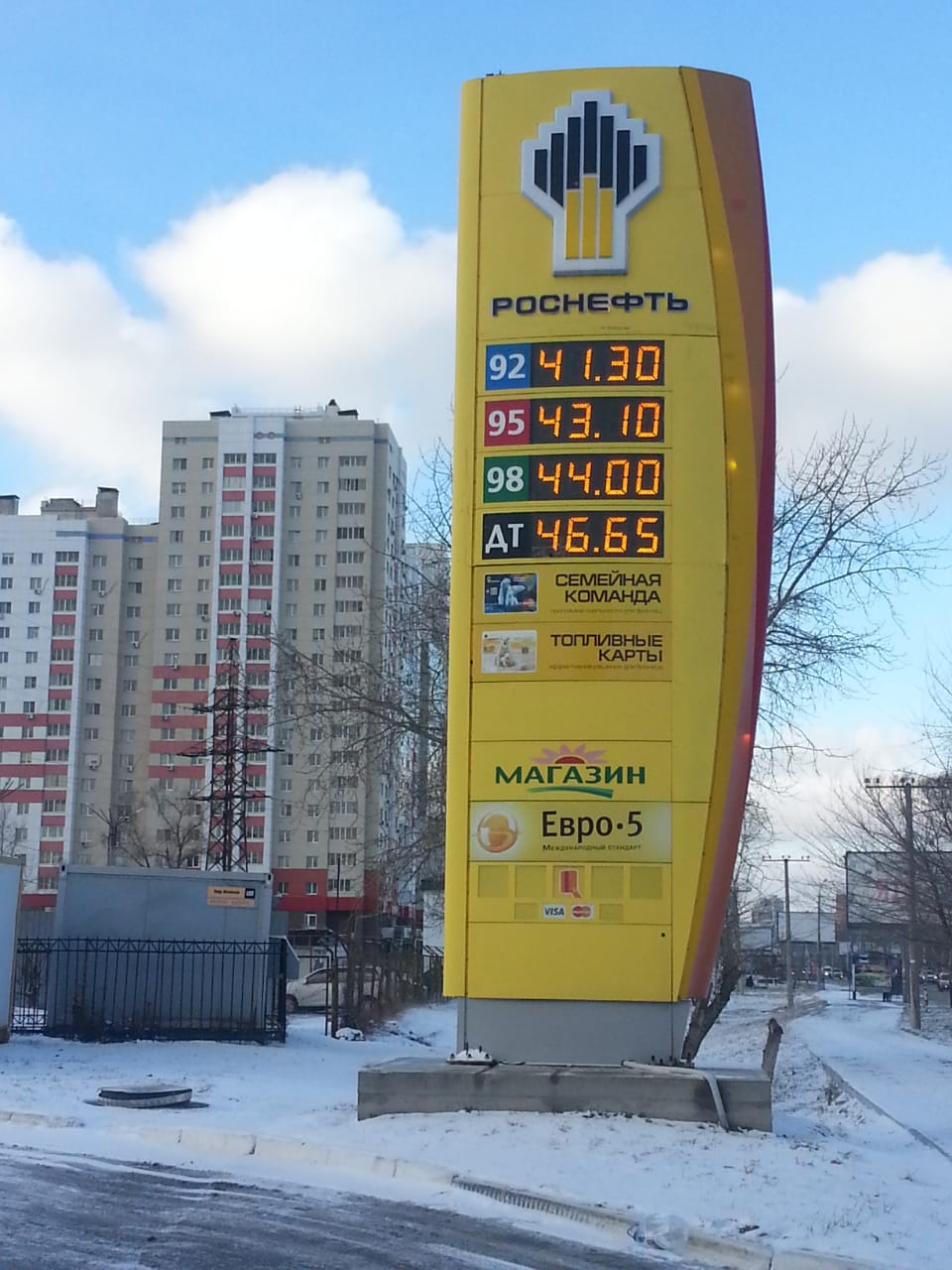 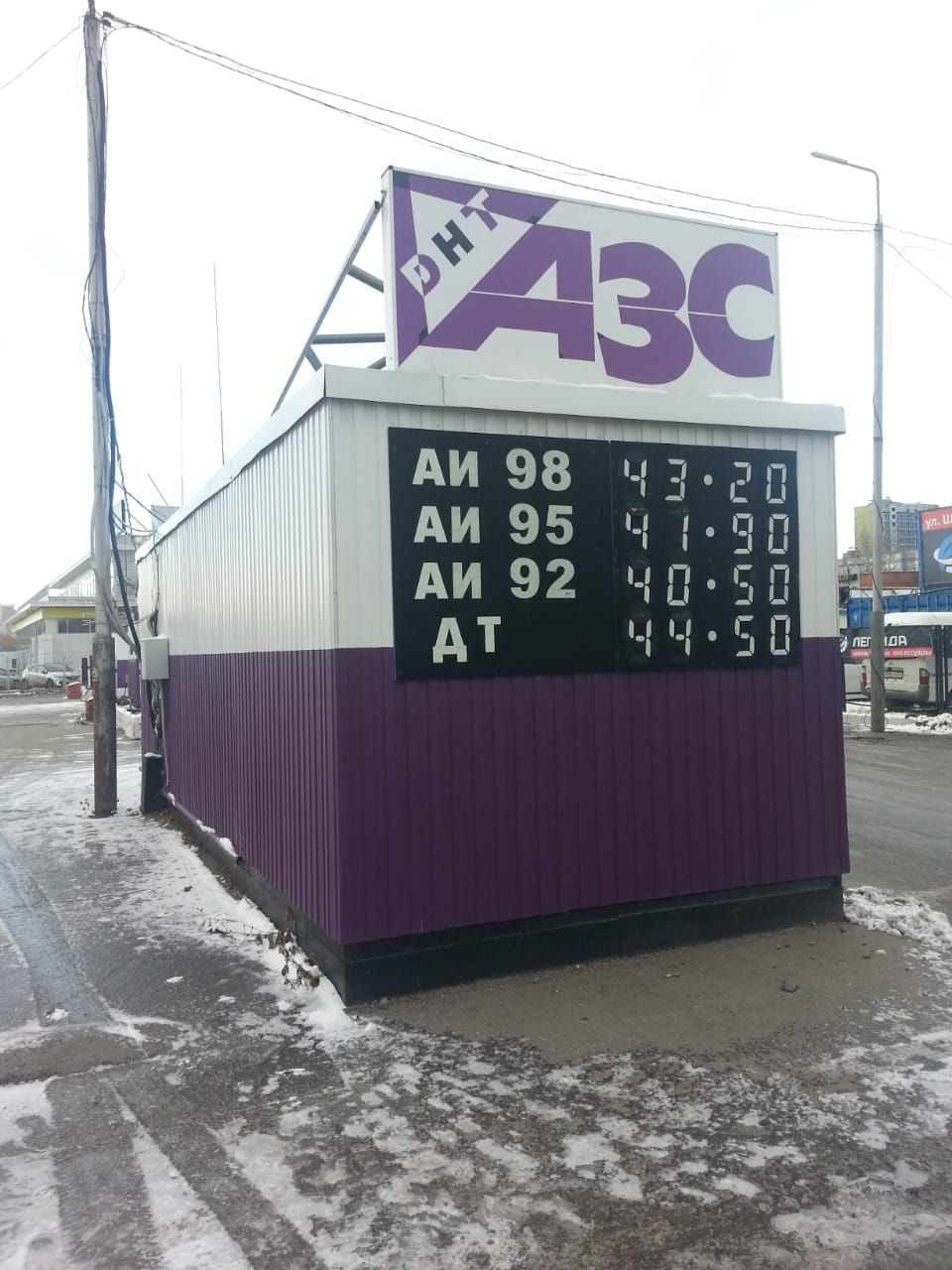 What is the struggle in this case?

Taking into account that 1 liter of gasoline weighs about 0,75 kg, and diesel fuel - 0,85 kg, it is easy to estimate that last year in the Far East gasoline was sold at least 80 billion rubles. (if the average price is 40 rubles per liter), and diesel fuel - not less than 140 billion rubles. (the average price is 45 rubles per liter). Thus, the retail revenue in the FEFD fuel market is at least 220 billion rubles. 25% of the market now occupied by independent filling stations is at least 55 billion rubles. annual retail turnover. For comparison, at the end of 2017, NNK-Khabarovsknefteproduct, PJSC, a sales subsidiary of NNK in the Khabarovsk Territory and the Jewish Autonomous Region, sold 97 thousand tons of fuel at its 440 filling stations, having received revenue of 16,8 billion rubles.

Most of the Far Eastern residents living in large cities are unlikely to gain from the disappearance of independent gas stations from the market. As for the residents of remote settlements, they traditionally complain about the high cost of fuel. At the end of October, a similar scandal broke out in the Khabarovsk Territory: farmers from the village of Mogilyovka, Lazo District, found that overnight the cost of diesel fuel jumped from 47,5 rubles. per liter to 57,5 rub. - As much as 10 rub. The company “GUR”, which owns the gas station, did not comment on the situation. At the same time, it is also quite difficult to imagine that the NOC or Rosneft will supply branded gas stations in the populated 1 to thousands of Mogilyovka residents, located in a logistical deadlock, in 8 km from the Khabarovsk-Vladivostok federal highway.
Tags: fuel The FAS prices Rosneft NOCs