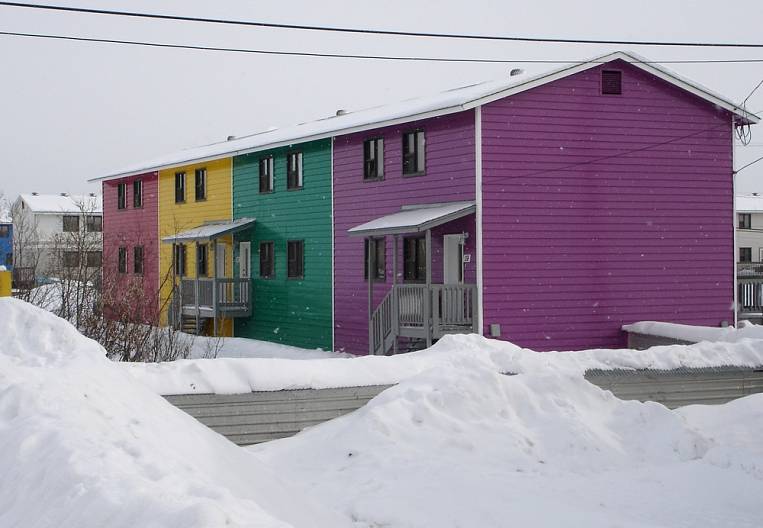 Kolyma towns and villages are built on permafrost, which for various reasons thaws, which threatens the old buildings and requires a different approach to construction.

In the center of Magadan, a pit was dug for the construction of the future of the city’s largest shopping center. An unusual place was chosen for him. Permafrost, if it was here before, retreated. But at a depth of 10 meters - groundwater, which immediately began to flood the pit. The builders found a way out in a completely new technology for Kolyma. Throughout the perimeter, dug wells, in which they installed special pumps.

“There is a dewatering well, a pump, a pump, a sensor system. Pumps are installed in the wells. They constantly pump out water, a sensor system records the water level. All information flows to the control station. In general, water is pumped out automatically, "said Nikolai Starichenko, chief engineer of the Magadanstalizdelie enterprise.

As soon as the water rises above a certain level, the pumping unit is started. When the building is built, wells with pumps will continue their work, protecting the object from flooding.

“The Magadanka River is close here, it is literally a hundred meters away. And the groundwater goes, it all gets flooded. Now, thanks to this system, which works, the groundwater level under the center of the excavation is maintained lower by half a meter, ”said the head of the permafrost station of the Institute for Permafrost Studies at the SVNIMS IMZ SB RAS Sergei Guly.

The introduction of new technologies for the construction of houses on the Kolyma may have to be more and more often, say scientists. Permafrost, which has always been a reliable base for buildings, behaves differently.

The construction of each house in Kolyma begins with research. Experts determine the depth of the permafrost and how thick it is. If all this is not done, then it will turn out as with one of the houses on Kolymskoe Highway in Magadan. It was built in the 90-s of the last century, without taking into account local features. As a result, after six months he simply collapsed. To ensure that such errors do not recur, the soils at the site of future construction are carefully checked in the laboratory. Specialists drill multimeter wells, from the bottom of which samples are taken. Studying them in detail, they conclude what and how to build.

“When defrosting ice turns into water. The water is squeezed out and the ground begins to thicken. The soil is deposited, and unevenly. This is the main specificity of permafrost construction. And this must be taken into account during construction, ”said Victor Bassisty, General Director of the Hydrogeologist enterprise.
But houses built according to all the rules must be checked periodically, permafrost experts believe. The buildings themselves give off heat, the frozen ground beneath them gradually thaws.

“If earlier we used only piles that cut through the frozen strata, now the ground has thawed. Such types of the base as piles are not required. Each object is an engineering structure. In order to further exploit it, we need to conduct some kind of testing, because we have no idea what happens to the permafrost over the 30-40 years of building operation, ”said Professor, leading researcher of the permafrost station of the Permafrost Institute of the Institute of Permafrost Symptoms IMZ SB RAS Vladimir Vlasov.

A separate problem for permafrost is global warming, which also affected the Magadan Region. The average annual temperature in the last forty years on the Kolyma rose by two degrees. And if the residents do not notice a particular difference, then for the buildings of the region, climate changes can become disastrous. The fact is that many of them were built on the ground, frozen to tens of meters in depth. It was assumed that the permafrost under them will not go anywhere, but the situation has changed, and now the future of such houses is in question.

Permafrost scientists intend to study this problem. For this purpose, they plan to drill many multimeter wells in different areas of Magadan. They will drop a special measuring device and understand what happens to the permafrost.

“We are interested to know what happened to it in connection with global warming and the impact of the city. This is a very interesting work, in principle, unprecedented. There is no anywhere in the world, ”said Konstantin Verkhov, Deputy Head of the Northeastern Permafrost Research Station. These studies have quite an applied application. The fact is that the stability of many buildings in Kolyma depends on the behavior of frozen ground. For example, the House of Culture in the Avtotek neighborhood of Magadan may be living out its last years. The building right before your eyes goes cracked. DK was built on permafrost, a defrost which was not even predicted decades ago. But in the end it suddenly happened. This problem is actual for many houses on Kolyma. In some places, scientists and builders had to urgently strengthen the foundation. Otherwise the building would simply collapse.

Scientists pay particularly close attention to the oldest houses, many of which were built when they had not even thought about the problems of soil defrocking. The problem of climate change and unpredictable soil behavior in Kolyma also applies to hydraulic structures. A large study of scientists, for example, carried out on the dam of the technical reservoir of the Magadan CHP.

"Magadan has already experienced warming by about two degrees of average annual temperatures during the observation period. How does this affect the internal state of the dam? If some processes inside the body of the dam begin and threaten security, then we will take technical measures, "said the chief engineer of Magadanskaya TPP Anatoly Orlov.

The problem of permafrost defrosting is also relevant for the Kolyma highway. In winter there is minus fifty, but scientists each year record all the amazing cases where the foundations of houses subside due to defrosting the ground. Now, say permafrost, they will explore the grounds of hundreds of Magadan buildings. Where permafrost suddenly began to give up, you need to strengthen the foundation. And to prepare for the fact that gradually this problem will alarm the Kolyma people more and more often.