We are proud of the results of our work 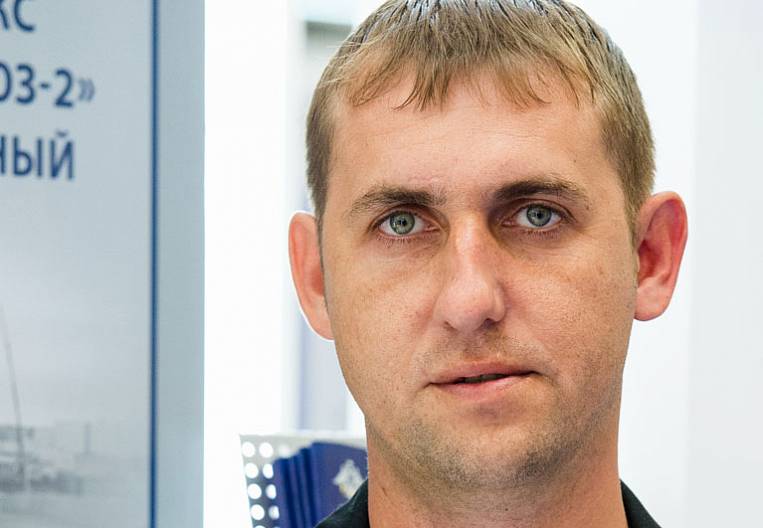 The romance of the Amur taiga, which has become a reality: the Vostochny cosmodrome, the first launch, high technologies, hundreds of new facilities and modern infrastructure for work and life, the new city of Tsiolkovsky…. Behind these words is the hard daily work of thousands of builders, for whom the Vostochny cosmodrome has become an integral part of life and even fate.

One of them is Alexander Smirnov - Acting Head of Construction Department No. 713 of Dalspetsstroy. A career officer, military builder, was born in Kashin, Tver region in 1984. In 2006 he graduated from the Military Technical University of the Russian Ministry of Defense. By assignment, he got to Dalspetsstroy, went from the foreman to the head of the branch. He participated in the construction of many special-purpose facilities in the Far East, as well as facilities for the gas industry, the Rybachy military hospital in Kamchatka, the Erofei sports arena, the Amur sports complex, a cardiovascular center, a cathedral and a seminary in Khabarovsk.

On the construction of the launch facility, the Vostochny space center has been working from the very first day: first, it led the documentary support of the project, and in January 2013 went directly to the object. Therefore, it is not surprising that Alexander, with his eyes closed, can spend on all the underground floors of the launch facility, talking for hours about a particular technological operation. A subject of special pride is the power ring.

“Working at such a facility is, of course, difficult, but interesting. Each technical operation is unique in its own way, often requires non-standard approaches to its implementation. So, when installing the formwork on the power ring of the launch structure, shields were needed, which, when assembled, were a circle. To order from the manufacturer? For a long time, therefore, it was decided to manually make the necessary shields right on site. With the help of a special system, plywood was bent with filigree precision to the design diameter and assembled into a general structure in the form of a ring. Was it difficult? Yes but Eyes are afraid, and their hands are doing. Studied during the production process, even had to invent their own "know how", - Alexander says smiling.

Of course, after the launch of the carrier rocket, you can breathe and with a smile, remember all the difficulties and the most difficult situations that had to be overcome.

Alexander recalls: “In the summer of 2013, the Amur Region lived in an emergency situation due to monsoon rains that did not stop for months. Now these are modern roads, but then there were temporary - unpaved, which were washed away by rains, it was difficult even for "all-passable" equipment. During work on construction sites, raincoats and rubber boots did not save the workers - the overalls did not have time to dry out overnight ... Rapid streams of water flowed down the slopes of the pit of the starting structure, which washed away the soil from the slopes from a height of 32 meters. The pit looked like a huge pit, which was filled with water mixed with sand every day. The depth of this muddy "reservoir" reached 2 meters. But even despite the storm warnings, the work did not stop - they carried out reinforcement, installed the formwork, laid the concrete mixture. At the same time, every day it was necessary to eliminate flushes and landslides, to equip drainage systems. Submersible pumps, pumps, vacuum machines were used to pump out rainwater around the clock. It was hard, but we did it! And how else - Dalspetsstroy was faced with a task of state importance ".

Three years have passed since that time. Behind the difficulties with a lack of working documentation, severe winters with frosts, reaching minus 50 degrees at the launch site, when hands in gloves froze to the armature. Over the years, the builders have done a colossal work: they have erected the starting and technical complexes, as well as several hundred more buildings and structures, built highways, which any capital city can boast of. All facilities are provided with utilities on a permanent basis from a permanent source. Heating, water, electricity, ventilation, sewerage networks are all available for use by end users. The operation of all systems of the cosmodrome was fine-tuned like clockwork, which made it possible to make the first launch of the Soyuz-2.1a launch vehicle.

“We have completed construction. Now the launch complex is a completed facility. It is pleasant to look at the blue and white modern buildings and structures, and if you saw how the launch complex was transformed, and the entire cosmodrome: green lawns, flower beds, bushes and trees. Everything has been done for the specialists who will operate the cosmodrome to make them feel comfortable. For this, recreation areas with comfortable benches and gazebos have been created. And the technical complex even has a volleyball and table tennis court. You know, what is important, here on the construction of Vostochny, we worked in one bundle with other main departments of the Spetsstroy of Russia, and the agency's management, the head of our enterprise - all of them paid great attention and continue to pay to the object. It often happened that with top-level managers we thoroughly understood production problems, for example, at the “launch pad”. Imagine, the time is already past midnight - we are working on the third floor. Yes, it's cold, but hard - the white light, as they say, has not been seen for a long time. But over time, they did not take into account - the work was carried out around the clock, and it was impossible to delay making the most important decisions. I am satisfied with the results of my work ... our work! "

Alexander did not accidentally say "our work": next to him at the construction of the cosmodrome his younger brother Alexei Smirnov, the head of the section of the Construction Department No.713 Dalspetsstroi, works. He is also a military constructor, like his brother: graduated from the Military Technical University of the Russian Defense Ministry. Alexei came to the East in 2012 year. He worked as a master, and then as a foreman at the construction of the starting construction. At the cosmodrome, he met his wife, then still future. Valentina Smirnova - engineer of the production department. For these young guys, the spaceport became a destiny.

Work on the first stage of the Vostochny Cosmodrome is nearing completion. Today Dalspetsstroyevtsy launched a wide front of work on the creation of objects that did not participate in the first launch of the launch vehicle.

“Our facilities passed the test with honor by the first launch, but it is too early to calm down. Has come Hot and responsible time - the transfer of constructed facilities in operation. We also work without days off and holidays, but how else can it be during the work of the state commission for the acceptance of objects. "