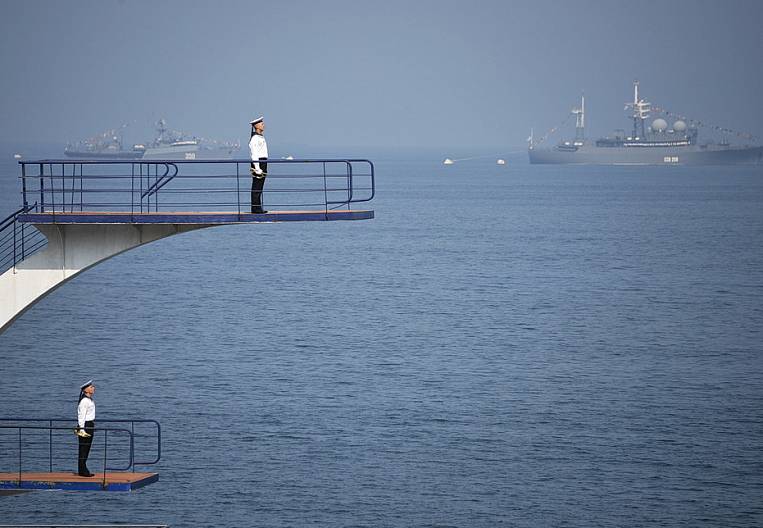 In Primorye, as part of the festive events, demonstrated a unique robot-terminator of the Pacific Fleet.

The last Sunday in July in Russia marks the Day of the Navy. For Vladivostok, this holiday is perhaps one of the main: it is celebrated for 75 years already, and in the Primorye Territory there are hundreds of thousands of families of military seamen.

The parade became the highlight of the extensive festive program in the city. It was attended by a submarine, a base minesweeper, a small anti-submarine ship "Sovetskaya Gavan", a large landing ship "Nikolai Vilkov", a large anti-submarine ship "Marshal Shaposhnikov", an ocean rescuer of submarines "Alagez", a destroyer "Bystry" and the flagship of the parade - guards missile cruiser "Varyag". From his side, the commander-in-chief of the Pacific Fleet Sergey Avakyants greeted the sailors.

“The symbol of unparalleled courage for all Pacific sailors will be exemplified by the heroic feats of the Varyag and the Koreyan gunboat. Today on the account of the crews of the ships standing in this system, dozens of hikes, rescue operations, protection of ships in the Gulf of Aden, unique hydrographic operations. Nowadays, the fleet continues its renewal: its forces are replenished with ships and auxiliary vessels. The fleet receives modern types of weapons. We continue to maintain our high potential and ensure the security of the country in the Pacific Fleet. I congratulate you on the occasion! I wish you and your families strong marine health, happiness, faithful service for the good of the fatherland! ”, S. Avakyants congratulated the Pacific Ocean residents.

The event was attended by the Governor's Governor Vladimir Miklushevsky, Vladivostok Mayor Igor Pushkarev, the Legislative Assembly Speaker Viktor Gorchakov, Metropolitan Veniamin, the first persons of the Eastern Military District. V.Miklushevsky noted that "today in our turbulent times the Pacific Fleet is reliably protecting the eastern borders of our Motherland."

The audience was shown warships and submarines, installations of battles of four fleets of Russia, waltz of tugboats on the water, combat training of sailors and the appearance of "Neptune", the role of which 14 year is performed by the captain of the first rank Viktor Kravets. The military helicopters and planes, which are able to detect in the depths of a submarine and to liquidate the enemy, flew into the sky.

The citizens showed unique modern combat radio-controlled robots "Platform-M", which are already used for reconnaissance, detection and destruction of stationary and mobile targets, protection of important facilities. The robots were developed by the Research Institute "Progress" in Izhevsk.

In the central square of Vladivostok, Russia's record was set for the preparation of salad from sea kale. A few dozen cooks prepared 524,5 kg of salad. The guests were treated to army porridge.

Without porridge, there was also in Petropavlovsk-Kamchatsky, which took the baton of the holiday from Vladivostok. According to the press service of the Governor of the Kamchatka Territory, the celebration of Navy Day in Kamchatka began with the release of ships to the rocks. Three brothers, at the entrance to Avacha Bay at the point of giving military honors to the military sailors who fell at the defense of the Fatherland, from XRUMX Water wreaths were lowered. Wreaths were assigned to all military monuments; On ships, ships and submarines, the Andreevsky flag and flags of the coloring were solemnly raised.

At noon, the solemn procession of the troops of the Petropavlovsk-Kamchatsky garrison began in the city. He was received by Rear Admiral Viktor Lina, commander of troops and forces in the Northeast of the Russian Federation. Governor of the Kamchatka Territory Vladimir Ilyukhin, congratulating the Pacificers, noted that for Kamchatka this state holiday is of particular importance.

“Dear friends, Kamchatka has a sea soul. The history of our peninsula is inextricably linked with the navy. For many years, it was the military sailors who were the main driving force behind the development of the region: they brought civilization here, built cities, defended the far eastern outpost of Russia - the Petropavlovsk port. That is why the Day of the Navy is our common holiday, a holiday for all residents of the Kamchatka Territory, the symbol of which has forever become our navy, - declared V. Ilyukhin. - I sincerely congratulate those who serve in the navy today, Pacific veterans, all for whom the navy has become a vocation, a destiny! Thank you for your love for the sea and naval service, for your loyalty to the traditions that you carry through long hikes, through long separation from your families. I wish you strength, courage and good health! Let those who are dear to you always wait for you on the shore! Happy holiday, dear friends, Happy Navy Day! ”.

In the holiday program there was a performance of the orchestra of the command of troops and forces in the North-East, a competition of a building song among the units.

“Today, festive salutes will illuminate the night sky of Astrakhan and Vladivostok, Kaliningrad, Severomorsk, Sevastopol, Novorossiysk and Sochi. Today, thousands of privates and officers of the Navy of the Russian Federation will celebrate their day - the Day of the Navy! And may many of them meet this holiday at their post, they must firmly know: we praise their hard service. We are grateful to them for the peace and quiet in the country. Wherever you are now: on the water or under the water, on the shore or on the deck, accept our sincere congratulations! We wish you strength and valor, health and vigor, good luck and good luck! And let golden stars shine over all the seas and oceans with festive salute! On the holiday, on the Day of the Navy of the Russian Federation! ”, The users were congratulated by such warm, sincere words social networks.

As previously wrote EastRussia.ru, Within the framework of the general modernization of the armed forces of Russia, special attention is paid to the Far Eastern direction. 1 June, a detachment of Pacific Fleet ships (Pacific Fleet) returned to Vladivostok after Russian-Chinese exercises. Until the end of the year, a strategic missile submarine "Alexander Nevsky" should arrive at the point of permanent deployment to Kamchatka. At the end of the factory tests, Vladimir Monomakh will arrive to Kamchatka.