Ministry of Health for Rehabilitation

Today, law enforcement agencies, based on the materials of the administrative case previously filed by the OFAS for the Khabarovsk region, opened a criminal case against the Minister of Health of the region, Alexander Vitko. The official, who holds the post of minister from the year 2007, is suspected of abuse of official authority (part 1 article 285 UK Criminal Code). Notice of this 5 June was sent out to 11 health facilities, which, according to the investigation, was damaged in the purchase of disinfectants, a source in the healthcare system said. According to him, inquiries from the investigation came today in many medical institutions of the city and are "actively discussed in closed groups in messengers." 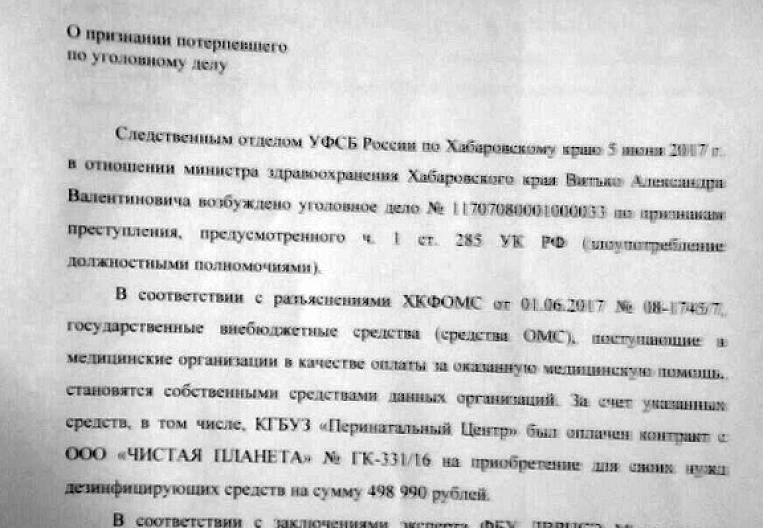 We will recall that the investigation into the purchase of disinfectants was initiated at the end of 2016 by Impulse LLC, which lost the tender for their supply. Contracts for the supply of funds for a total amount of 5,48 million rubles. 11 institutions, including the regional clinical hospitals № 1 and 2, were concluded in October-November last year with LLC "Clean Planet" from Zvenigorod (the founder of the legal entity, according to the Unified State Register of Legal Entities, is Alexey Zhelezny, the general director is Victoria Pluzhnikova). The company is the official distributor of a manufacturer of disinfectants - the Moscow-based OAO NPO Novodez.

Law enforcement authorities were alarmed by the fact that in the auction documentation for the supply prepared by the regional Ministry of Health, the "disinfectant funds, whose manufacturer is Novodez OJSC," were listed in the primary amount, "the OFAS said.

Pre-investigation inspection of the purchase of the beginning of the FSB for the region. As a result, the antimonopoly authority this spring concluded that the representative of Novodez, acting in conjunction with officials of the Ministry of Health of Khabarovsk Krai and the regional bureau No.1, "coordinated the above auction of disinfectants for the needs of 11 medical institutions" - with the goal of winning "Pure planet". The Office considered this a violation of Art. 16 of the law on the protection of competition, the administrative proceedings are still pending.

Already experts of the Ministry of Justice and the Department of Economic Security and Countering Corruption of the regional Department of the Ministry of Internal Affairs in early June issued opinions that the purchase of disinfectants only by the regional perinatal center caused the latter damage in the amount of 279,6 thousand rubles. - it was for this amount that the prices under the contract were higher than the average for similar cleaning products in Khabarovsk. The investigation believes that this is the amount of damage, the notice says, a copy of which is available to EastRussia.

The regional department of the FSB declined to comment on the situation.

Alexander Vitko is one of the most experienced ministers of Khabarovsk governor Vyacheslav Shport. He came to the post of head of the regional healthcare system in March 2007 - even under the former governor Victor Ishaev. Prior to that, Mr. Vitko held the posts of department head and first deputy minister, and at 2005-2006 he worked as chief physician of the Regional Clinical Oncology Center of the Regional Ministry of Health. At the moment, the minister, according to unofficial data, is on sick leave.

The last scandal with the institution of criminal proceedings against high-ranking Khabarovsk officials occurred in February 2016 - then the investigation detained on suspicion of abuse of authority (part 2 article 285 Criminal Code) of two officials: the head of the Ministry of Construction of Andrei Skomorokhov and the supervisor of the same branch, Sergei Ignatovich. Then the charge was re-qualified. The former deputy chairman of the Krai government is accused of abuse of office, mediation in bribery and illegal business, ex-construction minister - in excess of authority.
Tags: Здравоохранение Khabarovsk Krai criminal case 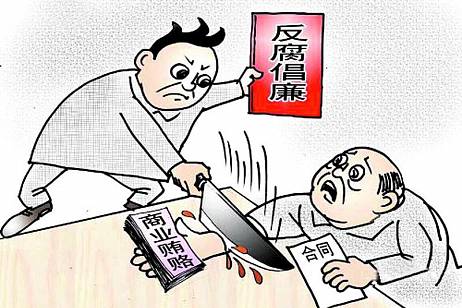 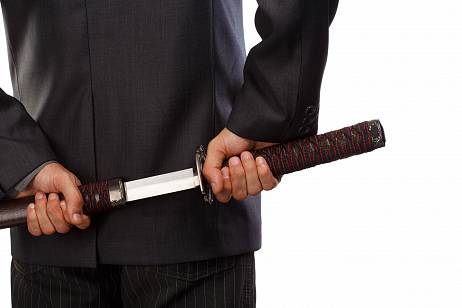 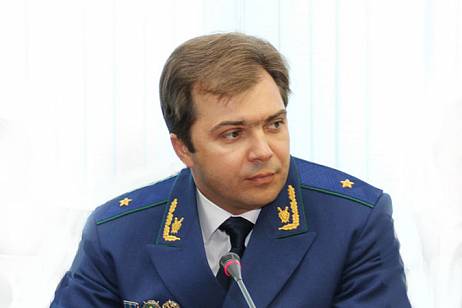