Between the division of responsibility and leapfrog 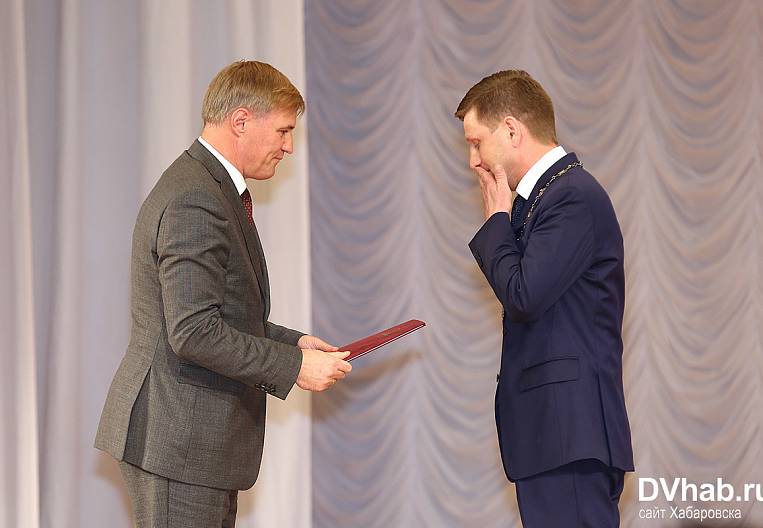 According to the charter, the Khabarovsk governor heads the government. The deputies lost the right to negotiate the vice-governor in 2013 year - during the reign of the previous head of the region, Vyacheslav Shport. The current governor, Sergei Furgal, won the election from the Liberal Democratic Party in September 2018. At the beginning of November, representatives of United Russia introduced a draft amendment to the Duma, and Sergei Furgal managed to appoint almost all his deputies by that time. Earlier, he stated that he was ready to form a coalition government from representatives of all parties.

November evening 12, as Reported EastRussia, the amendments considered the relevant committee of the regional council, recommending parliament to adopt the bill. But on November 15 before the start of the plenary meeting Sergey Lugovskoy, using the right of the speaker and co-author of the amendments, withdrew the billhowever, stressing that the consideration is just postponed.

The initiative MPs insist that they act strictly within the law: the right to coordinate the members of the government of the Khabarovsk Territory to the regional parliament is given by Federal Law No. XXUMX-FZ. “Both the government and the Duma, being the highest authorities in the subject, are equally responsible for the actions or inaction of the authorities,” explained Sergey Lugovskoy. “Today we cannot say that only the governor is responsible for all decisions. The Duma, taking the bills of the governor, shares all responsibility before the voters. Sergei Furgal formed, in fact, the government, appointed almost all. These rules will apply to further events: if the composition of the government changes. We support the idea of ​​forming a coalition government, ”the speaker said.

Recalling the bill on the coordination of the deputies of the governor, Sergei Lugovskoy explained that “one of the options would be to introduce more modified proposals”, and did not rule out consideration of the bill “later on at meetings”. “We heard the opinion of the government, we will continue to work, we will wait for specific proposals from the governor. While there is only a denial, so you need to say everything. There is pressure on the background of the media, companies, although this should not be, so we took a pause, ”the Duma’s speaker said after the meeting.

Unofficially, the Duma said that they had retreated under pressure from the regional government: on the eve of the meeting, a number of deputies allegedly received calls not to appear at the Duma meeting on the pretext of a hospital or business trip.

ARGUMENTS OF THE GOVERNOR: DETERMINED RESPONSIBILITY AND PR

On the day when the Duma was to consider for the first time the amendments approving members of the government, the governor of the Khabarovsk Territory, Sergei Furgal, said that the initiative "dilutes the responsibility" of the branches of government. “I bear personal responsibility to the residents of the Khabarovsk Territory for each deputy, for each minister. In general, I believe that the regional duma should be addressed not with these PR moves, which in principle have no meaning, but with the budget, legislative work and instructions that the deputies promised to their voters, ”said Sergei Furgal.

On the eve of his representative in Parliament, and. Justice Minister Stanislav Zalivin bluntly told the deputies that the governor was against the adoption of the bill. “The governor is fully open for discussion, ready to listen to any proposals on candidates. In his opinion, this bill will significantly limit its powers. The proposals boil down to working together to develop the Khabarovsk Territory. We will share the powers later, ”he stressed. Heads of the Ministry of Justice.

Interestingly, with the negative response of the government to the draft law until this point, the regional council committees did not dare to recommend draft amendments to laws for adoption in plenary sessions, and the executive expressed disagreement, as a rule, with opposition projects. This time, the bill is supported not only by United Russia, which has the most significant faction in parliament, but also by the Communist Party of the Russian Federation (three deputies), whose representatives said that "there are no grounds for not adopting this law."

By the time when the amendments were first introduced into the Duma, and then removed from the agenda, Sergei Furgal already appointed all deputies, except for the Vice-Governor, deputy chairmen for domestic policy and social issues.

The decision of the deputies to return on November 21 to the consideration of the draft law on the coordination of members of the Khabarovsk government came as a surprise to many. But parliamentarians today made it clear that they did not intend to retreat.

Tatiana Movchan, the head of the relevant committee on government and ISU, introducing the bill to her colleagues, said: “If Sergey Ivanovich (Furgal. - EastRussia) as the governor of the Khabarovsk Territory, a team will be formed that today will not have someone sacking, we will only be happy that a good team has been selected, and the norm we are introducing may not apply. ”

Representatives of the executive branch continue to insist that the amendments will limit the head of the region's right to independently form the regional government. Stanislav Zalivin, opposing the authors of the bill, said at the Duma that the mechanism proposed by the deputies to express distrust to members of the government is "unlimited." And this can lead to a halt in the work of the government and "to a leapfrog in appointment." “We need legal guarantees that the Duma will not do this. In addition, the haste with which this bill is being adopted does not contribute to a constructive dialogue, ”said the acting president. Minister of Justice.

The Duma, however, did not listen to the opinion of the officials, having adopted the bill in the first reading. By November 27, the parliament should be amended for the second reading, after which the draft has all chances to become the law in force: the regulation allows legislators to pass draft laws in the second and third readings at once.

“We would like to hear the opinion of the governor, but so far only criticism, rejection in general and some kind of global challenge in social networks and in the media, to which, I think, information and opinions are biased. To put it mildly, this is not good, ”said Sergey Lugovskoy.  The head of the Communist Party’s faction in the regional parliament, Viktor Postnikov, said that the situation around the bill was inflated and advised media representatives to “not drive a wave”, because it is not for the benefit of the common cause.

“There is no PR here, no attempts, and so on. There is a solution and the desire to establish the normal work of the two branches of government. And this is according to the law, according to the federal law, ”said Victor Postnikov.


WHAT CAN REALLY LIMIT SERGEY FURGAL?

It should be noted that in the Khabarovsk Territory, the conflict has turned into a generally routine issue: the legislative assemblies of many constituent entities of the Russian Federation have the right to coordinate the key members of the government, and this does not create any problems for either the executive or the legislature. Khabarovsk Legislative Duma in different periods had the right to approve officials of different levels. Neither under the first governor Viktor Ishaev, nor under the second Vyacheslav Shport, this also did not introduce any particular dissonance in the work of the two branches of government. Moreover, the Duma did not happen to refuse to agree on the candidacy proposed by the regional government.

Sergei Furgal found himself in a somewhat more complex political reality - whatever one may say, he won the elections not from the ruling party, but from the Liberal Democratic Party of Russia, which is considered, albeit a parliamentary, opposition. The first steps of Mr. Furgal as governor, from the suspension of state purchases for the needs of the regional government to check the justification of spending and reducing the number of deputies to freezing the price of bread, demonstrate behavior that is not typical for a person in the system. This is what the voters expect from Sergei Furgal, and he is a kind of hostage of the situation - the “people's governor” must inevitably come into conflict with the ruling majority.

At the same time, the Khabarovsk Territory with the election of Sergey Furgal, without losing the trust of the center and the presidential administration as a whole, badly ruined relations with an important part of the existing vertical - the office of the presidential envoy in the DFO Yury Trutnev, who The premiere is an extremely important element of the system for any region of the Far East.

And if Sergei Furgal, according to rumors, has already found the candidacy for the post of deputy chairman of the Khabarovsk government on social issues - the current head of the Duma Committee on Budget and Taxes Natalia Pudovkina can become one, then the names of candidates for the post of vice-governor and deputy chairman for domestic policy in public the space hasn't leaked out yet. These two positions are political (the first replaces the governor at the time of his absence, the second supervises all relations in the election process) and must satisfy all the players - the presidential administration and the plenipotentiary. 13 deputies, United Russia, who initiated the amendments, in this situation fall between two fires: most of them and their relatives want to live and work happily in the Khabarovsk Territory, but you can not ignore the instructions from Moscow.

Thus, the situation in the region, instead of approaching a constructive one, is turning into a stalemate: neither side is clearly determined to give in. This makes the outcome of the confrontation unpredictable.