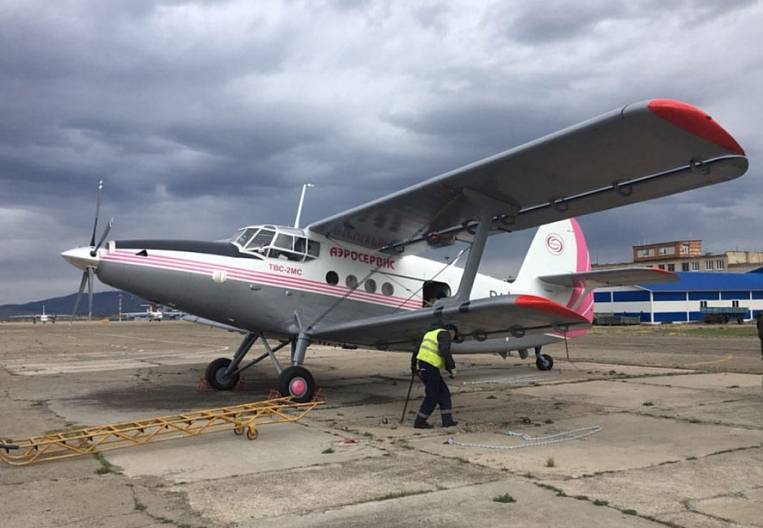 Photo: ariss.ru
Transbaikalia became one of the first subjects of Russia, where the aircraft FA-2MS is widely used in passenger air transportation, replacing the legendary An-2 small aircraft biplane. At the same time, the region can become a pilot for the introduction of new-generation technology - the aircraft Baikal TVS-2-DTS, which will be produced in neighboring Buryatia.

WITH AMERICAN "HEART"
An-2, produced from the end of the 1940-x, for a long time was the basis of domestic small aircraft. Today in Russia in the state of airworthiness is about 300 aircraft of this series. Siberian Research Institute of Aviation. Chaplygin (SibNIA) was proposed to modernize the aircraft by replacing the standard powerplant with the TPE331-12 gas turbine engine manufactured by the American Honeywell Inc. The changes have affected other parts of the machine, as well as a salon with a capacity for up to 12 people who have become more comfortable.

The upgraded aircraft received the designation TVS-2MS. Compared to its predecessor, the maximum range of the vessel’s flight has increased by one and a half times (more than 1,2 thousand km), and the maximum height doubled to 4 thousand meters. By replacing the engine, the car became more economical: as noted by SibNIA, the vessel has fuel consumption 10% less than An-2. Today, TVS-2MS operators are a number of companies, including Trans-Baikal Aeroservice.

Information EastRussia: the aviation complex in the Trans-Baikal Territory is represented by three airports (the largest in Chita following the results of 2018, served 389,5 thousands of passengers) and 43 landing sites, including those located in remote settlements of the region, where other means of transport are difficult to reach. Currently, about a dozen socially significant routes operate on local airlines in Transbaikalia.

In January, 2019 of the TVS-2MS of the Aeroservice company made the first passenger flight. At the end of July, the total flight time of the aircraft was approximately 700-800 hours. Today they have a fairly wide route network closed, regular flights are operated in the directions of Chita - Krasny Chikoy, Krasny Chikoy - Menza, Chita - Usugli, Usugli - Tungocochen, Tungocochen - Krasny Yar and others. In addition to the transportation of passengers, flights on air ambulance and other aviation works are organized.

“The plane shows itself positively, in principle, the crew has no comments. There are, of course, children's diseases that are easily removable, this machine does not bring us any problems, ”said Pavel Krinitsyn, Deputy Director General of Aeroservice LLC, told EastRussia.

According to him, besides TVS-2MS, the company considered other options for fleet renewal. In particular, through the acquisition of American light single-engine aircraft Cessna Caravan. “This car is good, in demand. But for our regions it is not quite acceptable. What is good An-2, he can fly to almost any site. Cessna is selective, ”says Pavel Krinitsyn.

Follow the example of "Aeroservice" are going to other regions of the Far Eastern Federal District. As Maxim Startsev, deputy director of the Kolyma Aviation Unitary Enterprise, informed, in the Magadan Region, infrastructure for small aircraft is currently being developed. The emphasis is on the creation and updating of landing sites for small aircraft in Susuman, Yagodny and Seimchane. For the flights will be purchased two TVS-2MS. About plans to buy this car and informed the government of the Khabarovsk Territory.


SKY EXPECTED BY BAIKAL
Modernization of the An-2 is a promising direction, since the Soviet aircraft are rather unpretentious, their landing gear allows them to land even on unprepared ground. At the same time, carriers are waiting for the emergence of new domestic technology. The same SibNIA has developed a design for the aircraft Baikal TVS-2DTS, which will be assembled at the Ulan-Ude Aviation Plant (part of the Russian Helicopters holding). In April, 2018, the demonstration of the prototype. As demonstrated by experimental flights, the novelty is able to operate at low temperatures, take off and land on short unpaved runways with a low coating density. The functional of “Baikal” is wide - it is planned to be used for rendering emergency medical care, extinguishing forest fires, doing agricultural work and, of course, organizing passenger transportation (aircraft capacity - 14 passengers).

"The aircraft FA-2DTS may be considered for the future to perform flights within the municipal areas in the case of interest of the regional administrations," - said the head of the Far Eastern Interregional Territorial Administration of the Federal Air Transport Agency Sergei Taranenko.

With the support of the Ministry of the Russian Federation for the development of the Far East and the Arctic for small aircraft 20 aircraft can be acquired. However, the process of creating TVS-2DTS was delayed. The first planes of the Ulan-Ude plant intend to transfer to operation at the end of 2022 of the year, whereas earlier it was planned to do this in the 2021. The situation with “Baikal” was discussed during a recent visit by the Deputy Prime Minister of the Russian Federation Yury Trutnev to the airline. "We talked about what needs to be done to start the industrial production of the aircraft as soon as possible, and it appeared in the Far Eastern sky," he commented after the meeting.

There is no doubt that the Baikal is needed by the Far East. “I talked with all the governors, whose regions are included in the territory of the FEFD. They are all interested in the appearance of the aircraft, in order to be economical, reliable and modern, ”said Yuri Trutnev.

For the successful implementation of the TVS-2DTS aircraft project, it is proposed to form a roadmap where all activities with deadlines for their implementation will be stated: when the development of documentation is completed, the necessary certificates will be obtained, and expertise will be passed. “We need to accompany every step in order for the project to be successful. While we are moving slowly, we need to speed up the process, ”said the Deputy Prime Minister.


To increase traditii
In the meantime, potential operators are discussing vessel configuration with the manufacturer. If the declared take-off and landing characteristics suit the carriers, then other parameters raise questions. For example, the "Baikal" record for the aircraft of this type, the maximum range - 4 thousand. Km. “It seems to us that this is an unnecessary characteristic, all of which will lead to the weighting of the aircraft. It flies far, but is it necessary? For our regions, the plane should be easy to operate and at the same time strong enough, with a normal powerful engine, modern avionics, ”argue at Aeroservice.

Polar Airlines reminds that TVS-2DTS has a projected American Honeywell engine TPE331-12UAN. It is necessary, they emphasize in the company, that the production of these units is carried out in Russia. The management of Polar Airlines also proposes to adopt a program of preferential leasing of new aircraft, “Baikal” and Il-114-300 (this aircraft should replace the outdated An-24 and An-26) by providing subsidies from the federal budget of the State Transport Leasing the company.

Work on the development of the design model of the aircraft "Baikal" continues. “TVS-2MS, which we are now exploiting, is a deeply modernized An-2. “Baikal” is another car. But I wanted him to absorb all the best and reliable things that were on the Soviet plane, ”concluded Krinitsyn.

The requirement for reliability of the equipment is due to the fact that air traffic plays a large role in ensuring transport accessibility. “In the Trans-Baikal Territory there are hard-to-reach settlements, such as, for example, Chara Kalarsky District, in which air transport is the only operational and year-round view. Domestic air routes are needed and in demand. Currently, their optimal number, all eight are subsidized from the regional budget. At 2019, 32 million rubles was allocated for this purpose. and separately 10 million rubles. - on the route Chita - Chara. The government of Zabaykalsky Krai intends to develop regional aviation, increasing the number of routes based on the needs of the population, ”said Alexander Osipov, head of the region, told EastRussia.
Tags: Transbaikalia Chita aviation routes transport