Air traffic in the Far East often becomes the only one for many settlements, especially in winter or during a thaw period. However, now such flights are inaccessible - sometimes there are not even normal runways, and prices bite very much. Yakutia and Kamchatka have drawn up proposals to increase the availability of intraregional air routes, including those operated by small aircraft. Among the initiatives are the easing of state regulation of the industry and the provision of economic conditions for new carriers to enter the local aviation market. 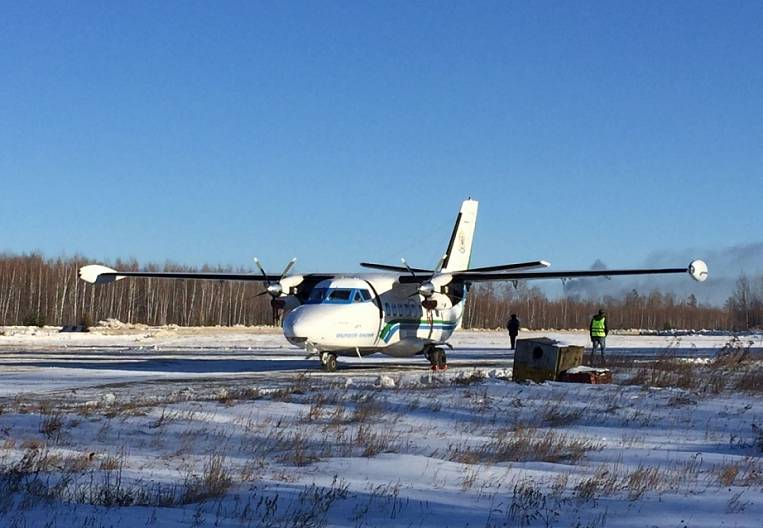 High prices for air transportation have long become a reality for the northern territories, which limits the opportunities not only for local residents, but also for the airline business. According to the head of the Association of Small Aviation of Yakutia, Ivan Lukin, now it is mainly business travelers and beneficiaries who fly inside the republic, who actually do not care about the existing ticket price. However, airlines are aiming to reach a broader population.

“The profit of the airline begins when more than 75% of the passenger seats of the aircraft are filled. But for this it is necessary that the prime cost of the air carrier's flight be lower than the purchasing power of the passenger on whom he is counting, ”explains Ivan Lukin.

The high cost of aviation services (for example, the cost of one hour of flight on a Mi-8 helicopter is 300-400 thousand rubles) scares off many tourists, says Vyacheslav Shadrin, vice-president of the republican Association of Indigenous Minorities of the North.

“Back in the 1990s, especially in the north-eastern part of Yakutia, fishing tourism was quite developed. Including foreign tourists came to hunt moose, fishing on mountain rivers. But over the past decades, this direction has curtailed, such visits have become rare. The main reason is the high cost of transport services. If this type of tourism developed, perhaps this would ensure the expansion of the aviation network, the development of small business and related infrastructure, "Vyacheslav Shadrin believes.

The leadership of Yakutia notes that the current prices for air tickets are formed mainly from the high cost of fuel supply, service at the northern airports, as well as the costs incurred by airlines to maintain the airworthiness of their fleets. The regional authorities, as part of the creation of an alliance of Far Eastern airlines, propose to make a single price for aviation fuel throughout the Far East, with the exception of large air hubs, where the price for it is quite competitive.

“So that regardless of where we refueled - in Yakutsk, Chokurdakh, in Chukotka Pevek or Khabarovsk Ayan - the price of fuel was the same and comparable to the price of fuel from the Angarsk refinery plus 1%. And transportation costs for the delivery of aviation fuel to airports should be included in the subsidy and compensated for by the constituent entities of the Russian Federation, ”said the head of Yakutia, Aisen Nikolayev, in a recent interview.

He also added that it would be prudent to transfer state-owned enterprises that serve remote airports to maintenance according to the estimate and zero the costs of taking off and landing aircraft there. According to the head of the republic, this would remove about 15-20% of the current cost of air tickets.

The government of the Kamchatka Territory is also in favor of reducing the cost of transportation by optimizing airport taxes. They propose to simplify the requirements for the runways of small airfields that ensure the performance of socially significant flights (now the FKP Kamchatka Airports includes 12 small airports and seven landing sites). The question of exactly what requirements for the runway can be removed in order to ultimately reduce the cost of passenger transportation is planned to be considered in October at a meeting chaired by Deputy Prime Minister - Plenipotentiary President in the Far Eastern Federal District Yuri Trutnev.

Experts also point to the need to ease the requirements for carriers, especially for small aircraft. The corresponding changes are proposed to be introduced into the Air Code of the Russian Federation and the Federal Aviation Rules. This was announced by the Deputy Head of the Department of Strategic Planning and Project Management of the Ministry for the Development of the Arctic and the Affairs of the Peoples of the North of the Sakha Republic Raymond Popov at the II Northern Forum on Sustainable Development. The amendments, he said, were prepared with the participation of municipalities, including those located in the Arctic regions.

The role of small aircraft in the transport connection of the northern territories (in the regions of the Russian Arctic, there are 32 airlines that operate 469 aircraft units) is difficult to overestimate, especially when it is not cheap to build ground infrastructure. For example, the construction of one km of a fourth category dirt road in Yakutia is currently estimated at 30 million rubles.

Unfortunately, says Ivan Lukin, the current Federal Aviation Rules block the creation of new airlines, and hence the development of competition. The reason for this state of affairs is the high cost of entering the market and bureaucratic imperfections. According to the current rules, the carrier must have at least three aircraft. For example, three old An-2 aircraft will cost about 20 million rubles. At the same time, the airline should have approximately 60-80 million rubles in its bank account to ensure operational activities within three months.

“It is difficult to buy equipment. An entrepreneur can afford some An-2 for six to seven million rubles - that's all. More serious imported equipment (if you take a three-seater Cessna 182, produced in 1997, with a residual resource it costs 25 million rubles) can only be leased, ”explains the head of the Small Aviation Association of Yakutia.

But even here everything is not easy. An aircraft operator certificate is required to enter into an agreement with a lessor. In turn, the Federal Air Transport Agency will require a signed leasing agreement from the newly created enterprise to issue it.

“It turns out a vicious circle or flight in a circle. For the solution, changes are needed, according to which the applicant can have a contract with a postponed entry into force, that is, when the contract with the lessor comes into force after receiving the operator's certificate from the Federal Air Transport Agency, ”says Ivan Lukin.

Another problem is that in the next 15 years Russia is not going to build a small passenger fleet. Now we are working on the creation of the TVS-2DTS Baikal aircraft, which will be assembled at the Ulan-Ude Aviation Plant (part of the Russian Helicopters holding).

In April 2018, a prototype was shown. The functionality of "Baikal" is wide - it is planned to use it to provide emergency medical care, extinguish forest fires, perform agricultural work and, of course, organize passenger transportation. At the same time, the estimated capacity of this aircraft is 14 passengers, while on the airlines in the Arctic and the Far East, where the passenger traffic is quite low, equipment with a capacity of up to five people, excluding the crew, and a maximum take-off weight of up to two to three tons can successfully operate. It is done abroad. For example, Cessna produces aircraft with 1-3-5-9-12 passenger seats, and regional companies can operate with such a set of fleets, depending on the demand for air routes. In this regard, it is advisable to zero customs duties on the import of such aircraft into Russia.

“The meaning of this customs duty has no logic. Because until 2035 the Ministry of Industry and Trade does not plan to release this type of equipment, ”notes Ivan Lukin.

Another help could be the revision of some provisions of the order No. 241 of the Ministry of Transport dated July 17, 2012 "On airport and air navigation charges". For small aircraft, this document provides a reduction factor.

“But for some reason it applies only to takeoff and landing and aviation security. And there are no benefits for parking, passenger and cargo service, gas station, and airport services. It would lead to a significant decrease in airport taxes, "- emphasizes the head of the Association of Small Aviation of Yakutia.

While there are no decisions on the part of the authorities, air carriers are trying to make their services more accessible by resorting to alternative options. For example, Polar Airlines offers customers unmanned aerial vehicles (UAVs) for monitoring, for example, flood conditions. The cost of a flight hour with the use of a UAV is much less than with the participation of a manned vessel - about 25 thousand rubles.

For the development of small aircraft in remote areas, it is advisable to use seaplanes, says the first deputy head of the Nizhnekolymsky region of Yakutia, Ivan Negnurov. As the experience of operating such equipment in North America shows, the widespread use of hydroplanes would allow partly to avoid costs.

“I spoke with a representative of Air Navigation (FSUE State ATM Corporation), FKP Airports of the North, if we use an aircraft in our area that will land on the water surface, then this does not require special airport, air navigation fees. All that is needed is a notification that from point A to point B the board flies out at such and such a time, - the official says. "For example, in Alaska, seaplanes have their own berth, they fly regularly and the price of flights there is affordable."

In turn, the Ministry of Transport offers to subsidize regional air travel, including in the Arctic and the Far East. In 2021-2023, more than 12,5 billion rubles can be allocated for these purposes. The department sent a corresponding proposal to the Russian government. In particular, in 2021 it is planned to allocate 4,6 billion rubles, and in 2022 and 2023 - four billion rubles each.

“We also came up with a proposal to provide subsidies for the development of flights within the region. Now these subsidies are provided only from the budget of the constituent entity of the Russian Federation, we ask that the money be allocated by the federal center. This will help to significantly increase the air mobility of the population living in the Arctic regions, ”said Russian First Deputy Transport Minister Alexander Neradko at the II Northern Forum on Sustainable Development.