Maxim Talyuk: "Every product is special"

In the one and a half years that have elapsed since Mail Bank came to the Far East, more than five hundred points of its presence have appeared in the region, some of which are located in such remote areas where there are simply no other financial institutions. As promised by the director of the macro-region “Far East” Pochta Bank Maxim Talyuk, by the end of the year the credit institution will be represented in 700 points. 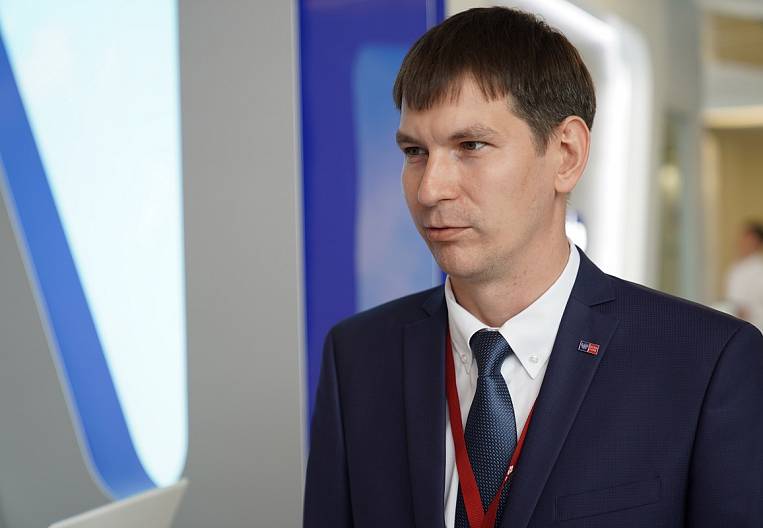 - Conducting banking business in the Far East is specific because of a small number of people, and, accordingly, a modest customer base. Many banks tried to work in remote areas, but almost all of them eventually left. How did you manage to open so many points of presence?

- We are developing using three basic formats. The first is our flagship client center. We place them on the central streets of major cities, where customers can get the full range of financial services, including transferring biometric data, in order to be able to use the products of the bank remotely in the future.

The bank implements the two most common formats of presence in postal offices. Here, Mail Bank is represented by client centers, which are equipped with ATMs, where services are provided by bank employees, and citizen services windows, where the basic set of financial services is provided by employees of Russian Post - bank agents. At the same time, the windows are equipped with terminals with which you can replenish a bank card or withdraw cash from it, as well as pay for any postal service using, including contactless technologies. Having our card and installing a mobile bank, a person can, without leaving home, perform almost any operations - from paying utility bills to international transfers.

- What are the most distant points on the Far Eastern Bank Post card?

- For example, the city of Mirny in Yakutia, the village of Kavalerovo in Primorye, or the Ayano-May district in the Khabarovsk Territory, which can only be reached by plane, which also does not fly every day. For example, in August, our employees went to Ayan on a business trip to issue cards to employees as part of payroll projects. And what do you think - the flight was transferred 3 times, they could fly away only in September.

There are after all settlements where there are no ATMs at all, and people have cards. Do you know how they get out? They “send” one person, give him all the cards with pin codes, he withdraws money or carries out other operations. This is wrong, inconvenient and dangerous! Opening in such a village, we first of all tell people what banking security is.

For a year and a half we had a major expansion, but we are not going to stop. We are currently negotiating and signing road maps with the administrations of the subjects of the Far East. The authorities mark the main problem areas, we consider them and bring them into our program.

Recently, by the way, another format was presented - a bank representation in the MFC. We are currently negotiating with regional authorities to open such points in the MFC.

- What regions are willing to cooperate with? Who is harder to negotiate with?

- Everything is open for cooperation, but the “road map” is a large document that goes through several stages of coordination. With someone it can be done faster, with someone - a little longer. We have signed a “roadmap” with the government of the Khabarovsk Territory, with the Ministry of Communications and Information Technologies of the Republic of Sakha (Yakutia). On approval - with the Primorsky Territory.
In Primorye, we declared our desire to participate in the project proposed by the regional administration for the release of the Primorets social card. Now its design is being developed, for our part, we are analyzing what we can offer.

- People who need social protection and state aid, your clients?

- All Far Easterners, from schoolchildren to pensioners, are our clients. But we have a special offer for clients who receive a pension on Mir cards: accrual of up to 6% on the account balance, cashback up to 3% in the categories “pharmacies”, “transport”, “gas stations”, special interest rates on loans and deposits. The issue and maintenance of the card is free.

For example, for pensioners there is a free line of care service. A very interesting product that other banks do not provide. Our client can call a toll-free line around the clock, get advice on legal or medical issues, and psychological assistance. By the way, most often people ask how to get a subsidy. I note that, despite the fact that this service was launched quite recently, we already receive numerous positive reviews about our “line of care”.

For schoolchildren and their parents, we have developed a mobile application "Mail Bank Junior". The child’s card is attached to the parents ’account so that they can control their expenses. This is important for the education of financial literacy of the child.

- What is the benefit of the bank?

- By acquainting children with the basics of handling money, we not only solve the problem of increasing their financial literacy and socialization, but also expand our customer base and grow our future customers. Today, they only open a card, transfer funds or make small purchases, and tomorrow they will open deposits, take loans and so on. At the same time, loyalty, financial literacy, and transactional activity among such clients are much higher.

HECTAR AND NOT ONLY

- What do you offer to legal entities? Perhaps there are only Far Eastern products?

- Entrepreneurs have long been accustomed to, that in order to issue an account, they need to come to the bank with a pile of documents, to defend their turn ... Managers will come to the Post Bank clients themselves. For the regions of the Far East, given the remoteness of the territories, this is very important.

Also, entrepreneurs have a demand for self-collection service - depositing revenue through a wide network of ATMs of the Bank Post without a commission at any convenient time.

We are still not lending to legal entities, but the bank plans to launch a special line for them, an overdraft option is being considered. In addition, by the end of the year, our plans include the launch of acquiring.

- How are things going with the program of concessional lending for the Far Eastern hectare? Is this product in demand? Was the execution of the program influenced by the fact that in March FEDV took from the Post Bank a deposit of 3 billion rubles intended for the implementation of the program?

- This money was placed on the account under certain conditions, executed completely and on time. Upon the expiration of the term, according to the contract, the funds were returned, but the bank continued to work on the program. Moreover, we increased the loan amount to a million rubles, connected new partners - companies engaged in housing construction. We are in constant dialogue with ministries to expand the program with additional opportunities.

I have been at several meetings with the owners of the plots: someone has organized a beekeeping farm, someone is thinking about animal husbandry, there are those who are looking for like-minded people and those who do not yet know exactly what they will be doing. The process is still at the very beginning, and most often people come to us in order to find out the terms of lending, to understand their capabilities. Most of the money is taken to build houses. But we see consumer interest and a gradual increase in demand.

- Recently, Mail Bank announced that it began to use voice biometrics in the contact center for client authentication. What other technological innovations are being introduced and applied in the bank?

- Three-dimensional "cast of the face" we have been doing for a long time. All these innovations are introduced primarily to ensure maximum security of customers' funds. The use of modern technology has already saved them more than 3 billion rubles. Prevented several tens of thousands of potentially fraudulent activities.

Indeed, we are one of the pioneers of the introduction of biometrics. With voice biometrics, the voice recording of the client is made during the first call to the call center. In the future, the system correctly identifies the client, and it does not require additional confirmation in the form of code words, passwords.

If we talk about other technological innovations, then Post Bank actively uses such a sales tool as "event marketing" - real-time marketing.

The RTM system instantly segments the client, analyzes its credit profile, current products, interests, needs and many other factors and on this basis forms an individual offer for the client. At the same time, the whole process - from a request in RTM to showing the offer to the client and sending push and sms notifications - takes 5-10 seconds.
Tags: bank finance credit calculations Far East