Who are the Far Easterners? 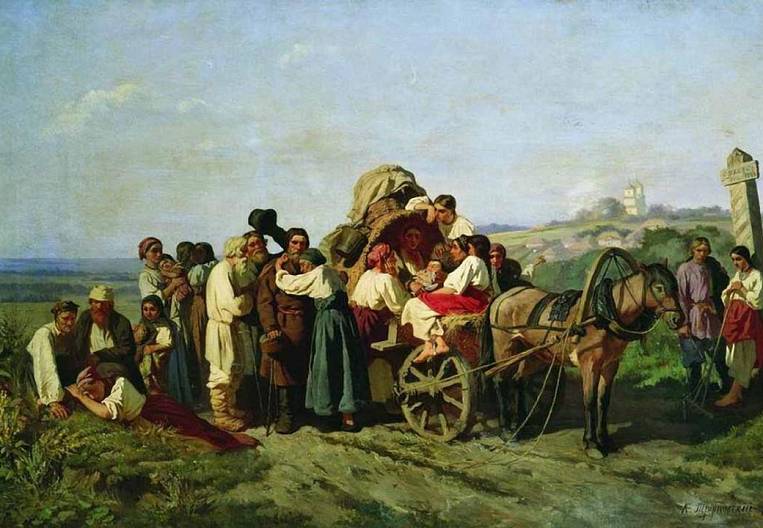 Photo: K.A. Trutovsky, The settlers from the Kursk province

About S.I. Furgal Say a Word New conditions for new governors What can the Far East
All author's materials
It seems that the answer to the question made in the headline is understandable and natural. Who are the Far Easterners? People who permanently reside on the territory of the Russian Far East or, in official terms, on the territory of the subjects of the Federation that are members of the Far Eastern Federal District. The district is more than 6 million square kilometers or 36% of the country's territory. But the people live there only 6,3 million people. Here comes the question. And is there anything in common among people, smeared in space, stretching from north to south for 4,5 thousand kilometers and 3 thousand kilometers from west to east?

In the north of the region, the tundra, permafrost, and in the south ripens grapes and watermelons. And the population in the region is spread extremely unevenly. Its main part is concentrated on a narrow strip along the Far Eastern Railway (the eastern section of Transsib), along the banks of the Amur and Ussuri, in the lower reaches of Zeya and Bureya. Here, for less than 10% of the territory of the region, 70% of the population live whiter. In these places the road network is more or less developed, there are the largest urban agglomerations, social infrastructure, hospitality industry, etc. In other parts of the gigantic Far East, all this occurs sporadically.

No less difficult is the situation with the notion of "permanently residing population". Constantly - this is how much? In many cities and towns of our country and generations there is not enough to become "our own". In the Russian Far East, this is easier. According to polls conducted by the author in the middle of the 90-ies, only one in five respondents could boast of two generations of ancestors-Far Easterners. Most of the respondents were born outside the region. They came to great construction sites, attracted by regional premiums to wages, relative ease in obtaining housing, "booking" apartments at their former residence. Someone, having worked (or not having worked), put it back. Someone was staying. Of these, the Far East were also obtained. Simply, at some point the person started to talk (and think): "They, in the west, and we have - in the east", cook the thal (frozen fish stroganina) and fern, fish and hunt, began to build their lives without hurrying and for ages. The main thing - he learned to negotiate with people. With all.

True, today the situation has changed somewhat. The number of "not very radical" Far Easterners decreased due to departure. But the essence remains: most of the population lives here not so long ago. And it began not at the time of the Soviet power, but much earlier. Probably not since the development of this land by the Russian state. In the region constantly flowed some people, and just as constantly flowed away.

Almost the entire XVII century, the land beyond Lake Baikal was a space of Cossack freemen. Yes, the tsarist governors and clerks were appointed from the capital. Only they ruled according to the highest command, "as the Lord will teach." Simply put, the laws were here, but only those about which people between themselves will agree. Sends the state of the peasants peasants to plow the "sovereign's arable land". And the Cossacks "turned" in their circle. The circle decided: to plow only on yourself. There are no peasants here. Again, around the freeman.

In the next century, the situation begins to change. Cossack freedom is replaced by "chimes of the chains". In the region, silver, lead, cinnabar, copper and other valuable metals were discovered. Have built factories. Only local people did not show a special desire to work for them. Taiga feeds, the saber protects. That's driving the state to the east of the kundalnik and the serfs, who now become "attributive" (attributed to the factories). Someone is running, replenishing the ranks of freemen - hunters, fishermen, fishermen of all sorts - who fell at that time from the orbit of the "sovereign's eye" (reports voivod, governor-general). But most of it lives heavily in factories, under the Kamchatka expedition and other state enterprises. All this activity is monstrously expensive, since there are too many people for the weak agricultural base of the region. Food, "good iron" and much more comes from far away. But the state is mastering new "empty lands" with perseverance.

With the abolition of serfdom, the weakening of the state in the middle of the XIX century, a rapid outflow of population begins. By the way, it is much more tangible than now. If in the post-Soviet years the region left 22% of the population, then in that period - more than half. The rest have adapted, replenishing the ranks of the Far East, which at that time was called Amur and Primorye. Moreover, the whole situation soon changed. Huge and fertile land, which went to Russia according to the Treaty of Aygun, had to be populated by someone. The cash population simply was not enough. Then a unique attempt was made to create a Russian region beyond Lake Baikal.

For the immigrants, unprecedented benefits were developed: the allocation of 100 acres of free land per family, exemption from taxes, exemption from recruitment, preferential tariffs for transport, etc. And the people stretched to the east. Not that very massively. Still, going to the uninhabited and distant land was scary. However, this was quite enough for the region. During the second half of the 19th century, the population of the region increased more than fourfold.

Peasants in the new, free lands got rich. Merchants and industrialists left them. Established factories and mines, created trading empires, international joint-stock companies. More than 10% of the population of the region were foreigners who accepted Russian citizenship. They did not go "empty", with their capital, goods and inventions. For the Far Eastern peasant, American and German agricultural machinery were commonplace as early as the beginning of the 20th century.

With laws, with "order" in its bureaucratic sense, then, too, was not all well. The contract, the word meant much more. All attempts to "put things in order" were extinguished by the local community rather harshly. It's not that they were especially criminal, although there were plenty of dashing people among the rich. Just order, convenient for people, here already was. The other is not necessary. His first Soviet leader, Jan Gamarnik, described the people of the region as best: "The people here are cheesy. There is no one to lean on. There are almost no poor people. " That's why it was not that people built life for themselves, agreed, step by step settled. They did not chase themselves to become "Europeans". Just lived. But ... the Soviet power happened.