Creative deposits of the Far East

The Far East has a unique potential for the development of creative industries.

Participants of the plenary session "Creative Industries for Economic Breakthrough: Regional Experience", held on the first day of the Eastern Economic Forum in Vladivostok, agreed that the creative sector in the coming decade will become one of the main drivers of economic development in the regions of the Far East. 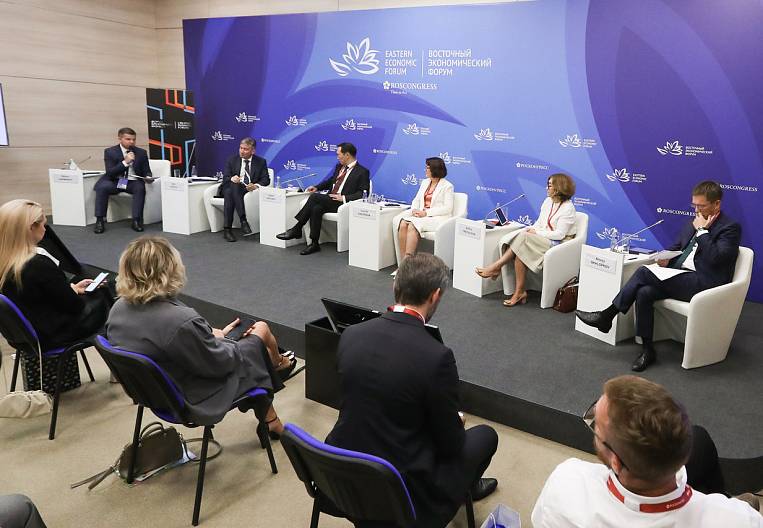 The event was attended by Deputy Minister of Industry and Trade of the Russian Federation Gulnaz Kadyrova, Head of the Republic of Sakha (Yakutia) Aisen Nikolaev, General Director of the Corporation for the Development of the Far East and the Arctic Igor Nosov, First Deputy Governor of the Khanty-Mansiysk Autonomous Okrug - Ugra Alexey Okhlopkov, Zelfira Tregulova, General Director of the All-Russian Museum Association “State Tretyakov Gallery”. The discussion was moderated by Roman Karmanov, General Director of the Presidential Fund for Cultural Initiatives.

Traditionally, it is customary to include projects related to human intellectual activity in the sphere of the creative economy: from software development, augmented reality products and games to cinematography, design, advertising and other areas. In fact, creative industries are developing in close connection with other sectors of the economy, while at the same time they form the socio-cultural environment, create conditions for the motivation and development of young teams, and reveal the development potential of territories.

The close focus on creative industries market research is a relatively new trend. In Russia, the first assessment of its impact on the economy at the end of 2020 was published by the Center for Urban Competencies of the ASI (CGK ASI). According to the collected data (the study used statistics from 2019), up to 750 thousand companies are employed in the country's creative industries with revenues of about 11 trillion rubles per year (4,21% of GRP). What is important, in comparison with other sectors of the economy, the studied market segment turned out to be not only more resistant to the economic downturn during the pandemic, but also more rapidly growing.

The growing role of creative industries in the economy was also noted by Gulnaz Kadyrova. According to statistics, most of the participants in this market are free artists with no legal status. Thus, the development potential of the segment is enormous.

“The structure of the economy of creative industries is mainly small and medium-sized businesses. About 3% are organized legal entities and individual entrepreneurs, and 97% are self-employed. It is very important for these people, artists, creative people, to help brand, promote and sell their products. We are deeply convinced that this stimulates the development of the region, the development of tourism, ”said Gulnaz Kadyrova. The activity of the Ministry of Industry and Trade of the Russian Federation, according to the expert, today is aimed at the formation of programs that will allow targeted support of people employed in the field of creative industries.

The head of Yakutia A.S. Nikolaev also spoke about the successful experience of interaction with teams engaged in the creative economy. An IT park has been operating on the territory of the Republic since 2018, regional teams have created several companies (for example, InDriver and MyTona), which are successfully operating on the world market, and Yakut cinema regularly claims awards at international festivals. According to Aisen Nikolaev, few years ago, few believed in the prospects for the development of the same film industry. At the same time, the secret of success lies in competent goal-setting and a systematic approach to supporting the industry; in the formation of a comfortable environment for the local population - young teams that have high development potential.

“The secret of Yakutia's success lies in the fact that we began to systematically engage in the development of creative industries much earlier than other regions of the country. Since 2012, being the head of the city of Yakutsk, I have contributed to the development of such industries as cinema, IT-industry, fashion design, architectural bureaus. Many people were skeptical about this then, ”noted Aisen Nikolaev.

By 2035, according to the head of the Republic of Sakha (Yakutia), the share of creative industries in the region's GRP structure will reach 5%. “I am convinced that creative industries are very important for Yakutia. When I became the head of the republic, I set the task to measure the volume of this sector. We understood where we are and what we need to do. Yakutia became the first region in the country where a concept for the development of creative industries for the period up to 2025 was signed ... According to the methodology for calculating the creative industry proposed by ASI in 2020, today in the Republic of Sakha 42 thousand people are employed in this area. This is 8,2% of the total employed. We believe that by 2035 the number of jobs should reach 95 thousand people, ”summed up Aisen Nikolaev.

Roman Karmanov confirmed the words of the head of Yakutia about the explosive growth of the direction of creative industries on the territory of the Republic. According to Karmanov, Yakutia is one of the leaders among the applications for grants received this year by the Presidential Fund for Cultural Initiatives. In total, more than 300 applications were submitted from Yakutia. Roman Karmanov also noted the importance of developing the urban environment. In his opinion, the most important event for Vladivostok was the opening of a branch of the Tretyakov Gallery in the city and the implementation of temporary interactive exhibitions by the museum in the city center. “Many residents of the region travel outside its borders only at a conscious age and can get the opportunity to personally come and look at great paintings. Such projects are a great joy and a great achievement for the city. "

Zelfira Tregulova noted that the Tretyakov Gallery in Vladivostok is shaping a new approach to museum activities, trying not so much to promote classical art as to create multifunctional sites and implement interactive projects aimed at developing the spiritual component of the region's life. “We understand that Vladivostok is a place of power and a place of incredible potential. But what is missing here is a real large-scale modern museum. Therefore, a landmark decision was V.V. Putin's order to create a new, multifunctional cultural center in Vladivostok instead of previous attempts to create a branch in some historical buildings in Vladivostok , - stressed Tregulova.

The panellists agreed that the development of creative industries requires much less infrastructure investment than the implementation of large industrial projects. At the same time, creative industries show a much faster effect and are directly related to improving the quality of life of the local population. With due attention, the creative sector will become one of the important factors in reducing the demographic outflow from the Far East, experts say.