Krabalova "from scratch" built in Primorye 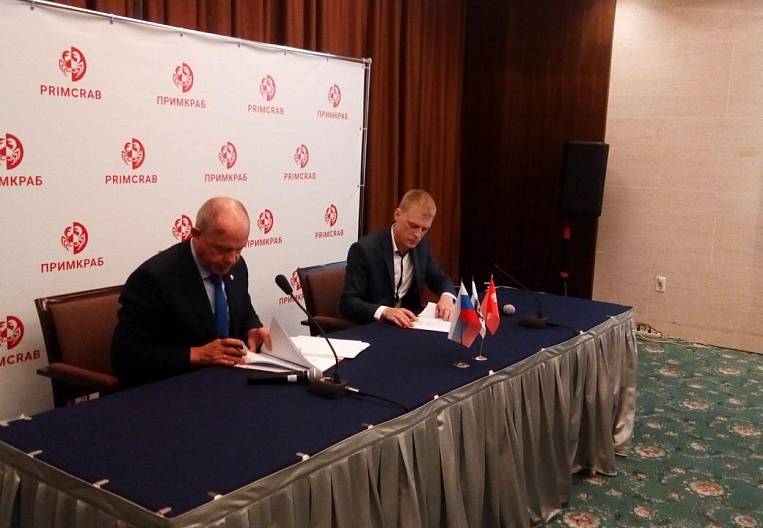 On Sunday, 8 July representatives of the companies LLC "Primkrab" and St. Petersburg "Nautic Rus" signed an agreement on the development of a draft design of a crab ship. From that day, the project bureau should execute the development within two months, then, after approval of the project, a decision will be made on detailed design.

As noted during the signing of the agreement, General Director of LLC "PrimKrab" Alexander Kirichenko, new crab courts in Russia did not create about 30 years. Moreover, specialized vessels for mining and processing crabs have not previously been designed and built from scratch in Russia or in the world. Until now, such capacities were created by the conversion of fishing vessels of other types.

"The steamships, which are currently in the field (six of them), allow us to develop the resource, but they are yesterday, they were converted and are not safe for the fishermen," Kirichenko said. - Therefore, the company came to the unanimous conclusion that it is necessary to change the fleet. The new "crab" will not be analog, but digital, on microprocessor technology, "he added. - It will provide all the processes - from mining to processing crab. On the upper deck, processing will not be conducted, again, because it is dangerous, especially in the winter and, as is known, can lead to tragedies.

The cost of the first ship together with the project is in the region of 27-30 million rubles, East Russia reported. However, further, the more ships in this series will be ordered, the cheaper the production will be - each subsequent construction will become cheaper by about 7-8%. PrimKrab LLC plans to complete the construction of the first crab truck within two years. The company would like to see the construction carried out at the facilities of the Far Eastern shipyards. They will be invited to participate in the tender, which is scheduled to be announced approximately in nine months. Further, the company will be able to produce one vessel per year.

“The engineers have many years of experience in the design of fishing vessels, as well as in the development of projects for their re-equipment for catching crab,” said Stropilov. - The concept of a new vessel is already in place. It brings together the most modern design and engineering solutions, energy efficient technologies. At the same time, great attention is paid to increased safety and comfort of the crew.

By the way, according to Kirichenko, there are no problems with the staff deficit in the company today.

“There are more people in the queue, because, as we know, crab products are the most marginal products of the fishery,” noted Kirichenko. - We are completely transparent in terms of personnel policy, we pay on time, including to the pension fund, we do not have double salaries.

According to him, fishermen on the crab fishery earn today from 150 thousand rubles a month. The main object of fishing in the Primorsky region is the crab of Opilio, Blue and Volosatik. Over the past year, the company has mastered about 600 tons of these resources. A new crab will provide a daily crab catch of 10-15 tons. At the same time, at the same time, about 20 tons of crab ice cream and 120 tons of live can be delivered to the shore. In addition to the domestic market, the main players on the external market are China and Korea. Japan, according to Kirichenko, can not afford the level of prices of China and Korea. In terms of sales, this is the most sluggish market.
Tags: shipbuilding fishing crab Primorye