The cosmodrome opens the doors

To make a selfie with a real cosmonaut's suit, to touch the capsule of the "Union" and to see a huge cosmodrome can any tourists. In the Amur region due to travel to the East they expect to significantly increase the tourist flow. And the guests of Priamurye have something to see. 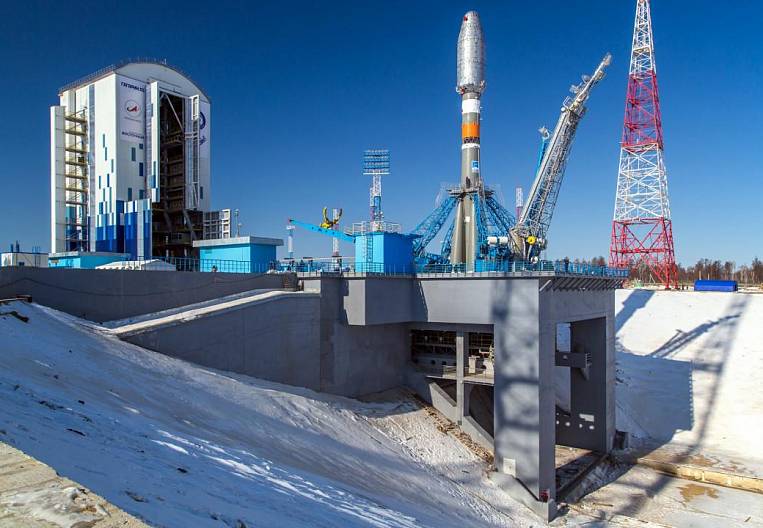 The creation of the first civilian Russian spaceport Vostochny was a step towards the reform of the country's space industry. Our own platform, from which space vehicles can be launched to any orbit and implement manned programs, will allow Russia to become a significant partner in international projects.

The cosmodrome was built in the Far East - in the Amur Region, so they did not think about the name for a long time. The first launch took place on April 28, 2016. Then the launched Soyuz-2.1a launch vehicle launched the Lomonosov and Aist-2D scientific and educational satellites into near-earth orbit, as well as the SamSat-218 student nanosatellite. However, the launch was supposed to happen a day earlier. It was postponed due to the fact that the automation gave a refusal. The days before the repeated actions became the most stressful in the lives of hundreds of people who built Vostochny, developed and assembled a rocket, and prepared it for launch. The specialists were given only 12 hours to find the causes of the failure and eliminate them. Found, fixed - the launch was successful. Already at the end of 2017 and the beginning of 2018, two more launches took place.

The area of ​​the cosmodrome is about 700 square. km. From the southwest to the northeast it stretches for 18 km, and from the southeast to the northwest - to 36 km. The routes of missile launches from the East pass over the water and sparsely populated areas. This is done for the added safety of residents. But there is a necessary infrastructure nearby: the Baikal-Amur Mainline, the Chita-Khabarovsk highway, the seaports are relatively nearby, and there is a large supply of electricity produced in the region.

Several important objects are located on the territory of the cosmodrome. The first of them is a technical complex. There the launch vehicles are prepared for launch and run. The complex is huge, it includes 121 construction, the total area of ​​which is 170 thousand square meters. meters. At 42-hectares are located facilities, engineering networks and transport communications. 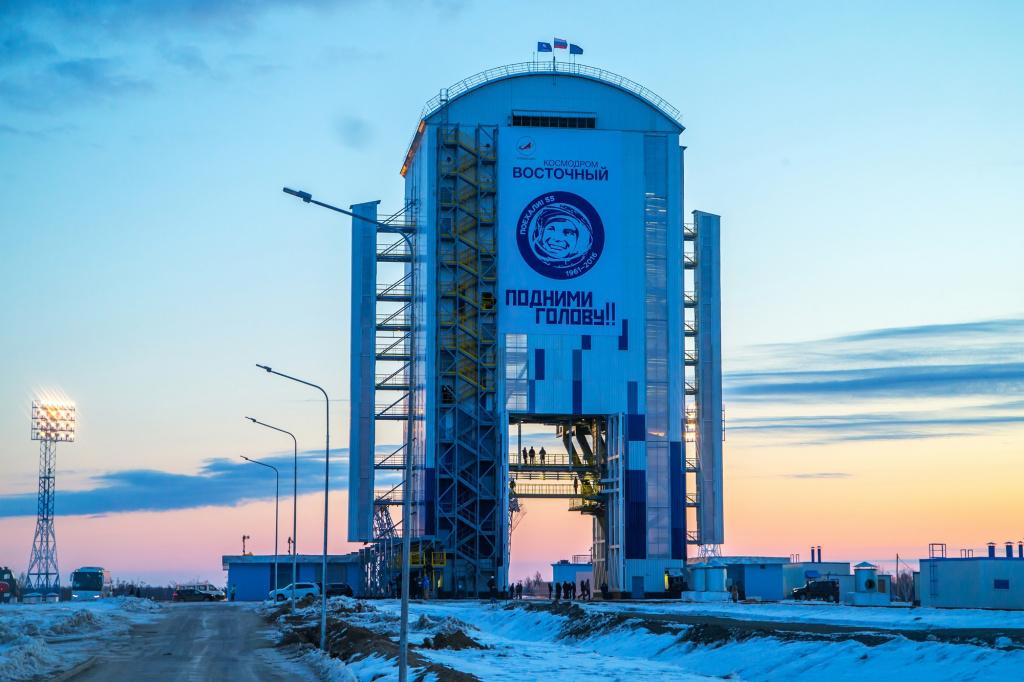 All stages of rockets and head fairings, which come from the manufacturing plants, are stored in the storage of blocks. The building consists of two one-storey production units and an annex with different rooms. In winter, the heat tower warms the railway cars before receiving and unloading. This is very important in the Far Eastern climatic conditions.

The assembly parts are sent through the main highway East - a special trans-board gallery. It also transports the components of carrier rockets and space vehicles, forward necessary equipment. In the assembly and testing building, which occupies almost 45 thousand square meters. m., place technological equipment. The room is supported by a certain mode of temperature and humidity. Once the launch vehicle is assembled and ready for launch, it is delivered to the launch pad. This is the heart of the cosmodrome. It consists of 83 structures and occupies an area of ​​45 thousand square meters. m.

On the East there is a mobile seven-seater service tower of a closed type unique for Russia. It weighs 1 600 tons, and is stretched to the height of 52 m. There are no similar equipment at the cosmodromes of Plesetsk and Baikonur. The tower allows you to prepare a rocket for launch in the most difficult climatic conditions. It uses a unique technology of fastening and holding the rocket: it hangs on the upper power belt, and does not stand, as usual. Then the tower "hits" the starting system with a rocket and clasps it, and the combat crew begins the final preparation. Manage launches and control them in the administrative and business complex, and at the command post, which can withstand the impact of any force, ensure the operation of all systems of the East. Despite the fact that the launch is completely controlled by electronics, the staff of the cosmodrome perform a rite obligatory for them - bypassing the rocket counter-clockwise, so that everything goes well. Do not violate this tradition, even at the will or order of high authorities.

In addition to these facilities, there is a repair and mechanical plant, a warehouse, a road office, a checkpoint and an administrative building with a canteen on the territory of the cosmodrome. 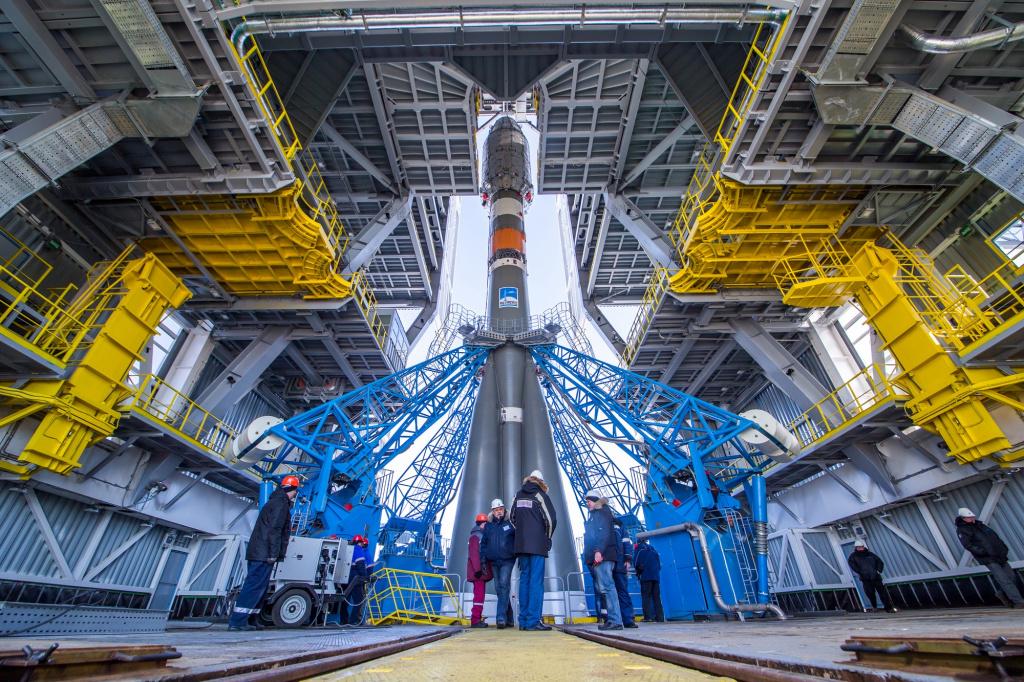 At the East we welcome everyone

Now the cosmodrome can be visited by tourists. For them, organized special tours from Blagoveshchensk. The doors of the East are also open for foreign citizens.

- Our tour companies have developed tours to the cosmodrome, there are tour operators who have agreements with the Center for the Operation of Ground-Based Space Infrastructure Facilities. Representatives of Roskosmos state corporation came to visit us, there were representatives of ZENCI this year. With the government of the region, they discussed the organization of tourism at the cosmodrome, a tripartite agreement was signed. Travel agencies carry groups, mostly they are school and student. However, we will continue to work in this direction, since interest in the East is very large both for Russian and foreign tourists, "said Elvira Samarina, head of the tourism department of the Ministry of Foreign Economic Relations, Tourism and Entrepreneurship of the Amur Region. 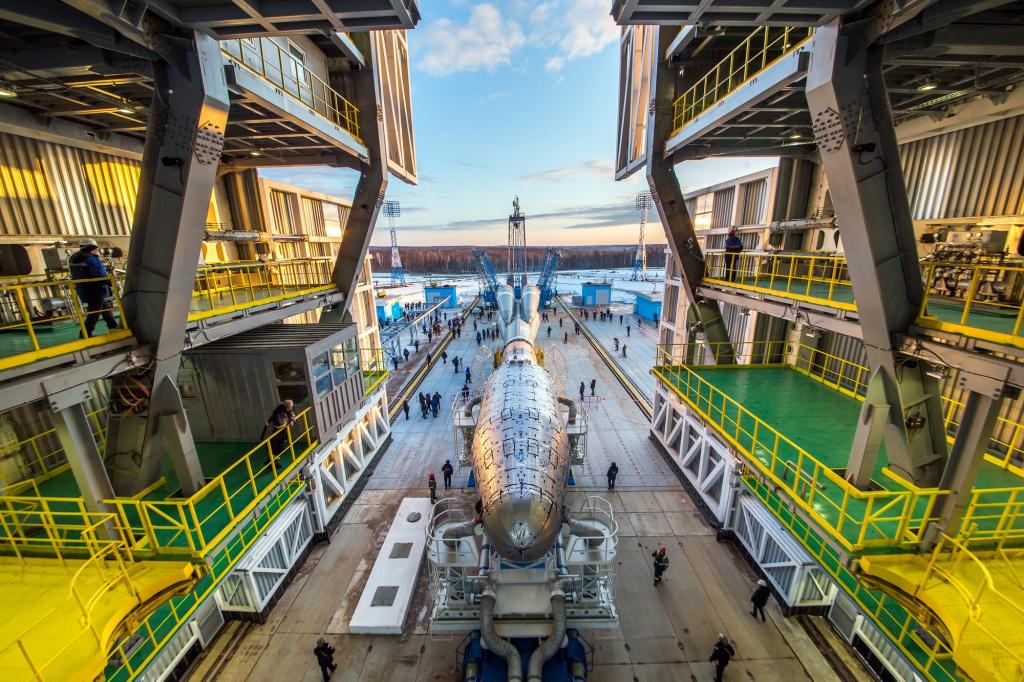 While there are not many tourists at the cosmodrome, the price frightens off. The closer the trip is to the next launch, the more expensive the visit. For a foreign tourist who came to the Amur Region for several days, a trip to the cosmodrome can become a problem: since Vostochny is a secure facility, the passage to it must be coordinated with special services, the procedure for foreigners takes more than a month. If the desire to get to Vostochny is very big, you should take care of permission in advance.

Cinema and the Union for guests

Now for local residents, a tour from Blagoveshchensk to the Vostochny cosmodrome costs a minimum of 1 700 rubles per one, if there are at least 30 people in the group. If the object wants to see the guests of the area and there are less than 30-ti, the cost will be higher. The price includes an almost four-hour bus ride from Blagoveshchensk to the cosmodrome, an excursion to the Cosmonautics Museum in Uglegorsk - a military town, which became the site for the new "space" city of Tsiolkovsky, a film about how missiles are delivered and launched, lunch in the "space "Cafe and tour of the objects of the East.

- The excursion includes a walk around the city of Tsiolkovsky, an inspection of the Soyuz TMA-07M capsule, in which Roman Romanenko landed, a survey of "space" clothes and food, monuments to astronauts and builders of the East, and a survey of the surroundings of the cosmodrome. With tourists there are two guides: our and the cosmodrome. The price for visiting the East is established by the cosmodrome, therefore its visit can be more expensive, especially on the days of launches, - explained the manager of the travel agency Ekaterinburg Yuryeva. 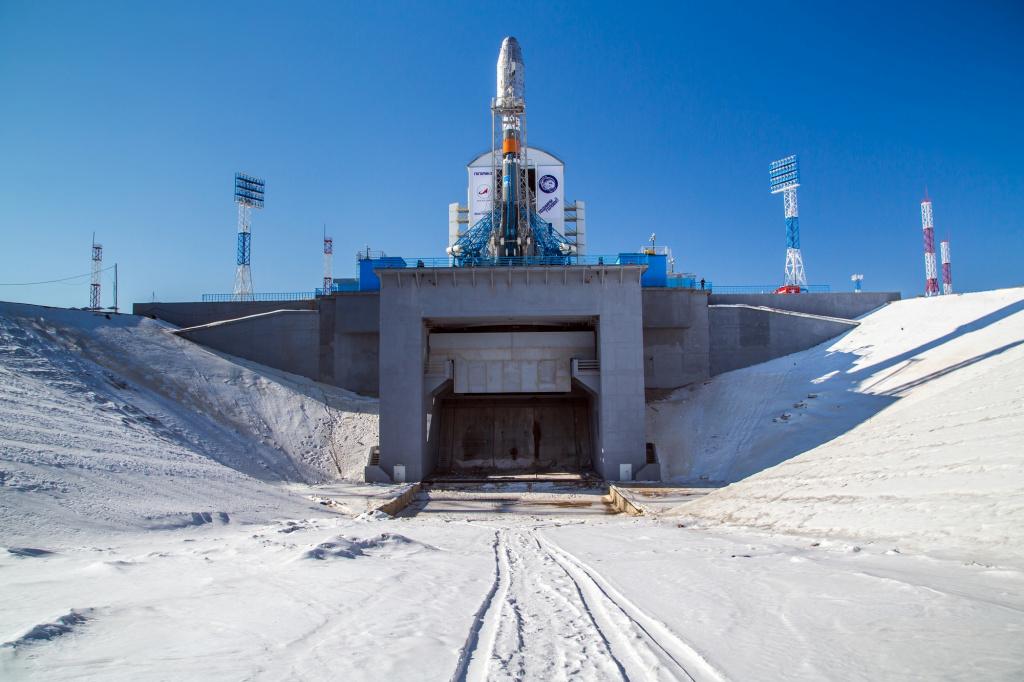 Selfie with a spacesuit

The museum begins, where the original exhibits are collected, from the history of the military unit of Uglegorka and the Soviet cosmodrome, which was located nearby, but was unnecessary after five launches.

The museum of cosmonautics presents a piece of land from Baikonur, buckwheat porridge bags and canned cans for ship's meals, models of launched spacecraft and tracking stations, cosmonaut Gennady Padalka's spacesuit, and Romanenko Romanaenko's training, heat-shielding and hydroplating suits and his parachute. The cosmonaut personally transferred these things to the museum. After the first launch from the East in the museum a new hall was opened. There you can see the parts of the rocket that detached from the orbit. Many of the exhibits are not hidden under the glass, they are allowed to touch and do on their background selfies.

On the cosmodrome itself, and especially to the rockets of tourists are not allowed, but they allow you to look at its objects from the side. For many, this is a dream. A trip to the surroundings of the East takes about an hour.

At 2021 year from the East, they plan to launch the Angara-A5P heavy rocket for the first time with the new reusable Federation spacecraft, and 2023-and such a rocket should bring the Federation to the near-Earth orbit with astronauts on board. Observe the launch will be possible on one of the four observation platforms. Special tours are organized after the launch date is known. However, you can see the Eastern one even without a trip to the Amur Region - it's enough to get a two-thousand ruble note.
Tags: Cosmodrome Vostochny tourism museum Amur Region 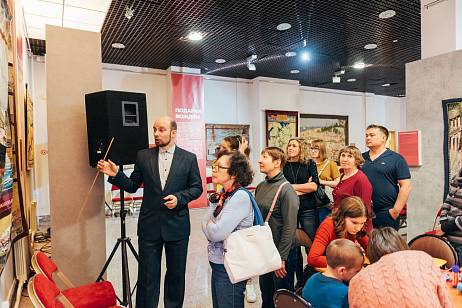